The Paris Climate Agreement and the Jobs Misunderstanding

President Trump cited “jobs” no fewer than 18 times in announcing his plans to discard the Paris climate agreement. The mantra presumably sounded good in coal country and struggling pockets of manufacturing in the Rust Belt. But a close look – or for that matter, a cursory one – suggests that job creation is not a plausible reason for jettisoning the Paris accord. To the contrary, Paris would have meant more jobs, not fewer.

Start with the reality that the U.S. economy is already awash in jobs in the sense that unemployment is at a 16-year low and many regional labor markets are tight. Nor is there any evidence that the global climate agreement, in place for over a year now, slowed the process. Check out the charts. Do you see even a hint of a before-after effect? 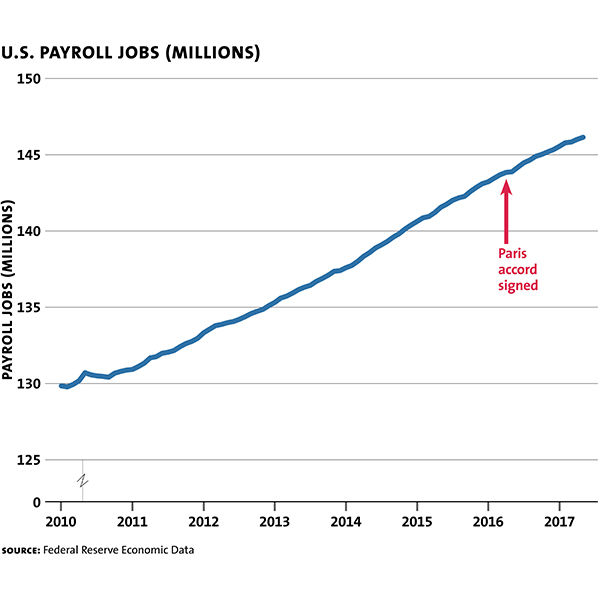 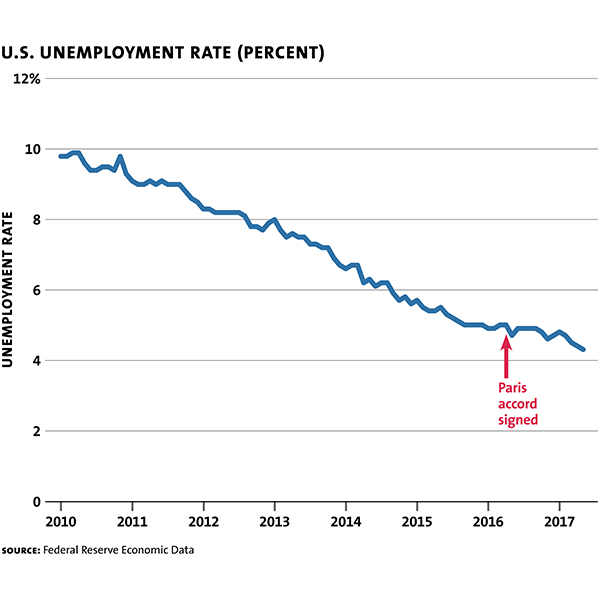 It’s no use saying that the Paris agreement is not yet fully in effect. Markets are smarter than that. Stock markets, job markets and goods markets all move on expectations that something good or bad will happen.

Ah, you counter. That low, low unemployment number masks a deeper labor market problem. Millions of apparently able-bodied workers have dropped out the labor force, either unwilling to settle for fast-food wages or unable to move to where better jobs are going begging. But those problems have been gnawing at the economy for decades. Getting into the Paris accord didn’t dim job prospects in Youngstown or Detroit. Getting out won’t brighten them.

Not so fast, you say. There may be plenty of burger flipping and fruit harvesting to do, but where are the $25 an hour (plus health insurance and pension) assembly-line jobs of yore — the jobs that kept whole families alive and well, and making timely payments on their F-Series pickups?

The president’s problem is not one of keeping or breaking promises, but of making the wrong promises. More people already work in solar power than in coal.

It’s true that many — though certainly not all — of those jobs are gone. Yet there is little evidence that President Trump’s vision of the way back — creating jobs in coal and other fossil fuel industries — is in any way better than creating green energy jobs that are increasingly replacing them. The president’s problem is not one of keeping or breaking promises, but of making the wrong promises. More people already work in solar power than in coal. And according to one recent study, the solar industry alone — leaving aside wind, biofuels, energy efficiency jobs and the rest – could absorb all workers released by coal as the industry gradually (but inevitably) shrinks.

Yes, some retraining would be required to turn coal industry operations engineers into solar panel manufacturing technicians. But the basic skill requirements are similar — and solar pays about 10 percent more. Even janitors in a coal facility would have pay boosts if they were retrained as assembly workers in solar.

It’s true that moving from job to job and from state to state in search of a job is not easy. However, barriers to labor mobility are not the fault of the Paris agreement. As I have written at length elsewhere, the fluidity of the labor market is suffering a death of a thousand cuts. A broken social safety net, a stumbling healthcare system, excessive occupational licensing, housing policy that gives short shrift to rentals and employer bias against ex-offenders all play a role.

Take health care, for example. “Job-lock” linked to employer-sponsored health insurance is one of the most serious barriers to labor mobility. Unless you are perfectly healthy, and sure you are going to stay that way, leaving an employer-sponsored health plan to look for a new job or start your own business is fraught with risks, both medical and financial. Yet the House Republicans’ bill, endorsed by the administration and pending in the Senate, would leave the dysfunctional system of employer-linked healthcare coverage virtually untouched.

Disincentives built into America’s social safety net are another source of barriers to labor mobility. Research by MIT’s David Autor and colleagues has shown that workers displaced by trade and technology shocks often end up receiving benefits in one form or another. And once they are on food stamps, Medicaid or housing assistance, they are trapped: if they get new jobs, the government takes their benefits away. Indeed, the effective tax rate in the form of benefit reductions can be as high as 100 percent for workers close to the poverty line. By no coincidence, almost no one receiving Social Security Disability benefits returns to the labor force.

What could be done about the work disincentives of the social safety net? A universal basic income would be one possible solution, but that would be a big step politically. Democrats have introduced bills to implement a less radical but quicker fix, through expansion of the Earned Income Tax Credit that increases incentives to work rather than undermining them.

But why just Democrats? Before the Freedom Caucus gained enormous leverage in the GOP, Republicans including Paul Ryan and Marco Rubio seemed prepared to put aside their dog-eared copies of Atlas Shrugged long enough to back the idea. Yes, an expanded EITC would cost real money. But so, too, would the cut in taxes for the affluent that is supported by Republicans. Maybe it’s time for the president to take another look at the alleged link between jobs and the Paris accord, and refocus his attention to where middle Americans’ bread is really buttered.

The “jobs” mantra just doesn’t make sense as a justification for abandoning our commitment to combating climate change.

I could go on and on, but you get the point. The “jobs” mantra just doesn’t make sense as a justification for abandoning our commitment to combating climate change. Not when unemployment is already approaching historic lows. Not when there are better policy responses to jobs lost in a dying coal industry — responses that make it easier for displaced workers to find new and better employment rather than preserving jobs that are no longer economically or environmentally viable.

Donald Trump needs to wake up and listen to his own words. Speaking in the Rose Garden, he said, “My job as president is to do everything within my power … to create the economic, regulatory and tax structures that make America the most prosperous and productive country on earth.” Amen. But let’s start with healthcare reform, labor market reforms and reform of the social safety net, not by abandoning American global leadership on climate change.