A review of Oceans of Grain: How American Wheat Remade the World 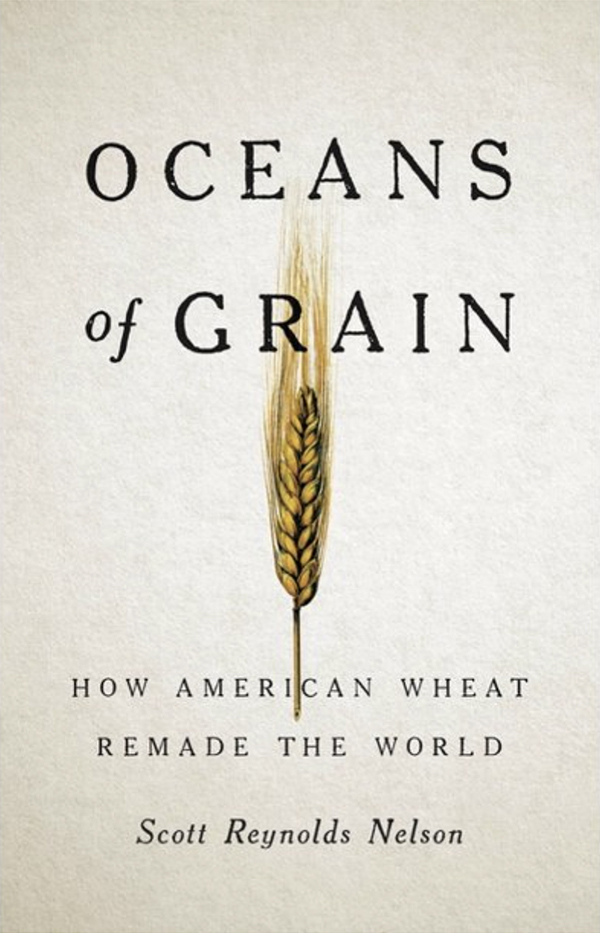 Oceans of Grain: How American Wheat Remade the World

“You cannot not know history,” said the American architect Philip Johnson. (Though he did successfully conceal his years as a young fascist demagogue in the 1930s, but never mind.)

The challenge of understanding Ukraine’s evolution is the sheer number and variety of nations and peoples who have played parts in its history — not only Ukrainian speakers but Crimean Tatars, Cossacks, Turks, Poles, Jews, Greeks (as owners of grain ships) and, of course, Russians. The condescending name for Ukraine, Little Russia, almost disappeared a century ago as the cultures differentiated, yet Vladimir Putin has shown how persistent and pernicious the idea has been of Ukrainians as junior siblings of the so-called Great Russians.

One of the best scholarly corrections of the record has Ukraine nowhere in its title, yet it is as enlightening about the history of that nation as it is about the development of the United States grain empire that is its main theme. It reveals that, in important ways, the U.S. and Ukraine have been swept along in intersecting currents of history.

In Oceans of Grain, Scott Reynolds Nelson shows how the territory of present-day Ukraine has been strategically essential since the days of ancient Greece, when shipping magnates called aristoi controlled the routes that brought grain from the northern ports of the Black Sea to the city-states of Greece that had outgrown their own agricultural hinterlands. The aristoi ships, which could carry a remarkable ten thousand sacks of grain, plied their trade into the 4th century and were largest seagoing vessels ever built until introduction of Spanish galleons in the 16th century.

The Black Sea grain trade remained a lifeline for European nutrition for a very long time. And Byzantium (the city also called Constantinople in honor of the emperor who established it as a new capital) effectively controlled that trade in the centuries it dominated the Eastern Roman Empire by controlling shipping through the Dardanelles Strait, the only outlet from the Black Sea to the Mediterranean. This power was, of course, inherited by the Ottoman Turks when they conquered the city in 1453.

Elsewhere in Europe, rulers remained acutely aware of the importance of a reliable grain supply to retention of power. Indeed, food riots contributed to the fall of Constantinople to the Turks. Hunger protests preceded the fall not only of Louis XVI of France but the Ottoman Sultan Selim III, although, to be sure, the causes were complex.

Britain, aware of its vulnerability, sought grain from its Irish colony to feed England’s growing cities beginning in the 17th century. Protestant landowners extracted grain from the Catholic peasants, who were left to subsist on potatoes (more calories, less nutrition per acre) from their small remaining plots.

Meanwhile in the Black Sea region, generations of Russian tsars nourished the fantasy of building an empire stretching from the Baltic to the Dardanelles, with Constantinople to be renamed Tsargrad (a name ominously adopted by a militantly pro-Putin Russian media group). Ivan the Great’s marriage to a niece of the last ruler of the Byzantine empire in 1472 founded a claim to succession of the Eastern Empire. It is also the origin of the Byzantine double-headed eagle so visible in Putin-era iconography. A century later, Russia’s rulers were chipping away at the Polish empire, which controlled the rich soils of what is now southeastern Ukraine. Though it’s not clear who to root for here: Poland had enserfed the Ukrainian-speaking peasants who farmed this land.

According to Nelson, the next moves in this game of thrones were taken by Empress Catherine II in the 18th century. Influenced by the French social-economic theorists called Physiocrats, Catherine the Great began to restructure Russian society around the further reduction of the rights of peasants, referring to them by the Russian word for slaves rather than that for serfs. Landowners now could buy and sell serfs, and force them to marry.

Inspired by the wealth that the Polish aristocracy had been reaping through river trade to Baltic ports, Catherine sought to build a new economy based on massive exports of grain. The goal was to help finance a mighty state through customs taxation and foreign exchange earnings, allowing the Russian empire to spread its tentacles ever further.

Previous regimes had looked inward for power; now Russia’s wealth was concentrated at its edges. The Black Sea port of Odessa (Odesa today) became the fourth largest city in the Russian empire and home to the world’s greatest concentration of grain exporters.

Oceans of Grain is world history at its best, challenging in its density of ideas but rich in insights. It goes beyond the rise of American wheat to reinterpret world history as an epic of control of the flows of nutrition.

A Tale of Two Wars

The turning point in the grain trade, by Nelson’s account, came with the two momentous military conflicts of the mid-19th century, the Crimean War and the American Civil War, which changed the geography of empire in ways that resonate to our own times. Tsar Nicholas I revived his ancestors’ ambitions of conquering the Ottoman Empire, ostensibly in a quest to be recognized as protector of all Orthodox Christians. (Sound familiar?)

Britain and France, dependent on grain passing through the Dardanelles Strait, came to the defense of the Sultan in a protracted and bloody conflict marked by incompetent leadership on all sides. Russia was the greatest loser, thanks to its poorly trained serf army. (Does that ring any more contemporary bells?) It emerged from war with a staggering budget deficit and little diplomatic leverage. Russia agreed in the 1855 Peace of Paris to the exclusion of its warships from the strait that provided access to the Mediterranean. Meanwhile, technology gave the British and French imperialists an unanticipated bonus: the shallow-draft steamships the British and French first used in the Crimean war became the prototypes of the gunboats that seized control of ports and rivers in Africa and Asia in their quest for empire.

Less than a decade later, the American Civil War brought an even greater transformation to the global political and economic landscape. But the dynamic had earlier roots, in the 1830s.

Nelson believes the moguls of the age, the builders of the transcontinental railroads, were the opposite of medieval robber barons — not taxing trade, but instead liberating it. They encouraged the settlement of free independent farmers on the grain frontier of the Midwest, creating customers for the railroads’ services and facilitating the explosive growth of grain exports to Europe. This served to counter the potent economic and political force of the American South, with its control of King Cotton — American wheat, after all, was needed to feed the European urban masses. Thus, you might say that the Republican Party of Lincoln was founded in spirit by 18th-century Physiocrats, who had already been admired by the authors of the Federalist Papers.

With railroads expanding the American agricultural frontier and subsidizing farmers to go west, countless European families emigrated. Indeed, many of the ships that brought grain across the Atlantic returned with their holds converted to primitive but relatively cheap passenger service. Southern rail development, by contrast, was stunted by the weakness of middle-class demand for goods in the slave economy.

One of many surprising sidelights (which are always highlights for me): After the two wars that undermined the strategic importance of Odessa, the influx of American wheat was multiplied by, of all things, Alfred Nobel’s introduction of dynamite. This stabilized form of the notoriously volatile explosive nitroglycerine enabled massive transformations of the earth’s landscapes. Nelson observes that it was dynamite that accelerated the expansion of Europe’s port gateways for American grain, as well as of the U.S. railroad network that supplied them.

Germany and France, which were also big grain growers, reacted to the influx of American grain with protective tariffs and railroad freight charges that paid for massive naval armaments and imperialist campaigns in Africa and Asia. Fatefully, the Russian, Chinese and Ottoman empires took another course, mortgaging their futures to foreign bondholders in return for ambitious infrastructure projects that brought them close to bankruptcy and assured their ultimate collapse after World War I.

After fomenting the independence of Ukraine from Tsarist Russia during the 1917 Revolution, the Bolsheviks violently suppressed Ukraine’s first whiff of sovereignty. Stalin’s first Five Year Plan, along with the forcible seizure of Ukrainian grain to feed Russian industrial workers, doomed millions of Ukrainians to starvation. In May 2022, the Russian invasion of Ukraine, with its interruption of the vital grain trade, risks countless more lives.

Oceans of Grain is world history at its best, challenging in its density of ideas but rich in insights. It goes beyond the rise of American wheat to reinterpret world history as an epic of control of the flows of nutrition.

One of the few topics that Nelson does not treat is the emergence of a cultural division between Russians and Ukrainians during the 19th century. In Russia, emancipated peasants formed self-governing communes (mir) with substantial collective powers. Individual landownership prevailed in Ukraine and in Belorussia (along with deeper economic inequality). Nineteenth-century Russian nationalist thinkers extolled the commune and conversely rejected Ukrainian private enterprise.

The Great Russian cannot imagine a life outside his society, outside the mir. The Ukrainian on the other hand sometimes says, “What belongs to all belongs to the devil.” … The Ukrainian reaches the idea of public welfare by taking as his starting point the exigencies of his individual rights, … [t]he Great Russian from the idea of public welfare deduces that of his rights.

Like all other generalities about national character, this one oversimplifies reality; today’s Russian oligarchs are individualists on steroids, and there is a strong collectivist side to Ukrainian society. But a contrast remains, one that encourages Ukrainian ties to the West and Russian nationalist antipathy to it. Oceans of Grain reminds us how material and cultural differences, magnified by government policies and accidents of technological change, can dissolve centuries-old bonds between peoples and foster new ones.