Can We Make Blue Hydrogen Greener?

by jay bartlett and alan krupnick

jay bartlett is a senior research associate at Resources for the Future, a Washington-based environmental think tank. alan krupnick is a senior fellow at RFF. This article is adapted from their post on the RFF blog.

Film enthusiasts who break out in a grin at the mention of The Graduate, Mike Nichols’s satirical commentary on the 1960s, no doubt remember the scene in which our new college grad (played by Dustin Hoffman) is told by a wise elder that his career prospects can be summed up in one word: “plastics.” If The Graduate were remade tomorrow, that one word might well be “hydrogen.”

Hydrogen’s claim to attention these days is tied to the idea that it is seen as a pathway to reducing greenhouse gas (GHG) emissions in sectors that are otherwise hard to decarbonize. Indeed, in a report last year, we considered the potential for hydrogen to decrease emissions in the industrial and power sectors — and how a tax credit could support the transition.

Yet, although the use of hydrogen does not result in GHG emissions, there’s a catch: currently, the production of hydrogen — mainly done by “reforming” natural gas (known as gray hydrogen, which predominates in the United States) or by coal gasification (known as brown hydrogen, which predominates in China) — pushes a lot of CO2 into the atmosphere.

It’s possible to beat the problem by producing green hydrogen using electricity generated by renewables like wind and solar or nuclear power. But there’s an alternative that has gained traction among energy planners: producing so-called blue hydrogen by capturing and then utilizing or storing the carbon dioxide (CO₂) emissions from gray or brown hydrogen. Here we take a closer look at the blue hydrogen path, which is riddled with potholes.

The Downside of Blue Hydrogen

The concept of blue hydrogen is becoming more familiar to the public — and not all they are hearing is good. A new study from Cornell University’s Robert Howarth and Stanford University’s Mark Z. Jacobson points out that blue hydrogen made from gray hydrogen yields GHG emissions far beyond the CO₂ created in the production plant. Most important, leaks along the natural gas supply chain allow significant amounts of methane (the principal component of natural gas that is a potent greenhouse gas in its own right) to escape into the atmosphere.

Because of these additional emissions, the researchers conclude that blue hydrogen may leave only a modestly lower GHG footprint than the gray hydrogen from which it is processed, and that using blue hydrogen for heating could, on balance, be worse for the climate than burning natural gas — or even coal.

Howarth and Jacobson are on the mark in focusing on the full life-cycle emissions of hydrogen production, since it is the only valid way of assessing its value in slowing climate change. However, we disagree with their bottom line for two reasons. First, the emissions of blue hydrogen should be compared to emissions from producing gray hydrogen rather than to emissions from producing and using natural gas or coal. Second, if more efficient methods and cleaner energy sources are used, blue hydrogen has the potential to generate considerably lower life-cycle emissions than gray hydrogen.

A major factor driving interest in decarbonized hydrogen is its versatility; hydrogen can potentially be used in the transportation, buildings, industrial and electricity sectors. However, using decarbonized hydrogen as a source of heat — comparable to natural gas or coal — must be seen in the context of other low-carbon options. For example, low-carbon heat for power generation or industrial processes can be provided by applying carbon capture, utilization and storage (CCUS) directly to fossil fuel combustion, and zero-carbon heat for industrial processes or residential and commercial building heating can come from renewables or nuclear power. Keeping these alternatives in mind, decarbonized hydrogen would need to be delivered at a very low price to compete as a heat source in the United States. And that would require substantial cost reductions that may only be possible for green hydrogen — and only many years down the road.

In contrast to the market for heat, the use of hydrogen as a raw material in oil refining and in ammonia production (ammonia is the principal ingredient in commercial fertilizer) has no practical near-term alternative. Decarbonized hydrogen is thus the only viable low-carbon pathway in these applications, and while green hydrogen offers a zero-carbon alternative, low-carbon blue hydrogen is currently much less expensive to make.

Consider, too, that the end products are identical for gray and blue hydrogen production. Thus, blue hydrogen can substitute seamlessly for gray hydrogen — there’s no need for new end-use equipment, such as hydrogen-burning turbines, which would be required for hydrogen to substitute for natural gas in heating and power applications. Consequently, the near-term financial viability of blue hydrogen in the United States is likely to remain concentrated in ammonia production and oil refining. So blue hydrogen is best compared with gray hydrogen when assessing life-cycle GHG emissions.

Happily, a closer look suggests that the life-cycle emissions from blue hydrogen production can be sharply reduced, making blue hydrogen a very attractive potential alternative to gray hydrogen in the aforementioned uses. Bear with us a moment to explain.

In Figure 1, we present the component and total emissions of gray hydrogen and blue hydrogen, initially using the assumptions of Howarth and Jacobson and then using alternative assumptions that enable further emission reductions. The component sources of GHG emissions include the following:

• CO₂ from the generation of electricity used to power carbon capture

• “upstream” CO₂ emissions for the production, processing and transportation of the natural gas used for reforming, process heat and electricity generation.

The numbers in Figure 1a present the analysis using a 20-year time frame — which Howarth and Jacobson prefer, to emphasize the importance of reducing near-term GHG emissions — while the more conventional 100-year time frame (as is used by the U.S. Environmental Protection Agency) is shown in Figure 1b. The two versions differ because methane is a far more potent GHG than CO₂ but remains in the atmosphere for far less time. 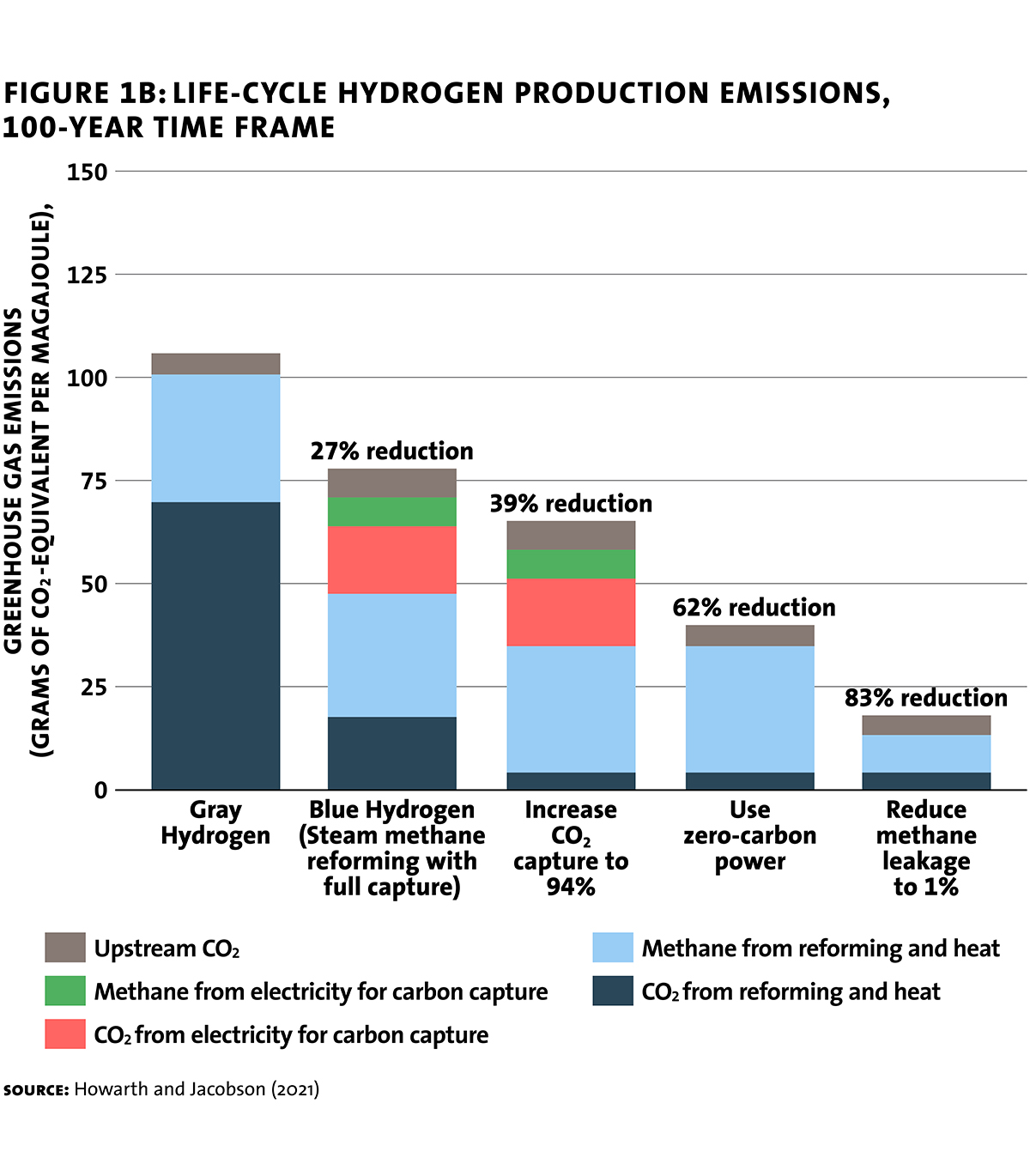 In the first and second columns, we recreate the calculations of Howarth and Jacobson using their default assumptions. Gray hydrogen emissions consist predominantly of the CO₂ generated on-site and the methane that has leaked along the natural gas supply chain. Column 2 shows the GHG emissions from an illustrative blue hydrogen facility that traps CO₂ emissions from both the reforming process and the combustion exhaust. This cleaner blue hydrogen facility captures 76 percent of the CO₂ generated on-site. However, methane emissions are unabated, and new GHG emissions arise from the use of electricity. In total, Howarth and Jacobson’s calculations imply that we’ve barely made a start on solving the problem. Blue hydrogen reduces the GHG footprint of gray hydrogen by only 12 percent over a 20-year time frame and 27 percent over a 100-year time frame in which the methane emission impact dissipates.

Thanks to fast-moving technology, we’re far from done, though. In Column 3, we increase the CO₂ capture rate to reflect a shift in the blue hydrogen production process, from steam methane reforming to an alternative technology called autothermal reforming, which allows for higher capture rates at lower cost. This is not pie-in-the-sky: the massive H21 North of England Project plans to employ autothermal reforming reactors projected to operate with a 94 percent CO₂ capture rate (compared to Howarth-Jacobson’s current-technology 76 percent).

In Columns 4 and 5, we turn to the problem of reducing GHG emissions from blue hydrogen from sources beyond the CO₂ generated at the production plant. Column 4 illustrates the impact of running the CO₂ capture process with zero-carbon-emission electricity (rather than gas-fired power), while Column 5 shows the potential benefit of reducing the leakage of methane emissions from the 3.5 percent rate assumed by Howarth-Jacobson to just 1 percent. That’s more than wishful thinking. The 45 companies in the natural gas supply chain that belong to the industry group ONE Future Coalition aim to achieve a 1 percent methane emission rate by 2025. Indeed, trades of low-emission natural gas are already taking place, and certifications of low-methane gas are taking off, fueled largely by demand from natural gas users, pressure from investors and corporate-rating agencies.

Regulatory pressure is also poised to grow. The European Union is preparing regulations that will require natural gas imports to be certified as low emission. Here in the U.S., Congress is considering clean-energy-standard legislation favoring the use of low-emission natural gas, while some states are already cracking down on methane emissions on their own.

Combining these three categories of change — a higher plant CO₂ capture rate, zero-carbon power and low-emission natural gas — the total reduction in life-cycle emissions for blue hydrogen relative to gray hydrogen is approximately 80 percent. Notably, this result holds whether we use a 20-year time frame or a 100-year time frame. In other words, blue hydrogen can have a significant climate benefit even over a short time horizon.

We doubt that such progress will be realized without substantial government incentives. That’s because the technical changes we envision will, at least in the short run, add considerably to the cost of making blue hydrogen. But such incentives would be relatively easy to construct. For example, Delaware Democratic Senator Tom Carper’s “Clean H2 Production Act” would require blue hydrogen producers to reduce life-cycle GHG emissions below target thresholds or forgo a higher subsidy — or any subsidy at all.

Although we have focused on blue hydrogen, concerns that the failure to properly account for life-cycle GHG emissions will push policy in the wrong direction are not unique to blue hydrogen. The leading alternative for decarbonized hydrogen, green hydrogen, is green only if the electricity used to separate H2O into hydrogen and oxygen is from zero-carbon sources. Electrolytic hydrogen using average U.S. grid power would result in CO₂ emissions that are approximately double the CO₂ emissions from gray hydrogen. Just as green hydrogen must be made with zero-carbon electricity to minimize emissions, blue hydrogen must be made with both zero-carbon power and low-emission natural gas to achieve a GHG footprint that’s less than 25 percent of gray hydrogen.

The potential emission savings from displacing gray hydrogen with efficiently produced blue hydrogen is nothing to sneeze at. The production of gray hydrogen emits nearly 90 million metric tons of CO₂ —roughly 1.7 percent of total U.S. CO₂ emissions. And that figure doesn’t, of course, factor in the impact of profligate methane emissions that are part of the life cycle.

One last important point. With technology moving rapidly, we cannot predict which form of decarbonized hydrogen — green hydrogen, low-emission blue hydrogen or hydrogen made with some other process — would be the most efficient means of displacing gray hydrogen. The smart way to move forward, then, is not to micromanage the transition but to create incentives that require life-cycle GHG emission reductions without constraining technology options.