Ask a hundred economists to explain the causes of the 2008 financial crisis and, chances are, 99 of them will point to the bubble in residential real estate that was fed by low interest rates, reckless lending and a maze of ill-regulated synthetic credit products. Their focus is not entirely misplaced, but the severity of the crisis and the deep recession that followed hint that other sorts of lending played a significant part, too. And in planning to avoid the next financial crisis, we ignore them at our peril.

Sleuths need look no further than the role of commercial real estate lending. During the Great Recession, bank concentration in loans backed by CRE proved to be the single best predictor of bank failures. Accordingly, with regulatory scrutiny over all but the largest banks about to ease, a closer examination of banks’ exposures to CRE is in order.

My analysis shows that changes in bank CRE lending practices have limited the risks they pose to the banking system. But limited is not a synonym for eliminated.

CRE concentrations at the bank level have risen significantly in the last five years: for many banks, this category of loans as a share of total assets is approaching the crisis peak or has already surpassed it. To be sure, the composition of banks’ CRE loans has shifted away from the riskiest category (construction loans) toward less volatile ones. But contrary to conventional wisdom, many communities remain vulnerable to CRE shocks — and many of them are dependent on small and medium-sized banks.

Drilling down a bit, it’s clear that banks’ exposures to CRE vary greatly among large and small banks and across U.S. regions. The balance sheets of medium-sized banks and smaller community banks are disproportionally exposed to CRE. Furthermore, with relatively small geographic footprints, such banks are especially vulnerable to conditions in local real estate markets in which there are few alternative sources for CRE lending. This implies that bank supervisors and regulators need to be more vigilant in overseeing CRE lending, and to refocus attention on medium-sized and smaller banks with concentrated lending in key local markets. Indeed, emerging threats to financial stability from CRE bubbles fed by excessive lending may be gathering at the local level.

Small and medium-sized banks (those with assets of $10 billion or less, and $10 billion to $100 billion, respectively) have been, and remain, the main players among banks in CRE lending; all told, they account for 62 percent of all CRE loans held by banks. Moreover, CRE lending makes up a large part of small banks’ balance sheets as a group, currently more than 30 percent, which is close to their crisis peak. And it represents 24 percent of the assets of medium-sized banks — a figure that actually exceeds the crisis peak. In contrast, at the largest banks ($100 billion-plus), which account for 70 percent of bank assets overall, CRE loans make up only 7 percent of total assets. 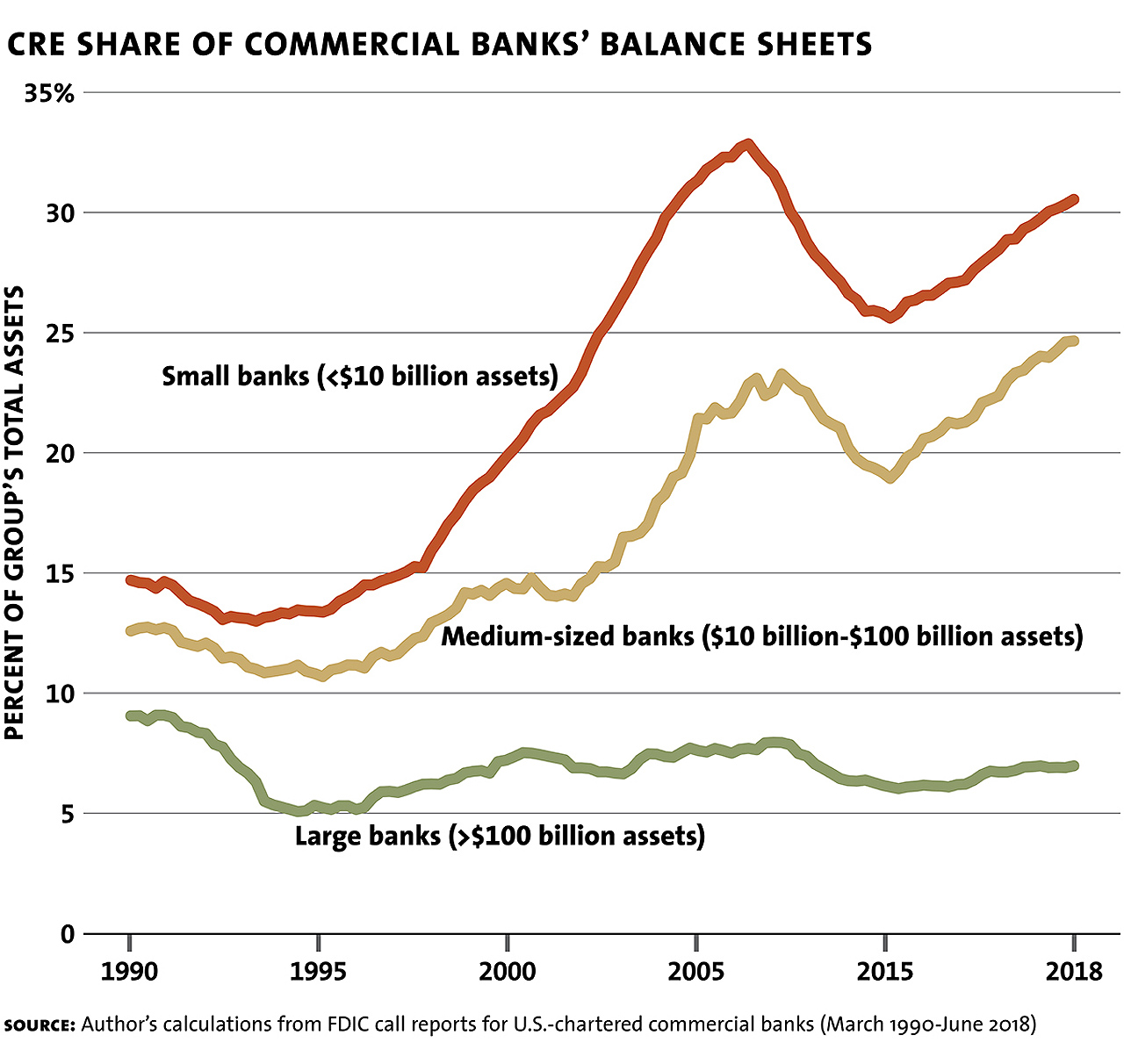 If we assess the exposure of individual banks, following the criteria in the guidance offered by federal regulatory agencies, 16.5 percent of medium-sized banks have high exposures to CRE (as of mid-2018), compared with less than 8 percent in early 2012. The share is still substantially lower than its 2008 peak, but is elevated enough to warrant continued monitoring of CRE concentrations at the individual bank level. 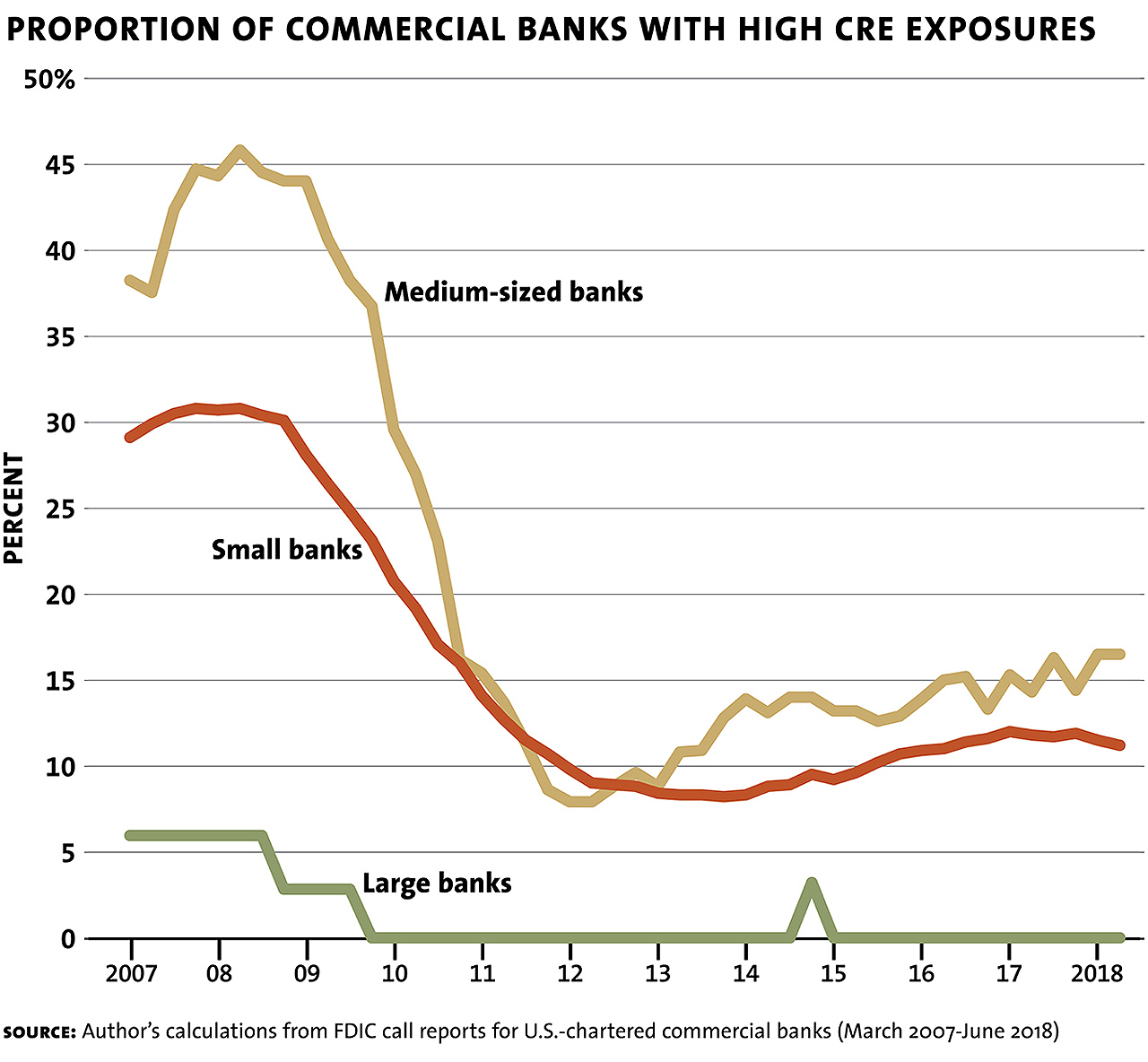 Medium-sized banks increased their exposure to commercial real estate both by running up their balance-sheet concentrations in CRE and increasing their leverage, eroding the impact of the substantial recapitalization they undertook in the years after the crisis. Among the medium-sized banks that are highly exposed (as of mid-2018), the least capitalized fifth of banks have total risk-based capital ratios below 11.6 percent, down from 13 to 13.9 percent in 2011-12. They are still better capitalized than were the comparable group of banks back in 2007-8. However, the mix of rising CRE concentrations and rising leverage underlines the need to monitor the composition of loan portfolios jointly with other areas of risk management. 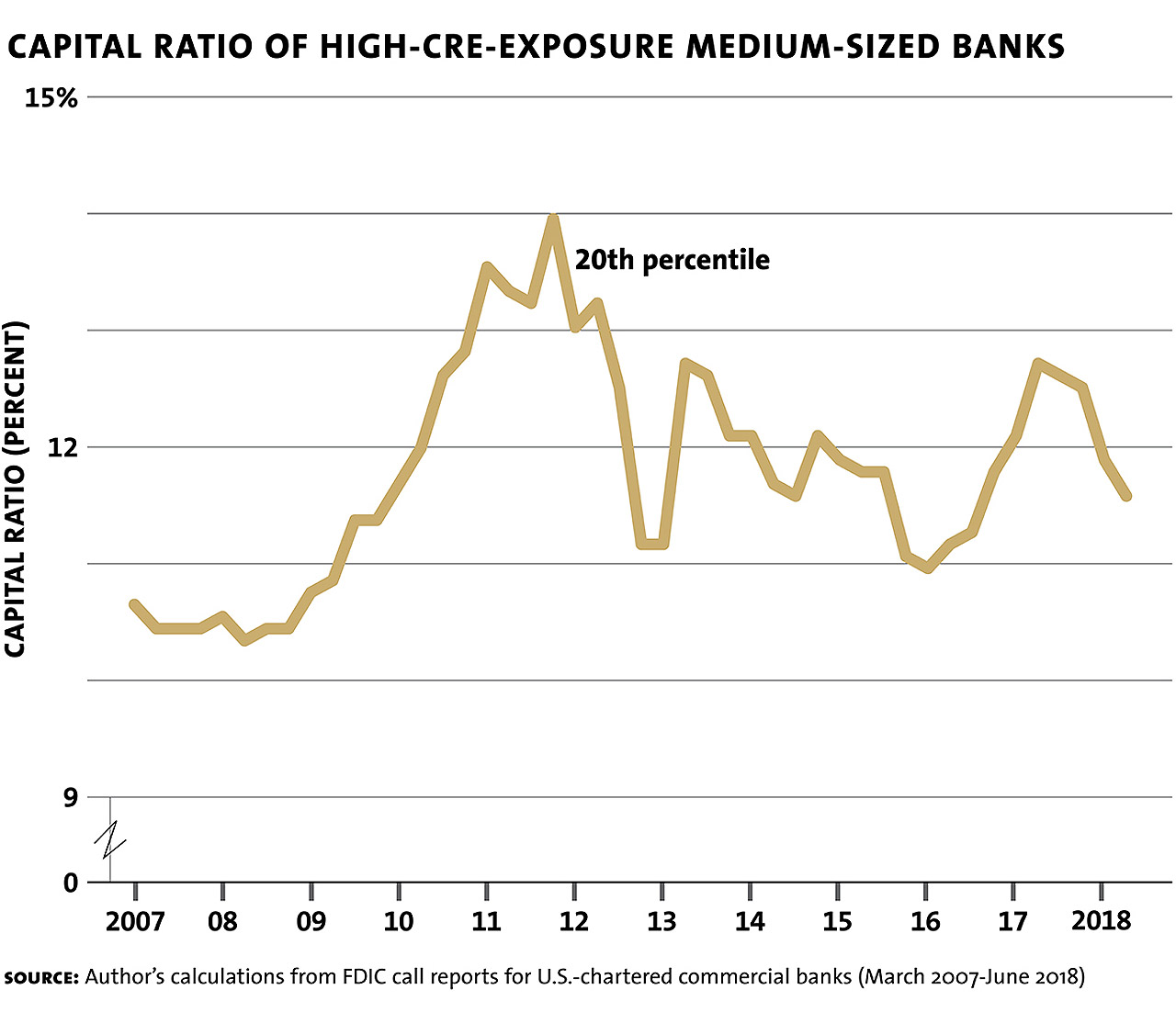 When Cre Exposure Leads to Failure

As previously noted, banks with high CRE exposures going into the crisis were much more likely to fail or be acquired by another bank. Roughly half the banks with high exposure at the time of the crisis no longer exist. Successful management of high CRE exposure requires the ability to adapt rapidly to volatile market and regulatory conditions. Indeed, over the last decade, the large changes in commercial real estate have induced drastic changes among surviving banks’ lending and risk management practices. In particular, a great majority of surviving banks with concentrated construction loan portfolios before the crisis moved quickly to jettison their exposure. And few of them subsequently raised their exposure to the high-exposure threshold. This means that a majority of banks that are now classified as having high exposure are not the same banks that were highly exposed in 2008.

What’s At Stake For Small Communities

Places dominated by small and medium-sized local banks may be at considerable risk in the event of a downturn in local property prices. Failed banks exiting these markets would deprive them of funding and could spread the downturn throughout the local economy. Larger cities and towns are at less risk both because they have more diversified banking outlets and because of the greater presence of large banks that generally have lower exposure to CRE.

Concentrated CRE balance sheets are generally found among smaller banks that are not systemically vital. But their failure may cause substantial shocks to the local economies in which they operate.

The consequences of the shift are not obvious on their face. On one hand, it reduced risk to the extent that banks are better able to assess property markets in their backyards than those far away; on the other, less diversification means that banks are more exposed to local shocks. And it turns out that the latter phenomenon dominates: in a 2016 paper, Martin Götz, Luc Laeven and Ross Levine found that banks’ geographic concentration tends, on balance, to increase risk.

Localities vary widely in their exposure to concentration-driven risk. A comparison of 2008 and 2018 shows that local banks in many places still have high exposures to construction lending, albeit in fewer places than 10 years ago. Local banks’ exposures to multifamily housing loans are still found in a limited number of places compared with the other types of CRE, but are spreading. In the case of commercial mortgages, the prevalence of local exposures has held steady, with some regional reshuffling.

Broadly, cities with riskier CRE-concentrated local banks tend to be less dependent on those local banks for access to funding other local economic activity. In part, that is probably because larger cities have more competitive credit markets, with medium-sized and large banks contending more vigorously with smaller local banks. It is plausible that local banks may adapt to such an environment by seeking out niches in which they have an advantage – in which case CRE would be an obvious candidate, given their advantage in assessing local market conditions. This would be consistent with Jeremy Stein’s 2002 theoretical model in which organizations shift from projects with “soft” information to those with hard information as they decentralize, as well as the model’s 2012 extension by Martin Götz in which a bank’s geographic expansion pushes its less geographically diversified competitors to specialize in lending activities based on soft information.

Smaller towns and rural areas that are not served by many banks — with those that do serve them having balance sheets highly concentrated in CRE — are most at risk. They are generally located in the middle of the country. In the great majority of these places, local banks are exposed to the nonresidential commercial and construction sectors, as opposed to multifamily housing, which is concentrated in large cities. Happily, these vulnerable places have become less numerous since the crisis, mainly due to competition from regional and national banks eroding high levels of dependence on local banks.

The continuing rise in the concentration of bank exposure to CRE loans is likely to be less risky than the similar rise before the crisis. Back then, the locally concentrated banks in more than half of U.S. cities were highly exposed to the volatile and cyclical construction sector. Many of these banks do not exist anymore — they failed or were absorbed by other banks in the wake of the crisis. Moreover, the survivors adapted by shifting their balance sheets from construction to less risky types of CRE loans.

That said, concentrations in CRE lending remain an important contributor to banks’ vulnerability and a key predictor of future bank failure. Fortunately, concentrated CRE balance sheets are generally found among smaller banks that are not systemically vital. But it’s still important to remember that their failure may cause substantial shocks to the local economies in which they operate.

There are countervailing forces at work. Bank failures among CRE-concentrated banks, aggravated by a lack of geographic diversification, may be balanced by the availability of other banks to fund local economic activity. Here, city size matters: larger cities are likely to be more resilient to CRE-related shocks to their local banks. In part, that’s because such communities have more nonlocal banks that are ready to pick up any slack. Thus, in identifying systemic vulnerability at the local level, it is important to pay attention to smaller communities that are more dependent on their local banks across a range of services.

Looking forward, outside sources of bank risk and vulnerability highlighted by regulators and supervisors include potential reforms to the government-sponsored mortgage backers (Fannie, Freddie, Ginnie) that push risk back to the private sector, shocks to CRE prices (especially if accompanied by a recession), and higher-than-expected inflation that induces rapidly rising interest rates. Change in the regulatory regime itself also generates uncertainty that may spill into bank CRE lending practices. With supervisors and regulators rapidly adopting a more relaxed stance toward small and medium-sized banks, the potential for CRE-related local crises will almost inevitably rise.

Thus, though there are many good reasons to reduce the excessive post-crisis regulatory burden placed on smaller banks, heightened vigilance with regard to their CRE lending is clearly needed.