shuting pomerleau is a climate policy analyst at the Niskanen Center, a Washington-based think tank.

As you are no doubt aware, greenhouse gas emissions affect the entire world while the regulations driving the decisions of the emitters are made at the national or even local level. Therefore, to mitigate climate change at a manageable cost and level the playing field among globally competing producers, policymakers must take into account the greenhouse emissions embedded in internationally traded goods. In particular, border adjustments are key to the effectiveness of carbon taxes (the market intervention of choice for most economists) when those taxes are not levied uniformly across countries. A border-adjusted carbon tax would incentivize consumption within a jurisdiction to shift from carbon-intensive goods to cleaner goods, regardless of where the goods are produced. All that is easier said than done, however: border adjustments can be complex, and, if designed poorly, won’t work as hoped or could violate international treaty obligations. Here, I offer a primer on why we will need carbon border adjustments (along with economywide carbon taxes) and how they might fit into the current geopolitical environment.

Border adjustments are needed to make carbon taxes practical for two reasons. First, to reduce the risk of carbon leakage from jurisdictions that tax emissions to ones that don’t, and second, to preserve domestic producers’ competitiveness with foreign producers who are favored by low (or no) carbon taxes.

Leakage is pretty much what it sounds like. A carbon tax that applies solely to goods made at home gives producers incentives to move their facilities overseas to avoid paying the tax. A border adjustment in the form of a tax on imports would equalize the tax burden between importers and domestic producers. Likewise, exporters would be exempted from the domestic carbon tax (hence receiving rebates) so they would have no emissionsrelated incentive to relocate their production overseas.

Of course, a border adjustment would not be necessary if there were a uniform global carbon tax levied on carbon emissions. That’s not about to happen for a variety of political and economic reasons. But if it did, a border adjustment would be an important mechanism to ensure that a unilateral carbon tax is effective in addressing emissions in internationally traded goods.

Border adjustments are not new and are, in fact, used fairly widely in other types of taxes. Take, for example, value-added taxes, which are consumption taxes imposed on each stage of a product’s production. Valueadded taxes are currently implemented in virtually every advanced economy and are border-adjusted based on where goods and services are consumed.

The United States does not have a national value-added tax, but its state and local sales taxes are based on the same principle. Goods sold to consumers in, say, New Jersey, are subject to the sales tax, but goods made in New Jersey and sold to Coloradans are only subject to Colorado sales taxes.

Congress has occasionally considered more ambitious border adjustments. In 2016, House Speaker Paul Ryan and Representative Kevin Brady, chair of the House Ways and Means Committee, floated a border adjustment proposal as part of the Republican lawmakers’ attempt to reform the tax code. It would have changed the corporate income tax from production-based to consumptionbased, levying a tax on imports and providing a rebate for exported goods. 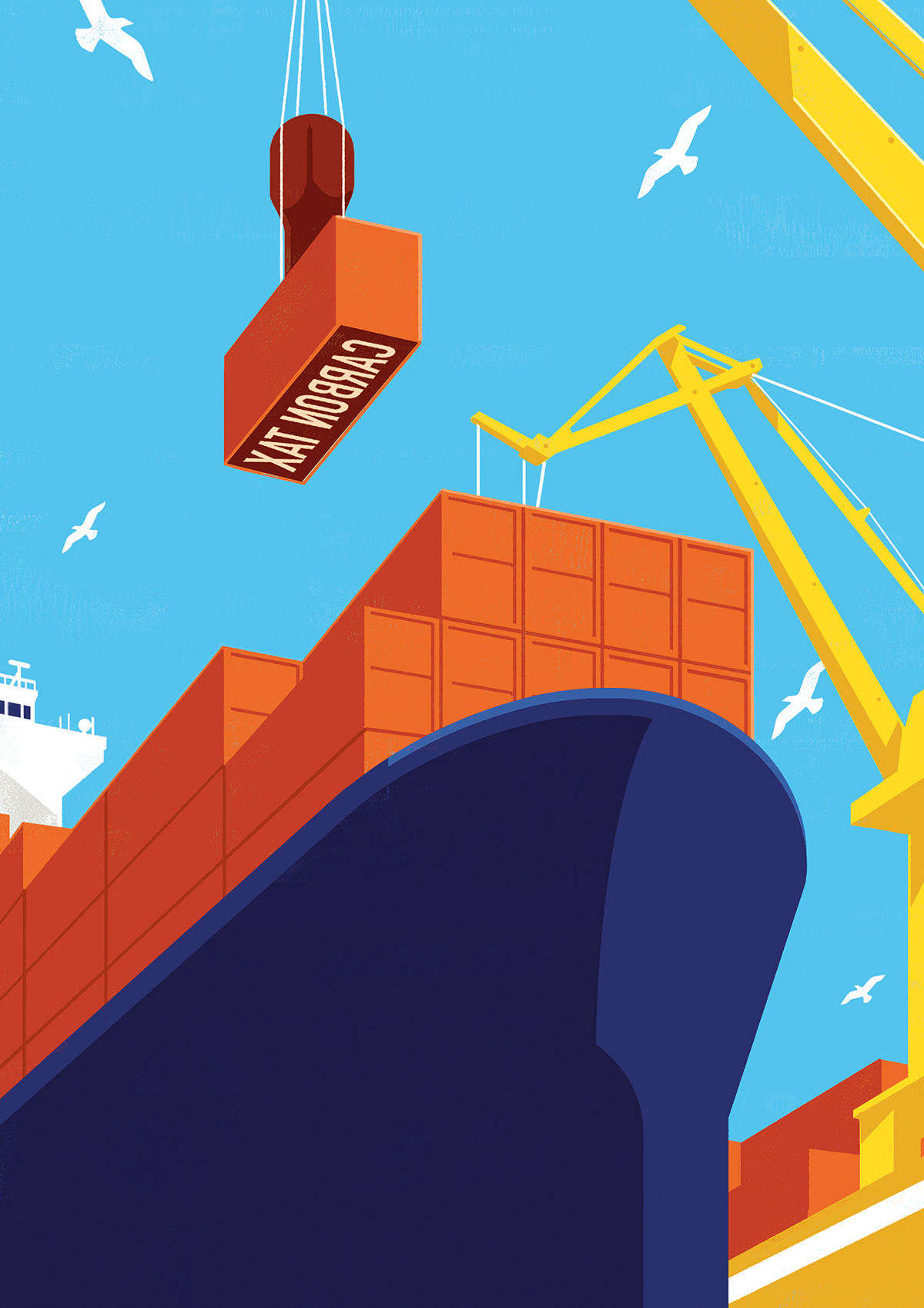 Misunderstandings of border adjustments as an interventionist trade policy are common.

Alan Auerbach, an economist at the University of California, Berkeley, who has been dubbed the father of the border adjustment tax, championed the GOP’s 2016 border proposal. Border adjustments, he noted, are not intended to distort trade flows in favor of the home team. Auerbach argued that “unlike tariffs on imports or subsidies for exports … they are paired and equal adjustments that create a level tax playing field for domestic and overseas competition.”

It’s vital to note that for a carbon border adjustment to work as intended, it should only be implemented alongside a domestic carbon tax. The U.S., for example, does not have an economy-wide carbon tax. So, any carbon border adjustment proposal that seeks to levy a tax on imports but does not include a domestic carbon tax would tilt the market in favor of domestic producers. And this would amount to protectionism by another name.

Where Does the WTO Fit In?

It is possible to design a border-adjusted carbon tax that can thread the World Trade Organization’s regulatory needle. The WTO determines the acceptable justifications for its members to levy tariffs and prohibits its members from subsidizing exported goods. However, the WTO does allow countries to implement border adjustments based on where goods are consumed.

Accordingly, Jennifer Hillman, a professor at Georgetown Law School and a former member of the WTO’s Appellate Body, concluded in a 2013 analysis that a border adjustment under a carbon tax would be legal under the WTO rules if two conditions were met. First, the domestic carbon tax must be assessed as an indirect tax on products based on their carbon emissions, as opposed to a direct tax levied on producers based on, say, their profits or revenue. Second, the import taxes and export rebates under the border adjustment must not give undue competitive advantage to domestic producers.

But what about border adjustment proposals that don’t comply with the WTO law? Some policy analysts argue that addressing the existential crisis of climate change justifies the violation of WTO rules. I don’t find this argument convincing, though. WTO rules may not be perfect, but they are key to generating the enormous gains from trade realized today and are thus critical for driving global economic growth and prosperity. Equally to the point, Hillman and many other experts believe that with careful design, it is possible to create WTO-compliant carbon border adjustments.

That said, it is not a simple task to design a border adjustment to go with a domestic carbon tax. Note that the carbon emissions associated with the production of, say, a microwave oven or a box of Oreos need not be known directly when levying a domestic carbon tax. Indeed, one great appeal of carbon taxes as a means of reducing emissions is that they can be levied upstream on a relatively small number of companies, such as fossil fuel producers and refineries. The taxes are then passed on to consumers through increased product prices. By contrast, it is a challenge to determine the carbon emissions associated with a specific good produced by a specific company for the purpose of calculating the import tax or export rebate under border adjustments.

To implement a carbon border adjustment, policymakers would need to address some difficult questions. In particular, how are the specific goods in question made when production could take place with more or less carbon-intensive technologies? And what about specific goods from an individual company that might come from either a factory in, say, China or from one in Turkey? Would calculation and enforcement require a huge bureaucracy? Would it create incentives for fraud or tax evasion?

A functional border adjustment under a carbon tax requires many smart design choices. But among them, two stand out. First, a carbon border adjustment should cover as many goods as possible. Ideally, all goods and services should be border-adjusted based on the carbon emissions linked to their production. Generally, a broad-based tax is better than a narrow-based one because the former creates fewer distortions and incentives for tax avoidance or evasion than the latter. But it would be administratively challenging and costly to implement an economy-wide border adjustment before product-level carbon measuring becomes common practice.

A border adjustment should cover as many goods as possible. Ideally, all goods and services should be border-adjusted based on the carbon emissions linked to their production.

Existing carbon border adjustment proposals typically cover only a narrow base of carbon-intensive upstream goods, such as aluminum or steel. It would be reasonable to start with a pilot phase of a narrow-based border adjustment, but ultimately policymakers need to extend the coverage to a broad base of goods.

Second, border adjustments should be applied equally to all trading partners. It is often argued that if producers already pay a carbon price in their home countries, they should be fully or partially exempted from the border adjustment to avoid double taxation. However, this design feature is problematic for a variety of reasons.

Treating trade partners differently would violate WTO’s non-discriminatory rule. There is an exception in the rules that allows for differential treatment on grounds of environmental or human health protection. But it is very difficult to meet this exception’s criteria.

Administratively, it is a daunting task to determine the right level of exemption for a specific producer’s specific product based on the country of origin’s domestic policies. From the perspective of tax collection, providing a full or partial exemption to importers based on their countries of origin would sacrifice some of the revenue to foreign governments.

The State of Play

According to the World Bank’s Carbon Pricing Dashboard, as of April 2021, there were 27 jurisdictions around that world that had implemented a carbon tax at the national level. None of them border-adjusts their carbon taxes. As countries are implementing economy-wide carbon taxes, they will need to address both carbon leakage and the competitiveness of domestic producers.

The European Union, the United States and Canada are currently considering some form of a carbon border adjustment as part of their climate policies. The EU unveiled its official carbon border adjustment mechanism (CBAM) in July 2021. CBAM would extend the EU’s emissions trading system (a cap-and-trade system largely equivalent to a carbon tax) to cover imported goods in several carbon-intensive sectors, including steel, cement and aluminum. Importers of covered goods will be required to start paying for emissions by buying certificates to emit by 2026.

Meanwhile, Democratic lawmakers in the United States have floated a “polluter import fee” that has been referred to as carbon border adjustment in media reporting and press releases. It would levy a tax on imports across several carbon-intensive sectors to protect the United States’ competitiveness and incentivize trading partners to cut carbon emissions. Canada is currently exploring a carbon border adjustment to be paired with its federal carbon tax.

Note that neither the EU nor the U.S. proposal is truly the sort of border adjustment I’ve been describing. Both proposals focus on the import side, levying a tax on certain carbon- intensive goods; neither addresses the export side. If rebates are not provided for exported goods, as discussed earlier, domestic producers will have an incentive to shift their emissions to other countries.

Leaving aside the issue of administrative feasibility, the EU proposal is more in the spirit of a carbon border adjustment than the U.S. proposal. After all, the EU emissions trading system, which shares most of the characteristics of a carbon tax, has been in place for more than two decades. Since there is no federal-level carbon price in the United States, there is nothing to adjust at the borders of the United States.

Border adjustments will be a must for sustaining an efficient global trading system in an environment in which climate change looms but individual countries control their own climate policies. It would not be easy – but would definitely be possible – to develop a WTO-compliant and effective carbon border adjustment to address emissions embedded in international trade.