Most Americans are at least vaguely aware that the nation is "browning" due to the rapid growth in numbers of Hispanics, Asians and multiracial Americans, along with the more moderate growth of blacks and other non-white groups. What is not often appreciated outside global cities like Los Angeles, New York and Miami is how quickly the shift is taking place. The Census Bureau tells us that in about 30 years, whites will no longer be the majority.

This rapid spread of racial diversity is occurring generationally from the younger ages upward, as well as geographically inward from former melting pot regions to the rest of the country. Minorities are now a majority in the nation’s public schools. And in less than five years, whites will comprise less than half of the under-30 population.

Two factors are driving diversity up the age range. First, there's rapid growth of young minorities, especially Hispanics, due to past immigration and now mostly high fertility. Second, there’s the rapid aging of white America. Between 2015 and 2030 there will be an absolute decline in the size of the white population under age 65. And even among seniors, racial minorities will begin to gain.

The next 15 years will also see a broad geographic dispersion of racial minorities. Projections for all 50 states that I prepared with Ruy Teixeira and Robert Griffin suggest that diversity will be spreading inward from melting pot states like California and Texas which, along with Hawaii and New Mexico, are already home to more minorities than whites.

The continued dispersion of Hispanics and Asians to the Mountain West and South, along with the steady movement of African-Americans to prosperous southern states, will give rise to seven new "majority minority" states by 2030 (Florida, Georgia, Nevada, Arizona, Alaska, New Jersey and Maryland). What's more, a slew of states in the Sunbelt and beyond (including New York and Illinois) will become home to at least 40 percent minority populations. 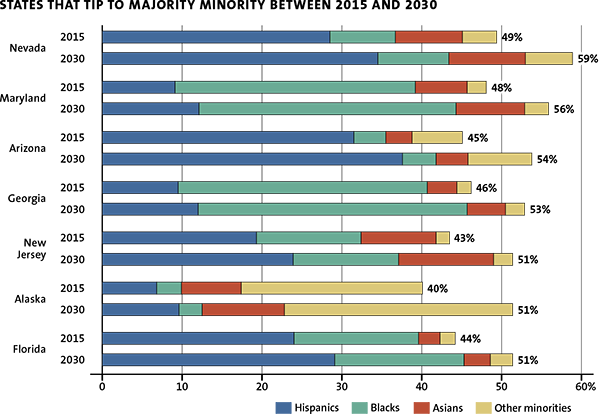 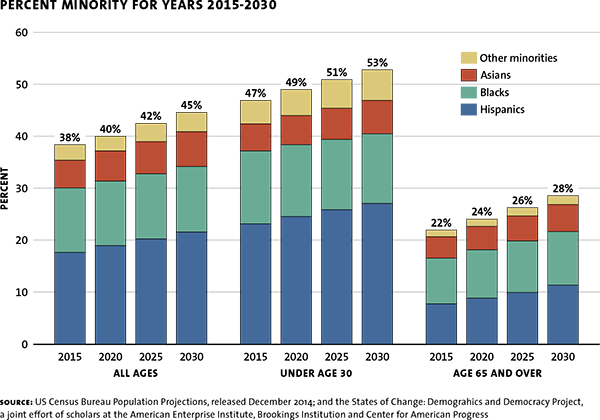