The giant ship is slowing: the 2020s are beginning on the heels of a decade of demographic stagnation. Annual U.S. population growth through mid-2019 — the last period with all the numbers now in place — was a mere 0.48 percent, which is the lowest rate since 1918. This caps off a decade that should show the slowest 10-year growth since the first census was taken in 179

But “slow” is not a synonym for inconsequential. The underlying population dynamic has major implications for the economy, polity and society that will become increasingly clear in coming years.

What We Know Now

The latest numbers from the Census Bureau update annual population statistics through June 2019, nine months before the 2020 census is to begin. They offer a final projection on what the census will show for 2010-20 growth broken down by state, and thus a projection of the reapportionment of congressional seats that will follow. Additionally, the new numbers include annual estimates looking backward that allow one to track the trends accounting for the decade’s shifts, some of which are likely to continue.

Highlights include ongoing growth in the Mountain West and Southeast states at the expense of the Midwest and Northeast, as well as an absolute decline in the country’s under-18 population. All told, four states (West Virginia, Illinois, Connecticut and Vermont) are home to fewer people than a decade earlier. And while California’s population is still growing, it’s still likely to lose a congressional seat, since a mix of slowing immigration and the high cost of housing has taken some of the shine off the Golden State.

The figure below shows national population growth rates for 10-year periods between the first U.S. census (in 1790) through projected results for the 2020 census. The 7.1 percent figure for 2010-20 is lower than any previous decade, even including the Great Depression years of the 1930s, when most Americans feared (with justification) that they wouldn’t be able to support children. And it is not much more than half the growth rate of the 1990s, a period of rising immigration and births. 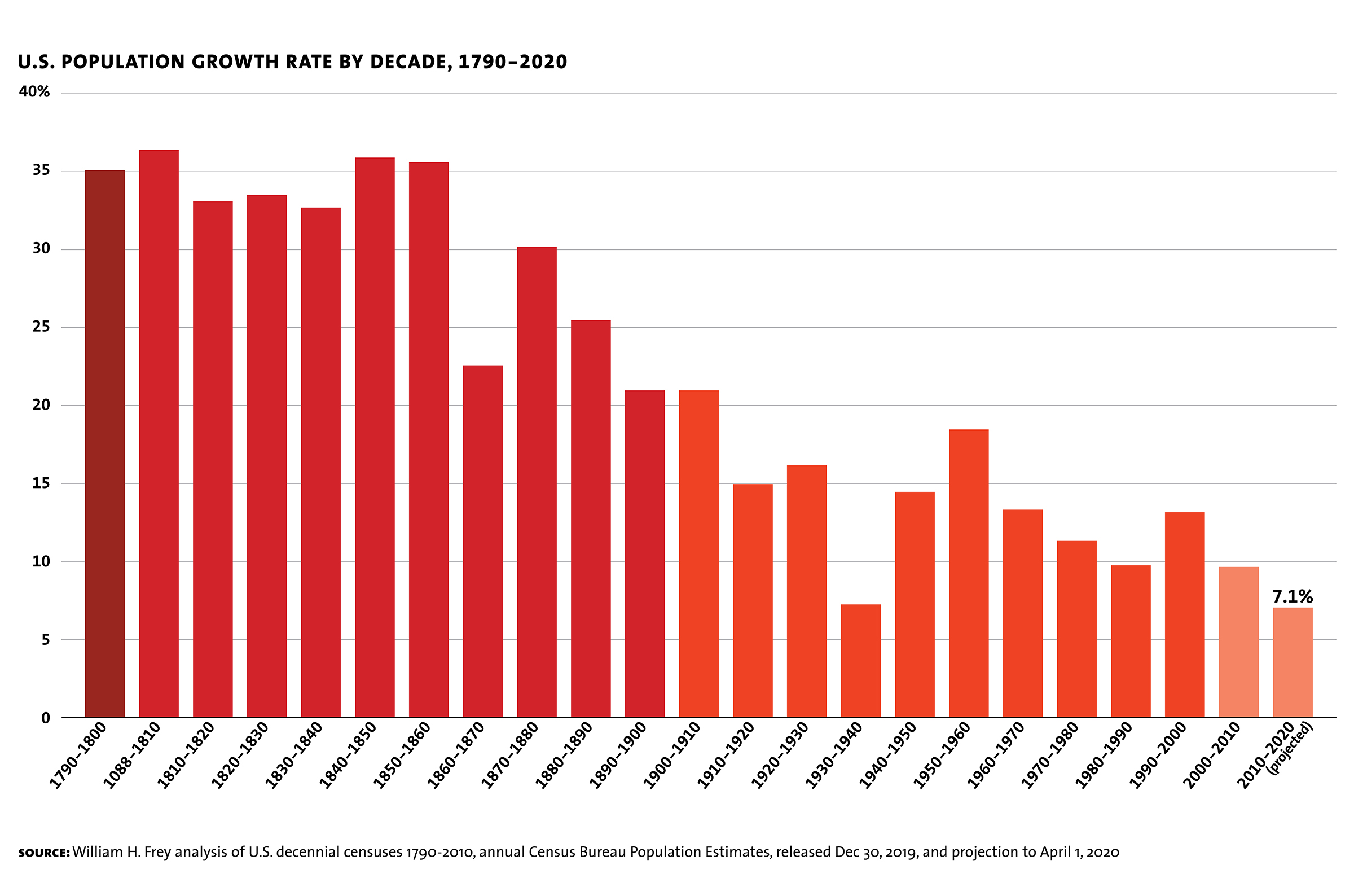 The 2010s was a decade of fewer births, more deaths and uneven immigration. As noted above, population growth in the 2018- 19 period was an exceptionally low 0.48 percent, with immigration declining to 595,000 people (the lowest level since the 1980s) and a drop in natural increase to less than one million. While immigration may have been unusually low due to recent federal restrictions that led to a decline in the non-citizen foreign-born, relatively low natural increase levels are likely to persist due to the aging of the population. 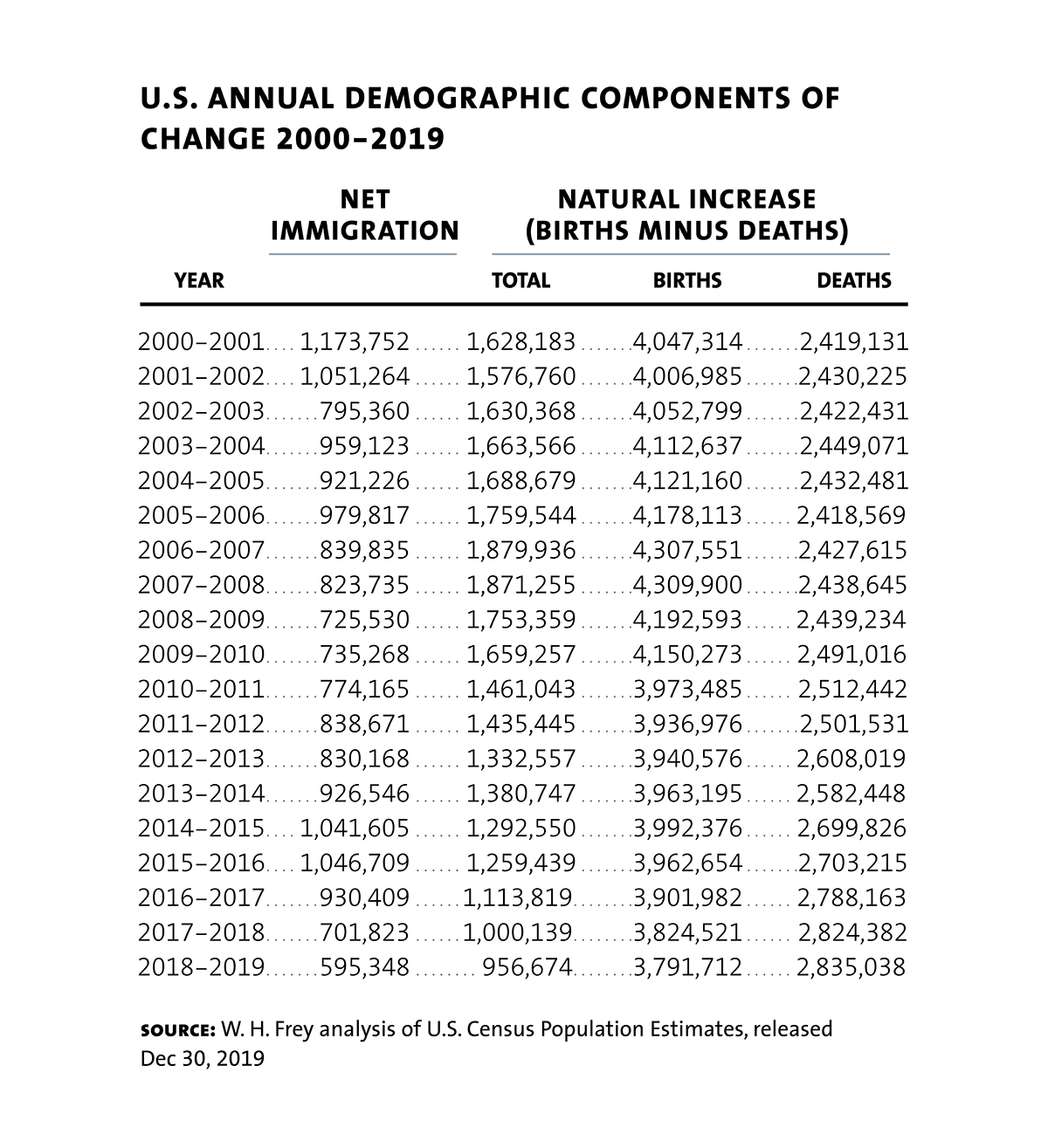 One cause of the pronounced population aging across the decade is the decline in people under age 18. Between 2010 and 2019, the nation sustained an absolute decline of 1.14 million youth. Some of this change can be attributed to lower fertility rates and the aging into adulthood of the last of the millennials (born 1981-1996). However, overall, census projections suggest that older populations — especially those over age 65 — will also display far higher rates of growth than youth largely because there are a lot of baby boomers in the pipeline. Thirty states experienced decadewide declines in youth population, led by California, with a loss of 400,000. In contrast, Texas, a state with high migrant gains over the period, added more than 500,000 young people.

State growth over the past decade shows striking regional variations that favor the West and South. Despite sluggish national growth, seven states and the District of Columbia should grow by more than 15 percent. Five of these — Utah, Idaho, Nevada, Colorado and Arizona — are located in the Mountain West. Southern growth magnets Texas and Florida round out this group. 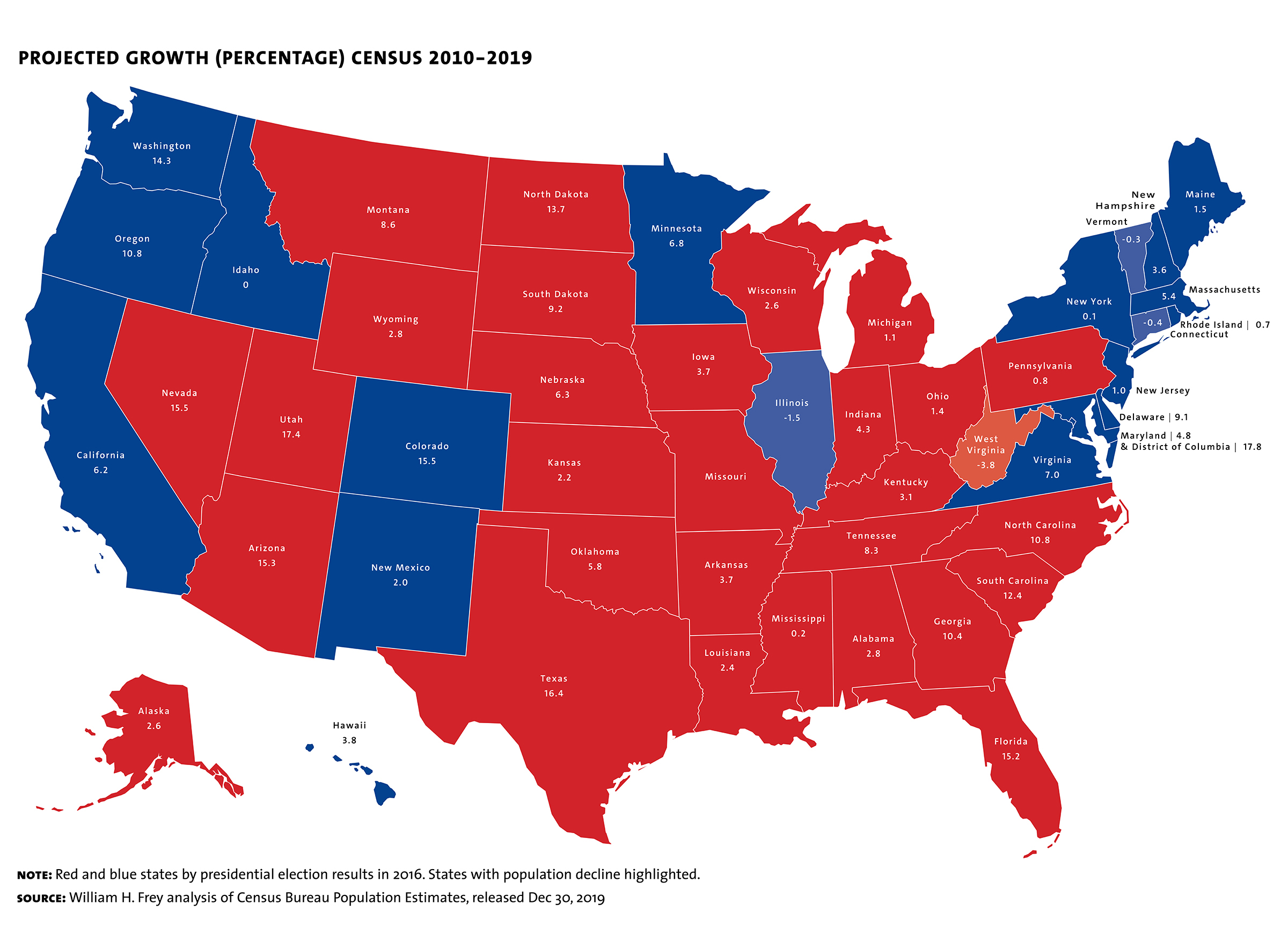 Two West Coast states (Washington and Oregon) and three Southeastern states (North Carolina, South Carolina and Georgia) each showed a 10 percent gain over the course of the decade — as does one Midwestern outlier, North Dakota, which profited from an earlydecade energy boom.

A middle tier of states, growing between 5 and 10 percent, is spread around the country. These include Massachusetts, Virginia, Tennessee, Oklahoma, South Dakota, Minnesota, Nebraska, Montana and California. California, for its part, saw diminished growth and increased domestic out-migration over the decade. This led to larger late-decade gains in other states, especially in the West, where housing and labor markets picked up as they recovered from the Great Recession. 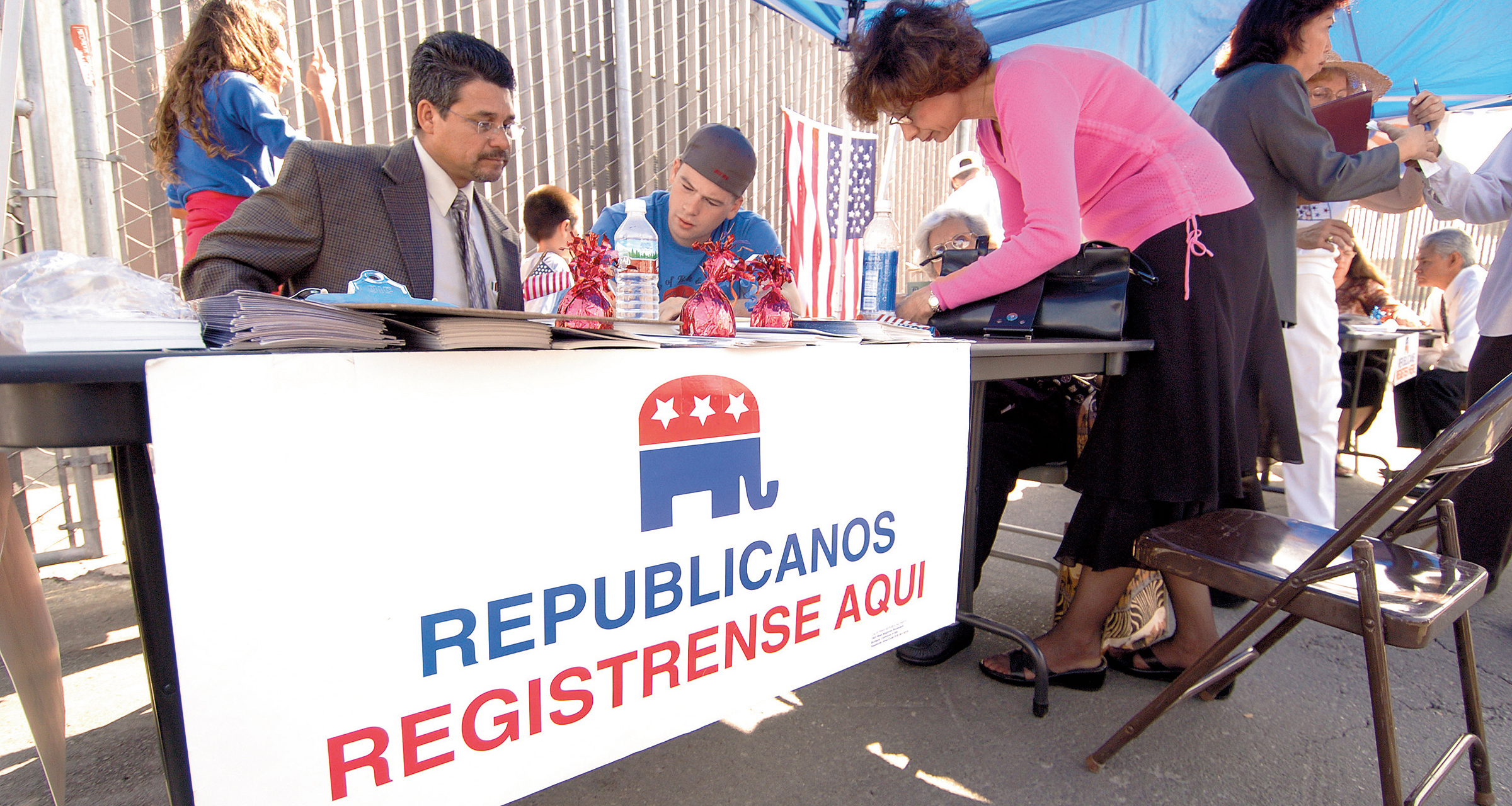 The remainder of the states grew slowly or even shrunk. West Virginia lost residents for seven years running through the end of the decade. Illinois and Connecticut did so for six years, while New York lost population for four years.

By the last few years of the decade, three large states — California, New York and Illinois — saw the biggest domestic out-migration to other states. This signaled a population shift from highly urbanized locales to other parts of the country driven, on the one hand, by increasing differentials in housing costs and, on the other, by the availability of jobs.

The constitutionally mandated purpose for the decennial census is to apportion seats in the House of Representatives across the states based on population. And some states gain seats at the expense of laggards — even laggards that are still growing in absolute terms.

Two states, Texas (+3) and Florida (+2), will gain multiple seats, while five others (Arizona, Colorado, Oregon, Montana and North Carolina) will gain one each. These gains will come at the expense of 10 states projected to lose one seat each (apportionment is, after all, a zero-sum game). The most noteworthy of the losers is California, which has never lost a House seat via reapportionment before. Other states projected to lose seats are located in the Midwest and the Northeast (Pennsylvania, New York and Rhode Island) and economically depressed parts of the South (West Virginia and Alabama).

Since reapportionment also affects the Electoral College, this one might be seen as favoring Republicans, since the states gaining more seats voted for President Trump in 2016. However, a good part of recent population growth in Texas, Florida, Arizona and North Carolina should continue to be from Democratic-leaning Hispanics, African- Americans and Asian-Americans. Thus, it is difficult to predict the decade-long political ramifications of the 2020 census’ congressional reapportionment.

While the impact of the internal slosh of population on presidential elections is unclear, the overall slowdown in population growth is bound to have a telling socioeconomic impact. It’s virtually certain that two factors contributing to the slow growth in the 2010s — slipping fertility and an increase in deaths — will continue, as both are associated with an aging population.

Note, moreover, that as the still-large baby boomer population ages into retirement, their dependence on young workers will increase. And the greatest source of growth in the young population will be immigrants and the children of immigrants. Indeed, the Census Bureau projects that after 2030, immigration will account for more than half of the nation’s population growth.

Like it or not (and happily, a majority do seem to like it), immigrants will become an increasingly important source of enterprise and innovation in the American economy — not to mention a vital source of semi-skilled labor to care for a rapidly aging population.

This period of immigration-bashing will probably prove to be an ironic footnote to a transition in which immigrants will once again revitalize American society.