Does economic freedom correlate with social progress? Not long ago I ran across an analysis by Peter Leeson, then at the University of Chicago and now at George Mason University, that took an empirical approach to answering a big-picture question rarely engaged by economists. Leeson used the Economic Freedom Index (EFI) from the libertarian Fraser Institute in Canada, along with independent data on average income, life expectancy, years of schooling and political liberty, to conclude that people really do live better where governments exercise less control over the economy.

But Leeson’s research is several years old now, so I thought it would be worth updating using recent data. I added a new and broader set of development indicators, the Social Progress Index (SPI), provided by the Social Progress Imperative to the mix. Here’s what I found.

First, a word about the data. The Economic Freedom Index has five major components: the size of government (note that a high score means less government), the institutional strength of the legal system and property rights, the soundness and stability of the monetary system, openness to trade, and the reach of regulation and red tape. The EFI as a whole is an unweighted average of the five component scores.

The Social Progress Index, for its part, has three major components.

The EFI covers 159 countries and the SPI 133 countries, with the two indexes overlapping in 128 of them. I expected to find economic freedom to be positively associated with social progress, and that’s just what a scatter plot of the SPI against the EFI suggests. 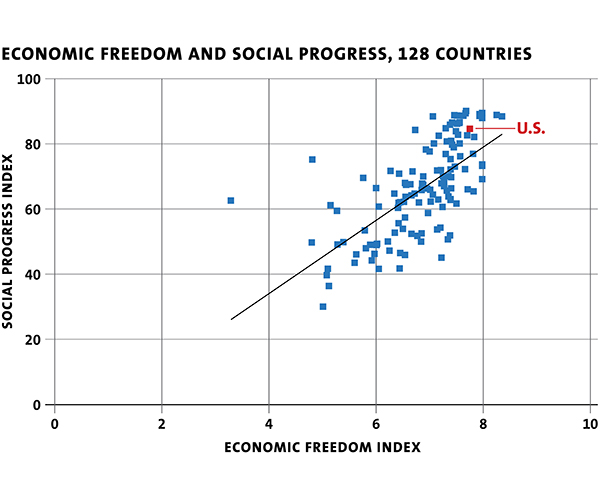 The highest SPI score belongs to Finland, the lowest to Chad. The highest EFI score goes to New Zealand, the lowest to Venezuela. (The Fraser Institute awards even higher EFI scores to Hong Kong and Singapore, but the SPI does not cover those countries.) The United States, it’s worth noting, is among the leaders on both scales.

The next logical step is to look at the relationships between the SPI and individual components of the EFI. That is where things get interesting. Here are the relevant correlations. (A coefficient of 1 is perfect, positive correlation; 0 means no statistical relationship; a negative score means negative correlation.) 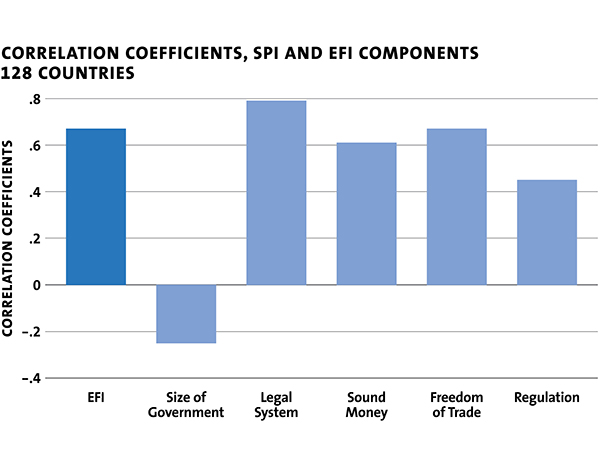 What is striking here is that the legal system, freedom of trade and sound money account for almost all of the positive correlation between the SPI and EFI as a whole. The contribution of the regulation component is significantly weaker, and, most striking of all, the correlation between small government and social progress is actually negative.

What is going on? I tried dividing the sample into two groups. The first consists of 35 members of the Organization for Economic Co-operation and Development (OECD), all democratic middle- and upper-income countries. The other consists of 93 non-OECD countries. Here are the correlations: 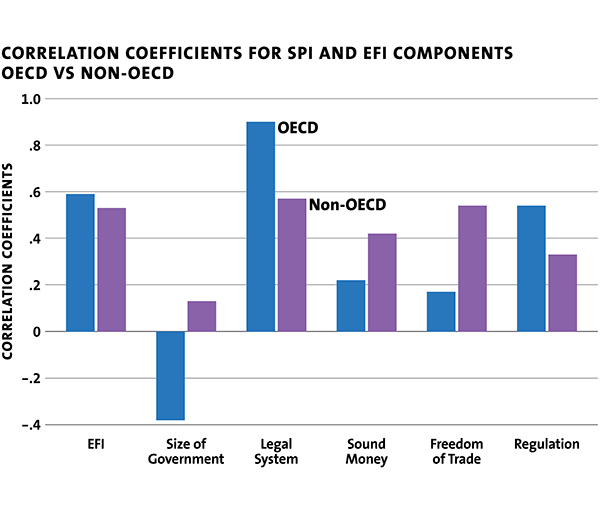 The unexpected positive relationship between big government and social progress comes entirely from OECD countries. (Remember: a high score for size of government indicates a smaller government.) With wealthy countries, those with larger governments and higher taxes seem to do a better job at providing healthcare, education, sanitation and the like. That appears to be less true – or not true at all – in developing and non-democratic countries, where small government is associated with social progress, albeit weakly.

We also see that within the OECD, the strongest correlation with the SPI is for the component that measures the contribution of the legal system and property rights. Sound money and freedom of trade, on the other hand, show stronger correlations for the non-OECD countries than those in the OECD. That does not necessarily mean, though, that those aspects of economic freedom are unimportant for high-income countries. Rather, it may simply be that all OECD countries have open economies and stable monetary policy, so that statistical analysis does not capture the impact of these institutions very well. By contrast, these features vary widely in developing countries, so their effect shows up more clearly.

Is there a big-government Kuznets Curve?

The differences between OECD and non-OECD countries shown here raise another issue. Is it possible that some of these indicators – especially size of government – relate to the SPI and its components in a “non-linear” way? In particular, is it possible that there is a so-called Kuznets curvefor the size of government? Economists use that term to refer to an inverted-U pattern, in which some indicator reaches a maximum for middle-income countries and has lower values for both richer and poorer ones. The term originally came from a study indicating that income equality was greater at middle levels of development than at low and high incomes. Kuznets curves have also been identified for some kinds of pollution, such as urban smog. The implication is that countries initially get dirtier as they grow but then start to clean up when the public demand for clean air and water exceeds the demand for more spendable income.

And indeed, a scatter plot relating the size-of-government component of the EFI to the SPI does show something very much like a Kuznets curve: 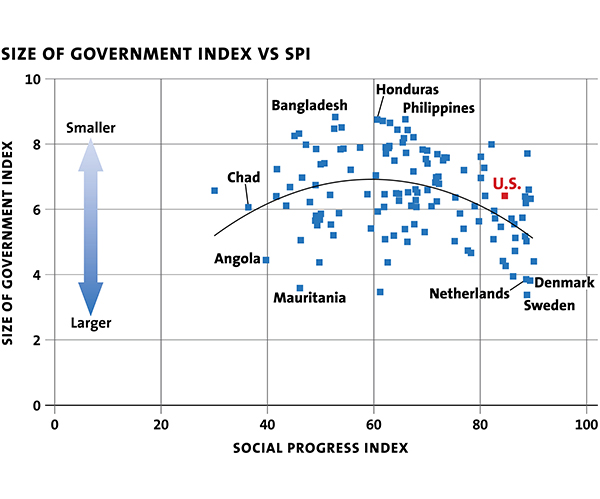 How can we explain this? Why is life in Sweden so much better than in Angola, despite the fact that both have big governments and high taxes? The answer jumps out when we look at another component of the EFI – the measure of the quality of the legal system and enforcement of property rights.

Sweden, the Netherlands and Denmark have scrupulously fair courts and strict enforcement of property rights. That makes them good places to do business, despite their high tax rates. As a result, they prosper, and thanks to large tax bases, their governments can afford to invest in good healthcare, education and environmental protection. Meanwhile, Angola, Chad, Mauritania and the like have miserable protection of property rights and legal rights. They are unattractive places to do business to begin with, and their excessive high taxes and red tape only make matters worse. What’s more, governments in those countries are more likely to appropriate state revenues for personal gain that could otherwise have improved social services.

In short, what matters for economic freedom and social progress is not so much the size of government as the quality of government. Rich, well-run countries can achieve freedom and prosperity whether their governments are as large as Sweden’s, as small as Chile’s – or in between, like that of the United States. Ideology, it seems, takes a back seat to common sense in predicting government intrusion on the quality of life.