JG, our loyal correspondent from Passadumkeag, Maine, asks whether it's true that the Review's new website (MilkenReview.org) contains clues to the location of the vast treasure mentioned in the Dead Sea Scrolls.

Not to my knowledge, JG – but you never know for sure. I still get my news from the mainstream media. But the website certainly does contain wealth more valuable than gold. Well … before the latest gold price escalation, anyway. You'll find all the content from the quarterly print magazine, plus a passel of articles and features posted in between. Meanwhile, have a look at the gems we've gathered for you in this earthbound edition.

Brad DeLong, an economist at the University of California (Berkeley) offers a spirited defense of helicopter money, the as-yet-unused macroeconomic tool that's widely viewed as too good to be true. Here, he explains "why it is so appealing to those of us who worry that stimulus will be insufficient to keep the economy chugging forward – and why proponents and critics seem inclined to talk past each other."

Jerry Taylor, the president of the Niskanen Center in Washington, explains why the time for a carbon tax to slow climate change has come – and why even Republicans enraptured by the siren song of the fossil fuel lobbies should rethink their position. "We know that hedging against very-high-damage scenarios is economically rational even if the probability of catastrophe is modest," he writes. "And we can be pretty sure that a carbon tax would deliver more abatement for the buck than the alternatives." 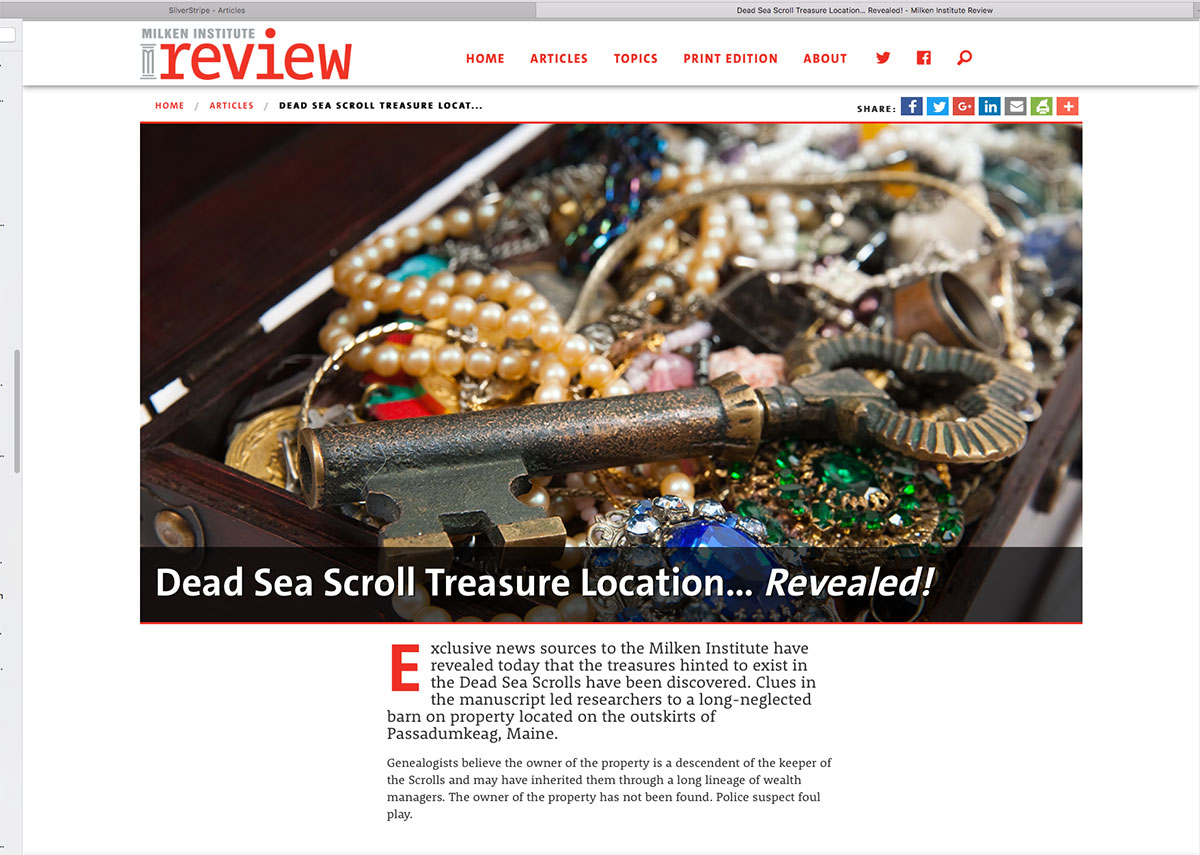 Eswar Prasad, an economist at Cornell and the Brookings Institution, offers a nuts-and-bolts primer on how China is using trade and investment to project power worldwide. "China is becoming a leader of the international community – not, as the West prefers, by being co-opted into existing institutions under the current rules of the game, but rather on its own terms," Prasad writes. "This goal subsumes another objective, which is to eventually alter the rules of global finance that China sees as conveying undue privilege to the existing reserve currencies."

Maureen Japha, director of regulatory policy at FasterCures, outlines ways to smooth the speed bumps as "venture philanthropies" make deals with medical research institutions unused to sharing control. "The new emphasis on sustainability, on both sides, is forcing all parties to reconsider how success will translate into income," she writes. "What's important to keep in mind, though, is that everyone involved agrees that the first priority is getting effective and efficient treatments to patients."

Eric Toder, co-director of the Urban-Brookings Tax Policy Center, leads readers down the tortuous path of business tax reform, made even more torturous by the rapid growth of enterprises that pass through their taxable income to individuals. "The U.S. system for taxing business income has entered a zone of baroque complexity that defies efforts to sync it with both the way businesses are organized in the United States and the growing integration of the global economy," he explains. "Something big has to give if we are to tap business income as an equitable and efficient source of taxes."

Andreas Bergh, an economist at Lund University in Sweden, cautions policy wonks eager to imitate Sweden's social and economic policies. "Surprising as it may seem to those who see Sweden as the triumph of the modern welfare state," he writes, "Sweden's success has largely been the result of trial and error, not to mention the beneficiary of the unintended consequences of public policy."

Tom Healey, the coordinator of New Jersey's bipartisan Pension and Health Benefit Study Commission, offers an insider's view of the battle to contain the ballooning employee benefits of states and localities. "Unfunded liabilities are a disaster in the making that lurk behind a gray wall of numbers, graphs and pie charts," he writes. "As Flint and Detroit found out, expecting the problem to recede with an uptick in the stock market or the wave of a consultant's wand is simply delusional."

Philip Martin, an economist at the University of California (Davis) explains how the scarcity of water and cheap labor are transforming California agriculture. "The state's giant farm sector offers a fascinating picture of markets and regulation at work," Martin writes. "What is emerging is a leaner, less tradition-bound industry. … And that is good news for the millions of rural residents desperate to avoid the sort of rapid dislocation that devastated Rust Belt manufacturing in the 1980s and 1990s."

And yes, there's even more! Check out the excerpt from Taxing the Rich, a new book by Kenneth Scheve (Stanford) and David Stasavage (NYU). And take a gander at Brookings demographer Bill Frey's latest charticle.

Previous: Not the Usual... Next: From the CEO