OK, so you’re in limbo between the fear you’ll lose your livelihood – or worse, your health – and the numbing ennui induced by watching too many Swedish detective noirs on Netflix. Don’t despair: take a break with some mind-focusing essays in this latest issue of the Review.

Mary Lovely, an economist at Syracuse University’s Maxwell School, assays the impact of the U.S.-China trade war – in particular, its longer-term implications for global economic integration and U.S. leadership. “Bringing manufacturing back from China is one of those ideas offering a little something to everyone: more jobs, more profits, less concern we are feeding the ambitions of an authoritarian juggernaut,” she writes. “Dig beneath the rhetoric, though, and what’s left is uncertainty. The global economy is a web that can’t be untangled easily or with any confidence that we’ll like the result.”

Barry Eichengreen, an economist at U.C. Berkeley, uses Alexander Hamilton’s ideas for binding together America’s post-colonial economy as a model for analyzing the potential impact of the European Union’s plan to share the costs of Covid-19. “Europe may just limp along, offsetting the ravages of the pandemic without creating a true Hamiltonian moment,” he writes. “But if the fiscal relief brought by the €750 billion goes smoothly, it may set in motion a virtuous cycle, bringing a greater sense of community and a greater willingness to yield sovereign prerogatives.”

Rachel Sachs, a law professor at Washington University (St. Louis), explains why intellectual property protection is critical to pharmaceutical innovation – but only some of the time. “Fundamental shifts in technology suggest there are alternative ways for ensuring that innovators can recoup their investments,” she writes. “And in light of the societal costs, it’s worth asking whether patents may sometimes do more harm than good.”

Larry Kotlikoff, an economist at Boston University, mourns – and justifiably rages at – our Rube Goldberg fiscal system, which creates enormous disincentives to work and demoralizes the poor. “There are, in theory, few ways out of this mess,” he writes. “Try, though, we must. Fiscal anarchy-as-usual pares growth, reduces social and geographic mobility – and, as we are learning the hard way, erodes our already fragile sense of America as one nation.”

Andrew Yarrow, an historian and author of Thrift: The History of an American Cultural Movement, reminds us that Americans have, from time to time, taken to heart the fable of the ant and the grasshopper. “The ideas of visionary proponents of the early 20th-century thrift movement do have some resonance in the 21st century,” he claims. “Stripped of its fuddy-duddy messaging, thrift fits with some new realities of modern life – in particular, more risk to incomes and health, more reason to believe that the environment will not sustain us and less reason to believe that government has got our backs.”

Larry Fisher, a former New York Times business reporter, celebrates the imminent arrival of dozens of gene therapies, even as he wonders how we will ever pay for them. “At $2.1 million for a single shot, Novartis’ Zolgensma for spinal muscular atrophy, is now the world’s most expensive drug,” he explains. “Figure $425,000 per eye for Spark Therapeutics’ drug Luxturna for an inherited form of blindness, while Vertex Pharmaceuticals’ Trifakta for cystic fibrosis costs $311,000 a year.”

Gary Hufbauer and Euijin Jung of the Peterson Institute for International Economics explain how a combination of a pandemic and toxic populist politics is taking a toll on the global supply chains that have smoothed the way to prosperity in much of the global economy. “Firms that prosper or wither on the impulse of protectionist-minded politicians will at least make a show of bringing the factories home,” they acknowledge. “But the business case for fragmenting production and sourcing components from low-cost, reliable locations is too powerful to ignore. Trump and even Covid-19 are no match for the great forces that drive specialization in the world economy.”

Bill Frey of the Brookings Institution offers one of his patented insights into demography as destiny. “The mostly white baby boomers who defined the culture of the last half of the 20th century are giving way to a multi-hued America,” he writes. “The demographic underpinnings for this reality have been set in place for a while. But the new data suggests that past projections have been too cautious.”

Since I couldn’t decide between excerpting two important new books, I chose both. Harvard prof Rebecca Henderson’s Reimagining Capitalism argues that much of the badly needed reforms can come from corporations themselves. Economist/journalist Marc Levinson’s Outside the Box explains what happens as the consequences of globalization far outstrip our capacity to channel it in benign directions. 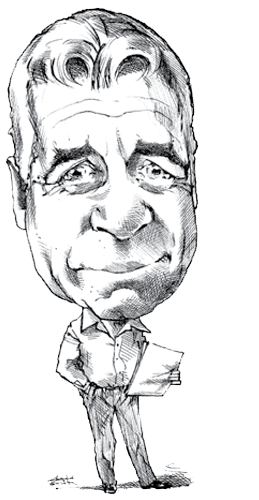 And the economist on the spine is ...

Martin Weitzman of Harvard, who sadly took his own life last year. Let me paraphrase the memorial I wrote for him. How should we remember Marty? As a skilled mathematician who translated insights from the hard sciences into accessible analyses of public policy? As a specialist on climate change who laid out the theory for marketbased responses to greenhouse gas emissions – and how to manage the threat of catastrophic climate events? As a restless genius whose dabbling in labor economics led The New York Times to label his insight into the containment of inflation as “the best idea since Keynes”? As the most admired modern economist who never won a Nobel Prize? As an unpretentious teacher who never bothered to unlearn his workingclass New York accent? Yes, yes, yes, yes and yes.       – Peter Passell