The use of high-risk pools — the idea of separating the most costly candidates for insurance from the regular pool – has occupied a prominent place in the debate among conservatives over how best to replace the Affordable Care Act (a.k.a. Obamacare). Both HHS Secretary Tom Price and House Speaker Paul Ryan have repeatedly endorsed the idea. Yet, in the GOP draft of the repeal-and-replace bill unveiled in early March, high-risk pools were relegated to a minor role. What happened? Should we weep or rejoice that this idea seems to have lost favor? Do high-risk pools have a future in a reformed healthcare system?

To answer these questions, we need to look both at the theory of high-risk pools and their actual operation prior to passage of the ACA. Spoiler alert: they do have a certain logic on their side, but it has been hard to make them work well in practice.

Private companies can only profitably offer insurance at affordable premiums if their pool of customers contains enough healthy individuals to keep the average cost of claims manageably low. If too many sick people join the pool, claims – and thus premiums – inevitably begin to rise. Rising premiums lead healthy members of the pool to drop out and take their chances on muddling through without coverage. The loss of these healthy (low-cost) customers pushes premiums higher still for those who remain in the pool, and eventually no one can afford coverage. Economists call this the problem of “adverse selection,” a term applicable to many sorts of insurance. Washington and the media have adopted a flashier term: the death spiral.

High-risk pools address the problem of adverse selection by dividing the market into separate pools, a practice (when it was legal) called medical underwriting. That is, insurers limit coverage to relatively healthy people. They refuse to cover people with preexisting conditions, or cover them only at very high rates, or place caps on annual or lifetime benefits. If medical underwriting serves any social purpose, it is that of allowing insurers to keep premiums affordable for their healthiest customers.

People who are not able to obtain coverage in the private market, or who have reached their spending caps, are relegated to a separate high-risk pool – if one exists. Such pools can’t possibly charge enough to cover predicted costs and must therefore be supported by government subsidies. In theory, dividing the market in this way makes unsubsidized private insurance affordable for the majority while limiting subsidies to the few whose medical needs are greatest.

Described in this way, high-risk pools sound like a good compromise between the universal single-payer systems that the rest of the developed world uses, but that many Americans find ideologically distasteful, and a purely commercial system that would make coverage unaffordable for all but the healthy and the wealthy. What could go wrong?

The first problem stems from a nasty reality that proponents of high-risk pools often gloss over. Although such pools would need to cover only a minority of individuals, that small group accounts for a startling portion of healthcare spending. Consider the chart, based on data from the Kaiser Family Foundation. 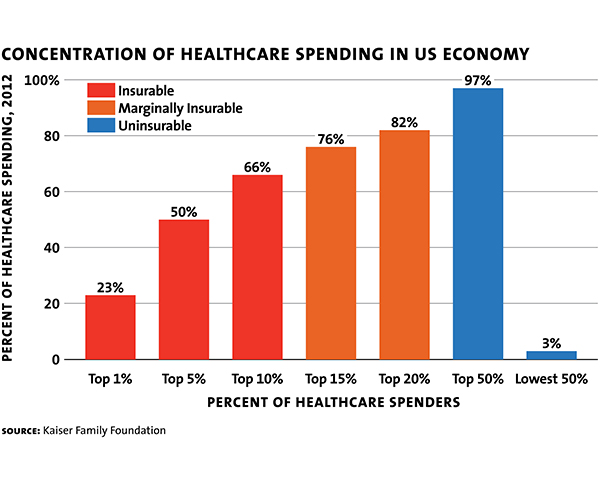 The top one percent of healthcare spenders account for almost a quarter of total outlays, while the top 5 percent account for half, and the top 10 percent consume two-thirds of the total. Data from the National Institute of Health Care Management show a majority of people in the top spending groups suffer from chronic conditions or functional limitations that put them in the high-spending category year after year.

People in the top spending groups are uninsurable by the standards of conventional medical underwriting. About 40 percent of people in the high-spending categories are eligible for Medicare, which, in its own way, can be viewed as a high-risk pool for seniors. If private insurers were allowed to turn away people with preexisting conditions, high-risk individuals below Medicare age would be candidates for a high-risk pool of their own.

People who fall into the chart’s middle category — between the eightieth and ninetieth percentiles of spending units — account for about 16 percent of total healthcare spending. Without the ACA, people in this group would be marginally insurable. Some could obtain insurance through an employer. If they were self-employed and wealthy, they might well be able to purchase individual insurance with high deductibles at premiums above the levels the majority of Americans could pay. Others would either be unable to afford high premiums quoted by private insurers or would be rejected outright because of preexisting conditions.

People in lowest two-thirds of spenders account for less than 10 percent of total spending and those in the lowest half for just three percent of spending. If the highest risk individuals were removed from the private insurance pool, it is likely that most of these people, except perhaps for the very poor, would be able to buy private individual insurance at affordable premiums.

Some conservatives speak as if it would be easy to offer subsidized high-risk pools to a small sliver of the population — just 5 or 10 percent — and let everyone else pay their own way. Unfortunately, given the distribution of spending, it would not be easy at all. In a study for the Commonwealth Foundation,  Jean P. Hall of the University of Kansas calculates that the net cost to the federal budget of a national high-risk pool would be $178 billion per year. That assumes the pools would cover 13.7 million people with chronic conditions, less than 5 percent of the population. Each of them would pay a premium of $7,000 per year and have average medical costs of $20,000 per year, requiring a subsidy of $13,000.

Republican proposals do not come close to providing that kind of money. While still a Congressman, Secretary Tom Price suggested a budget of $1 billion per year for subsidies to state high-risk pools. A preliminary proposal endorsed by Rep. Paul Ryan was a little more generous, at $2.5 billion per year. The March repeal-and-replace draft raises the amount potentially available for high-risk pools to $10 billion per year. But even that would come to just $728 each for 13.7 billion medically eligible individuals. To express it another way, $10 billion would cover Hall’s estimated $13,000 per year needed subsidy for fewer than 750,000 out of 13.7 million medically eligible candidates — less than 6 percent of the total.

The clash between the real-world expenses of high-risk pools and the amount Republicans seem willing to budget sets up a tension between affordability and accessibility. GOP reformers promise both — “a step-by-step approach to give every American access to quality, affordable health care,” in the words of a policy brief released earlier this year by House Republicans. As the numbers demonstrate, fulfilling such a promise would have annual costs of far, far more than $10 billion.

The experience of high-risk pools that existed before the ACA gives an idea of what happens when the goal of affordable, accessible coverage meets budget realities. In an issue brief for the Kaiser Family Foundation, Karen Politz reports that at their peak in 2011, 35 states had some kind of high-risk pool. Total enrollment in the pools, however, was just 223,000 people — fewer than 2 percent of the number estimated to be otherwise uninsurable today. States discouraged participation in a number of ways:

Most charged premiums well above private insurance rates, typically 150 to 200 percent of the prevailing average. According to a Kaiser Family Foundation calculator, the average “silver” plan premium for a family of four on the ACA exchanges is $923 per month. Applying the 2011 high-risk markups to that amount would give a range of $16,614 to $22,152 — approximately 30 to 40 percent of median household income.

Some states closed enrollment altogether when funds ran out. Others had waiting periods or excluded treatment of preexisting conditions for a period after initial enrollment in the pool.

On balance, then, the high-risk pools of the past fell far short of universal accessibility and affordability. Pools that covered the full needs of all medically eligible individuals at an affordable cost would require much larger budget allocations than either the federal government or most states seem willing to appropriate.

As reality hits, the curtain falls on high-risk pools

My guess is that somewhere along the line, hard-working staffers for Price and Ryan sat down with their principals and explained the math. The conversation would have gone like this:

Staffer: If you want to get serious about high-risk pools, it will cost not ten billion dollars a year, but rather hundreds of billions.

Price and Ryan: No, thanks.

However, given the rhetorical capital invested in high-risk pools, some face-saving gesture was needed. Section 132 of the draft legislation from the House Energy and Commerce Committee (call it Ryancare, if you like) provides the needed cover in the form of a proposed Patient and State Stability Fund, which, as mentioned above, gets an allocation of $10 billion, plus an extra $5 billion for startup costs for the first two years.

Note, however, that high-risk pools are just one of several things on which states can spend their share of the (woefully inadequate) Section 132 money. They are free to use it for other purposes that they think will stabilize premiums in the individual or small group market, or even to subsidize dental and vision care. Then, too, they can turn the money down altogether, in which case the Centers for Medicare and Medicaid Services will spend it for them in other ways to help stabilize premiums in the declining state.

If sick people go into the pool with the healthy, premiums go up. If healthy people leave, they go up even more, and the whole program collapses.

Instead of fully funding high-risk pools, the Ryancare draft retains the provisions of the current law that bar insurance companies from turning away people with preexisting conditions or charging them higher premiums. Unfortunately, that puts the GOP-style private market at risk of the same kind of death spiral shadowing Obamacare. If sick people go into the pool with the healthy, premiums go up. If healthy people leave, they go up even more, and the whole program collapses.

In fact, the risk of a death spiral is likely to be even greater under Ryancare than it was under the ACA. For one thing, it scraps the individual mandate, so healthy people no longer have to pay a penalty if they don’t buy insurance. In the draft, the individual mandate is replaced by a provision that allows insurance companies to add a 30 percent surcharge to the premiums of new customers who were previously uninsured. But that amounts to a tap on the wrist since the penalty applies only to the first year of coverage.

Further eroding the potential for using healthy people to subsidize coverage for the less healthy, the GOP plan would ease restrictions on minimum coverage in insurance. That would allow healthy people to buy bare-bones catastrophic-only insurance and then switch without penalty to deeper coverage when they get sick. Finally, since subsidies under the Republican plan are set at a fixed amount rather than as a percent of premiums, individuals will bear the full weight of premium increases, inducing even more healthy people to drop coverage.

Conservatives may yet regret giving up on the idea of properly funding high-risk pools. If enacting the March draft into law leads to a collapse of the individual insurance market, what will come next? Does anyone think that Republicans can win the next election on a promise to repeal and replace their own failed replacement?

The next time Democrats get a majority in Washington, they are unlikely to simply resurrect the interest-group-balancing house of cards that Obamacare has turned out to be. Instead, they will go straight for Medicare-for-all, or some other version of single-payer healthcare. And once the United States joins the rest of the civilized world, there will be no turning back. For better or worse, the Republican vision of fully affordable and accessible healthcare for all, delivered without government mandate, will be dead.