How Austrian Economists Fought the War of Ideas

A review of Marginal Revolutionaries 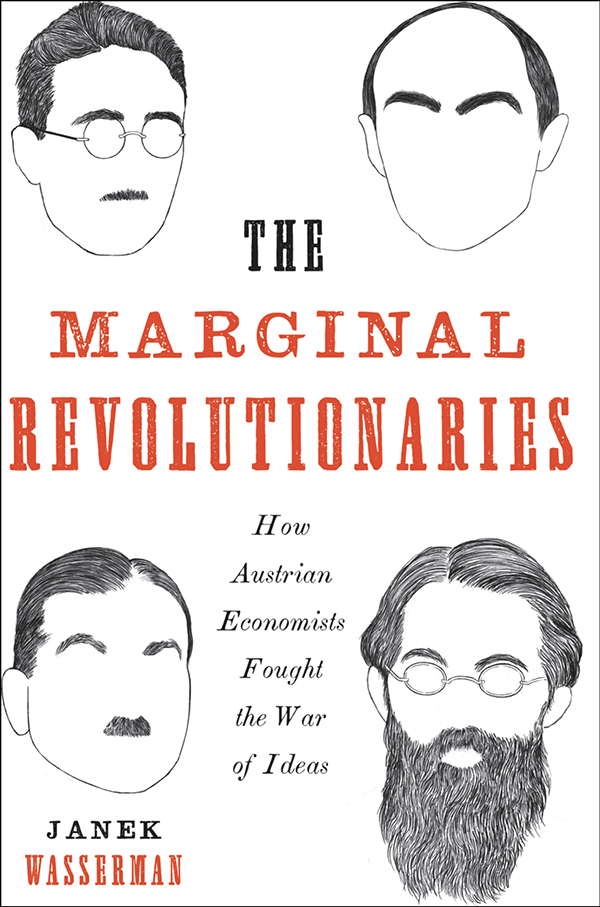 The Marginal Revolutionaries: How Austrian Economists Fought the War of Ideas

edward tenner is visiting scholar in the Rutgers Department of History and a distinguished scholar in the Smithsonian Institution’s Lemelson Center for the Study of Invention and Innovation.

Most intellectual histories begin with a foundational work (or works), like The Origin of Species or Capital, and trace their subsequent influence. Janek Wasserman’s The Marginal Revolutionaries departs from this formula by acknowledging that the Principles of Economics, by Carl Menger, was a near failure when published in 1871. Though admired for originality, Menger’s tome was widely dismissed as too disjointed to be effective as either a textbook or a treatise.

It sold poorly and the author never got around to revising it. Yet paradoxically, Menger came to be revered as the founder of the “Austrian School” of economics, with acolytes like Alan Greenspan and the Koch brothers dotting the commanding heights of government and the economy 15 decades after its publication in 1871.

The essence of Menger’s contribution, as explained by Wasserman, a historian specializing in modern Europe at the University of Alabama, is an economic theory of value that relies on the subjective value of the last unit consumed — a theory of “marginal utility” developed from the ideas of the 19th-century English economist Stanley Jevons and his French counterpart Léon Walras. But with a twist: as Wasserman explains it, Menger’s was also a theory of human progress, positing that the interaction of the subjective sense of value (or utility) of many producers and consumers was the best way to resolve the chronic uncertainty of economic life. In his reckoning, the entrepreneur becomes a kind of magician whose actions multiply the welfare of society.

If summaries like this bewilder many readers, the problem may go back to the movement’s origins. Wasserman dwells on the difficulty of Menger’s prose, even for his German-speaking contemporaries. The result is that anyone seeking an explanation of What Menger Really Meant (to paraphrase the title of a famous book by the historian G.D.H. Cole on Karl Marx) must look elsewhere. Even Menger’s later followers never produced a master text like their archfoe Karl Marx’s Capital (1867) or 21st-century classics like John Maynard Keynes’s General Theory of Employment, Interest and Money (1936) or Paul Samuelson’s Foundations of Economic Analysis (1947) — or, for that matter, Samuelson’s introductory textbook that explained contemporary economics to a generation.

Before World War I convulsed Viennese society, the Austrian School achieved international recognition for studies challenging the dominant historical and institutional approach (now mostly forgotten) of the leading German economists of the day. The Austrian School economists had been brought up in a comfortable upper-middle-class milieu of industrialists, academics and higher civil servants, and were at home as bureaucrats and advisors to the influential. Indeed, for two years, Menger himself had been a tutor to the heir to the Austrian throne. Austrian economists were internationally renowned as problem-solving theorists.

The Austrians saw themselves as the most consequential critics of Marxism, which had broken through the smugness of European intellectuals with a vengeance in the late 19th century — and leading communists seemed to agree. The escaped Bolshevik political prisoner Nikolai Bukharin found temporary refuge in Vienna from 1911 until his expulsion as an enemy alien at the outbreak of the Great War in 1914. There, Bukharin participated in an experiment that may be unique in academic history: a private seminar organized by the Menger disciple Eugen von Böhm-Bawerk, an economist of world rank who encouraged critical discussion not only among Menger’s and Böhm’s followers but also among Marxists like Bukharin and the astonishing polymath Otto Neurath, now best known as a founder of modern information graphics. Bukharin immersed himself in Austrian market liberalism in order to attack marginal utility and defend Marx’s competing “labor theory of value.”

The Austro-Hungarian empire’s defeat and dismemberment after 1918 marked the beginning of a second stage of the Austrian School. A new generation of stars appeared, including some more familiar names — Friedrich von Hayek, Fritz Machlup, Oskar Morgenstern (collaborator with John von Neumann in the origins of game theory), Joseph Schumpeter and Ludwig von Mises. But their immediate prospects were poor. Only three of the seven Austrian universities remained in the new rump state of Austria, and these faced impoverished budgets and discouraging outlooks for non-tenured faculty members. Austrian politics were also transformed by the war, polarized between clerical conservatives and German nationalists on one side and social democrats on the other (a k a, Black Vienna and Red Vienna).

Vienna became a laboratory for the 20th-century welfare state, with magnificent public housing projects and ambitious children’s programs. Classical free market liberalism, with its affirmation of the entrepreneurial bourgeois, was squeezed from both right and left.

Wasserman, a specialist in interwar Vienna, shows how hard times prompted creative responses by the new generation of Austrian School economists, who became public intellectuals and formed networks to take the place of academic institutions. (Joseph Schumpeter, the only one who achieved ministerial rank in the national government, resigned after only seven months as finance minister and became head of a bank that failed in 1925.) Vigorous opposition sharpened their argumentative skills. But after the victory of Austrian fascists and an attempted Nazi coup in 1934 (followed by Hitler’s annexation of Austria four years later) the Austrian economists were forced to disperse.

It is in the transition of the Austrians to the United States — and to a lesser degree England — that The Marginal Revolutionaries becomes truly engrossing. An unintended consequence of the marginalization of the neo-liberal (yes, the phrase was once used positively) economists was their emergence as versatile public intellectuals who drew the attention of reform-minded American philanthropies like the Rockefeller Foundation. The Great Depression brought business cycles to the center of economic thinking, and the foundation generously sponsored Friedrich Hayek.

The last chapters of the book deal with the Austrians in the United States, where they turned from technical economics to broader questions of political economy, writing bestsellers like Schumpeter’s Capitalism, Socialism and Democracy (1942) and Hayek’s Road to Serfdom (1944). What is most striking about the Austrians in exile is their pride. Hayek and Mises each initially rejected what they considered inadequately salaried academic job offers, and the aristocratic Mises lived on stipends from wealthy private benefactors and the foundations they supported. Hayek’s chair at the University of Chicago was also donor-supported.

There is a striking contrast between the opening chapters of the book and the social cohesion of Menger’s followers, their seminars and their integration into state policymaking on one side and the fractured world of personal friendships, political alliances and new American disciples (including memorable individualists like Murray Rothbard in the later 20th century) on the other. Not to mention the complex relationship with the libertarianism of the Chicago School. Today, according to Wasserman, there are two rival Austrian movements centered on the Mercatus Center at George Mason University in Virginia and the Ludwig von Mises Institute in Alabama, respectively.

With an all-star cast of great and near great thinkers — Schumpeter, Hayek and Mises are still among the most frequently cited economists, though well behind their nemesis Keynes — The Marginal Revolutionaries does not have space to go into depth about the ideas of any one of them or to contrast their models with those of mainstream academics. Wasserman clearly disapproves of libertarian politics, noting Mises’ skepticism about democracy and deploying the epithet Kochtopus for the Koch Brothers network. But he also acknowledges the brilliance and subtlety of Schumpeter’s defense of capitalism, sometimes misinterpreted as pessimism. And he displays such a range of views that we wonder whether there really was a shared core to Austrian economics.

In the 1890s Menger was a staunch defender of the gold standard, but it was his former students who drafted and defended Austria’s first progressive income tax, enacted in 1896. In his preamble, Böhm argued from marginal utility theory that the rich received disproportionately more services than the poor from the state. Hayek originally rejected central planning but not necessarily state regulation and social welfare programs, dedicating The Road to Serfdom to “socialists of all parties.” Yet, as a professor at the University of Chicago, Hayek turned toward Mises’ skepticism about popular sovereignty’s compatibility with economic freedom.

The Marginal Revolutionaries might have been a different kind of book, an intellectual history of the idea of marginal utility, its defenders and critics. But it succeeds brilliantly in its aim, exploring the interaction of ideas, personalities and historical circumstances that created and splintered a movement. Using impressive archival resources, Wasserman brings to life the people behind the movement, their remarkable resilience and their gift for adapting to new cultures, audiences and supporters, and building institutions to carry on the movement. In exile from the ruins of a dynasty and the legacy of Red and Black Vienna, they created a new empire of ideas that for better and worse has not lost its power.