How to Leave the Euro

ed dolan, creator of Ed Dolan’s Econ Blog, is the author of Introduction to Economics.

The leaders of Italy’s new populist government say they do not want to leave the euro, though no one believes them. After all, they campaigned on the issue. And, until they were stopped by the president of the Italian Republic, they tried to appoint Paolo Savona, a well-known euroskeptic, as finance minister. Instead, they appointed him European Affairs Minister.

In a recent book, Savona called the euro a “German cage” and wrote that “we need to prepare a plan B to get out of the euro if necessary ... the other alternative is to end up like Greece.” In short, it is not surprising that the new government’s commitment to the euro is in doubt.

Whenever the possibility that some country might ditch the euro arises, voices of the establishment are quick to offer a reality check. Abandoning one currency and introducing a new one is just too difficult, they say. They point to the years of planning that went into launching the euro in the first place. And they warn that escaping from its embrace would generate problems ranging from the serious (bank runs) to the mundane (retrofitting vending machines).

Ultimately, though, purely technical difficulties are surmountable. If Italy does decide to leave, the key to success will be to learn from the experience of the many countries that have changed currencies in the past. Here is a practical roadmap, drawing on the imaginative and pragmatic devices that others have used to ease the introduction of a new currency.

Lesson 1: Use a Temporary Currency

Those who worry about technical barriers to changing currencies often point to the time it would take to print notes, mint coins and put them into circulation. That time could be greatly shortened by using a temporary currency during a transition.

Latvia’s exit from the ruble area in the early 1990s is a case in point. First, in May 1992, authorities introduced a Latvian ruble as a temporary replacement for the old Soviet ruble. Only months later, after due preparation, did they put the new permanent currency, the lats, into circulation. Distinguished by some of the most handsome coins in Europe, the lats served for 22 years until Latvia switched again, joining the euro.

A temporary currency solves several problems. For one thing, it can be run off quickly and cheaply without all the elaborate counterfeiting safeguards of a modern currency – it won’t be around long enough to be worth counterfeiting.

The speed record for introducing a temporary currency seems to have been set by the Soviet occupiers of eastern Germany after World War II. When the Americans, British and French replaced the old reichsmark with the deutschmark in 1948, the Soviets were caught flat-footed. As Nazi-era currency that was now worthless in western Germany flooded into the Soviet zone, occupation authorities hastily printed paper stickers, which they stuck on a limited number of reichsmark notes to serve as a temporary currency. Those were then replaced with a permanent currency, which became known as the ostmark and lasted until reunification.

To make things easier, there is no real need to issue coins in the temporary currency. For example, when Kazakhstan switched from the ruble to the tenge in the early 1990s, there was a period in which there were no coins in circulation. Their place was taken by grimy little fractional banknotes, which were a nuisance, but got the job done. Nicely minted tenge coins came later.

A temporary currency can also serve the useful purpose of deflecting public disrespect. If the new currency is expected to depreciate (which seems a no-brainer if Italy exits the euro) people are bound to think up some derisive name for it and treat it with contempt. For example, a temporary Belarus ruble issued in 1992 was popularly called the zaichik, or “bunny,” after a whimsical picture on the one-ruble note. Later, after a degree of stability was restored, a somewhat more respectable Belarus currency (absent bunny) was issued. 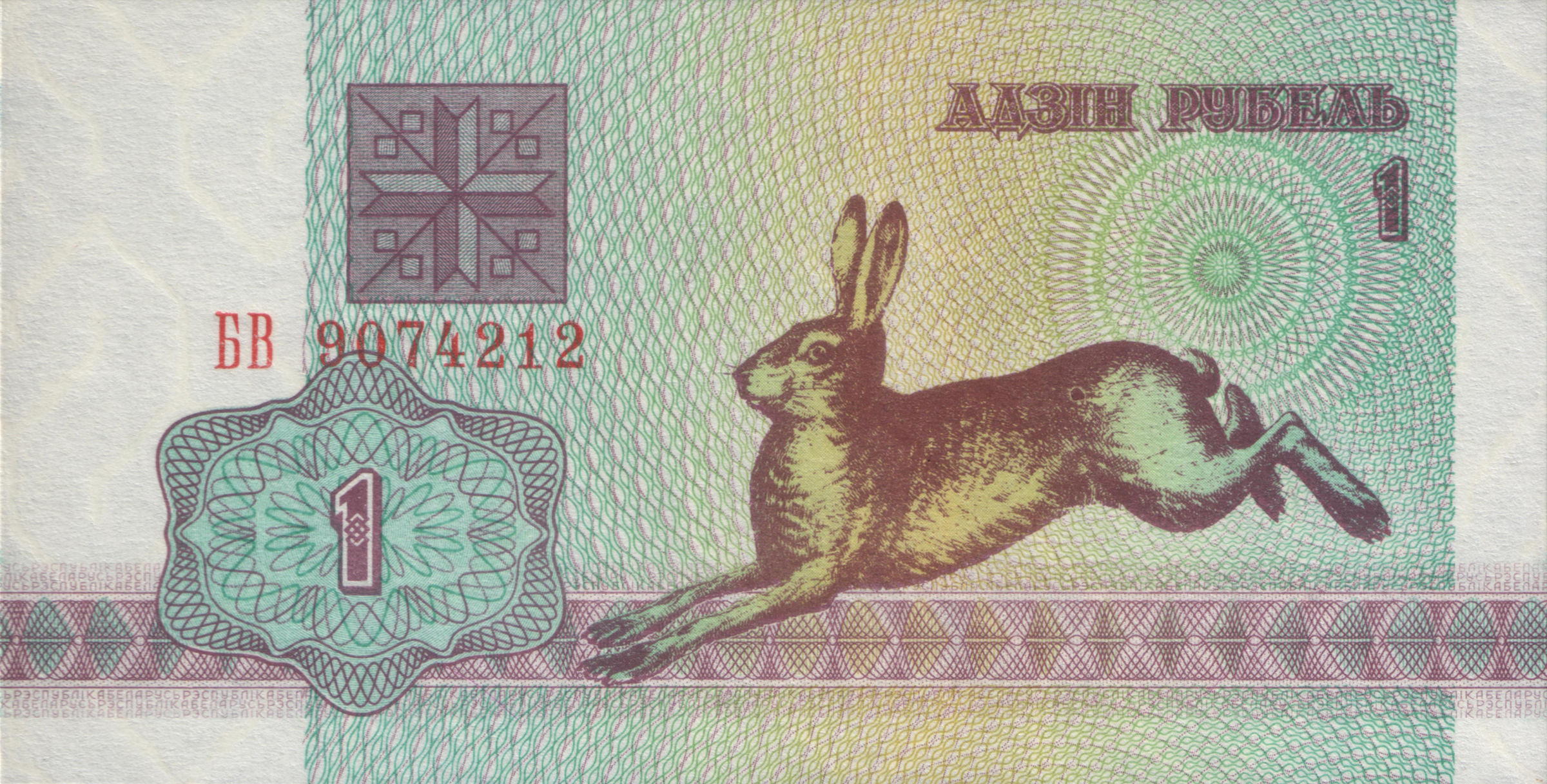 Giving the temporary currency the same name and denomination as the old one, as was done in Latvia and Belarus, simplifies accounting, signage and other technical matters. Following that example, Italy might begin with a temporary Italian euro. A permanent new lira could come later, after the government established credible monetary management.

Lesson 2: Do Not Fear Parallel Currencies

Introducing a new currency would be harder if it had to replace the old one all at once, but there is no reason it would have to do so. Many countries have eased the transition from one currency to another by sanctioning parallel circulation during a transition period.

Sometimes the old currency can be left in circulation for a while at a fixed exchange rate with the new one. That is how the euro was first introduced, and the same practice has been followed by the countries that joined the Eurozone later on. Temporary parallel circulation makes sure that everyone doesn’t have to spend January 1 standing in line at their bank, and it gives technicians time to update automated parking lot gates so that no one is trapped in a garage by the wrong coins.

Parallel currencies with a floating exchange rate are also possible. These currencies often develop spontaneously in countries experiencing hyperinflation. While the ruble or peso or whatever remains the official legal tender, people use a hard currency such as the dollar or euro alongside it. Typically, the rapidly depreciating local currency continues to be used as a means of exchange for small transactions while the more stable foreign currency serves as a means of account and a store of value.

In the hyperinflation case, parallel circulation often ends with the introduction of a new national currency that’s fixed in value relative to the unofficial parallel currency. For example, in the early 1980s the value of Argentina’s peso was wrecked by hyperinflation. As the peso became ever less dependable, people began to use U.S. dollars as a unit of account and store of value. In 1985, the Argentine government temporarily stopped hyperinflation by replacing the peso with a new currency, the austral, which it declared to have a fixed value of one dollar.

Then, when the austral began to circle the drain in response to accelerating inflation in the early 1990s, it was ditched in favor of a new peso – again declared to be worth one dollar. Estonia in 1992 and Bulgaria in 1997 are other examples in which parallel currency circulation preceded the introduction of a new, hopefully stable national currency.

If Italy decided to exit the euro now, the situation would be very different. Instead of moving from a less to a more stable currency, it would, in effect, be abandoning the euro in order to achieve the currency depreciation needed to make its exports more competitive without going through German-compelled fiscal austerity. That would make it a little like running the Argentine movie in reverse. Instead of the euro gradually coming into broader circulation as the national currency became less stable, a temporary floating currency could be introduced gradually alongside the euro, to be replaced only when the economy began to stabilize.

What would motivate people to use the new currency? One way to bring it into circulation would be to introduce it first where people had no choice. For example, Italy could begin by printing a temporary Italian euro, which at first would be used only to pay government salaries, pensions and interest on the national debt, and also be accepted for payment of taxes. Gradually, its use could be extended as expectations of its exchange rate with the real euro stabilized, pushed along by administrative means as needed.

Lesson 3: Default Early, But Not Often

Those pressing Italy to stay within the Eurozone point out that devaluation would very likely force default on any obligations (like euro-denominated government bonds) that could not be redenominated to the new currency. True enough. But then, if a country could service its obligations without sacrificing something important (like employment or social services), it wouldn’t be thinking about exit and devaluation in the first place, would it? The fact is, if a government is insolvent and no one is willing to lend it hard currency, it is going to have to default in one way or another. The only question is whether default with a change in currency is preferable to default within the old currency.

In general, the best strategy for governments (or, for that matter, people) that can’t meet financial obligations is to default early, but not often. That means stopping payments on obligations as soon as it is clear that they cannot be met in full. The time to sort out any partial payments is after default, not before. A prolonged period in which default appears increasingly likely but has not yet occurred only encourages bank runs and capital flight.

One form of “defaulting often” is to accept “evergreening.” Evergreening occurs when creditors make additional loans to debtors they know to be insolvent, with the intent of forcing the debtor to use the new funds to keep payments on the debt current and thereby delay the day of reckoning. Trouble is, the problem gets bigger the longer default is postponed.

Another mistake is to try to negotiate terms of default in advance. Negotiating a new “haircut” with your lenders every few months, as Greece did in the aftermath of the global financial crisis, is another form of defaulting often. The strategy creates three problems. First, the debtor’s bargaining power is likely to be weak as long as non-payment is a threat, not a fact. Second, the debtor is subject to pressure to accept terms, like mandatory austerity measures, that reduce its actual ability to repay. Third, there may simply be no way to know what kinds of partial payment terms are realistic until some time has passed and the dust has settled.

Not all barriers to switching currencies are mere technicalities. The combination of default and devaluation will cause real pain to foreign creditors, and the defaulting country is likely to suffer the blowback. In today’s world, creditors are unlikely to use force, as France and Belgium did when they occupied the Ruhr in 1923 in an attempt to collect reparation payments from the democratic German government. The invasion helped set the stage for Hitler and World War II, and no one has tried the tactic since. Still, that does not mean defaulters can expect to get off unscathed.

For one thing, defaulters may end up with limited access to international credit markets, as Argentina found following its 2001 default. Default by a member of the euro area, followed by an attempt to redenominate debts into a devalued currency, would create thorny legal problems. National courts of creditor countries might attach the extra-territorial assets of the defaulting government (or of its citizens). They might even make it hard for government officials or private citizens to travel abroad. No one really knows.

Furthermore, devaluation and exit from the euro would not solve all the debtor’s macroeconomic problems, or perhaps we should say, it would solve one set of problems but create others. If the operation were carried out by a new populist government that abandoned structural reforms and budget discipline — a real concern in Italy — it would be hard to achieve lasting stability. Again, Argentina is a cautionary tale. Despite a quick return of economic growth following its default, the government found it hard to control inflation (or corruption) and was eventually voted out of office.

In short, there are many reasons why no member has ever left the Eurozone. The pros and cons of doing so remain open to debate. However, as the debate drags on, it’s important to separate the purely technical issues, like reprogramming vending machines, from the truly troubling issues like the risks of inflation and capital flight.