philip g. hoxie, is a research associate at the American Enterprise Institute. stephanie mercier, is an independent agricultural policy consultant in Washington and former Chief Economist of the Senate Agriculture Committee. vincent smith is a professor of economics at Montana State University and director of agricultural studies at the American Enterprise Institute. This article is adapted from their AEI Working Paper.

Rent-seeking is an ancient and well-polished political art, practiced today by expert lobbyists who capture surpluses for their clients, often at the expense of the weakest and poorest members of society. Few incidences of successful rent-seeking do as much harm while delivering such modest benefits to the practitioners than the groups taking advantage of the strings attached by Congress to the emergency international food-aid program, now called the Food for Peace initiative, managed by the U.S. Agency for International Development. Farm interest groups, shipping companies and seamen’s unions long ago persuaded legislators to impose two costly constraints on the program requiring almost all food for overseas aid be sourced in the United States and that most of it be transported on American- flagged vessels with American crews. The consequence: shipments are delayed by as much as 4 months because of these constraints, and every year as many as 8 million of the most desperately poor people in the world lose access to some aid because the FFP budget is eaten up by shipping costs.

Good Intentions With a Price Tag

The FFP program was formally established by Congress in 1954. Initially, the program was designed as a win-win, structured to benefit U.S. farmers along with starving millions abroad. Within two months of signing the legislation, however, transoceanic shipping companies increasingly unable to compete in global markets managed to cut themselves into the deal.

Benefits accruing to the farm sector have substantially diminished over the past halfcentury as the share of U.S. agricultural exports accounted for by food aid has shrunk from about 30 percent in 1957 to negligible proportions (less than 2 percent) today. As a result, the shipping tail is now wagging the food-aid dog: U.S. shipping companies and related mariners’ unions are effectively the sole remaining advocates for the cargo-preference mandates that benefit their members at the expense of international relief efforts.

After President Eisenhower signed the food-aid law, Congress amended the existing protectionist Merchant Marine Act to extend “cargo-preference” requirements for defense and other government-purchased commodities to include international food-aid shipments. The minimum percentage of the total tons of food aid to be carried under cargopreference rules has varied over the decades. But even in its more liberal phases, the ties still bind: in 1954, the share was 50 percent, then increased to 75 percent in the mid-1980s, and subsequently returned to 50 percent in 2012.

Since 2012, U.S. maritime companies and maritime unions have steadily lobbied Congress to raise the cargo-preference requirement, initially back to 75 percent. Indeed, those lobbies came close in 2017 to convincing the Trump administration, which took its own “America First” slogan seriously, to increase the requirement to 100 percent. The U.S. shipping companies lost the battle, but maybe not the war: President Biden is not entirely unsympathetic to the parochial interests of unions and concerns about the impacts of foreign competition on U.S. jobs.

Who Gets What How

The emergency food-aid program annually delivers around 1.4 million metric tons (3.1 billion pounds) of food aid to tens of millions of ill-nourished people in poor and war-torn countries. USAID and the U.S. Department of Agriculture manage the purchase of food on the open market and oversee its transportation to where the aid is needed abroad. USAID determines which shipments will be carried under cargo preference by qualified U.S. vessels, while all other shipments can be carried on any vessel, regardless of flag. Most shipments are managed by the World Food Programme or other U.S.-based nongovernmental organizations such as Catholic Relief Services.

Food aid consists of packaged goods that typically are transported on container ships, as well as grain and oilseeds carried by bulk carriers in cargo holds. Routes for bulk shipments tend be longer, and shipment sizes are generally larger. Packaged goods include relatively high-value products such as processed vegetable oil, which can easily be shipped on the same vessel with commercial cargo. USAID is responsible for ensuring that, by the end of each fiscal year, at least half of all packaged goods and half of all bulk goods by tonnage are transported on U.S.-flagged vessels.

Food-aid cargo preference creates protected markets for U.S. carriers in which competition is substantially reduced. For example, between 2013 and 2018, only 15 ships carried cargo-preference bulk shipments, with as few as four actually carrying bulk cargo in any given year. A larger number of vessels are approved for cargo-preference shipments of packaged goods, but the companies that operate those ships also enjoy a protected market. In 2011, the U.S. Maritime Administration (MARAD) determined that U.S.-flagged ships are required by various regulations to pay higher wages and use larger crews than their competitors, so operating costs for U.S.- flagged vessels could be up to 170 percent higher than those of foreign-flagged vessels. It is therefore almost inevitable that cargo-preference shipments are likely to be much more expensive than shipments open to competitive bids from non-U.S. carriers. 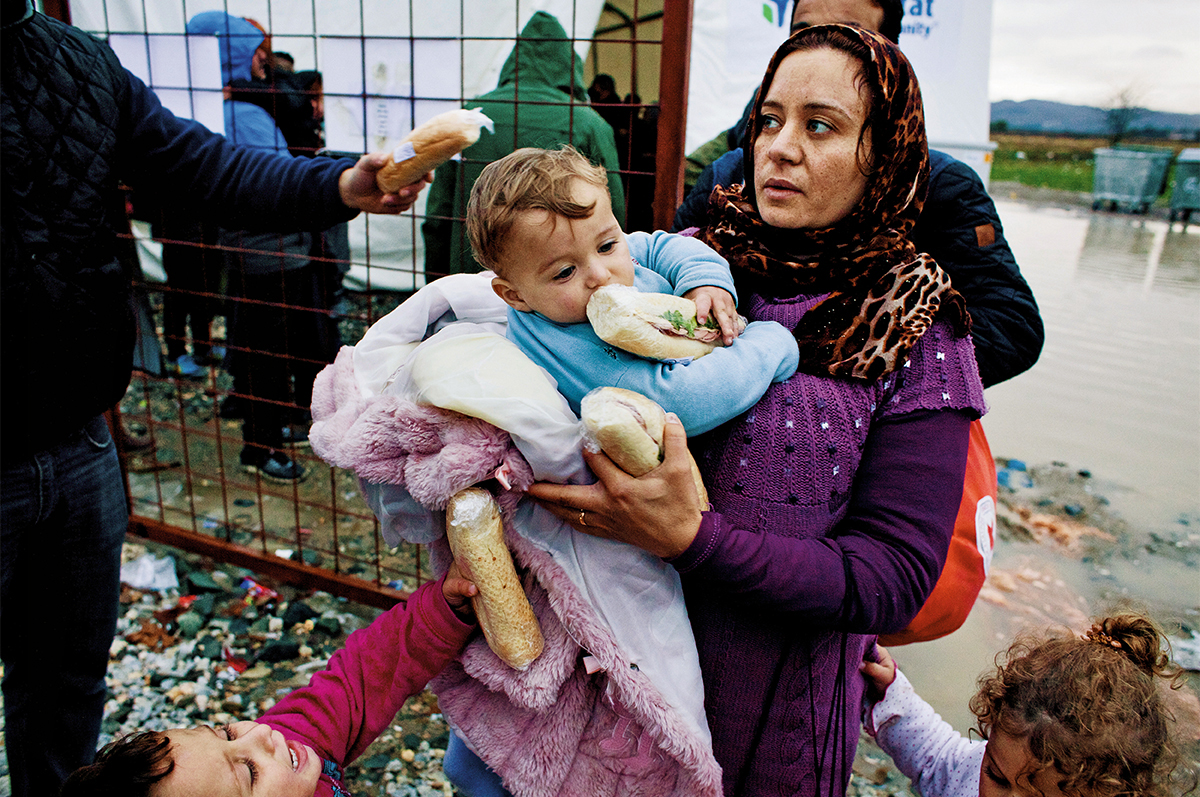 To determine how, under the cargo-preference mandate, the combination of reduced competition and higher operating costs translated into higher FFP program costs, we obtained detailed data from USAID and USDA on all 4,815 individual food-aid shipments distributed between FY2013 and FY2018. We estimated the impacts on shipping costs of cargo-preference status and other potential explanatory variables (shipment size, route distance, vessel type and route) separately for individual packaged and bulk goods shipments. Then we used these estimates to calculate the total increase in transoceanic shipping costs resulting from the cargo-preference mandate for each of the seven fiscal years. Results for packaged and bulk goods shipments are shown in the figure below. 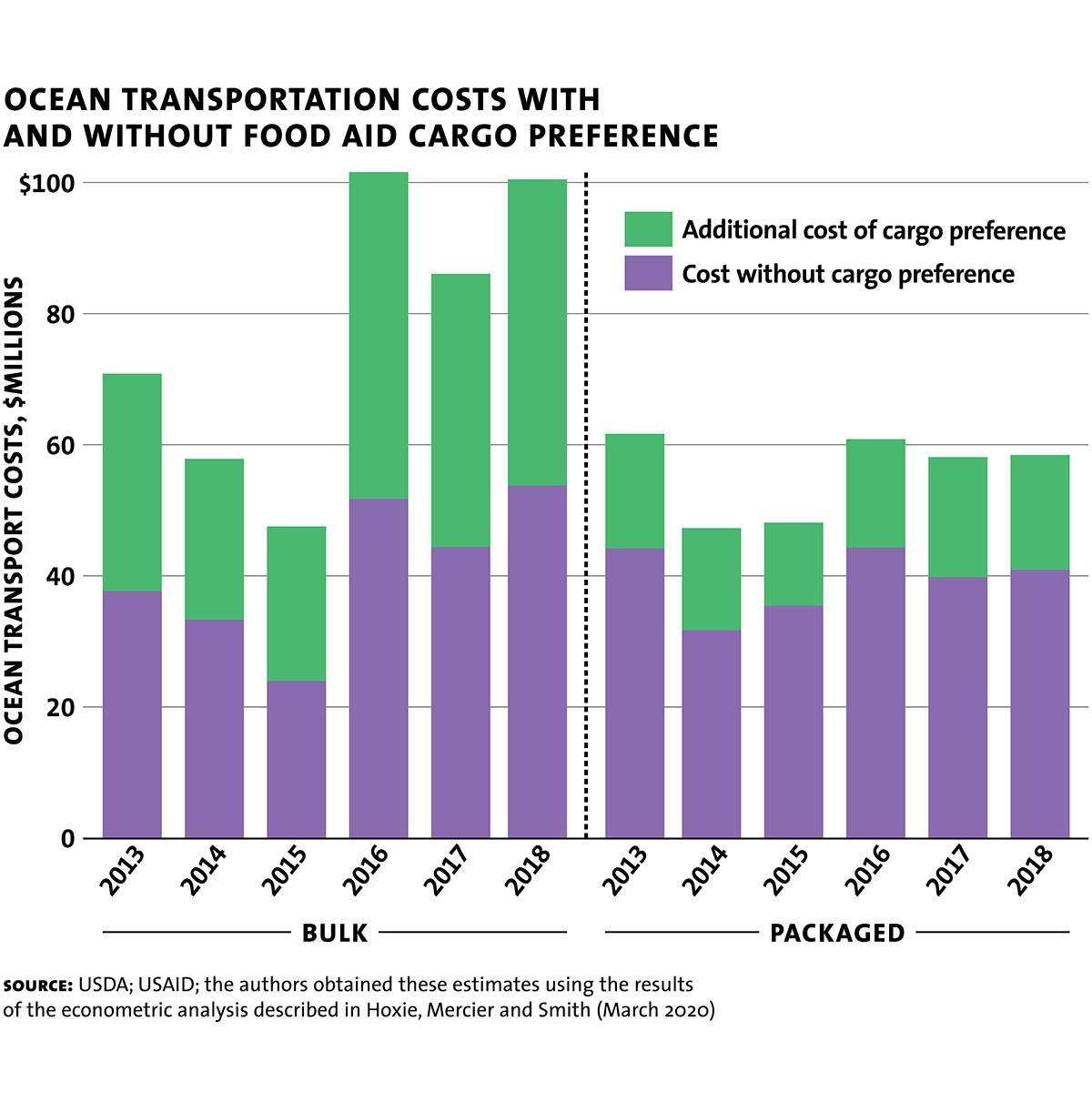 The difference in cargo-preference premiums between bulk and packaged goods shipments is not surprising, since over a dozen vessels are eligible to compete for cargo-preference packaged goods, while only a handful are available to compete for bulk shipments. A back-of-the-envelope calculation suggests that, by itself, the cargo-preference mandate forces USAID to divert funds that would otherwise be available to feed about 2 million people each year — but only provided jobs for about 500 mariners and generated revenues for just 59 vessels between 2013 and 2018.

U.S. maritime unions and domestic shipping companies plainly derive benefits from foodaid cargo preference, although they also obtain substantial economic rents from other forms of cargo preference, including military and other cargo-preference mandates. Cargopreference rules are robustly defended by influential, well-funded lobbies and their own “captured” regulatory agency (i.e., MARAD). However, those lobbies and their friends in government have always cloaked their financial interests within the politically potent but empirically questionable argument that the costs of the restrictions are justified by the need to maintain substantial sealift capacity in case of war.

One problem with this argument is that all ships aren’t created equal. The introduction of steam and the use of ironclad ships long ago created a divide between the needs of the military and vessels optimized for commercial traffic, a divide that widened throughout the first half of the 20th century. However, beginning in the 1950s, the gap became a chasm as containerization became widespread and commercial shipments of most goods were carried on liners and bulk vessels, while the needs of the armed forces shifted heavily toward more specialized vessels.

For example, commercial roll-on roll-off ships are designed to maximize the number of cars the ships can carry. But that design impedes a vessel’s ability to move tanks efficiently. By the same token, as container ships have become larger, they have increasingly relied on specialized port facilities. But the military needs container ships that can operate at ports without container cranes.

This mismatch between the needs of the armed forces and the nature of the vessels demanded by commercial shippers undermines the rationale for most programs that support a commercial fleet and can be drafted for military duty. The armed forces, therefore, maintain their own fleet of logistics ships. And MARAD administers a direct subsidy initiative, the Maritime Security Program, with the objective of guaranteeing access to commercial vessels that are sufficiently flexible to support surge sealift needs.

The military, however, not only needs vessels to carry materials in times of war; it also needs crews. The U.S.-flagged mercantile marine fleet has been in a steady decline for decades, and the number of vessels and seamen have both been decreasing in tandem. As a result, in the activation for Desert Shield and Desert Storm operations in Iraq in 1990/91, about 75 percent of the chartered private-sector vessels used by the military to move cargoes were foreign-flagged ships with foreign crews.

Don’t forget, moreover, that claiming foodaid cargo preference is needed constitutes only one element of the questionable case for using mandates and subsidies to ensure the existence of a civilian shipping fleet capable of doing double duty. National security would in no way be threatened by abandoning food-aid cargo preference. Indeed, if reform made more food available, it could add to the good will and soft power the United States earns from humanitarian efforts abroad.

What Should Congress Do?

If the military really needs commercial ships for sealift and mariners to sail them, it should pay for them. In any event, there is no reason to believe that U.S. ship owners would willingly allow the United States to place their vessels at risk in times of war without significant compensation. In fact, during the 1990/91 Gulf War, U.S. shipping lines complained that carrying cargoes for the military would sacrifice their share of the global commercial market for their services to foreign competitors. Similarly, there is no guarantee that in a time of conflict civilian mariners would volunteer in sufficient numbers to meet the military’s needs. Instead, the defense budget should include funds to allow the military to purchase the ships to meet their sealift needs. By the same token, the armed forces should have a reserve program that provides sufficient incentives to sustain an adequate reserve to crew a sealift surge.

It’s not clear, of course, that any of this is possible. The cargo-preference approach benefits a small group of politically influential people — including well-compensated lobbyists and union seamen, shipping companies with older, technologically outdated vessels that would otherwise be mothballed, and congressional members happy to help out the maritime industry in ways that don’t show up in the government budget. But maybe, if enough light is shone on the actual impacts of the program, legislators can be persuaded to end food-aid cargo preference, a mandate that provides maritime interests with profits and a minimal number of jobs, does almost nothing for (and may even harm) the national interest, but leaves millions more of the poorest children and adults in the world unnecessarily hungry and desperate.