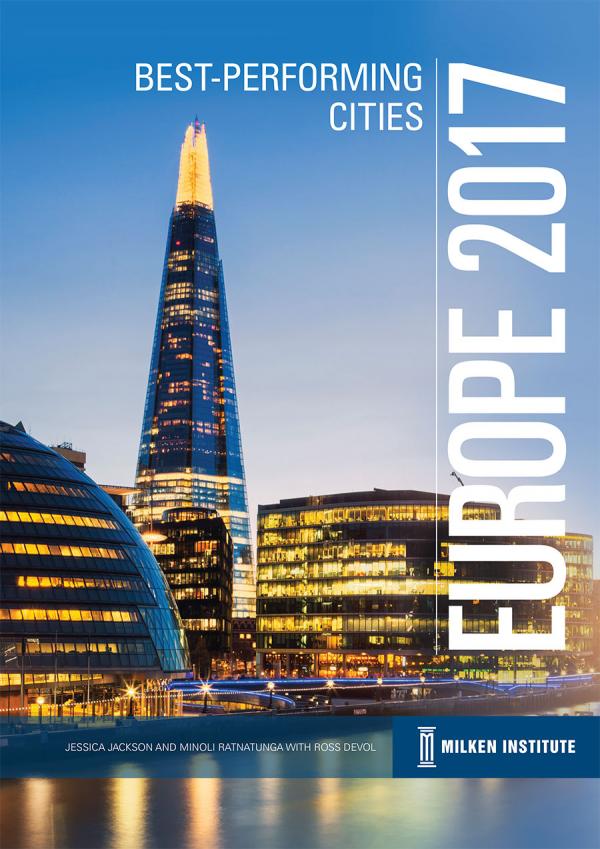 The Institute’s analysis of regional economies continues to break new ground with a ranking for Europe (see below) as well our third assessment of China’s “Best-Performing Cities.” But the granddaddy of them all is “Best-Performing Cities (U.S.),” the annual ranking (now in its 20th edition) of where America’s jobs and growth are created.

The numbers for 2017 were just unveiled, and as pretty much always, there are some surprises here. After years of dominance by the tech hubs of California — and before that by the energy hubs of Texas — the 2017 rankings show the continuing rise of non-coastal cities that once got lost in the clutter. Provo, Utah ranks number 1, while Salt Lake City rounds out the top 10. Between them are Raleigh, North Carolina (2), Dallas, Texas (3) and Fort Collins, Colorado (5) — all taking steps up from 2016. Last year’s first-place city, San Jose, Calif., dropped to 11th, while a remarkable five metros in Florida cracked the top 25.

The Institute capped off a busy year of high-profile meetings and conferences with its seventh annual London Summit in early December. Nearly a thousand movers and shakers attended the program, “New Europe: Lead, Follow or Step Aside.” Some 30 panels and private sessions were devoted to topics ranging from the business case for investing in climate management technology, to weighing the impact of artificial intelligence, to the synergies between philanthropic capital and innovation. Among the 100+ speakers: former UK foreign secretary David Miliband, who is presently head of the International Rescue Committee; former Chancellor of the Exchequer George Osborne; and Canada’s Chief Trade Commissioner, Ailish Campbell.

Timed to the London Summit, in December the Institute released its first-ever “Best-Performing Cities Europe” ranking, with 279 metros across the European Union compared. Top honors went to the area demarcated as Inner London-East, which includes the City of London and neighborhoods to the east (think Canary Wharf) — all thanks to the area’s flexible economy, flourishing information and communication technology sectors, and skilled international workforce. Metro regions in Eastern Europe also did well, with four Polish and two Romanian metros in the top 20. The full results can be found at the Institute website, milkeninstitute.org.

Previous: Economics for the Common... Next: Letter from Colombia