ross devol and sindhu kubendran are, respectively, the chief research officer and a senior research analyst at the Milken Institute.

Dementia, the progressive loss of memory and other mental capacities that is caused by a host of ailments ranging from Alzheimer's disease to Huntington's disease, afflicts some 6.4 million Americans. Adding to the toxic consequences, the scourge does not affect the sexes equally. Women account for fully two-thirds of the cases – a reality generally attributed to the fact that women live longer than men, though recent research suggests there may be biological pathways that lead to greater cognitive impairment in females.

Women bear a doubly disproportionate share of the consequences because they also make up the majority of informal caregivers, often as family members of dementia patients who need round-the-clock assistance with their most basic needs. And this unequal societal burden is almost certain to increase rapidly in light of the explosive rise in the numbers of very old (older than 80) Americans. Indeed, we estimate that the purely pecuniary costs of caring for women with dementia will add up to $5.1 trillion (in 2012 dollars) through 2040. Even if you apply a discount rate to these costs since they extend far into the future, the sum is in the trillions. And that still adds up to real money – not to mention an ocean of human misery.

Clearly, if we don't change the current trajectory by delaying the average age of dementia's onset, slowing its progression and severity and ultimately finding cures for the underlying pathologies, the toll will constitute a major drag on the economy. Moreover, in addition to the financial incentive for narrowing gender disparities, we believe there is a moral obligation to achieve these goals. Such a gender-related health disparity works to aggravate other socioeconomic disparities affecting women and impairs the quality of life for all. 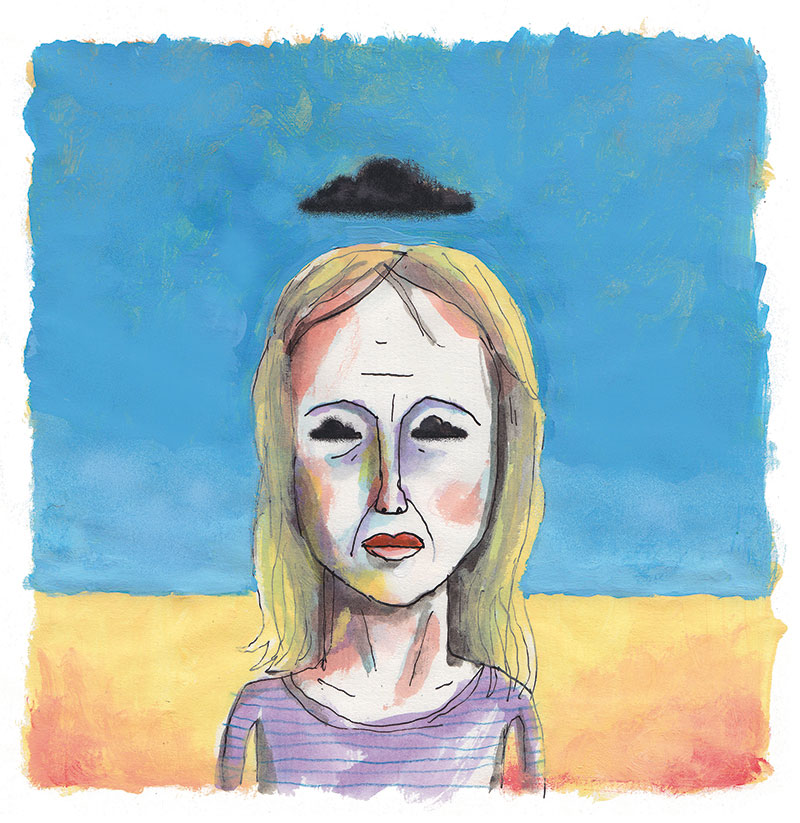 Using data from the Medical Expenditure Panel Survey provided by the Agency for Healthcare Research and Quality, we cataloged the number of dementia cases and the costs of treating dementia, as well as developing estimates for the costs above and beyond treatment. Medical care for dementia is very expensive: direct costs for women run to $6,800 per case per month. But the indirect and unreported costs of care are much, much higher. All told, the overall economic burden borne by women in the United States in 2012 (the latest year in which solid data are available) was $91.1 billion – more than three-quarters of the total cost of dementia. This figure is conservative since it excludes the incremental costs that dementia adds to the treatment of other chronic diseases, such as heart disease, and the detrimental impact on the health of family caregivers.

Note, too, that because dementia in many people is not diagnosed, the numbers are grossly underreported. For example, there is good reason to believe that the actual number of women with dementia is four times higher than the 1.1 million who are officially being treated for dementia-related conditions.

One major cost is the loss of labor available to the economy. The sufferers themselves don't represent much of the loss since the overwhelming majority of patients are old and no longer part of the work force. But the missed workdays (absenteeism) or diminished productivity (presenteeism), or both, of the informal female caregivers is humungous. Of the total of 5.8 million women caregivers in 2012, 60 percent were also employed in the formal work force. Using average GDP per employed person, the combined indirect effect of absenteeism and presenteeism of female caregivers and patients was $43.7 billion that year.

Further, because many caregivers need to work for financial reasons or choose to do so as a means of personal fulfillment, they often make use of adult day care services that are tailored for younger, higher functioning patients. Increased access to better targeted day care could reduce the number of women leaving their jobs to be caregivers. However, nursing homes are the most expensive form of long-term care for dementia patients, averaging $80,000 per year. So, with over 450,000 female dementia patients using nursing homes, the total cost for women with dementia alone was $39 billion in 2012. 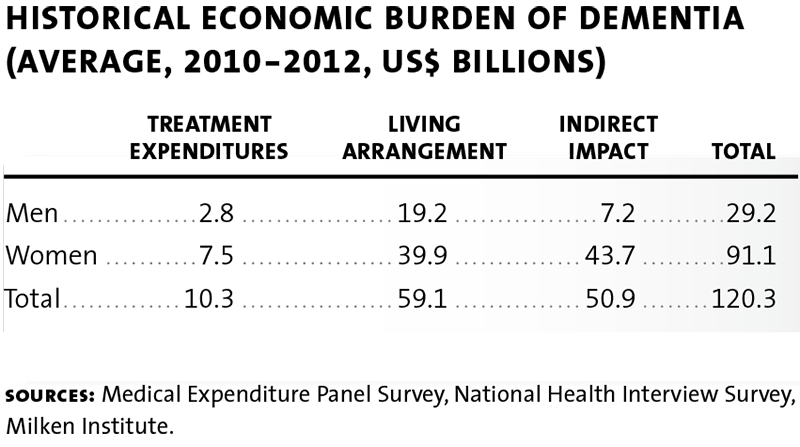 The Mixed Blessing of Longevity

As noted above, because the risk of developing dementia increases rapidly with age, the so-called silver tsunami expected in the United States over the next few decades will accelerate the incidence of the disease. For example, the probability of developing dementia in the 71-to-74 age cohort is 2.8 percent, but jumps to 20.3 percent for individuals in the 85-to-89 cohort. The U.S. Census Bureau projects that the share of Americans aged 65 and over will jump to 20 percent in 2040 from just 13 percent today.

Our dementia-prevalence projection is based on an assortment of studies on the probability of being felled by dementia from a variety of diseases. The associated treatment rates, caregiver demands and living-arrangement utilization rate projections are assumed to be proportional to the growth in the population with the condition. Treatment expenditures per person and the costs of long-term care services are projected to rise commensurate with the growth rate of health care expenditures in excess of the growth rate in nominal GDP, based on projections from the Centers for Medicare & Medicaid Services. The indirect labor market effects from lost work hours and lower productivity are based on forecasts of gains in GDP per employee.

By 2040, we project that the number of women afflicted with dementia will more than double, to 8.3 million. Women who become informal caregivers will jump to 11.2 million. Annual dementia-related health expenditures for women will approach $25 billion, while long-term care costs for these women will exceed $130 billion in 2040. The indirect labor market effects from the diversion of women to the role of informal caregivers will result in a GDP loss of some $119 billion. Thus, the combined figures for treatment, living arrangements and indirect impacts increase the annual economic burden on women to about $274 billion in 2040, three times the figure for 2012. The total economic burden, including the burden from dementia in men, rises to $367 billion in 2040.

It will take a concerted effort on various fronts to tackle dementia effectively. To that end, we suggest five goals for public policy.

Train More Specialized Caregivers. The current shortage of health care professionals trained in geriatrics will only be exacerbated as dementia cases rise. A wide range of medical professionals, including, but not limited to, doctors and nurses, is needed. But giving them incentives to join this battle will require substantial financial resources and falls outside the traditional definition of health care costs associated with a disease.

Expand the Scope and Flow of Services. Until cures for the underlying ailments are found or more efficacious treatments are available, an expansion in the scope of health care is needed to improve coordination between long-term care services and other social services. As dementia patients' cognitive functions deteriorate, families providing informal care require more professional long-term care services to assist with activities of daily living. Increasing insurance coverage for long-term care services such as nursing home and adult day care services, as well as making long-term care insurance more affordable, could reduce the burden on individual families and minimize labor market side effects. Enhanced coordination of care between the health care system and the community is now being incorporated into new models of health care delivery, such as the patient-centered medical home.

Raise Dementia Awareness and Expand Family Caregiver Training. Dementia is undiagnosed in a significant percentage of people living with it, which means they aren't receiving treatment that could slow its progression or minimize the side effects. Thus, raising public awareness of the signs of dementia and better communicating the steps toward diagnosis should be a priority. Earlier diagnosis could also provide opportunities for better informal caregiver training and reduce caregiver stress, which would cut absenteeism and presenteeism in the workplace. In addition, greater public awareness could encourage employers to offer elder care in the workplace as a fringe benefit, the way they now offer child care in order to retain employees and raise their productivity.

Provide Support in the Workplace. As women's participation in the labor force has risen, the demands on women as caregivers at home have become ever more stressful. Modest financial assistance from employers or government could allow informal caregivers to buy care services and thus remain employed, especially in cases where dementia is not yet severe. Simply raising awareness and understanding in the workplace would reduce disparities for women. If a policy change could result in a 60 percent reduction in lost workdays for women caregivers, it would boost GDP by a cumulative $776 billion (in 2012 dollars) through 2040.

Increase Funding for Research for Alzheimer's and Other Sources of Dementia. Since past drug trials have largely been unsuccessful, many pharmas have cut or eliminated R&D on dementia. What seems to be most needed at this point to aid drug development and other ameliorating medical technologies is basic research on how the brain works. And understanding may be on the way. A Harvard team reported (in the journal Science Translational Medicine) that they suspected that the brain plaque associated with Alzheimer's may be caused by the body's successful attempt to fight off a virus, fungus or bacterium that finds its way to the brain. The 2016 budget bill that Congress passed contained a $350 million increase in funding for dementia research at the National Institutes of Health. That is a good down payment, but more should be done in funding core research.

The potential payoff is immense. We simulated an alternative future in which R&D yielded a novel medical technology that reduced dementia prevalence by 20 percent, compared with its current trajectory. We chose 2025 as a starting point because the cycle of invention and testing averages 13 years before a new therapy is approved. All other assumptions for projecting treatment costs, living arrangements and labor market effects were maintained at the same levels. This scenario would result in 1.7 million fewer female patients by 2040. And that reduction would save a cumulative $33 billion in treatment expenditures and $170 billion in living arrangement costs, while boosting GDP by over $170 billion. That translates to a cumulative benefit of $374 billion, measured in 2012 dollars.

Faced with this blizzard of numbers, it's easy to lose sight of the bottom line. But a few points are clear enough. Dementia is a scourge on society – and an especially cruel scourge because the incidence is bound to grow rapidly and constitutes yet another burden on women struggling for equality in the workplace while maintaining their role as keepers of the family. Indeed, it's hard to think of a medical condition in which the potential payoff from even marginal improvements in treatment would be so large to both society and to the innovators.

But we're not close to a cure for most of the diseases that cause dementia. And in the meantime, a big investment in care alternatives that reduce the load on women who come home from work to a dementia sufferer ought to be a high priority.