ross devol is the chief research officer of the Milken Institute. This piece is based on a more technical analysis of Japan's economic prospects available at www.milkeninstitute.org.

Anyone who came of age in the 1970s and early 1980s was taught that Japan was an unstoppable economic growth machine, a model for other countries to emulate. With the benefit of hindsight, of course, that conventional wisdom seems ironic. For Japan was about to be undone by asset bubbles and two "lost decades" of stagnation – a reversal that left Japan the model for what not to do in order to grow.

With the fall came the revisionist history. Previously dazzled analysts remembered that postwar Japan's stellar economic performance was largely attributable to high savings rates and catch-up from the destruction of war, both of which were self-limiting. Another underappreciated factor was Japan's untenable demographic path. Thanks to a fertility rate below replacement value and an unwillingness to allow immigration, the population quickly aged and eventually the labor force began to decline. Aging, in turn, accelerated the inevitable trend toward the demand for services, where productivity is almost always lower than in manufacturing and the economic culture is more resistant to competitively driven change.

"Japan Inc.," a term coined to celebrate the strength of Japan's top-down corporate culture and its cozy relationship with government, became a symbol of Japan's immense inertia. The government was slow to force insolvent businesses into liquidation. Regulation designed to protect all manner of insiders from competitive challenges seemed impervious to critics. Ineffective macroeconomic stimulus policies built around wasteful "bridge to nowhere" infrastructure spending remained in place because it kept the pork barrel full.

But 2012 marked a sea change of sorts, a moment in which popular frustration with stagnation, and perhaps fear of being made economically and politically irrelevant in Asia by China, trumped inertia. Enter Shinzo Abe, a politician with a checkered career, who was elected prime minister on a platform of in-your-face nationalism and (more relevant here) an aggressive set of policies designed to restore economic growth and break the grip of deflation – policies soon to be termed "Abenomics."

Abenomics is often described as the "three-arrow policy." The three-arrow reference comes from an old legend from the prefecture of Yamaguchi, from whence Abe hails. The story is about a lord who asked each of his three sons to break an arrow, a task easily performed. Next, he produced three more arrows and told each son to snap all three together. They couldn't. The moral of the tale: Work alone and the group is weak, but work together and the clan is strong. (It must sound better in Japanese.) 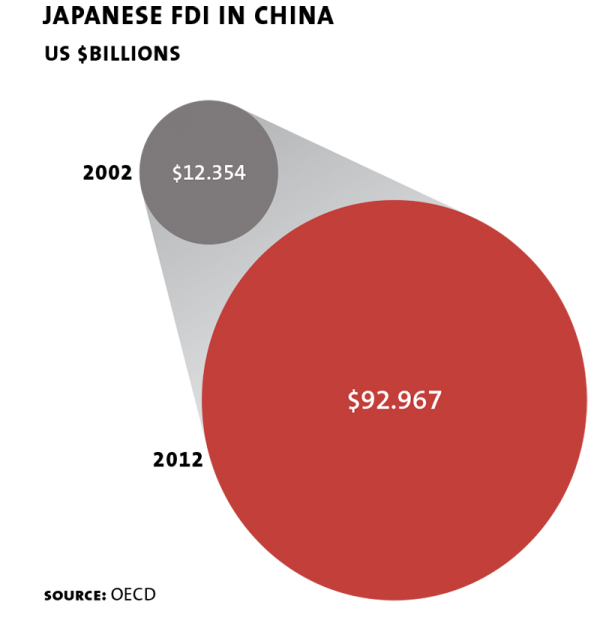 Abe appointed Haruhiko Kuroda, head of the Asian Development Bank, to run the Bank of Japan with the goal of implementing aggressive monetary expansion. Kuroda had long been a critic of the Bank of Japan's half-hearted attempts to stimulate the economy.

The BOJ's new Abe-friendly policy board adopted an inflation target (2 percent), a first for Japan. It also committed to doubling the monetary base over two years. This is an ambitious step – though the change is notably less than the Federal Reserve and the Bank of England implemented during the global financial crisis. Most important, the BOJ widened the range of government bonds that it is purchasing to include all maturities, with the goal of lengthening the average duration of its assets from three years to seven. Further, it is purchasing private assets, mainly real estate investment trust securities and exchange-traded funds, in an effort to stimulate economic activity more directly.

The monetary bazooka has already had an impact. Consumer prices have stopped falling. And the exchange value of the yen against the dollar has declined by one-fourth, making Japan's exports (and domestic goods that compete with imports) more attractive.

Some international finance officials – among others, Brazil's finance minister, Guido Mantaga – believe that Japan is engaging in a "currency war," an attempt to "beggar its neighbors" by making its exports more competitive in global markets at the expense of other countries' products.

Japan's policy, however, doesn't fit neatly into the conventional currency-war mold because officials aren't directly intervening in foreign exchange markets to depreciate the yen. Japanese officials argue that they are pursuing an expansionary domestic monetary policy in order to end deflation and push down real interest rates. So far, most advanced economies are willing to give Abe's policymakers a pass on the issue, though that may change if Japan's export growth plainly hurts competitors.

Yen depreciation could increase Japan's growth rate through the relative price impact on foreign trade or by giving Japanese consumers incentives to buy domestic goods. But calculating the timing or overall impact of these two channels is not straightforward.

Japanese firms selling into foreign markets may decide not to pass through the full amount of their added cost advantage. By the same token, foreign firms may choose to hang on to market share by cutting prices and accepting narrower profit margins at least temporarily.

Note, too, that the timing of changes in trade flows in response to fluctuations in exchange rates depends on past investment in domestic and foreign capacity. For example, Japanese firms responded to the past appreciation of the yen by building factories in China to serve third markets. Indeed, Japan's foreign direct investment in China rose from $12.4 billion in 2002 to $93 billion in 2012. Japan's exports thus may not respond with alacrity when the yen depreciates because the economy may now lack the domestic capacity to capitalize on a currency advantage.

But caution in drawing conclusions is warranted because many factors other than yen depreciation have affected Japan's trade flows in those 18 months. For example, Japan's energy imports have surged in the wake of the shutdown of the country's nuclear power plants. Moreover, the rise in other imports may have been related to anticipation of a sales tax increase in April.

One often overlooked explanation for the weakness in Japan's exports of manufactured products has been higher prices and curtailed supplies of electricity attributable to the Fukushima disaster. Rolling blackouts were initiated, and, effectively, a rationing system was implemented. In this environment, Japanese firms were reluctant to bring production back home and foreign multinationals didn't invest in productive capacity in Japan.

Other factors can be added to the mix. It's hard to increase exports very much in a period in which total world trade growth has been slow. Another confounding factor: the protracted effect of a Chinese boycott of Japanese goods in the wake of Abe's provocative visit to the Yasukuni shrine to pay respect to Japan's war dead. The share of Japanese vehicles sold in the Chinese market fell from 20 percent in October 2012 to just 8 percent a year later.

But as our own research (available on the Milken Institute website), corroborates, there is a long lag between changes in the value of the yen and its ultimate impact on trade flows, investment and economic performance. In other words, we shouldn't have expected a rapid response to yen depreciation. And the most recent data suggest that Japan's exports are, in fact, beginning to rise. 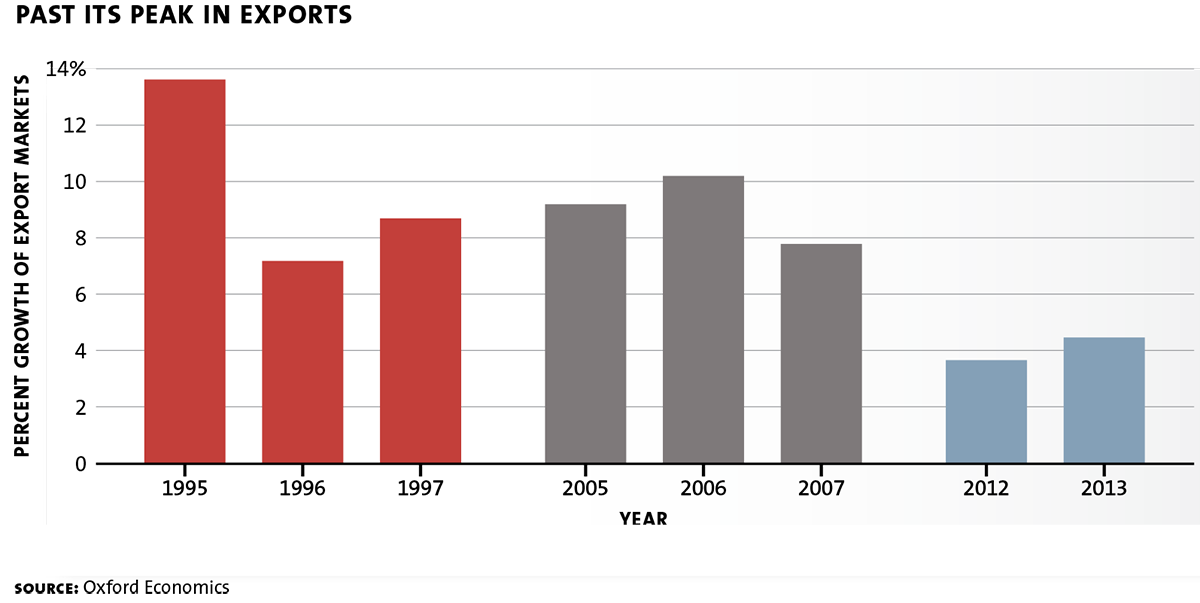 The Abe administration's first budget included an infrastructure package equal to about two percent of GDP, with construction of earthquake-resistant bridges, roads and tunnels to repair the damage wrought by the 2011 catastrophe on the top of the list. That's real money, but little more than would probably have been spent if Abe had lost.

The second tranche of the fiscal package actually amounts to a net negative, since spending will be more than offset by an increase in consumption taxes over a two-year period. This is a reflection of the pressure to reduce the budget deficit and to slow the growth of the government debt, now the largest among advanced industrial countries. And, of course, it reduces the prospects that Abenomics will break Japan free from stagnation. But analysts note that the back-loaded nature of the tax increase will give the government an opportunity to back out if the economy goes south.

Monetary and fiscal policy can go only so far. To fundamentally alter the long-term trajectory of the Japanese economy, bold structural reforms will be necessary to increase potential GDP. And these "third arrow" reforms have been lacking. This is all the more disappointing, as Abe's Liberal Democratic Party controls both chambers of the Diet. If he can't beat back interest-group opposition in his own party between elections, the prospects for success in an election year seem modest at best.

With the working-age population set to decline, ways must be found to push the labor force participation rate higher. That shouldn't be so difficult: the female participation rate is substantially below that of other wealthy OECD member nations. But disappointingly few Japanese women seem inclined to work after childbirth.

The LDP has come around to adopting a more liberal view on female involvement in the labor force since Abe was first elected prime minister in 2005. Opposition at that time was based on the idea that it would lead to the disintegration of the traditional family and push the fertility rate – already well below the rate needed to maintain a stable population – even lower. But reforms weren't enacted, and the fertility rate fell further anyway.

Among measures that could make a difference: increasing the hours that women can work before being subjected to a higher marginal income tax rate, providing more state-supported day care, making it more acceptable to breast-feed babies in the office, and pressuring companies to promote women to positions of greater responsibility.

Another area ripe for reform is government-induced labor market rigidity. Many large firms are reluctant to hire more workers because it is so costly to lay them off. Meanwhile, government barriers to starting new businesses can be stifling. Reforms here could help to solve Japan's chronic problem in stimulating technological change through the medium of start-ups.

Abe has entered the Trans-Pacific Partnership negotiations with other Pacific Rim counties and seems committed to removing trade barriers. But to succeed he will have to break the hold of notoriously inefficient rice farmers, who till tiny plots of land at very high cost.

In a best-of-plausible-worlds scenario, we estimate that the overall labor force participation rate would rise by six percentage points. Nevertheless, even with this addition to the labor force, total employment would decline from 63.4 million in 2014 to 61 million in 2023 because of population aging. But that net loss could be more than offset by a business-friendlier environment that increased investment.

In that relatively rosy scenario, Japan's GDP would grow at an average rate of 1.6 percent annually over the next decade – 0.6 percentage points higher than in the baseline projection. Not much you say? I disagree: for a mature industrialized economy in which both the labor force and the total population are declining, it would be an impressive performance.

A Last Thought or Two

Japan has a historical knack for making comebacks when the odds seem longest. And it just might be about to happen again: after two decades of lost growth, the stars may be lining up for a surge.

The first two arrows of Abenomics have been launched, arguably providing the macroeconomic prerequisites for growth. Much, however, depends on the third arrow, structural reforms, where a depressing number of Abe's predecessors have been unable to summon the political will to make change happen.

A revitalized Japanese economy is, of course, critical to the well-being of a nation that must support an aging population. But Japan's success would also have positive ramifications for Southeast Asia, which is becoming highly dependent on the Chinese colossus. And in the process, the burden on the United States to serve as a geopolitical counterweight to China would diminish.

Wish Abe well. Japan's future and our own are inextricably tied.