While 2018 was a year of economic revival with historically low unemployment and rising wages, demographic indicators stand in stark contrast, seemingly ushering in an era of population stagnation.

The Census Bureau’s latest figures on U.S. population change (for the year ending last July) show that growth is at its lowest since 1937, a result of declines in the number of births and gains in the number of deaths, as well as the fact that the nation’s under-18 population has declined since the last census. This is on the heels of data showing geographic mobility within the country is at a historic low. And while the population of some states — particularly in the Mountain West —is still growing rapidly, nearly a fifth of all states suffered negative growth over the past two years.

Moreover, while some of these downward demographic trends reflect the delayed impact of the Great Recession, inexorable population aging is at the heart of the matter. This is certain to force major changes in the economy and society for decades to come.

The population growth rate of 0.62 percent for 2017-18 is the lowest in 80 years. While growth has fluctuated to the tune of wars, economic upheavals, baby booms and baby busts, the current rate reflects a trend that can’t be attributed to dislocation caused by the Great Recession. 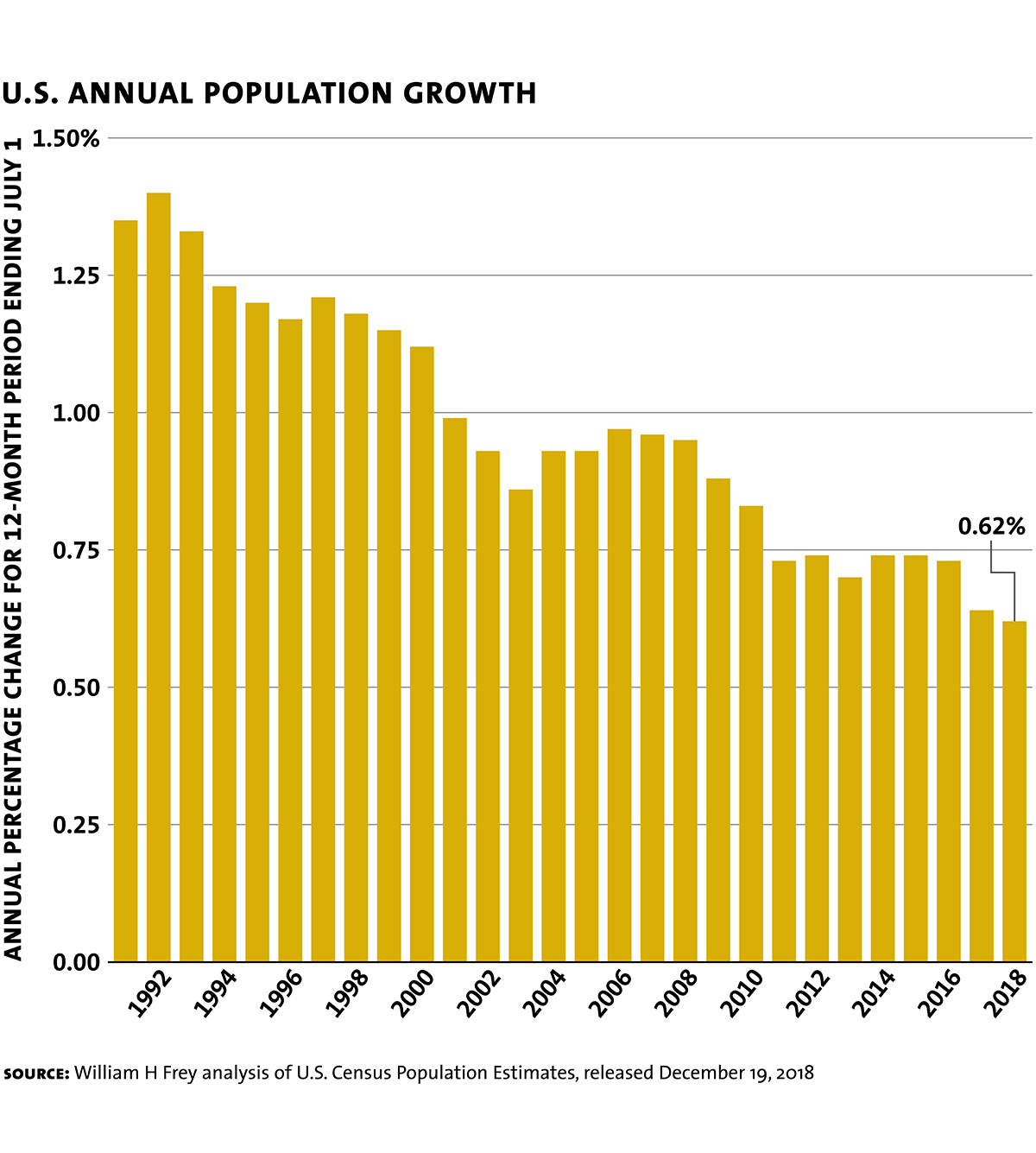 The decade-long decline did initially reflect slowing immigration as well as a lower “natural increase” (i.e., births minus deaths) in the wake of the financial crash. But immigration has recovered a bit in the past few years. So natural increase, which tumbled from 1.6 million in 2000-1 to just above 1 million in 2017-18, has been disproportionately responsible for the overall decline in growth. 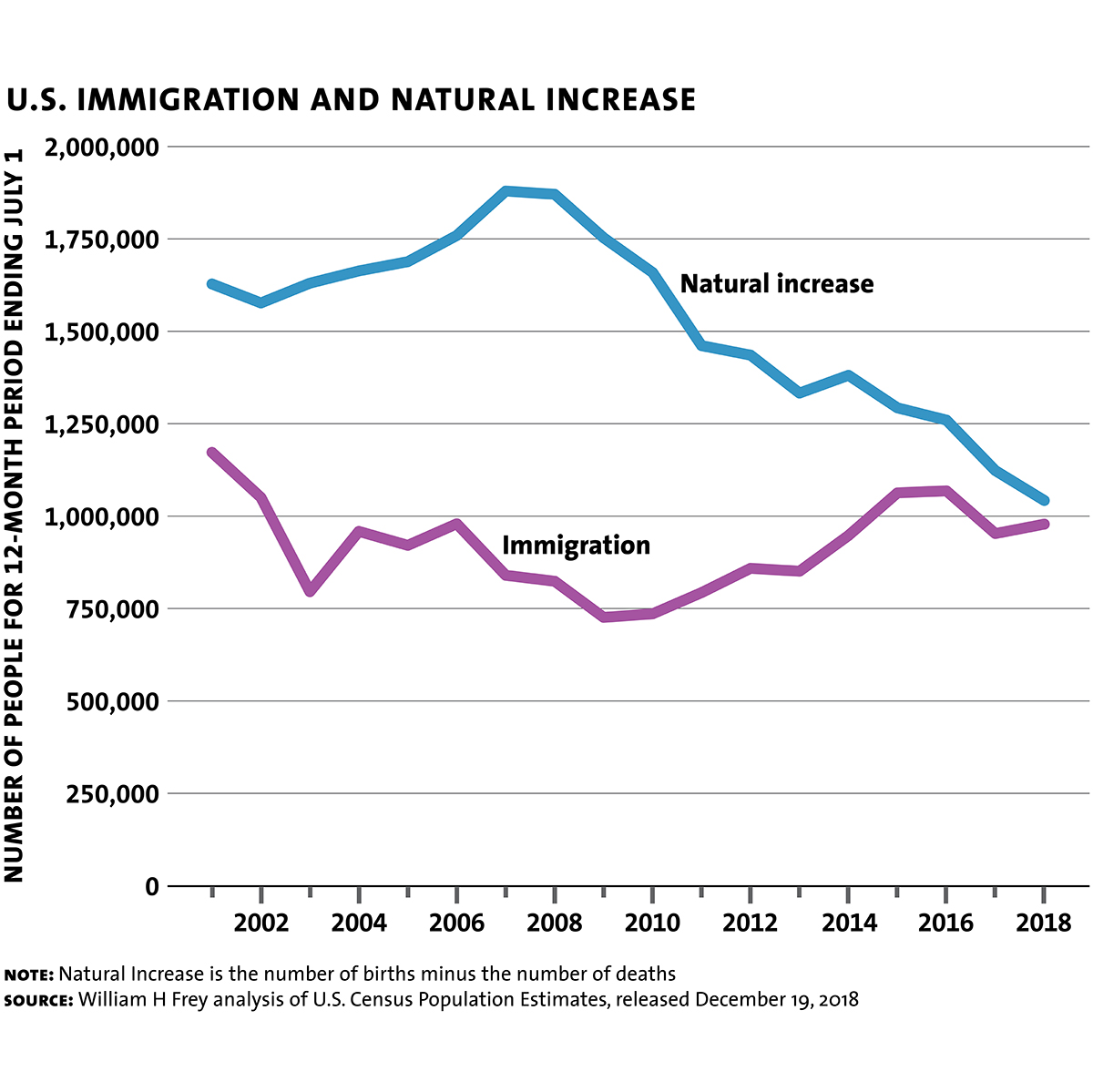 Declining births may have been accentuated by young adult millennials, who may be postponing having kids because they are still trying to get back to the income track upended by the Great Recession. And some of them may still play catch-up on the baby front. But a reversal in the decline is simply not in the cards because as the population ages proportionately fewer women will remain in their childbearing years.

The rise in deaths is more directly related to overall aging. And Census Bureau projections imply this phenomenon will largely explain reductions in the nation’s natural population increase in coming decades.

The Census estimates show that between 2010 and 2018, the nation’s under-18 population declined by 780,000 (1 percent of the age group), while the adult population grew by 19.2 million (8 percent). Indeed, the child population declined in 29 states. Vermont, New Hampshire and Connecticut all lost 10 percent or more, while 11 states lost more than 5 percent. (There were still some gainers, though — notably, Texas, Utah, Florida, Washington, Idaho, and North and South Dakota.)

One demographic indicator you would expect to pick up in a rebounding economy is geographic mobility as more people are willing and able to seek greener pastures (or at least nicer houses). Yet the latest data for 2017-18 show that the percentage of Americans changing residence within the year is at a post-World War II low of 10.1 percent, continuing a relentless decline that goes back decades. Indeed, the current rate is less than half the rate the nation experienced in the 1950s. 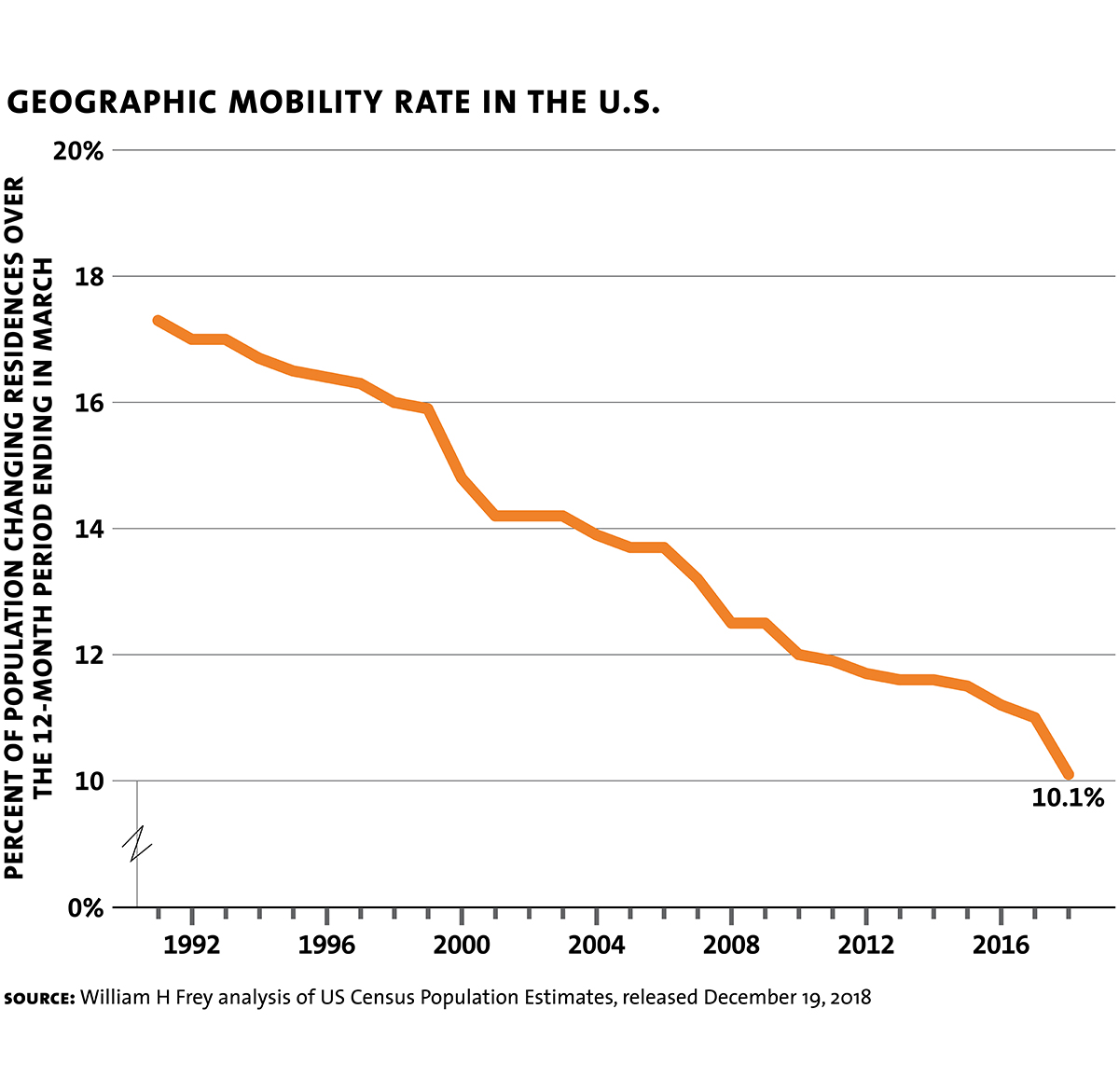 The bulk of this downturn is attributable to local (within-county) moves, which also registered a postwar low, and could possibly be related to the “stuck in place” millennials — specifically, the “older millennial” 25- to 34-year-old age group, which seems to be particularly disinclined to move. But in 2018 the downward trend spread to inter-county and interstate migration — just the opposite of what one might expect in a newly buoyant labor market that should give job-seekers the confidence to pull up roots.

The overall population growth slowdown did not occur in all parts of the country. Two states, Nevada and Idaho, grew by more than 2 percent between 2017 and 2018 — continuing a new boom in the Mountain West, which took a growth hit earlier in the decade. Among the 14 states gaining more than 1 percent in population, all except South Dakota were located in the South and West.

The bigger story in the past two years is the number of states that lost population: 10 in 2016-17 and nine this year, compared with only a few earlier in the decade. These are states where the current rate of natural increase combined with immigration could not offset migration to other parts of the country. They include both small-population states (Wyoming, Alaska, Hawaii, Louisiana, Mississippi and West Virginia) and large urbanized states (New York and Illinois). Indeed, Illinois lost residents for the fifth straight year. As natural increase dwindles, all states will rely more heavily on in-migration from the rest of the U.S. along with immigration of foreign nationals to fuel population growth or stave off declines.

The new census numbers accent the value of thinking ahead as great demographic forces slow (and perhaps stop) natural population increase. The 0.62 percent figure for overall population growth is noticeably below what we have experienced in decades prior. And while it remains far higher than in rich countries ranging from Germany to Italy to Japan, it means that policymakers will have to deal with both caring for a larger and more dependent aging population and managing a chronic scarcity in labor.

It is a truism that resentment of immigrants has helped fuel the rise of nativism across the developed world. But, ironically, the only plausible way to manage the transition to an aging population is to look to immigrants to fill the gaps in the labor force and to sustain America as a wellspring of technological and cultural innovation.