A solution in search of a problem?

ed dolan, the creator of Ed Dolan’s Econ Blog, is a senior fellow at Niskanen Center.

By conventional measures the U.S. job market is going gangbusters. The official unemployment rate is at a 50-year low, and job openings exceed the number of people looking for work. But that’s hardly the whole story: a lot of joblessness lurks behind the rosy numbers.

As of May 2019, some 5.5 million people who say they want work are not counted as officially unemployed because they were not actively seeking a paying job. Moreover, another 4.2 million were working part time but would prefer full time. As the figure documents, even a decade into the recovery from the recession, a large gap remains between the official unemployment rate and broader measures that include some or all of the concealed unemployed. 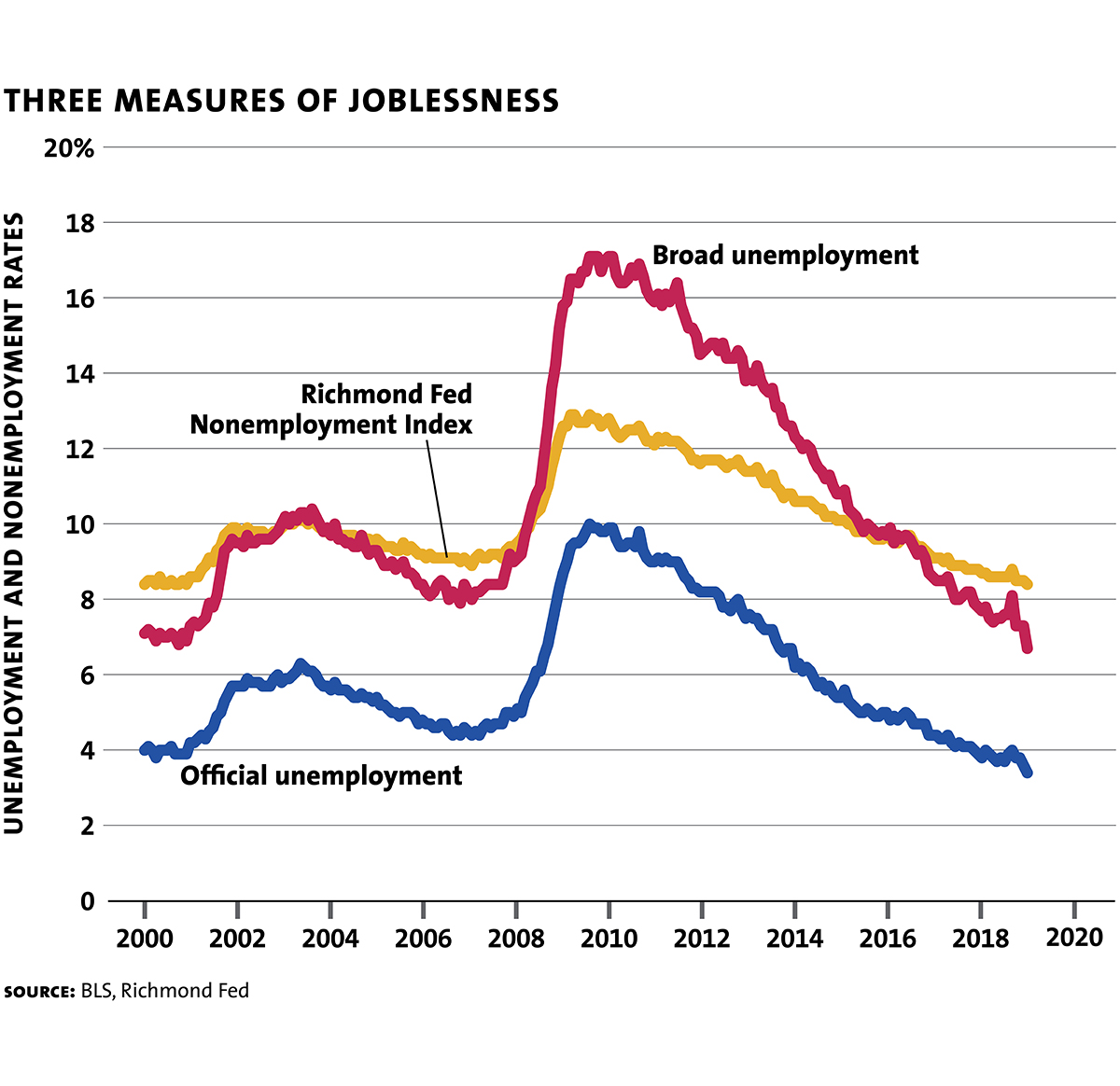 Can nothing be done? Frustrated with the persistence of hidden unemployment, an increasing number of analysts on the left are calling for an end to employment policy as usual. Why not just have the government directly offer a job at a living wage — a job guarantee — to anyone who wants one? The idea is hardly radical. It goes back at least as far as the Great Depression of the 1930s, when Washington created millions of jobs through New Deal programs — notably, the Works Progress Administration and Civilian Conservation Corps. Today, the job guarantee has taken on new life as a core element of the Green New Deal, which has been endorsed by several Democratic presidential candidates. (See here and here for detailed job-guarantee proposals.)

One key consideration here: The effectiveness of a job guarantee would depend on just who today’s hidden unemployed really are. Job-guarantee advocates see them as all the people who are ready, willing and able to work. Certainly, many people do fit that pattern. Factory workers displaced by trade with China and other low-wage countries are in the mix. One study found that in regions hit by plant closings, local labor markets adjust slowly, with low wages and high unemployment persisting for a decade or more. Workers who face job-market discrimination are another group in the category. Racial minorities, immigrants, the disabled and — a big one — the formerly incarcerated would no longer find themselves out of luck if government jobs were available to all.

The problem, though, is that not all of today’s 10 million non-employed and underemployed are truly ready, willing and able. Indeed, some don’t even need to work.

Readiness. Not all ofthe 5.5 million people who are currently outside the labor force but say they want a job are immediately available for work. As of May 2019, 15 percent of them were not available for work right now. Another 19 percent indicated that their ability to take a job was hampered by family responsibilities, ill health, school, transportation problems or other factors. Altogether, it appears that about a third of the 5.5 million would find it difficult or impossible to accept job-guarantee employment tomorrow if it were offered.

Willingness. Those 5.5 million people vary in the persistence of their desire for work. Usually, the Bureau of Labor Statistics just asks whether they want a job, not how strongly they want one. However, a special BLS study gives some clues. That study tracked the 1995 labor market status of people who had been out of the workforce but wanted a job as of 1994. It found that 30.8 percent of them had found a job by 1995, while another 42.2 percent said they no longer wanted to work.

If 73 percent of the hidden unemployed either find work on their own within a year or change their mind about wanting to work, is a massive government program like a full-scale job guarantee really warranted?

Those numbers should give us pause. If 73 percent of the hidden unemployed either find work on their own within a year or change their mind about wanting to work, is a massive government program like a full-scale job guarantee really warranted?

Indeed, while many people who want to work but can’t find a job suffer serious financial stress, that is not true for all of them. Consider the results of a survey of non-employed who said they wanted a job that was conducted in 2014 by the Kaiser Family Foundation, the New York Times, and CBS News:

Presumably, many of those who reported low financial distress despite lack of work were living in households where someone else had a steady income. The survey covered only prime-age individuals aged 25 to 54. If such a study were extended to other age groups, it would no doubt find students living at home and retired people looking for some kind of work to keep themselves active.

Ability. As of April 2019, the BLS reported that there were 7.4 million job openings in the U.S. economy, more than the 5.8 million workers who were officially unemployed. That suggests there are factors other than a simple lack of jobs that make it hard for many people to find steady work.

In some cases, the main barrier is a lack of skills. Job-guarantee advocates recognize that their program should offer jobs suitable for low-skilled workers and should offer basic job training. However, education and training are not the whole story. Criminal records, unstable housing, substance abuse, family situations that interfere with regular work schedules and borderline mental and physical conditions that fall short of actual disability make it hard for many people to succeed at jobs if they do find them.

Experience shows that support services are a key to good results. For example, one study of programs in California that were specifically tailored for the needs of the hard-to-employ found it necessary to offer not only job-related training but also general training in job readiness and personal finance skills; assistance with clothing, transportation and housing; food pantries and nutritional education; counseling to avoid relapse into drug dependency or criminal behaviors; and education regarding public benefits and tax preparation. Even so, only about half the participants actually achieved the goal of self-sufficiency.

There’s no doubt that some of the working-age adults who don’t have jobs would benefit from a job guarantee. But there is also little doubt that the magnitude of the problem is smaller and the cost of implementing a successful job-guarantee program would be greater than advocates generally acknowledge. At a minimum, they need take the next step, nailing down realistic estimates of the costs and benefits of a job guarantee. Meanwhile, the debate over job guarantees should not be allowed to distract from consideration of other, more targeted programs to relieve poverty and joblessness, such as improved programs of cash assistance and wider eligibility for wage subsidies and tax credits.