Journalism in the Age of Page Views

A review of All the News That’s Fit to Click: How Metrics Are Transforming the Work of Journalists 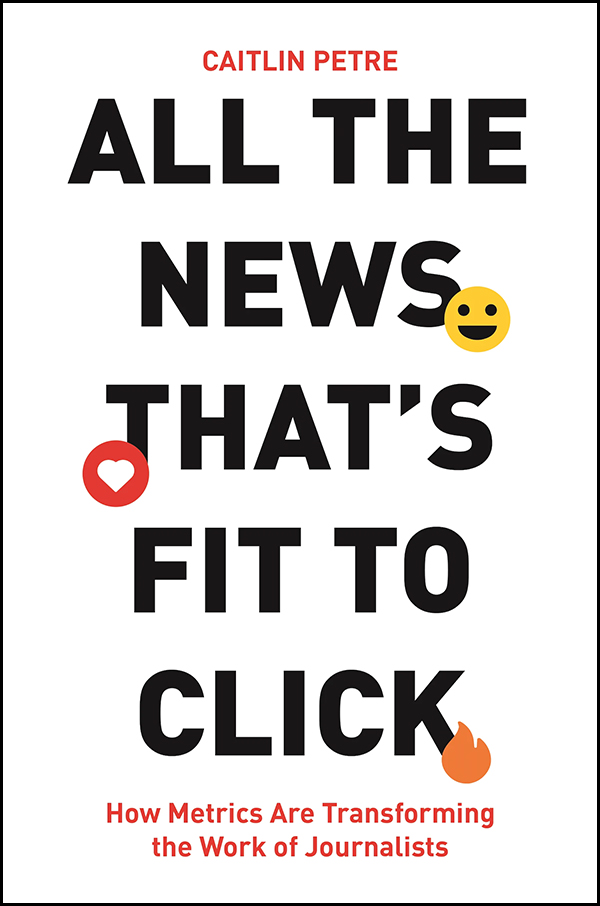 All the News That’s Fit to Click:
How Metrics Are Transforming the Work
of Journalists

Caitlin Petre, a teacher of media studies at Rutgers, has delved into the impact of a technological revolution on the working conditions of journalists at the (pre-bankruptcy) Gawker and The New York Times, along with the operation of one of the leading services for measuring reader engagement, called Chartbeat.

Chartbeat may be unfamiliar. Subscribers can discover how many people are reading their publications online, along with their geographic locations, their external source of referral if any, how long they spent reading each story, how frequently they visit, how active they are as readers of an article (as measured by an interaction every five seconds or so) — and as they used to say, much, much more. Indeed, as the pun in the service’s name implies, it is like one of those hospital bedside monitoring devices in an era when clicks (and corresponding advertising and subscription revenue) assay the health of a publication.

The significance of data supplied by Chartbeat and its major competitor, Google Analytics, is, Petre notes, ambiguous — unlike old-style metrics like miles driven or sales booked. Is it better to have the largest number of page views per staff member, for example, thereby creating an incentive to publish as many pieces or as possible? Or is it more important to publish fewer pieces receiving more careful reader attention and more circulation on social media? Should management share statistics freely with each journalist, or should they be kept relative confidential?

From the reporter’s point of view, metrics can be a threat to professional identity. Recall the sort of work analysis developed by the industrial efficiency engineer Frederick Winslow Taylor in the early 20th century. Before enthusiasm cooled, “Taylorism” swept not only U.S. industry, but even Soviet plants emulating American mass production. In both cases, managers worked out a single “best way” and indoctrinated often-unhappy workers to follow it.

In studying journalists and other educated professionals, there is no simple script for writing a story like Taylor’s famous study of optimizing manual coal-handling with special shovels and ergonomically optimal motions. (Or satirizing it, as in Charlie Chaplin’s Modern Times). It is up to journalists to adapt their writing strategies to build audience engagement and advertising revenue. Twenty-first century managers thus seem to get best results when they present dashboards like Chartbeat as challenges to journalists’ ingenuity and creativity that offer the great advantage of offering virtually instant digital feedback.

This is part of the trend called “gamification,” like promoting the users of the Google-owned, socially driven Waze navigation app from “baby” to “royalty” in return for mileage clocked and (unpaid) editorial work offering traffic alerts. Reflecting good game design, Chartbeat accentuates good news and presents data in a way that respects journalists’ professional identities. Petre notes that, to many journalists, an icon of a broken odometer — an off-the-chart needle — validates their professional judgement by dramatizing, even “reenchanting” what they have been intuitively doing right.

One of Petre’s most interesting observations is that in this new, digitally monitored game of journalism, writers and editors share ideas about the boundary between “clean” and “dirty” pursuit of page views. Despite the freewheeling style of Gawker’s founder Nick Denton, its staff members had only scorn for other sites’ tactics like counting every slide on a slideshow as a separate visit. New York Times editors were, of course, equally scornful.

Another insight concerned the Times itself. As a reader of both the HTML and print versions of the Grey Lady, I have detected a double personality — and Petre’s research confirms this. Gawker editors shared detailed statistics collection with the publication’s individual writers — presumably to discover whether their page views justified their salaries, to put it crudely. Times editors, for their part, practice (in Petre’s words) “information containment,” revealing metrics to reporters only when it suits a managerial objective like increasing morale. This is symptomatic, Petre believes, of the hierarchical culture of the Times and of the superior status it continues to attach to its print edition despite management’s belief in a digital future. In any case, the author has observed that metrics were used mainly to confirm editors’ existing judgements.

Petre thus finds more to admire in the freewheeling Gawker that she studied than in the Times, where information asymmetry between masthead editors and the rank-and-file impeded the latter’s ability to assert collective power. She points out that the American Newspaper Publishers Association supports the classification of journalists as professionals, while their major union, the Newspaper Guild, prefers the status of workers. She is cautiously hopeful that greater access to data may help equalize power in the newsroom.

Because Petre’s field work began in the dark ages of 2013, she brings the industry up to date in her concluding chapter — notably on the forced sale of Gawker Media in 2016 after a $140 million judgment against it in favor of former wrestler Hulk Hogan (Terry Bollea) after a lawsuit secretly financed by Facebook co-founder Peter Thiel. That very event, which came as a surprise to most First Amendment experts who had followed the trial, raises a question outside the scope of Petre’s book. Was not that blow to freedom of the press the consequence of pursuing metrics and the revenue that they brought?

Metrics — whether dashboards or statistics of likes and retweets — have entered the lifeblood of journalism as people are energized by antipathy. Petre’s concern is the professional ethos of journalists dealing with management, but they have other bosses: sometimes their newsroom peers, and sometimes their culturally or politically passionate readers.

During the trial, Hogan/Bollea’s lawyers cited an internal staff memo of Gawker founder Nick Denton boasting of the 8 million page views of the tape of Bollea in bed with his best friend’s wife — over twice the site’s previous record — leading to a rare 20 percent bonus for Gawker staffers. Testimony also revealed that Gawker had used viral marketing to accelerate sharing of the video.

Defenders of management by metrics might object that Gawker was an extreme case, not only because of Denton’s devil-may-care style but also because this verdict was unusual in that it was bankrolled by a billionaire with apparently unlimited commitment to take the case through appeals.

Yet even The New York Times nearly became the victim of the (more decorous) pursuit of engagement. In June 2017, the editorial page editor of the Times, James Bennet, was putting the finishing touches on an editorial about the shooting of Republican congressman Steve Scalise at a Congressional baseball game. It seemed an excellent opportunity to show how Republicans, too, were exposed to gun violence.

Determined to complete editing in time for the next day’s print edition, Bennet changed the unsigned editorial’s language to suggest that the former vice-presidential candidate Sarah Palin had inspired the mass shooting in Arizona in which Rep. Gaby Giffords was wounded.

Bennet’s revised text stated incorrectly that Palin’s advertisements had drawn targets over pictures of opposing candidates, while the targets were actually superimposed on congressional district maps rather than photos of individuals. The digital form of the article was corrected almost immediately. But Sarah Palin (represented by some of Hulk Hogan’s lawyers) nonetheless sued both the Times, and Bennet, who took full responsibility in his testimony. The jury agreed that the error had been negligent rather than malicious, the standard in libel cases involving public figures.

Bennet had been hired back from The Atlantic partly because of his revival of that venerable magazine as a digital powerhouse. (For a few years I was one of the magazine’s bloggers and, briefly, a columnist.) The Washington Post reported that on his return Bennet had “a mandate to shake up the staid opinions section — to ‘move faster,’ one performance review urged, and ‘make changes that are more disruptive.’”

His employers should have been more careful what they wished for. Ironically, an editorial sensibly calling for dialing down extreme language (Scalise had been shot by a fanatical anti-Republican) seemed to be amplifying polarization.

In 2020, Bennet’s further pursuit of traffic-building controversy led him to publish an opinion piece by Tom Cotton, the Republican Senator from Arkansas, calling for military suppression of the violent urban disorders that had followed the death of George Floyd. The Times’s Op-Ed pieces often don’t reflect the views of the editors. But following complaints from Times’ staff members, an official Times editorial note regretted publishing the piece. Bennet resigned shortly thereafter.

The Hulk Hogan, Sarah Palin and Tom Cotton cases illustrate the pitfalls of the new information ecology. Metrics — whether dashboards or statistics of likes and retweets — have entered the lifeblood of journalism as people are energized by antipathy. Petre’s concern is the professional ethos of journalists dealing with management, but they have other bosses: sometimes their newsroom peers, and sometimes their culturally or politically passionate readers.

According to a recent Pew Research Center survey, two-thirds of journalists say social media has had a negative impact on American journalism, and over a quarter say a very negative impact. The paradox is that the more the impact on the public is measured by services like Chartbeat, the more trust in journalism has declined — from over 50 percent in the 1990s to little more than a third now, according to Gallup. In our new Inflammation Age, enragement is engagement.

Where does journalism go after Sara Palin and Peter Thiel are done with it? How long will the gamification of news endure? Caitlin Petre does not address these questions, but her field work and analysis are a fine jumping-off point.