Price-savvy travelers are aware how widely airfares vary within countries — not to mention country to country. Thanks to Kiwi.com, a Czech-based online travel start-up, we now have hard numbers on just how dramatic the differences can be.

Some of the variations are cost-driven: maintaining domestic air service on lightly traveled routes, especially in harsh climates, is very expensive. Some are no doubt driven by how well individual airlines make use of computer-facilitated “price discrimination,” going as high as they dare with deep-pocket business passengers and as low as they must to fill the other seats. And that (though we all grumble) strategy is a good thing, provided competition serves as a check on market power.

But it’s still a strain to explain why fares average twice as much in France (per 100 kilometers traveled) as in Portugal and four times as much in Egypt as in India. One plausible explanation: some governments actively encourage air travel by means of subsidies and friendly regulation in order to encourage tourism or to please their growing middle classes. Another, of course, is that, in much of the world, airline owners (often governments) exploit market power in order to generate excess profits or employment — or simply to allow incompetent management to bumble on. I’ve picked a bunch of countries of special interest, either because they are large markets or serious outliers. 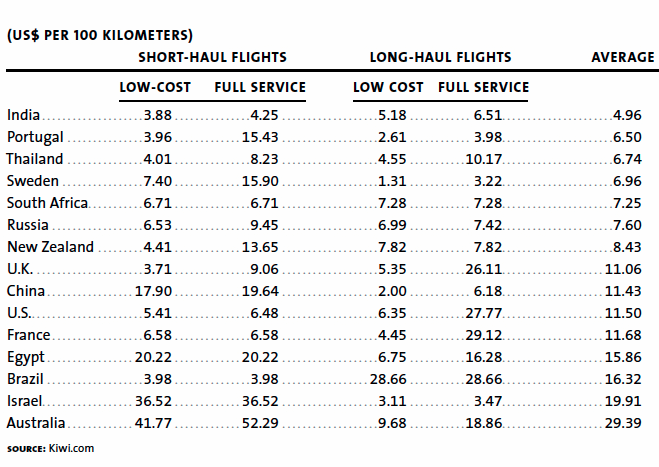