john komlosis professor emeritus of Economics and of Economic History at the University of Munich.

The fact that the unemployment rate has fallen to the lowest level in five decades (3.5 percent in October) has been widely heralded. What is not well known is that this rate, which is more or less the official rate (variation U3 published by the Bureau of Labor Statistics), is increasingly seen by economists as a problematic measure of labor market slack or societal well-being — especially since the recovery from the Great Recession.

There is an another, superior, yardstick. Since 1994 the BLS has regularly published an “alternative measure of labor underutilization,” informally called U6. This broader measure includes the underutilized part-time workers who would prefer to work full time, as well as individuals who are too discouraged to try to find work or who are only marginally attached to the labor market for a miscellany of other reasons.

To get a sense of how U6 alters our perspective on labor market slack, I calculated the gap between U3 and U6 — first for the labor force as a whole and then by ethnicity, gender, age and education. (The ethnic breakdown is not released by the BLS but is published by the Economic Policy Institute, a nonpartisan think tank in Washington.) The demographic breakdown shows striking (if not entirely unexpected) differences among the subgroups. But more on that later.

The average values of U6 and U3 for the entire labor force for the whole period under consideration (1990-2019) were 10.4 percent and 5.7 percent, respectively, with an average gap of 4.6 percentage points. Prior to the Great Recession, the difference between U6 and U3 was generally smaller. It started to climb when the recession began at the end of 2007, reaching 7.1 percentage points in March 2009. That means U6, the more reliable indicator of labor-market slack, was almost twice as high as the official unemployment rate, U3 (8.7 percent). 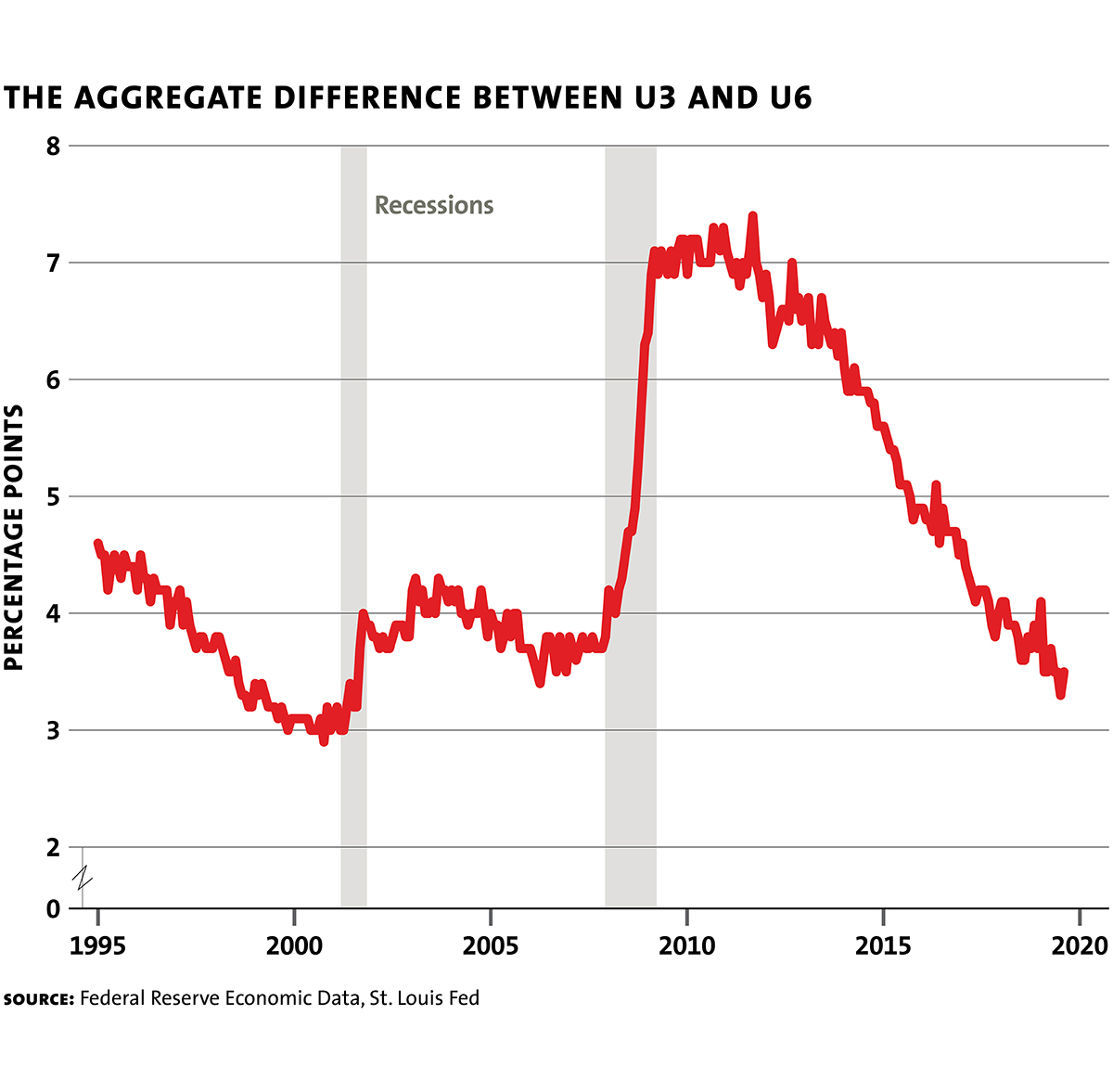 The widening of the U6-U3 gap was due mostly to the increase in part-time workers who would have preferred to work full time; they account for three-quarters of the gap. Involuntary part-time workers increased from 3.0 percent of the labor force at the outset of the Great Recession to 5.9 percent at the economy’s nadir in March 2009. All told, the U6-U3 gap increased from 3.7 percentage points of the labor force to 7.0 percentage points and stayed near that level until early 2012 when it started to edge down. However, it only breached the pre-crisis level of four percentage points at the end of 2017.

One would think that another component of U6 — discouraged workers who cease to look for jobs — would likewise swell dramatically during a recession because the effort of looking becomes more problematic. However, this is not to be found in the data. For instance, discouraged workers added just half a percentage point to the U6 rate by the end of the Great Recession.

The U6-U3 gap as a portion of U3 (that is, U6-U3 divided by U3) was fairly stable in the 80 percent range for decades before and during the Great Recession. But it overshot that benchmark by the summer of 2012, reaching 102 percent in October 2014 and remaining near that level for some time. In August 2019 it was still at the historically high level of 95 percent. This implies that the wide gap between the conventional (U3) and expanded (U6) measures seems to have become a chronic rather than cyclical phenomenon, signaling that involuntary part-time work is a problem that does not automatically go away in an economy with high demand for labor in many industries and many localities.

Parsing the Gap by Ethnicity

Adding to policymakers’ concerns, the U6-U3 gap has typically been two or more times larger for minorities than for whites. For example, in the 1990s the gap averaged 3.3 percentage points for whites compared to 6.9 percentage points for blacks and 7.2 percentage points for Hispanics. Thus, minorities faced double trouble, with both higher conventional unemployment than whites and far higher rates of underemployment. To be sure, the gaps narrowed in the period between the 2000-01 recession and the Great Recession. But widened again thereafter. The Hispanic gap reached and remained an astonishing 10 percentage points higher than the six-percentage-point gap for white workers from October 2009 through June 2013. 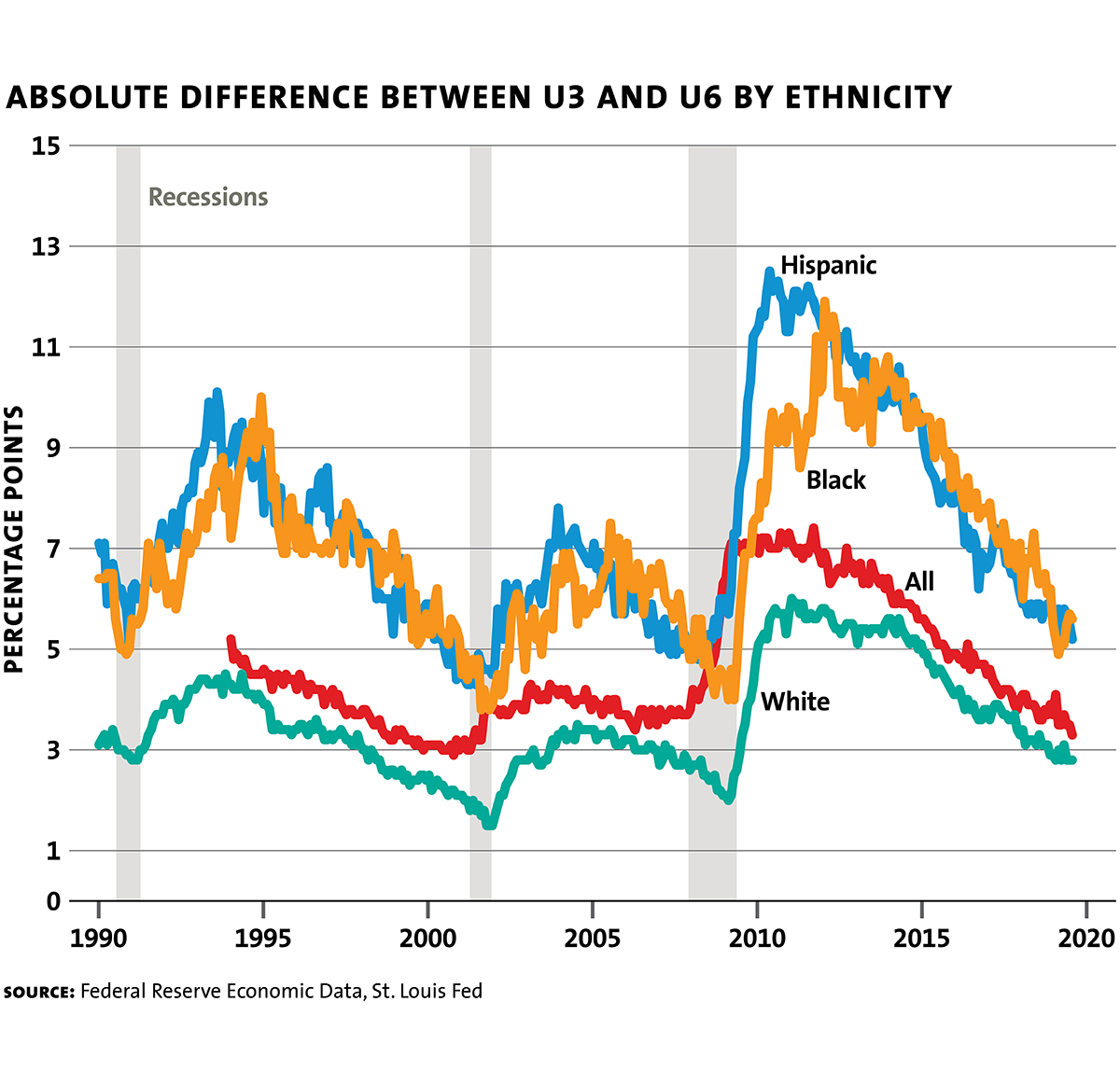 The U6-U3 Gap Relative to U3, Sliced and Diced 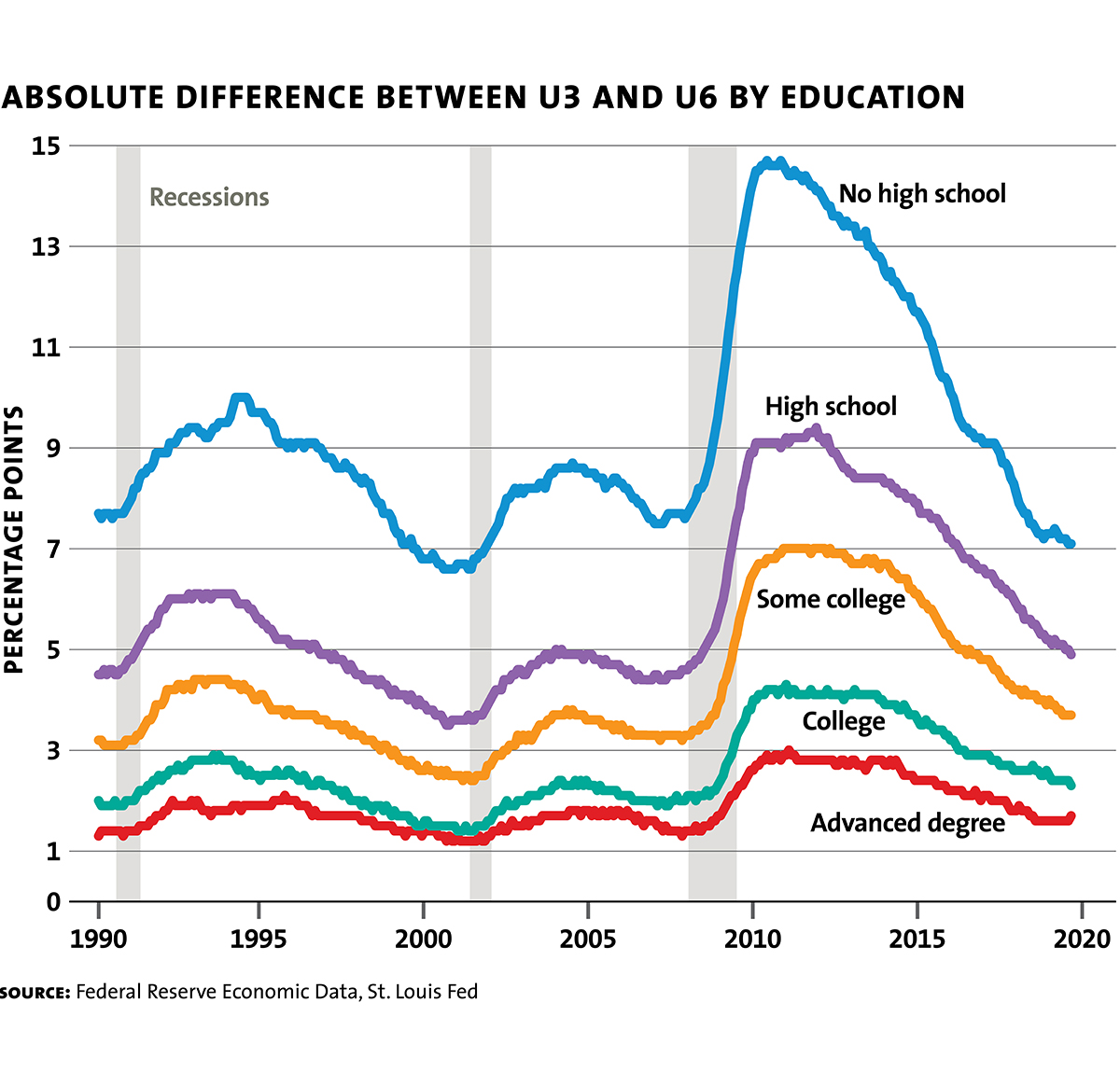 The U6-U3 gap varies radically with educational attainment, ranging from a mere 1.9 percentage points for those with post-college degrees to 9.4 percentage points for those not finishing high school. The gap for women as a group has generally been slightly larger than for men. But that changed during the Great Recession, when the gender figures almost converged. And, strikingly, the difference has remained small since the recession. When broken down by age rather than gender or ethnicity, young workers suffer the largest gaps by far. The youngest age group also experienced the largest uptick during the Great Recession: the gap for those aged 16-24 increased by 6.1 percentage points, while the gap of the other three age groups (24-54, 55-64, 65+) all increased by roughly half as much. 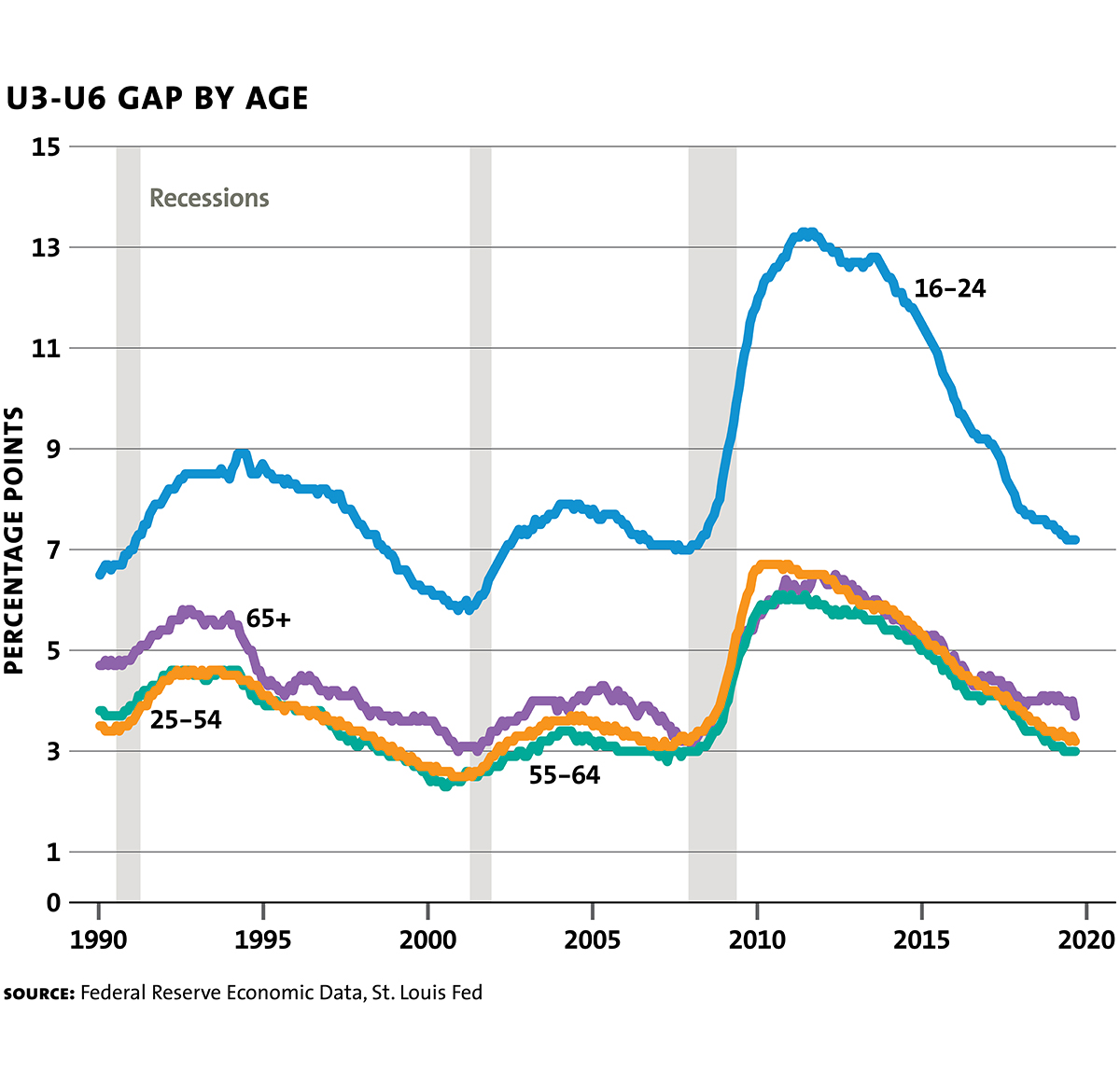 What to Make of It All

The fact that record-low conventionally measured unemployment hasn’t brought inflation with it is one of the puzzles of this post-recession era. U3, it seems pretty clear, no longer provides an adequate picture of labor force utilization — or, for that matter, the distress that employment volatility creates for households. Using U6 as a rough-and-ready measure probably offers clearer evidence of labor market slack, and perhaps of the welfare of Americans, especially when digging deeper by ethnicity, gender and age. But the gap between U6 and U3 for subgroups as well as for the labor force as a whole remains largely unexplored territory both in terms of business cycle dynamics and in terms of household adaptation to the breakdown of a labor market in which steady, full-time work with benefits for a single employer can no longer be assumed. All this suggests that conventional monetary policy is not sufficient to manage employment and that we will need to look elsewhere for tools that reduce household risk in today’s economy.