Medicare for All — What Then?

ed dolan is a senior fellow at the Niskanen Center think tank in Washington.

“Medicare for All” has become a mantra — well, a core campaign issue, anyway — for Democratic candidates this year. And they just might win with it as part of a focus on bread and butter issues rather than appeals to tribalism. But suppose the dog does catch the bus. Then, supporters will need to think about what Medicare for All actually means.

For many, it means something like Bernie Sanders’s plan, under which everyone would get first-dollar coverage for every kind of medical expense from a single government agency. For others, it means something much more modest, like adding a government option, modeled on Medicare, to the plans offered by Affordable Care Act exchanges. Here, I outline something in between: what I view as a practical and affordable version that is consistent with the goals of protecting everyone against the threat of ruinous medical expenses, assuring that everyone pays their fair share of the cost, and making health care far more efficient — and consumer-friendly.

What Can We Learn From Other Countries?

It’s tempting to think that all America needs to do is copy one of the single-payer insurance systems that already work in other rich democracies. After all, based on data from the Commonwealth Fund, U.S. health care performs less well, yet costs more, than the best systems in other high-income countries. 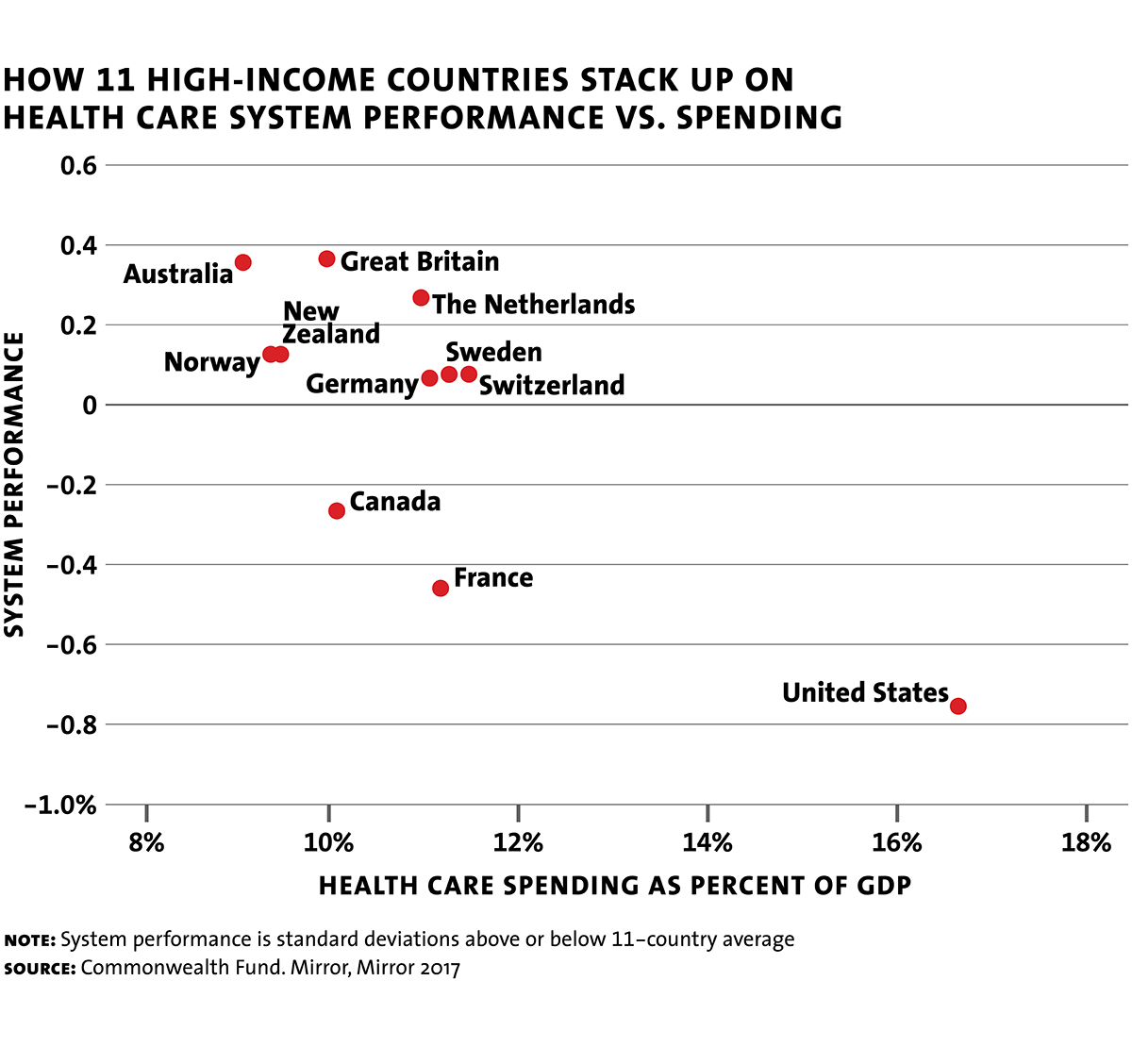 Now, I agree there is something that health care systems of all those other countries have in common, something that we can learn from. But it’s not the virtues of a rigid single-payer model, in which the government alone bargains with health care suppliers over what services will be provided and at what price. Even a superficial look at the three top-ranked countries in the Commonwealth study suggests they are less comprehensive, less centralized, and much more diverse than many suppose.

The British National Health Service (NHS) provides a wide range of services without charge, but its English, Scottish, Welsh, and Northern Irish branches operate with considerable autonomy. Most patients face copays for prescription drugs and dental care, although those are waived for people who cannot afford them. All told, the government pays 79 percent of health care expenses.

In Australia, the federal government provides much of the financing, but much additional funding and most of the actual administration comes from state and local governments. Out-of-pocket payments account for 18 percent of total health care spending, while government at all levels covers 68 percent. Nearly half of the population has supplemental private insurance.

The Netherlands covers about the same share of total health care costs as the UK. But rather than having a single national insurance fund, it relies on mandatory purchase of private health insurance. Tax-financed subsidies keep premiums low, but some medical services are subject to deductibles and copays. Insurance companies must accept all applicants regardless of health status and must cover a specified package of basic benefits. Most people buy supplemental insurance to cover both out-of-pocket costs and items not included in the basic package.

Other countries in the Commonwealth study use variants of these three models, but none has a true single-payer system. What they do have in common that earns them such high ratings is universal, affordable access to basic health care. That is the goal that we should focus on if we want America to join the club.

Start with the objective of having everyone pay their fair share. One approach is to use taxes to even the burden. For example, the Sanders version of Medicare for All calls for new taxes on employers, an income-based premium for individuals, and increased tax rates for high-income households.

That is conceptually workable, but it is not the only way. An alternative, known as universal catastrophic coverage (UCC), uses income-based deductibles to distribute the burden — the more you earn the higher you pay out of pocket before government insurance kicks in. No one ever has to forgo medical services because they can’t afford them, while those who can must pitch in.

Under a UCC version of Medicare for All, everyone would automatically get coverage similar to today’s Medicare or Medicare Advantage policy, with no premium and no copays. For families below the poverty level (about $25,000 for a family of four), the deductible of the policy would be set at zero. For others, it would be set as a percentage (say, 10 percent) of the amount by which household income exceeds the poverty threshold. For example, a middle-class family of four earning $75,000 might face a deductible of $5,000 (10 percent of the difference between $75,000 and $25,000). A similar family with an annual income of $1 million might have a deductible of $97,500. If, for one reason or another, the latter find that limited coverage inadequate, they’d have the option of buying supplemental insurance — presumably at market-based rates.

Careful cost analysis, based on the work of Jodi Liu at the RAND Corporation, shows that such a program could be fully funded using the sums the federal government already spends on health care through the ACA, Medicare and conventional Medicare, along with the “tax expenditures” that subsidize employer-sponsored insurance. No new taxes would be required at the federal level.

Which Way Is Better?

In principle, the tax formulas of a Sanders-type Medicare for All plan and the deductibles of a UCC version could be tweaked to produce exactly the same average burden on households at each level of income. In that sense, neither version is inherently more “progressive” than the other. But even so, there are two reasons to prefer the UCC approach.

One is that using deductibles rather than taxes to achieve a fair distribution of the economic burden would cut administrative costs — a major factor that drags down the U.S. system in international rankings. A plan like Sanders’s would collect billions of dollars in taxes from affluent Americans and then give a large part of the money back to them in the form of generous health care benefits. That would be a colossal waste of administrative effort.

The second point in favor of using deductibles to even the cost burden is the incentive impact. There’s convincing evidence showing that, when pricing is transparent and consumers can make informed choices among providers, they spend less.

Of course, even under a UCC version of Medicare for All, not everyone would be a careful shopper all the time. Some people might be too stressed or incapacitated by their health problems to shop around, and others might just decide it’s not worth the (often considerable) effort. However, much the same can be said about shopping in a supermarket. Even if comparison shoppers are a minority, they create competitive pressure to keep prices down and quality up.

Market incentives would work better still if they were backed by a full range of administrative cost-control measures based on the government’s bargaining power and ability to analyze value — another feature that the best health care systems of other countries have in common. That would be true as much for a UCC version of Medicare for All as for a pure single-payer version.

Looking Beyond the Campaign

During the campaign season, the very ambiguity of Medicare for All could play well for Democrats. If there is to be follow-through, though, someone will have to take a deep dive into the specifics. And deciding on a pure single-payer version would have more to do with ideology than the experience of other countries. A pragmatic approach would get us where we want and need to go — at a lower cost.