A review of Slowdown: The End of the Great Acceleration—and Why It’s Good for the Planet, the Economy and Our Lives

edward tenner, a research affiliate of the Smithsonian and Rutgers University, is currently a Visitor in the Program in Interdisciplinary Studies at the Institute for Advanced Study in Princeton, New Jersey. 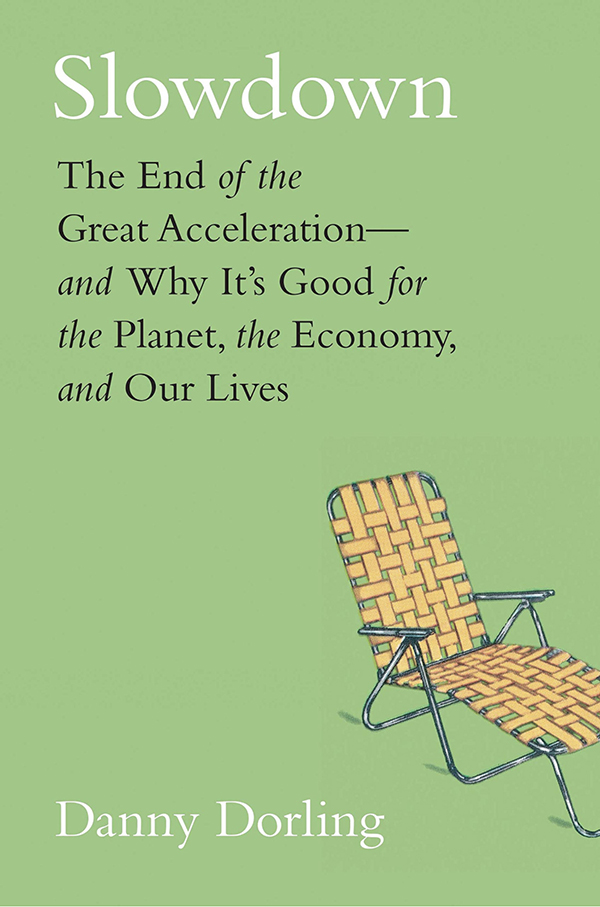 Slowdown: The End of the Great Acceleration—and Why It’s Good for the Planet, the Economy and Our Lives

The title of Oxford geographer Danny Dorling’s latest book, Slowdown, may seem unfortunate in a season of suffering, death and near-global lockdown. In fact, this is a most timely book, opinionated but brilliant — and not just because pandemics are one of the contingencies the author mentions (but with a twist, as noted below).

First, a word about Slowdown’s genre. It is part of a futurist tradition that could be called opto-pessimism, dating at least from the 1970s. In that era, marked by petroleum embargos and rampant inflation, doomsaying flourished. So did the counter-narrative that apparently intractable shortages due to population growth and resource limits would ultimately stimulate infinite human ingenuity.

The conflict’s most celebrated episode was the debate between the economist Julian Simon, author of The Ultimate Resource, who attacked the doomsaying biologist Paul Ehrlich’s earlier book, Population Bomb. Simon bet Ehrlich $1,000 that the price of a bundle of commodities (copper, chromium, nickel, tin and tungsten) would go down, not up. And Simon’s decisive win seemed to settle the argument. But, of course, it only opened new debates about selection of resources and baselines that continue today.

The opto-pessimists were thinkers who shared Ehrlich’s gloomy forecast but believed in the redemptive power of scarcity. Their motto could have been: “The end is near, and it’s the best thing that ever happened to us.” Unlike Aquarian utopians such as the Yale law professor Charles Reich who drew such admiration and scorn for The Greening of America (1971), they did not envision the decline of economic growth as the consequence of a new generation’s revolt against materialism. They foresaw a better society forged in the heat of a global economic meltdown, a secular version of the new heaven and new earth in the Book of Revelation.

The best known of the opto-pessimists’ books was The Promise of the Coming Dark Age, by the Northwestern University historian Leften Stavrianos. While his chapter headings promised that collapse would ultimately engender democratic technology, worker control, participatory democracy and self-actualization, he chose a debatable contemporary model: Mao Zedong’s Cultural Revolution, even quoting a Canadian foreign correspondent’s report that what Mao was really trying to do was “make a Christian out of every person.”

Dorling’s opto-pessimism is founded not on collapse but on slow growth, not on Maoist mobilization but on benign relaxation as represented by the beach chair on the cover of his book. Nearly all mainstream economists and policymakers of the 1970s believed progress required growth. They differed mainly in how the new increments of GDP should be distributed. For example, the Nobel economist Wassily Leontief once explained to me how simple the reduction of inequality could be in a high-growth society: progressive taxation could capture more of the annual surplus, helping the poor while allowing the rich to get richer, only more slowly.

Dorling is not the first social scientist to foresee a long-term deceleration; economists have been noting the declining rate of return on capital for years. The independent-libertarian economist Tyler Cowen painted a picture of rising inequality and declining opportunity for many workers in his Great Stagnation (2011) and in Average Is Over (2013). And the economic historian Robert J. Gordon, an important source for Dorling, saw an equally bleak picture in his massively documented The Rise and Fall of American Growth (2016).

The emerging order troubled Gordon more than it did Cowen, but neither expected technology to deliver the rapid improvements of the 19th and earlier-20th century despite anecdotal evidence like the much-celebrated Moore’s Law of exponentially rising processing power on microprocessors and the rise of ubiquitous mobile computing.

Dorling differs from both Cowen and Gordon in seeing slow growth as an unalloyed good, but that is not the only innovation of this book. Slowdown is truly unique is its application of informatics to history in the form of graphics illustrating trends in the rate of change.

The coronavirus pandemic has been teaching us this technique the hard way. In spring 2020 the world is paying attention not only to the rate of new infections and deaths, but also to how fast the rate is increasing or decreasing. Many people may still be dying, yet the increase or slowdown in the rates of deaths and new infections are the statistics people watch.

A conventional graphic of casualties may appear like a cross section through a mountain range — peaks and valleys on the horizontal. Dorling did not invent the unusual timeline charts in his book, but he uses them to powerful effect. At first, they look strange, like the wanderings of some insect on a sheet of paper. But considered carefully, they show how rapidly numbers were growing in some periods and shrinking in others.

For example, one of them illustrates the number of new books published in the Netherlands per million residents, decade by decade. It appears as a big question mark starting at 100 in 1580, rising to form an awkward-looking knot in the mid-20th century, then swinging right in an arc to reach a maximum rate of growth in the 1970s before reversing direction to reach an absolute peak (294 books per million residents) in 1995. The same numbers could be shown on a conventional x-y axis as a linear representation of a roller coaster or the mountain range silhouette. But the technique focuses our attention on the steepness of the peaks rather than their height, generally supporting the author’s points. 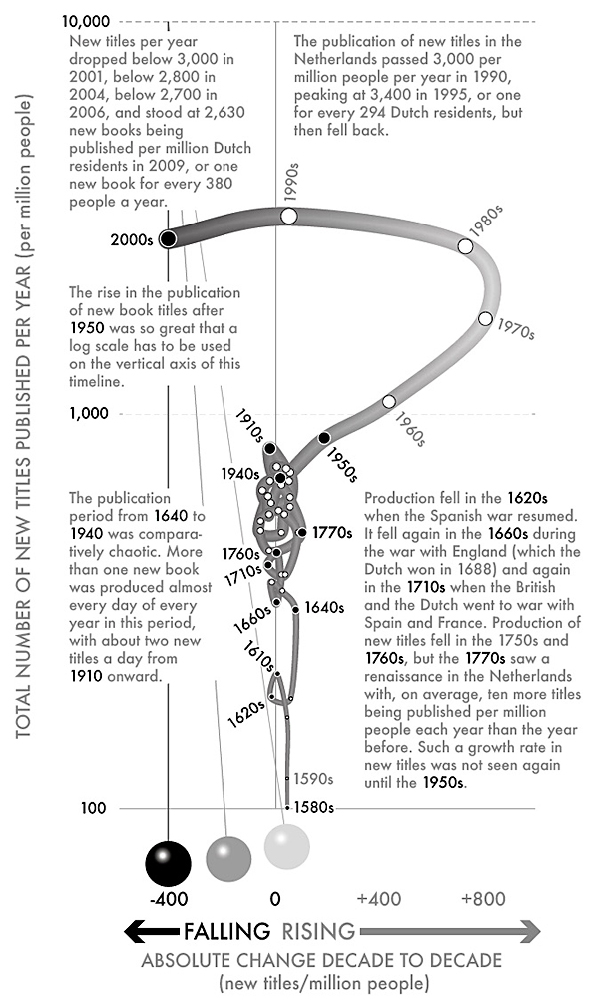 All these graphics are in the service of a positive vision of a future that seemed dark even before the pandemic: mounting public and private debt, environmental devastation from climate warming, global population growth. His message is that much of the vaunted growth of the 20th century came at the expense of the quality of life. To quantify this elusive concept, he makes use of an alternative to GDP called the Measure of Domestic Progress (MDP) that includes income inequality, housing affordability and opportunity to start a family as parameters. By the way, according to the MDP, the U.K. reached a peak of life quality in 1976 that it has never equaled since. (Thanks, Mrs. Thatcher.)

Using his wandering-bug charts to reveal changes in the rate of change, Dorling can show some surprising trends hidden in apparently gloomy statistics. Student debt may continue to increase, for instance, but the slowing rate of growth of debt suggests that we are approaching the peak. Likewise, Dorling, an enthusiastic British Labor Party supporter, differs from Marxist orthodoxy in discerning trends in inequality.

He argues that since 2008 the tendency to greater inequality in most countries has been flattening; even for the super-rich, he predicts “their time will come, and maybe soon.” The trend toward increasing education and political power for women will also lead to a slowdown in fertility and the rate of population expansion, pointing to long-term stabilization of human numbers — though he is not the only expert to predict peak population.

Of course, it is the consumption patterns of people in a handful of rich countries, especially the purchase of private automobiles, that have primarily driven the relentless growth of greenhouse gas emissions. But even here, Dorling sees the light at the end of the tunnel, a glimmer based on his conviction that new generations will turn against the consumerist lifestyle, even if they don’t blossom into Reichian hippies.

The result of this slowdown will not be a reversion to lower living standards, he argues, but a more humane world. He envisions a stable future “that may be a little boring, like Pittsburgh, Stockholm, Kyoto, Helsinki, Ottawa or Oslo,” not a utopia or a blissfully worry-free society, but a humane one. (It might have been even better to cite obscure places like Jacksonville, Oregon, and Lüneburg, Germany, former boom towns that have become livable destinations.) Taking a truly long view, Slowdown envisions a planet that may slowly turn from warming to cooling, aided by renewable and secure energy sources.

The Covid-19 pandemic does not invalidate this long-term vision. Dorling observes the resilience of society to even more harrowing events, like the two world wars and the 1918 influenza pandemic, and notes that fertility often increases during the rebound. Despite the well-publicized retreat of the wealthy from world capitals to their sumptuous second homes, pandemics also promote equality in the long run and “could shift the balance between rich and poor,” according to the classicist and economic historian Walter Scheidel.

Even in the 1970s, the conservative sociologist Robert Nisbet was writing of “the softening of power,” and Dorling notes that just about every movement from capitalism and imperialism to socialism has become milder than its original form — even fascism. Authoritarian regimes around the world are now notoriously exploiting the pandemic to increase their powers. Is this a periodic blip — as historical data cited by Dorling suggest — or a longer lasting trend? Will indirect shocks of economic lockdowns create chaos and new political pathology in poorer countries with inadequate medical facilities and dwindling exports?

The greatest uncertainty of all is the future of technological innovation that could conceivably revive high growth rates even as it curbs climate emissions. Juxtaposed against the pessimism of Cowen and Gordon is the counter-metaphor of another economist, Joel Mokyr of Northwestern. While the low-hanging fruit is gone, Mokyr suggests, we now have taller ladders — powerful new instruments and techniques for accelerating innovation.

Walter Isaacson has even speculated that the trauma of the pandemic will spur a life-transforming revolution in genetic engineering. If he and others are right, opto-pessimism will turn out to be the new optimism.