Railroads, Then and Now

A review of Travelers, Tracks and Tycoons: The Railroad in American Legend and Life 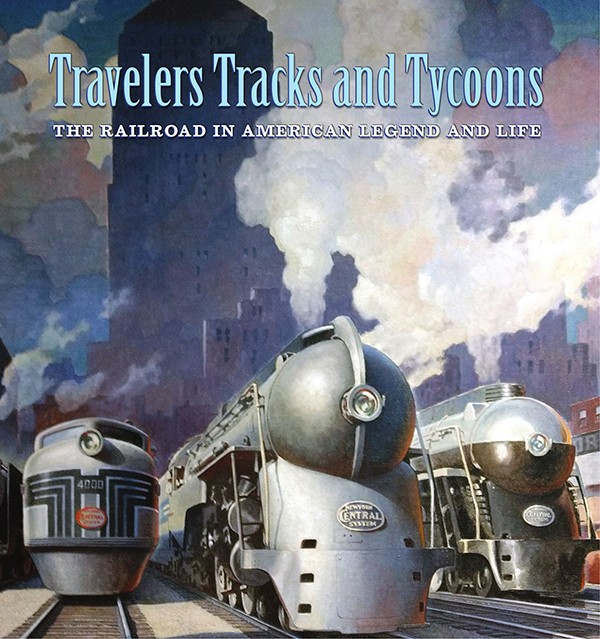 Travelers, Tracks and Tycoons:
The Railroad in American Legend and Life

In the summer of 2022, the Grolier Club of New York — the city’s bibliophile showplace — presented one of its most striking exhibitions: an assortment of memorabilia from 200 years of railroading, all from the collection of another venerable institution, the St. Louis Mercantile Library Association. The book commemorating the exhibition is simply gorgeous. More important, the narrative by the library’s curator, Nicholas Fry, is a reminder that, while usually out of sight and mind, railroads are still a critical part of the economy’s backbone.

Well, not always out of mind. As if to prove that railroads were still relevant, the threat of a nationwide strike by the Brotherhood of Locomotive Engineers and Trainmen (a 19th-century name if there ever was one) and other transportation unions put at risk an already ailing American economy. The railroads’ trade association warned that a strike would cost the nation $2 billion a day, severing already weakened supply chains and devastating markets for food, petroleum and automobiles. A reluctant White House and Congress intervened at the 11th hour, using a century-old law to impose a settlement.

As Fry writes, the Great Railroad Strike of 1877 that began in West Virginia was actually the first national strike of any American industry. And those who fret about a new civil war in America should read Fry’s account of a level of violence engendered that is hard to imagine in a modern democracy today. Union workers in Pittsburgh set fire to locomotives, rolling stock and buildings, trapping members of the Pennsylvania National Guard until the strike was put down by thousands of federal troops at the direction of President Rutherford B. Hayes.

A paradoxical portrait of the railroads in American life emerges from the exhibition and the book. Americans may have a soft spot for trains acquired from song and story, but are much less likely to be passengers than are citizens of other economically advanced countries. One common explanation of the difference cites the individualist American character. It might be more accurate, though, to turn the statement around: American individualism may in part be the result of how the country was shaped by railroads.

While European countries developed rail networks following the rights of way of existing roads and canals, the settlement of much of the United States was shaped by railroad construction and the commercial and political maneuvering around it. And not only in the West. The city now called Atlanta (and now home to the busiest airport in the world) was founded in 1837 as the terminus of the Western & Atlantic Railroad. By the time of the Civil War, it had become the transportation hub of the South and thus the starting point of General Sherman’s incendiary March to the Sea in 1864. The end of the Civil War gave President Lincoln (who had made much of his reputation as a railroad lawyer as a candidate), the political clout to build the long-debated transcontinental railroad from the Midwest rather than following the southern route that Jefferson Davis had promoted as Secretary of War in 1855.

The Iron Horse Goes to War

The havoc of new railroad-based military conflict (introduced in the Crimean War of the 1850s) ironically proved to be a crucible of ingenuity. Fry writes that “prefabrication, standardization of parts, and mass production and strategic stockpiling of materials allowed railroads to rapidly fix damage to the physical plant within hours or days rather than weeks or months.”

During the economic boom after the Civil War, American railroads reflected another sort of capitalist paradox. On the one hand, they were the paradigm of the new national corporation, as the business historian Alfred D. Chandler outlined in the 1970s. They introduced the model multi-divisional structure and (according to the labor historian Walter Licht in his book Working for the Railroad) the first elaborate employee rulebooks to ensure uniform operation over sometimes hundreds of miles of track. To late 19th-century populists, the railroads represented the stranglehold of monopolistic capitalism on the countryside and were among the early targets of antitrust legislation. On the other hand, the local railroad station and its workers were often beloved in their communities. The railroads, like today’s Silicon Valley tech institutions, were resented yet indispensable.

While the flanged wheel on the steel rail remains the most energy-efficient transport mode, the fate of passenger rail service demands a certain kind of political order — technocratic, far-sighted and powerful — that is suspect to most politically active Americans of all persuasions.

As Fry also observes, war could undermine railroads as it had once stimulated them. What the Civil War had done for trains, World War I achieved for automobiles and aircraft, helping them develop from curiosities to workhorses. New, more durable trucks soon were outdoing the literal workhorses and beginning to threaten the railroad freight business. Innovations like electrification and diesel engines in the interwar period, along with consolidation, automation and containerization in the post-World War II years, helped stem the tide — but could not save passenger service from nationalization almost everywhere.

You Can’t Get Here From There

We are left with Americans’ curious combination of sentimentality and indifference toward railroads, especially toward passenger service. As I have written elsewhere, the vibrant capitalism that created American railroad lines had a dangerous flaw. The goal of railroad companies was connecting major cities, transit hubs and ports. This meant that between Chicago and New York City and other major routes there could be several, more or less parallel lines.

The traveler with an itinerary served by more than one railroad might thus have to journey from one local station to another that was 50 or 100 miles away, or take a taxi across the city to another railroad’s depot and then wait for a connecting train. Even at the broadest extension of the U.S. railroad network around 1909, there was no direct line or convenient connection from Princeton to Flemington, New Jersey just 19 miles away, even though there were two competing interurban north-south trolley routes (fragments of which are still visible) plus the Pennsylvania Railroad from Princeton to Trenton.

When railroads tiptoed back into fashion with the environmental movement of the 1960s, most Americans had forgotten or never known the era in which the automobile seemed a utopian answer to the power of monopolistic railroads and urban landlords. Its impact on the latter was traced memorably in The Magnificent Ambersons, Orson Welles’s film based on Booth Tarkington’s novel. And as historians of transportation have pointed out, local service stations, auto dealers and road contractors could mobilize more votes than railroad moguls, despite the latter’s infamous lobbying clout.

While the flanged wheel on the steel rail remains the most energy-efficient transport mode, the fate of passenger rail service demands a certain kind of political order — technocratic, far-sighted and powerful — that is suspect to most politically active Americans of all persuasions. President Biden’s enthusiasm for Amtrak is an outlier.;

On the conservative side, a recent book with the hopeful title of The Romance of the Rails has the downer subtitle “Why the Passenger Trains We Love Are Not the Transportation We Need.” (Not surprisingly, it is published by the libertarian Cato Institute.) Yet progressive California’s high speed rail project, the most ambitious of its kind in the United States, is foundering and running seven-figure cost overruns as contractors, construction unions and landowners scramble for treasure. All the while, politicians along the planned inland route are lobbying for stops at local communities, which could cut most of the gains in intercity speed.

Dusty, Uncomfortable — and Still Around

While the story of multiple bankruptcies in the 1970s and rounds of consolidation that have left the United States with only seven big freight rail systems — two of them Canadian-controlled — seems depressing at times, it has a brighter side. Amtrak has somehow survived. And, under more competitive pressure since it was deregulated in 1980, freight service has become far more efficient. The number of railroad employees has fallen from an all-time high of 2,064,000 in 1920 to about 77,000 now, thanks to the elimination of lines and to automation, while ton-miles transported have grown four-fold.

The luxurious flagship passenger trains of our collective memory, which are celebrated in the exhibition and book, were always atypical. Even at the peak of railroad passenger service, it was more like today’s harried airline service. In the words of the gentleman chronicler Lucius Beebe, American passengers “rode to dusty destinies in regimented discomfort.” And many of the railroad jobs eliminated by technological change were unskilled, low paid and hazardous. This book is a worthy tribute to rail’s sometimes glorious, sometimes teeth-rattling journey.