Rivalries That Never Were

A review of The Generation Myth: Why When You’re Born Matters Less Than You Think 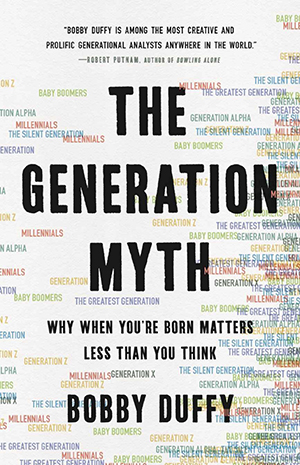 Why When You’re Born Matters Less Than You Think

The study of generations inhabits a twilight zone of social science. It was inspired by august thinkers writing in difficult times — the likes of Spanish philosopher José Ortega y Gasset (who grew up as part of the Generation of 1898, marked by their country’s defeat in the Spanish-American War) and the sociologist Karl Mannheim (who had to flee his native Hungary in the 1920s and then Germany in the 1930s). Today, the study of generations in the U.S. and UK is in the full throes of popularization — territory contested by marketers, journalists and a legion of consultants.

The competition for book buyers and business clients has favored the provocative, including Silicon Valley entrepreneur Bruce Cannon Gibney’s A Generation of Psychopaths: How the Baby Boomers Betrayed America, and Emory University literature professor Mark Bauerlein’s lament for the Millennials, The Dumbest Generation: How the Digital Age Stupefies Young Americans and Jeopardizes Our Future. There is usually an edge of invective or uncritical praise. Older Americans are either mildly stigmatized (as the Silent Generation) or canonized (as the Greatest Generation).

But it’s not all shock and awe out there. In 2009, Chronicle of Higher Education writer Eric Hoover debunked some of the gurus in a long report, “The Millennial Muddle.” And two years ago, the British sociologist Jennie Bristow rebutted the haters with her equally spirited book, Stop Mugging Grandma: The “Generation Wars” and Why Boomer Blaming Won’t Solve Anything. But if you want to read one disciplined effort to restore balance and common sense to generational thinking, Bobby Duffy’s Generation Myth should be it.

Duffy himself belongs to that under-the-radar cohort, Generation X, born between 1966 and 1979 during the baby bust that followed the fabled boom. As a professor at King’s College in the University of London he maintains just the right distance from America’s generation mania. Best of all, he has a rare gift for critical analysis of data, along with a light explanatory touch — especially impressive given the volume of data from dozens of cultures and hundreds of papers he has synthesized.

Why so much controversy over generations? Duffy deftly distinguishes between lifecycle effects, cohort effects and period effects. Before the 19th century, generations were defined by lifecycles and parent-child relationships. Sources since antiquity cataloged the phases of men’s and women’s lives and the attitudes and behavior conventionally associated with each. In the Bard’s As You Like It, “All the world’s a stage” proceeds from the infant and “whining schoolboy” to the pompous “justice” and the “second childishness” of the very old.

Cohort effects are differences among generations that persist throughout the life course. One dismaying example is suicide rates in the United Kingdom by birth year, from 1961 to 2017, illustrated by a remarkable graph in the book portraying such deaths as chains of mountain ranges. The British Generation X had a significantly higher rate than older and younger cohorts from youth into middle age. Reasons for this sad distinction are unclear, perhaps connected to the spread of opiate addiction in the generation’s youth.

Finally, period effects are external events that help shape the experience of multiple generations: economic booms and busts, wars, terrorism, technological and environmental changes and — we cannot forget — pandemics. These affect multiple generations, and sometimes divide age cohorts against themselves. Even within the same age bracket, responses to period effects may vary dramatically by ethnic and social background, as the American sociologist Glen Elder documented in his classic longitudinal study, “Children of the Great Depression.” Elder suggested that the postwar boom inherited by the Baby Boomers owed much to the resilience of the “deprived” youth of the 1930s.

Don’t expect The Generation Myth to efface the folklore of generational differences. But it can remind people of all birth cohorts of their shared interest in addressing urgent issues affecting pretty much everyone.

The globalization of the 1990s, a source of so much anxiety in our pandemic era, was another such period effect. It upset conventional economic models that predicted financial straits for the Boomers as members of an oversized “bulge” generation, a model made famous by the economist Richard Easterlin in his 1980 book Birth and Fortune. Citing the British politician David Willetts’ anti-Boomer polemic, The Pinch, Duffy observes that the globalization of the two decades following Easterlin’s book made American and European Boomers a relatively small cohort on the global scale. Willetts, by now a member of the House of Lords, is a Baby Boomer himself, like several other prominent critics of the cohort.

Duffy uses his aforementioned triple distinction (which he gives the formidable name “synthetic cohort analysis”) with surgical skill to dissect and refute myths of generational contrast and conflict, drawing on 50 years of studies. Are young people turning their backs on car culture, as many media accounts assert? According to recent studies, in both the United States and Ireland differences between Millennials and Gen Z on the one hand and Baby Boomers on the other disappear once statistics are adjusted for lifecycles and other factors.

There are differences in attitudes toward climate change, but age cohorts turn out to be more similar than different. As for the idea that Millennials and Gen Z are radically different in values and behavior than previous generations of workers, Duffy finds no evidence — despite the $20,000 hourly fees commanded by some consultants who claim to be able to make the distinction.

The Generation Myth will not necessarily triumph over entrenched conventional wisdom but should compel true believers to refine their methods and conclusions. Anti-Boomer writers will no doubt blame Duffy for not devoting more attention to intergenerational issues such as student debt. But he would probably reply that in the U.S., Baby Boomers also have unprecedented levels of student loan debt — mostly accumulated from programs designed to assist their children.

There is another reason to doubt that The Generation Myth, despite its formidable research base and sprightly style, will kill the old stereotypes. It is the rise, in the years since World War II, of a phenomenon that the philosopher of science Ian Hacking has called “looping.” Looping is the influence of a medical or social science category on identity and behavior. It might be called “self-confirming diagnosis” or “conceptual feedback.” An example: the psychologist Erik H. Erikson’s book Young Man Luther (1958) not only introduced the idea of the identity crisis but also inspired young people to believe they were having them.

Looping, in turn, is part of another effect that sociologists call the “Thomas Theorem,” first proposed by the sociologist couple William Isaac Thomas and Dorothy Swaine Thomas in the 1920s. As usually paraphrased, it states that something people believe to be true can thereby become true. We have all seen examples, most recently in the early weeks of Covid-19: rumors of shortages of everything from toilet paper to flour led to panic buying and actual shortages — just as frequent refueling during 1970s gasoline shortage scares created real shortages.

The loophole in The Generation Myth is the power of myths themselves. In the Middle Ages and Renaissance, men and women believed their birth dates influenced the balance of four “humors” in the bodies, each of which was associated with a different personality type. Renaissance artists born under Saturn were believed to have a melancholic temperament balanced between pathology and genius. And this self-conception contributed to some of the greatest art works of the era, like Albrecht Dürer’s engraving Melancolia I.

The phenomenon endures: some people who otherwise reject astrology on scientific grounds still identify with their birth signs and their supposed characteristics.

The creation of generational myths is a relatively recent phenomenon. The cohort of young American men who fought in World War I had no name until the haunting song “Remember My Forgotten Man” became the finale of Busby Berkeley’s film Gold Diggers of 1933. The carefree, affluent young people called sheikhs and flappers in the 1920s had shed their identity by then, merged into the shared suffering of the era. The Baby Boomers and later generations, by contrast, had a consciousness nurtured and reinforced not only by writing about them, but also by marketing designed to appeal to their alleged tastes. The same could be said about the so-called digital natives of the generations since 1990.

Today’s workers are ready to act out the myths of their imputed generations. In October 2021 The New York Times reported that “many employers said there’s a new boldness in the way Gen Z dictates taste… some members of Gen Z, defined as the 72 million people born between 1997 and 2012, or simply as anyone too young to remember Sept. 11, are quick to affirm this characterization.” And this article itself will no doubt embolden other Gen Z folk to act out their workplace insurgency, despite all the historical data cited by Mr. Duffy. If false beliefs affect behavior sufficiently, they can become true.

So don’t expect The Generation Myth to efface the folklore of generational differences. But it can do something more important: remind people of all birth cohorts of their shared interest in addressing urgent issues affecting pretty much everyone. To paraphrase a 1960s mantra of the Baby Boomers: suppose they gave a culture war and nobody came?