The Bottom Falls Out for the Bottom Class

ed dolan, the creator of Ed Dolan’s Econ Blog, is a senior fellow at the Niskanen Center, a think tank in Washington.

In a recent story for the Washington Post, economics correspon- dent Heather Long noted that despite a booming economy, millions of Americans still have trouble paying their bills. A link in her story led me to an intriguing graph published by the Federal Reserve. It shows that, as of the end of 2018, the bottom 50 percent of American households owned just 1.1 percent of all household wealth — down from 3.6 percent in 1990. That compared to 69.8 percent for the top 10 percent of households (up from 60.6 percent) and 30.9 percent for the top 1 percent alone (up from 23.3 percent). Wealth, as used here, means the total value of all assets owned, including real estate, financial securities, pension rights and consumer durables (think cars, boats, etc.), minus all liabilities, including mortgages and consumer debt.

The trend toward inequality is old news. But less attention has been paid to why the bottom has fallen out for the bottom half of American households — and why their wealth has not recovered, even 10 years into the longest economic recovery ever recorded. Here is what I found when I dug deeper into the data on which the graph is based.

A Story in Three Chapters

Begin by redrawing the graph to highlight the financial ups and downs of the lower half, which are barely distinguishable at the bottom of the Fed’s graph. When we focus on the bottom half, we can see that the story falls into three chapters that correspond to the three long economic expansions since 1990. 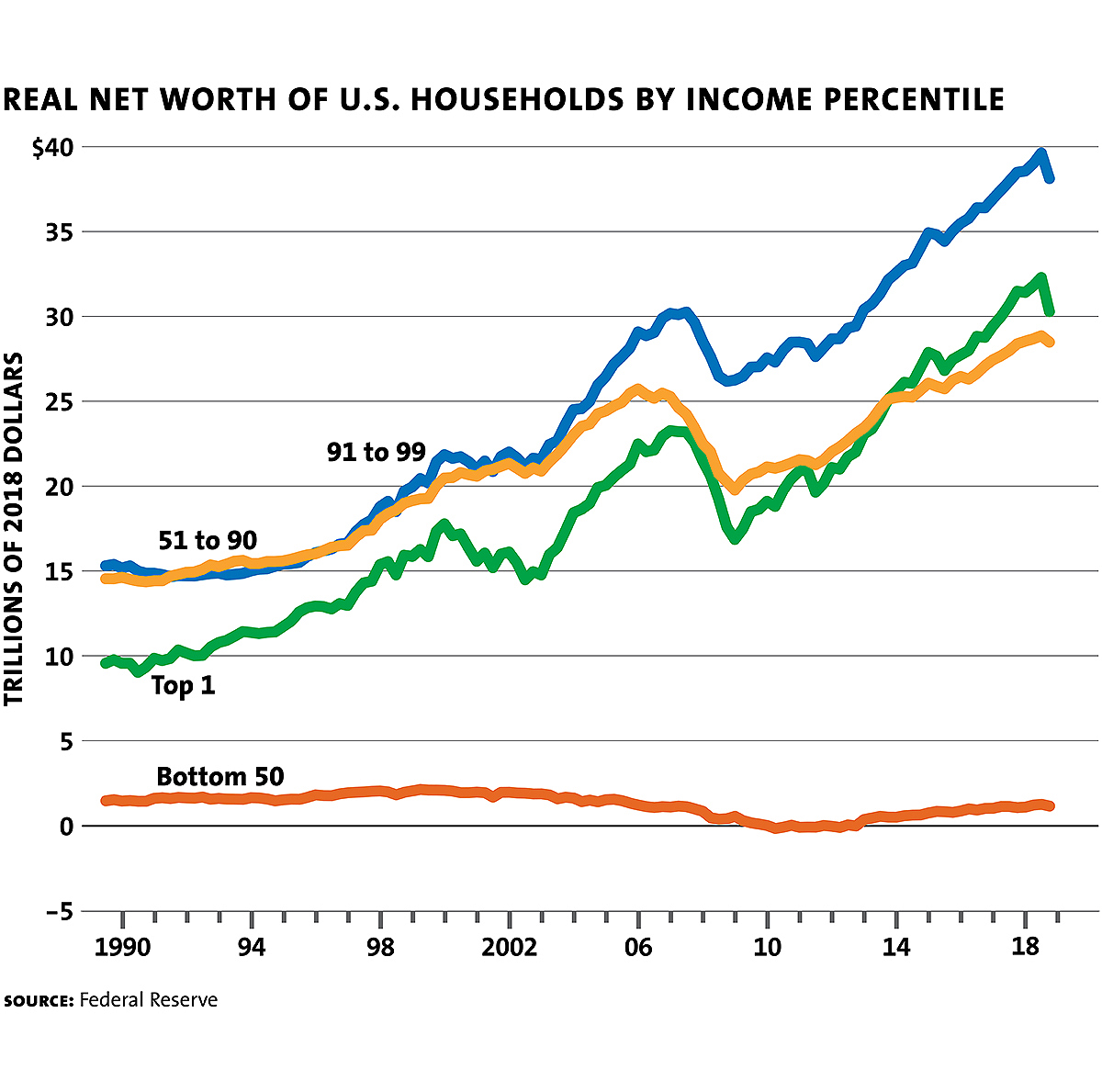 Chapter 1 takes place during the so-called dot-com boom of the Clinton years, when investors went searching for riches in the likes of Flooz and Pets.com. The official dates for this expansion are March 1991 to March 2001.

At the beginning of the period, the combined net worth of the bottom half of households was $1.5 trillion (in 2018 dollars). And despite a slow start, things began to pick up by the middle of the decade; from the end of 1994 to the end of 1999, the group’s net worth ballooned by 43 percent. 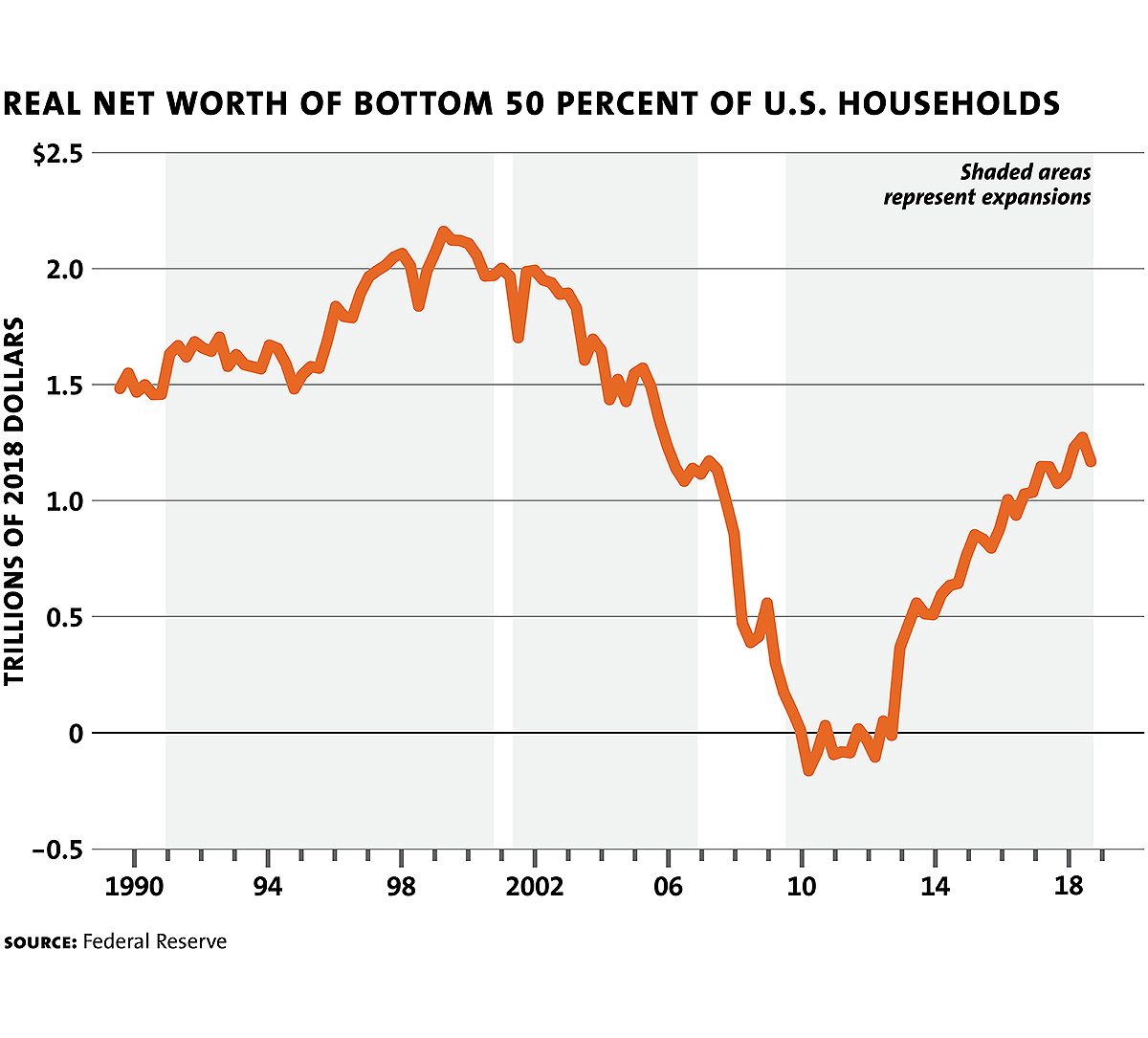 Chapter 2 begins with the short, shallow recession that commenced in March 2001 and continued through November. The surprise is not that net worth fell during this recession and in the run-up to it, but rather that the slide continued throughout the boom that took place in the early to middle years of the George W. Bush administration.

By the time that expansion ended in December 2007, the net worth of the bottom 50 percent had fallen to half of the peak it had reached at the beginning of the decade. The Great Recession, officially dated from December 2007 to June 2009, finished the job. By the spring of 2010, the debt of the lower half of households exceeded assets. That’s right, the collective net worth of some 154 million Americans fell below zero.

As was the case in the 1990s, their recovery in net worth got off to a slow start even as the economy grew. Indeed, our Chapter 3 — the return to positive net worth — did not really get under way until the first quarter of 2013.

From then, the financial condition of the bottom half improved steadily throughout the remainder of the Obama administration and continued to improve at only a slightly slower pace during the Trump presidency. Thus, 10 years into the current expansion, the real wealth of the lower half of households remains well below the level of 1990 — and that, in spite of a 30 percent increase in population.

This tale of three expansions sharpens our questions, but doesn’t provide answers. The fact that the bottom half gained in net worth during the 1990s is not surprising. The puzzles are why their worth fell during the post-millennium expansion, and why it has not yet fully recovered.

The answers lie in leverage, the term used in the financial world for the ratio of a company’s (or a household’s) debts to its assets. If your leverage is low — that is, if your debts are small relative to your assets — a small decrease in the value of assets or a small increase in debt doesn’t have much effect, in percentage terms, on your net worth. However, if your leverage is high, say, with debts nearly equal to assets, a relatively small decrease in the value of your assets or increase in your debt can wipe out your net worth altogether. 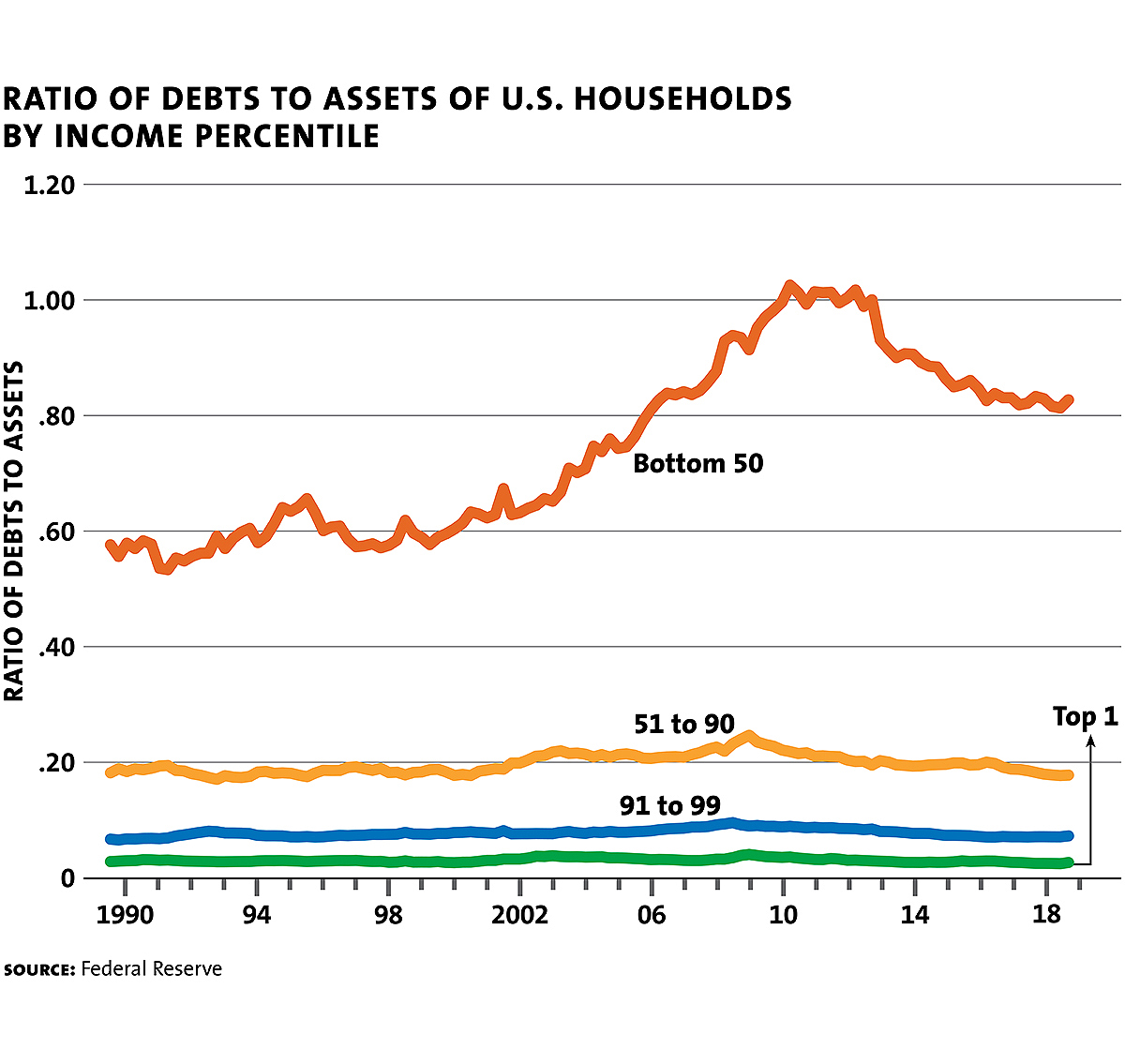 As the figure above shows, the bottom half of U.S. households are dramatically more leveraged than those with higher incomes. Yes, people in the top 1 percent and top 10 percent also have mortgages on their houses and sometimes borrow to acquire other assets, but their overall leverage is miniscule. Even among those in the 50th to 90th income percentiles, leverage averages only around 20 percent. The downs of the business cycle can be an annoyance for the top half, but not the disaster facing others.

Things are altogether different for the bottom half. Many in this group do own their homes. But those who do often have only a sliver of home equity. Their housing leverage, measured as the ratio of home mortgages to value of all real estate owned, typically falls in the 75 to 90 percent range, even in good times. For those in the next few deciles up, ratios of 40 to 50 percent are more typical. For the top 10 percent, mortgage debt averages just 10 to 25 percent of the value of real estate owned.

Yes, people in the top 1 percent and top 10 percent also have mortgages on their houses and sometimes borrow to acquire other assets, but their overall leverage is miniscule.

Of course, many people in the lower half of the income distribution do not own their homes. Their most important assets are cars and other consumer durables, while their most important liabilities are consumer credit in the form of credit card debt and auto loans. Among the bottom 50 percent, the ratio of consumer credit owed to the value of durable goods owned was around 90 percent in the early 1990s, but has risen since then to about 150 percent. That’s right: the bottom half owe more on their credit cards and auto loans than their durable goods are worth. For middle-income households in the next few deciles up, leverage of 50 percent is more typical. The truly wealthy pay cash for their new Beemers and Sub-Zero fridges.

Look more closely now at the line for the bottom 50 percent in the graph. We see that in Chapter 1 (the 1990s), leverage was steady and moderate. During Chapter 2, the housing boom of the mid-2000s, household leverage increased dramatically, peaking at over 100 percent as net worth turned negative during the Great Recession. Since that time (Chapter 3), leverage has decreased, but not nearly to the levels of the 1990s.

That still leaves important questions unanswered. Why did leverage behave differently during each of these three expansions? Why doesn’t a growing economy always raise the value of assets by as much or more than the value of debt for households in the bottom half of the income distribution?

The Underbelly of the Housing Cycle

Part of the answer lies in the changing composition of household leverage, especially in the components comprising home mortgages and consumer credit.

From 1990 to 2003, the value of the bottom half’s real estate holdings increased steadily, barely affected by the short recession of 2001. Mortgage debt also increased over the span, but it remained well below the value of real estate assets. In fact, after 1995 the gap between the two widened. By the beginning of 2003, the mortgage debt ratio for the bottom 50 percent of households had improved to a respectable 0.65. 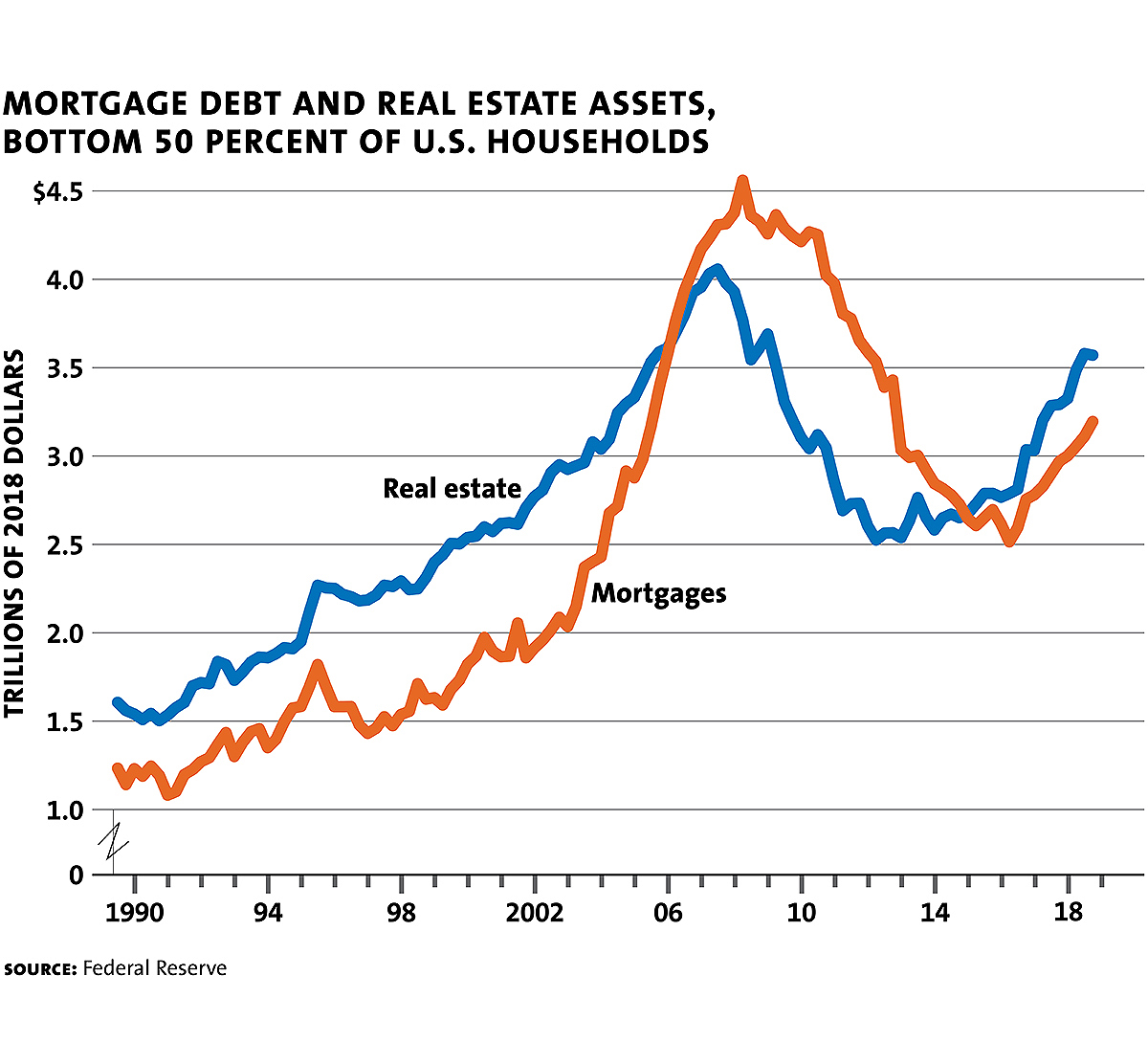 This period coincided with a boom in riskier lending. As banks and mortgage companies decreased required down payments and lowered credit standards for households with uncertain or unverified incomes, mortgage leverage increased rapidly. The role of “subprime” lending becomes clear when we compare the growth in mortgage debt for the lower half of households with that of households in the 50th to 90th percentiles. In the lower half, mortgage debt was 2.24 times higher in 2008 than in 2003. For the 50-90 percentile group, it increased by just 6 percent over the same period.

It took an agonizingly long time for the pain to subside. The value of the bottom half’s real estate holdings fell steadily from 2008 to 2013. Their housing debt was reduced through a combination of repayments and defaults, but almost five years elapsed before the mortgage leverage ratio began to fall. Finally, in 2015, rising home values brought the ratio below one. Since that time, the value of real estate assets and mortgage debt has more or less kept pace, with leverage ratios remaining around 0.8 or a little higher.

Unlike the housing boom of the early 2000s, the current expansion has been characterized by relative stability in mortgage lending. However, consumer credit other than mortgages has followed a more problematic course.

In the early 1990s, the value of consumer durables moderately exceeded outstanding consumer debt even among the lower half of households. From the mid-1990s on, credit grew more rapidly than durable assets. It did almost stabilize between 2001 and 2008 — and even declined a bit during the subprime mortgage lending boom. 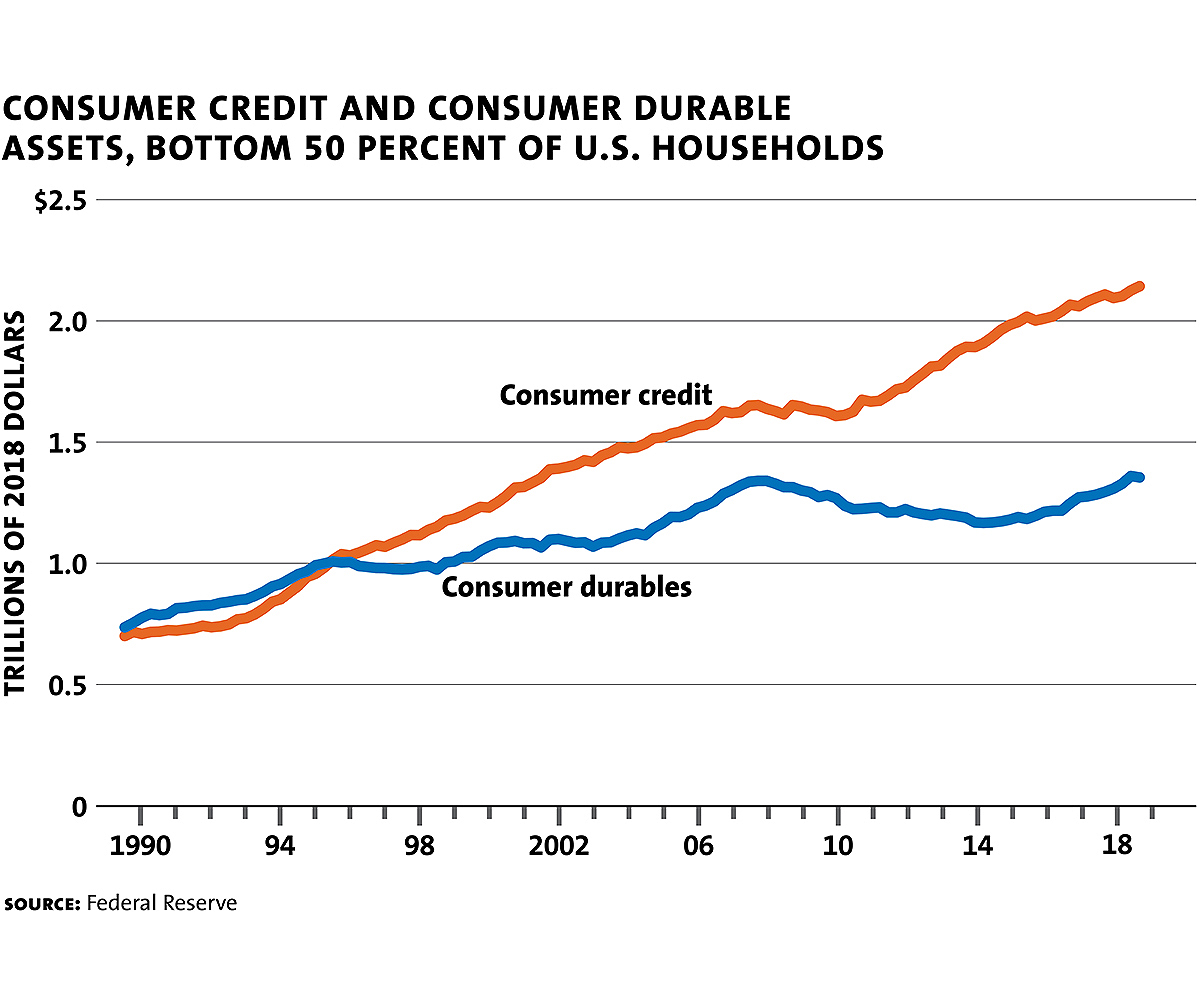 However, since the recovery from the Great Depression officially began in mid-2009, the consumer credit ratio has been growing. It stands at about 1.5 and shows little sign of narrowing anytime soon. For the bottom 50 percent of households as a whole, the heavy burden of consumer credit has substantially offset the benefit of recovering home prices, leaving the aggregate debt ratio for this segment of the population well above what was typical in the 1990s.

Pulling all of this information together, it becomes easier to understand why so many Americans feel they have been left behind by the past three economic expansions. Not only has the share of net worth of the bottom half fallen, so has its absolute dollar value. Stated in constant 2018 dollars, the total net worth of the bottom 50 percent of households is 20 percent less than it was in 1990.

Despite a return to positive net worth since 2012, the financial status of the bottom half of households remains fragile. Leverage, as measured by the ratio of total liabilities to total assets, has risen from 0.58 in 1990 to 0.83 at the end of 2018.

Sooner or later the economy will experience another recession. The precarious financial situation of the bottom half means that even a mild downturn that raises unemployment and reduces household asset values will threaten tens of millions of households with insolvency. By some metrics, the U.S. economy has never been stronger. But many at the bottom of the pyramid do not feel entirely secure — and for good reason.