The Cost of the Energy Transition Is More than Just Jobs

daniel raimi is a fellow at Resources for the Future (RFF), an independent nonprofit environmental research institution in Washington.

When assessing the costs of the transition to clean energy, policymakers and the media generally focus on one word: jobs. This is understandable and, to a large degree, appropriate. In America, work shapes identity, creates a shared sense of community — and, of course, supports families in a society with a limited safety net.

But another loss may prove be just as important in the energy transition: the loss of government revenue.

Putting the Pieces Together

In a working paper from RFF, I partnered with Emily Grubert, Jake Higdon, Gilbert Metcalf, Sophie Pesek and Devyani Singh to assess the impact of fossil fuels as a source of government revenue. We also estimated how those revenues might change over the next 30 years under different transition policy scenarios.

We found that between 2015 and 2019, fossil fuels generated, on average, about $138 billion per year to governments across the United States. The largest sources are petroleum product excise taxes, which have yielded $48 billion for states and $40 billion for the federal government annually. Oil and gas production (also known as upstream development) has generated about $34 billion annually. Of those upstream revenue sources, some $14 billion came from production on federal, tribal and state lands and waters, about $11 billion from state severance taxes and $6 billion from local property taxes. Other major sources of funds include oil and gas pipelines, oil refineries, coal production and power plants. 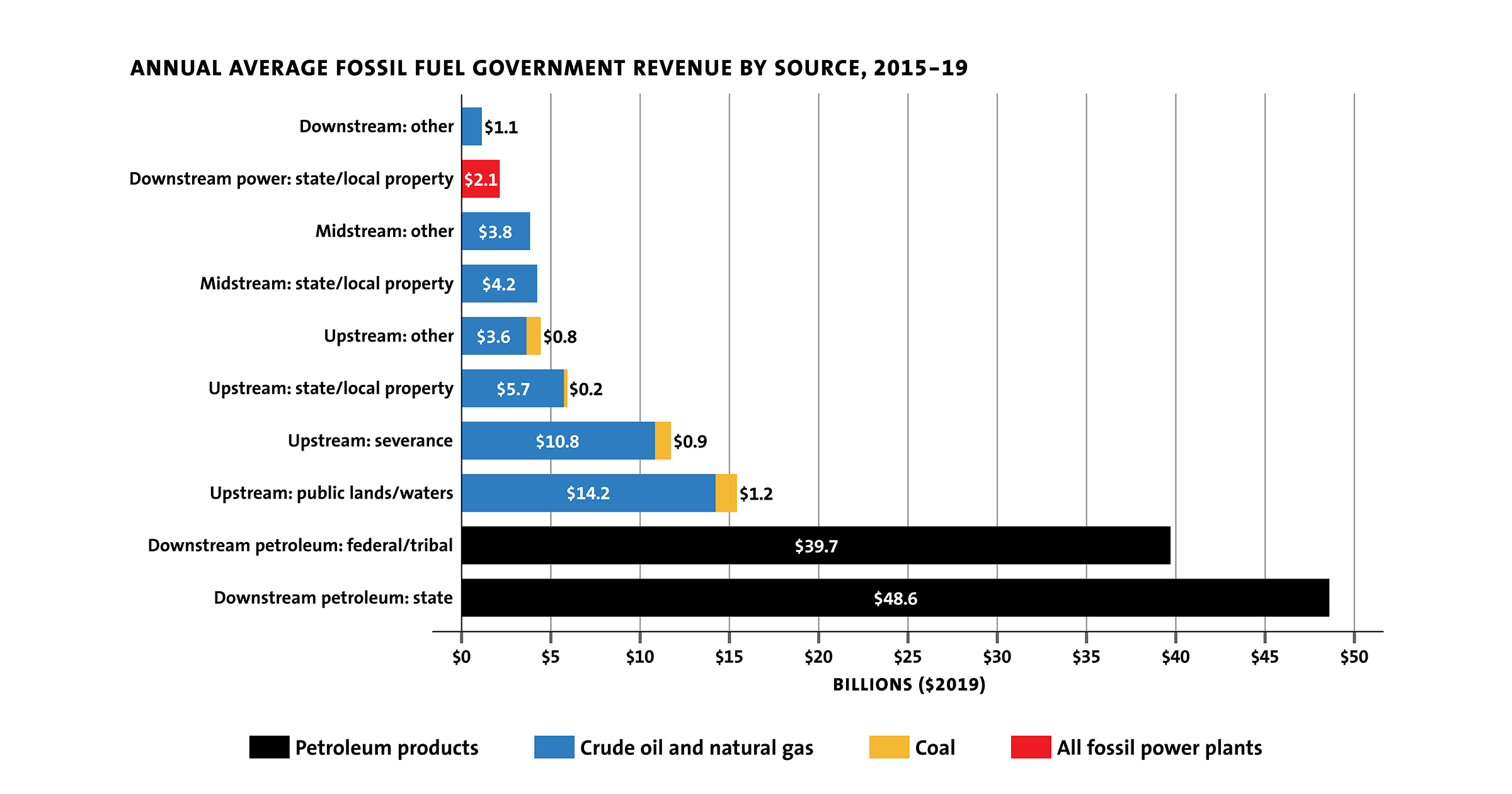 Now, let’s get one thing clear: $138 billion is a lot of money, but it is peanuts compared to the cost of delay in containing climate change. If we use the federal government’s interim estimate for the social cost of carbon emissions ($51 per metric ton), annual damages from energy-sector greenhouse gas emissions in the United States amount to roughly $261 billion per year. And that number is almost certainly an underestimate, as recent scholarship points to a social cost that is two or three times larger. Moreover, those higher estimates neglect non-climate damages that emissions from fossil fuels impose on human health and the natural environment.

Nonetheless, it’s important to recognize that the transition to clean energy will create fiscal pressures, particularly in rural areas where fossil fuels are an economic and fiscal linchpin. We estimate that fossil fuels account for more than 10 percent of all state and local government direct, own-source revenue in Wyoming (59 percent), North Dakota (31 percent), Alaska (21 percent) and New Mexico (15 percent). Five more states rely on fossil fuels for more than 5 percent: West Virginia (9.4 percent), Montana (7.9 percent), Oklahoma (7.7 percent), Louisiana (7.2 percent) and Texas (7.0 percent). Consider, too, that in some other states fossil fuels don’t provide a large share of state revenue, but they play an outsized role in certain localities — among them are Kern County, California; Weld County, Colorado and Uintah County, Utah.

Even in a scenario with no new initiatives to slow climate change, we estimate that fossil fuel revenue will be $22 billion lower in 2050 than it was in 2020, mostly due to declines in gasoline and diesel consumption as the U.S. vehicle fleet becomes more fuel-efficient and electrified. Unsurprisingly, more ambitious climate scenarios lead to more dramatic declines, with annual revenue in 2050 falling by $78 billion in a scenario that limits the global temperature rise in 2100 to 2°C, and dropping by $111 billion in a 1.5°C scenario. 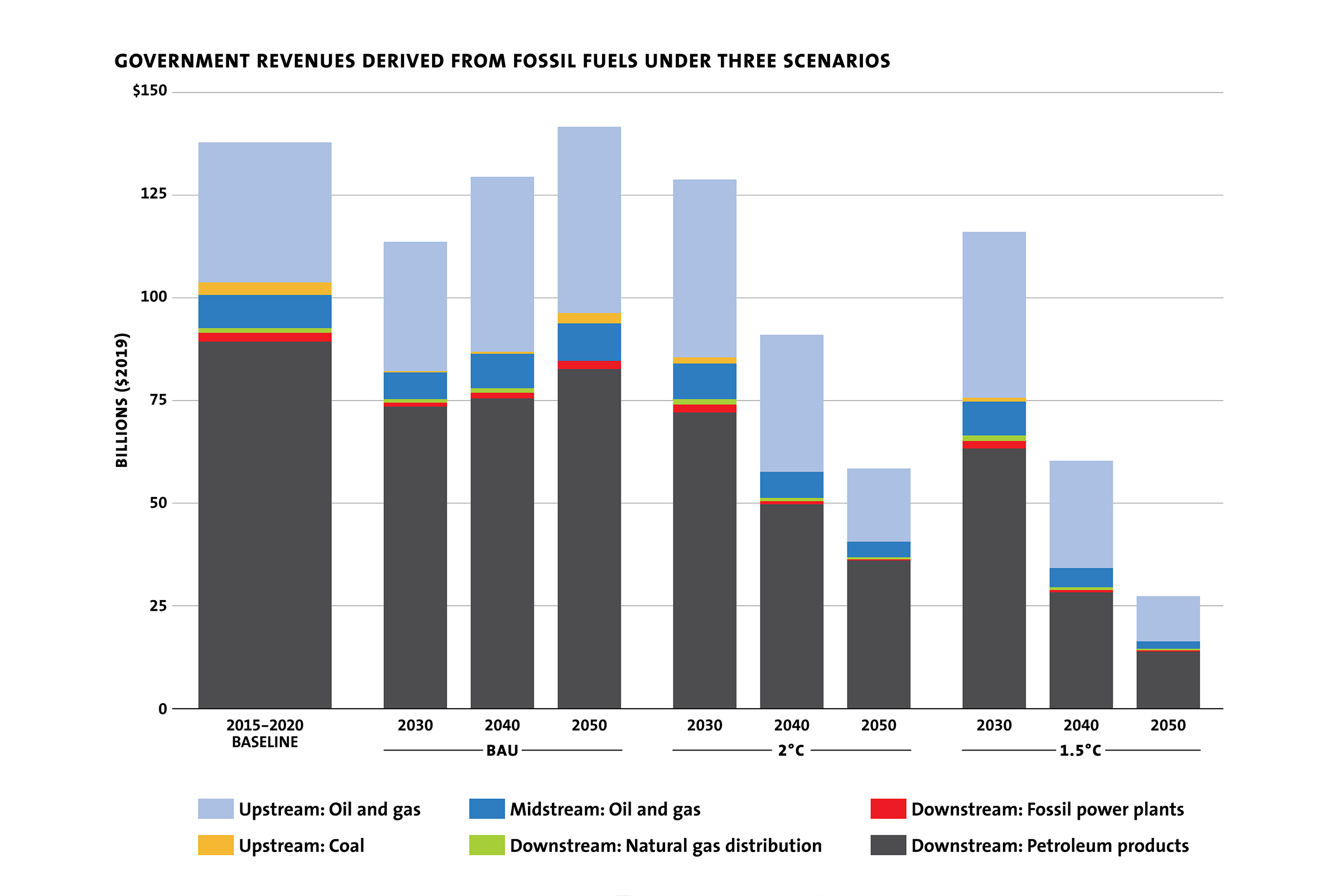 NOTE: Scenarios are based on BP’s 2020 Energy Outlook. “BAU” means business as usual. “2°C” and “1.5°C” indicate scenarios that are consistent with limiting temperature rise to international targets of 2°C or 1.5°C above preindustrial levels by 2100.
SOURCE: Raimi et al. (2021)

One clear result: government revenues from coal decline rapidly under all scenarios and approach zero by 2040 under both the 2°C and 1.5°C scenarios. These projected revenue losses will compound decades of coal-sector decline in Appalachia and exacerbate recent challenges for western coal states, primarily in Wyoming. Coal-dependent communities are on the front line of the energy transition and, as a matter of policy and politics, will need support to diversify their economies and revenue streams.

The implications for oil and gas are more nuanced and vary across scenarios. Oil and gas production remains relatively strong over the next 20 to 30 years under the business-as-usual and 2°C scenarios, but declines more quickly under the 1.5°C scenario. Oil and gas communities will thus have more time to use natural resource revenues to diversify their economies, build up permanent funds that can buffer the transition to other revenue sources, and plan for a clean energy future. Still, the long-term challenge of economic diversification, particularly in rural, resource-dependent regions, suggests that these planning efforts should start now.

How, then, to replace declining revenues?

First, the good news: we have the policy tools to replace these revenues. As my RFF colleague Marc Hafstead has shown, imposing even a modest federal carbon price (in the form of a carbon tax or auctioned emissions allowances) could raise hundreds of billions of dollars per year. Diverting a small fraction of this potential revenue certainly could make a dent.

By the same token, declining gasoline and diesel excise taxes could be fairly seamlessly replaced by fees tied to vehicle type and miles traveled, which could be calibrated to address multiple external costs including traffic congestion, accidents and road damage, as well as carbon dioxide emissions. Meanwhile, eliminating current subsidies for coal, oil and natural gas producers (in the form of tax breaks) and increasing royalty rates for production on public lands could contribute a few billion dollars per year — as well as increase the relative competitiveness of renewable energy.

Taxes on clean energy production could, in theory, help replace revenue lost from declines in fossil fuels, too. But this would clash with the thrust of policies that currently promote the transition to renewables through state standards and federal tax breaks.

But there’s no particular reason to limit the scope of new revenue sources to just the energy sector. And there are plenty of plausible ways to raise revenue at the relevant scale with minimal impact on economic efficiency and substantial benefits for a more equitable income distribution. Among them, a value-added tax and higher marginal income tax rates.

The catch, of course, is that the political prospects for all of these taxes are poor even on a good day. Although several of these options have been proposed in Congress recently — most notably, in the Build Back Better Act — none have managed to reach the 50-vote threshold in a closely divided Senate.

So, where does this leave us? We can distill this whole discussion down to some pretty clear takeaways. In fact, they’re so straightforward that I made a TikTok video to sum up the results.

But if you’re not into internet phenomena, here’s the upshot. The energy transition will have a major impact on tax, royalty and fee collections in rural, fossil fuel-producing states and communities — places, incidentally, that are massively overrepresented in the U.S. Senate. And the likely dislocation in government services is coming on top of job losses rippling through communities that often lack other industries to buffer the drop.

From a national perspective, the cost of offsetting these fiscal challenges would be modest, especially when we consider the benefits that emissions reductions would provide to our economy, our environment and our health. But the political and institutional barriers that are blocking a smooth transition are formidable. Getting from here to there will be a true test of our society’s maturity and resilience in the face of inevitable change.