The Hydrogen Car as Underdog

larry fisher writes about business for The New York Times and other publications. This is a follow-up to his article on hydrogen-fueled cars in the Third Quarter 2015 issue of the Review.

When the first production cars powered by hydrogen fuel cells debuted, they were accompanied by the predictable adjectives: green, quiet, cutting-edge. Now that they’ve been on the market a bit over a year, there’s a less salutary descriptor: deeply discounted.

You can lease a Toyota Mirai for $349 a month for 36 months with $2,499 down, which includes 12,000 miles a year and all the fuel you need. That’s pretty cheap for a car that stickers at $57,500. The Honda Clarity, a similar, hydrogen-powered compact sedan that just launched in December, is $369 a month with $2,868 due at signing and includes the fuel, too. Hyundai alone has kept lease prices up: the fuel cell version of its Tucson compact SUV leases for $499 a month and $2,999 at signing — again, with free fuel. For the time being, all three are available only in California, where the automakers have the infrastructure to provide service and hydrogen fill-ups.

To state the obvious, automakers normally don’t offer discounted leases on new models. A new Audi A6 with the list price of a Mirai leases for over $600 a month with $6,000 down. So Toyota’s and Honda’s pricing of their hydrogen fuel cell cars suggest that customers aren't lining up at the showroom doors.

“The entire alternative fuel category — electric, fuel cell vehicles, hybrids — had a dismal year,” explains Michelle Krebs, director of automotive relations at autotrader.com. They were the most heavily discounted category out there. Fuel economy just doesn’t matter to anybody. Throw in that we have a Trump administration now, and all bets are off.”

One issue with the first hydrogen cars is their appearance, particularly with the Mirai. Car and Driver magazine was unsparing: “Yes, it’s ugly — spectacularly ugly. There is no single angle from which it looks anything but ugly.”

As the magazine notes, this is not an accident but a page from Toyota’s past playbook, “To advertise the fact that the Prius was not like anything else, Toyota made it look unlike anything else. Time will tell if Toyota can do the same trick with the ghastly Mirai, but the automaker is banking big on the car and even bigger on hydrogen technology and infrastructure.”

The Honda Clarity won’t win any beauty contests either, while the Hyundai fuel cell Tucson looks just like the regular Tucson — which is to say, a generic small SUV. Maybe that’s by design, too. “What I get from everybody who drives this is “wow,” there’s nothing to this,” says Derek Joyce, a spokesman for Hyundai, which at last public count has a scant 130 fuel cell cars on the road. “It requires zero training; you could give the keys to anybody.”

When there’s nothing special about a vehicle, discounting does help move cars. But “move” is a relative term here. As of the last day of 2016, 1,106 Mirai had been leased or sold in California — which is more than Hyundai managed. But compare that number to the 12,700 Tesla Model S electric sedans sold or leased in its first full year, even while though the company was barred from marketing directly to consumers in the many states that bowed to pressure from the franchise auto dealer lobbies.

Of course, the Model S is beautiful, luxurious, and really, really fast; as a bonus it allows owner to advertise their green credentials. But being powered by an alternative fuel turns out not to be enough anymore, which is one reason why the Nissan Leaf is available for a bargain price and the Model S isn’t.

“Discounting is reflective of their existing business model, which doesn’t show that they are pioneering a new space," explains Michael Jager, head of Solidarity of Unbridled Labour (no misprint), a brand design consultancy in Burlington, Vermont. “It’s just in their DNA at this point — drop the price, get it out there — and not reframing the relationship to mobility. Couponing is a disastrous idea for brands.”

Hydrogen fuel cell electric vehicles, or FCEVs, do offer some real advantages over battery-powered electric cars, or BEVs. All three now available have ranges of 250 miles or more, which only Tesla currently matches on the battery side. And refueling takes just three to five minutes, compared with at least half an hour for quick battery charge on a special high-voltage charger. On the negative side, there are still relatively few hydrogen filling stations — though it is now possible to drive the 500-plus miles from San Diego to Lake Tahoe. (The companies promise that more stations are coming on line.)

Yet, despite some carping from advocates of the electric car (which have a large and growing advantage in numbers now), there is good reason to believe that FCEVs and BEVs should be able to coexist as part of a renewables portfolio. As noted in Reinventing the Automobile (MIT Press, 2010), “As battery and fuel cell technologies advance, it becomes clearer that each technology is important to the success of the other,” making it less of a leap to opt for an alternative fuel vehicle.

In the years since Reinventing… was published, the technologies have advanced to the point where hydrogen and electric vehicles have become viable daily transportation. Perhaps now to bring them into the mainstream, the innovation needs to happen on the business-model side. Note, too, that autonomous vehicle control is advancing even more rapidly than alternative fuel vehicles, with self-driving cars being shown by companies ranging from Google to Volvo. Coupled with a new generation of urban drivers apparently less interested in owning cars than tapping a smartphone app to summon Lyft, these changes create an opening for a truly disruptive model. 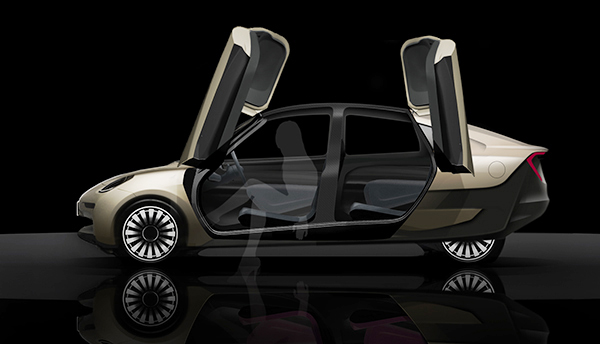 That’s the premise behind Riversimple, a UK startup created by a group of ex-motorsports and aerospace engineers. Riversimple’s hydrogen fuel cell car, a prototype of which is currently weaving through London traffic and gliding down the country lanes of Powys County in Wales, is small (two passengers), light and uses less than a third the fuel consumed by the Mirai. It's based on off-the-shelf technology, has the disarming I’m-cute-enough-to-hug character that made the Miata and the Mini instant hits, and offers something else missing from the big players' entries: fun.

“I realized very quickly that the breakthrough in making a practical fuel cell car isn’t better fuel cells, it’s through building a completely different sort of car,” says Hugo Spowers, Riversimple’s founder and chief engineer. “We’re not pushing the technology beyond what’s available today. What’s different is the system integration. And the great thing about that is you can do it with a small team, quickly and very cheaply. You can’t do that in a mature industry. You can’t just completely throw the baby out with the bathwater.”

Like a lot of startup founders, Spowers cites The Innovator's Dilemma, Clayton Christensen’s business classic about how truly disruptive technologies come from small companies with no stake in legacy products. Big companies focused on serving their best customers dismiss the new entrant as inadequate, only to watch it improve, grow and eventually take over.

“A number of things make fuel-cell cars an absolutely classic disruptive technology,” says Spowers. “Business models are forged by the environment in which businesses operate. In the conditions of the 21st century, energy resources and climate change are becoming dominant drivers where they weren’t on the radar in the 20th. It’s much easier to design a business model for that world than to tweak an existing one that was designed for something else.”

Riversimple hopes to have production cars available in 2019, but they won’t be for sale or lease. Instead the company will offer a service contract, similar to the mobile phone contracts that dominate the telecom industry. Customers will pay a monthly fee based on mileage that will include fuel, insurance and all maintenance — even replacement tires. The car will stay on Riversimple’s books until its end of life, when the materials will be recycled.

If that sounds good and you want to get on board early, Riversimple is crowdfunding. For £50 you can buy five shares and gain advanced access to the waiting list for a production car. “We want to succeed in the market because people like the car and want it, not because of eco guilt,” Spowers says. “It’s got to look good, it’s got to be fun to drive, with no cost premium over a conventional car. We’ve got folks here from Lotus and Cooper: we’re not going to make a boring car.”