The Puzzle of the Nairu

For a year now, everyone who pays attention to this sort of thing has been debating whether the Federal Reserve will tighten monetary policy at the next meeting of its rate-setting Federal Open Market Committee (FOMC). It last raised its federal funds rate target (the rate banks charge each other for overnight loans) by a quarter of a percent in December, 2015. At the time, the committee cautioned that rate increases would be “only gradual.” Still, few people thought that would mean waiting a full year for the next quarter point.

Donald Trump’s victory adds even more uncertainty to the prospects for Fed action. His views on interest rate policy varied during the campaign, although they seemed more strongly to favor higher rates as the election approached. But as president, he will have limited direct influence over monetary policy, and he will not have an opportunity to replace Fed Chair Janet Yellen until 2018, unless she decides to resign sooner.

In reality, any decision to raise rates in coming months will depend less on politics than on what may be the wonkiest number in all of economics — the Nairu. Nairu stands for Non-Accelerating Inflation Rate of Unemployment — such a mouthful that no one ever says it out loud.

At the risk of losing more readers, let me add one other point of nomenclature: In the 1960s, Milton Friedman called it the natural rate of unemployment. Today, some economists treat “Nairu” and “natural rate” as synonyms, while others say that Nairu is the short-term value of the natural rate over a period of a year or less.

The basic idea behind the Nairu is simple. It is widely accepted that as the economy moves through the business cycle from recession to expansion to overheating, shortages develop in labor and product markets that put upward pressure on prices and wages. The Nairu is supposed to capture the sweet spot – the lowest level to which the unemployment rate can safely fall before inflation starts to accelerate.

Why the focus on the Nairu? It is a natural fit with the Fed’s statutory goals for monetary policy. Under its so-called dual mandate, the Fed is supposed to aim for “maximum employment and stable prices.” And it seems reasonable to think of the Nairu as a benchmark for “maximum employment,” while “stable prices” is another way of saying a rate of inflation that is not only moderate but is not accelerating (or decelerating) from month to month.

That, anyway, is what Fed officials have taken the dual mandate to mean. But in order to implement it, the Fed still needs to fill in the numbers.

In recent years, it has maintained an inflation target of 2 percent per year, as measured by the government’s personal consumption expenditure (PCE) index as the stand-in for “stable prices.” (Justifying 2 percent, as opposed to, say, 3 percent or even zero, is another story best left for another post.) Putting a number on the Nairu, however, has posed more of a challenge.

Back in the 1960s, things seemed simpler. Consider the chart, which shows the pattern of unemployment and inflation during the business cycle of the Kennedy-Johnson years (1960-1969).

The points on the graph fit a trend line that economists call a Phillips curve — a curve that shows an inverse relationship between inflation and unemployment over the course of the business cycle. In this case, the value of the Nairu appears to be 6.7 percent, the level at which the inflation rate bottomed out and started to rise after reaching its low of 0.6 percent in the fourth quarter of 1961. The graph suggests that an unemployment target of about 4.3 percent would have been compatible with an inflation target of 2 percent.

In practice, alas, the trade-off between inflation and unemployment is far from consistent from one cycle of bust and boom to the next. The Phillips curve seemed to shift sharply upward in the 1970s — that is, it took a lot more unemployment to achieve a stable rate of inflation. And in more recent cycles, it is hard to find any trace of a classic downward-sloped Phillips curve. (For details, see the post on my blog, “What Ever Happened to the Phillips Curve?”) 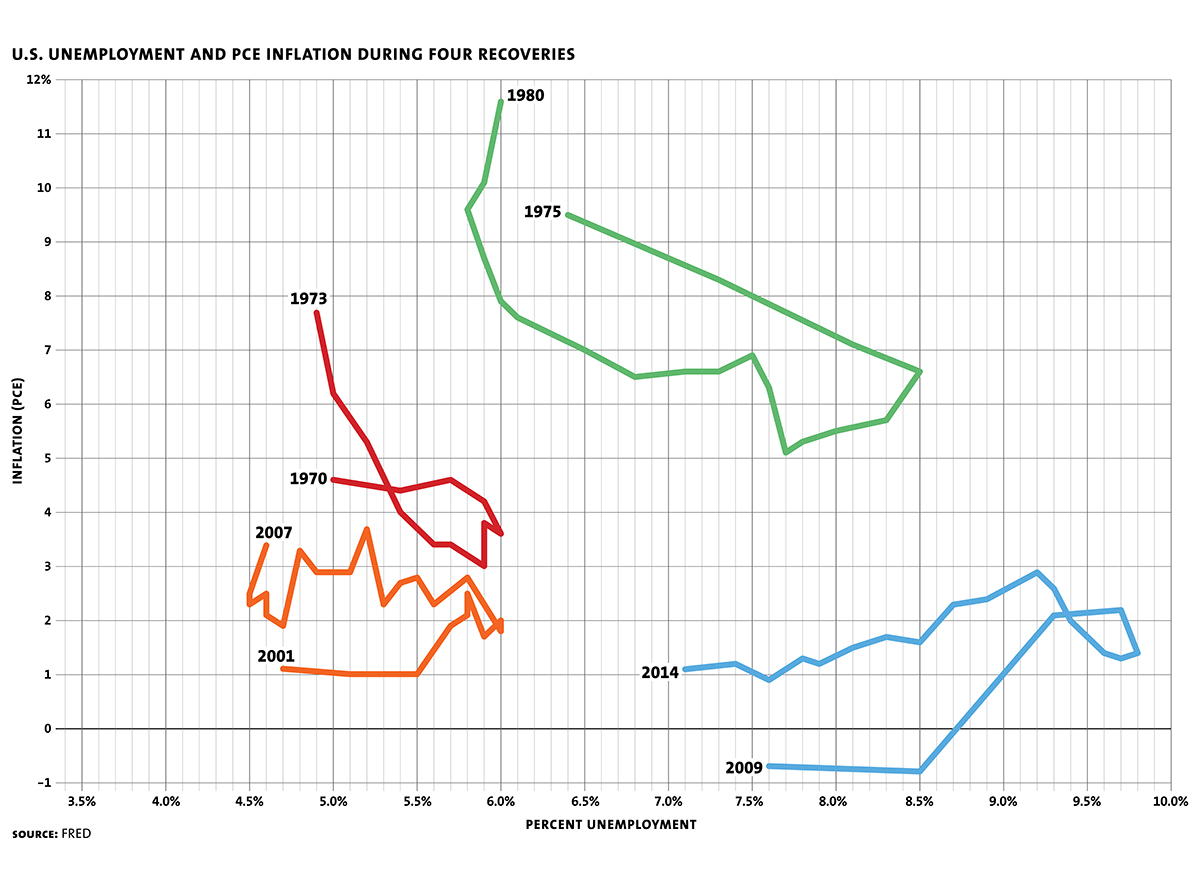 Economists, of course, don’t give up easily on ideas that seem like they ought to be true. So they’ve used a variety of statistical techniques to extract estimates of the Nairu from the fog of data. The results have not been entirely satisfactory.

For example, one widely cited study concluded that, as of the early 1990s, there was a 95 percent probability the Nairu was somewhere between 5.1 percent and 7.7 percent — a confidence interval so wide as to make the estimate of little practical use for policymakers. As importantly, the Nairu appears to move around a lot from cycle to cycle. Possible reasons include the changing demographic composition of the labor force, changes in the rate of productivity growth, and changes in policy that affect incentives to work such as the introduction of extended unemployment benefits during recessions.

The chart below shows estimates by the Congressional Budget Office of variations in the Nairu (or natural rate of unemployment, as the CBO still prefers to call it). 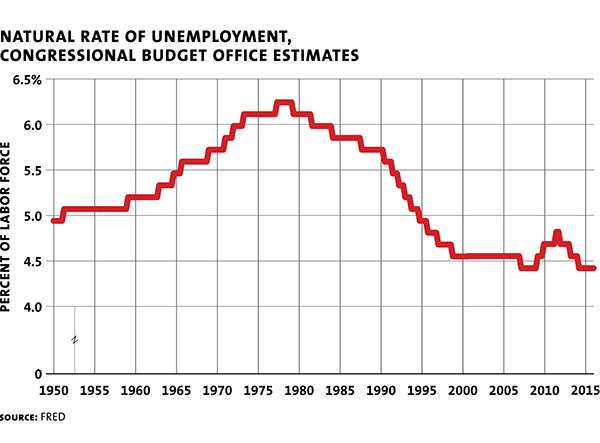 Of course, the CBO estimates are not the last word. Other economists, using other methods, differ on details but agree on the general pattern of an increase in the Nairu at the end of the 1970s, a long decline through the end of the century, and a smaller increase, more recently, during the Great Recession. And as of September 2016, members of the FOMC proposed estimates of the Nairu ranging from 4.5 percent to 5 percent, with a mean value of 4.8 percent. (For a full discussion, check out “The Nairu in Theory and Practice.”)

So, can we expect the Fed to tighten monetary policy at the December FOMC meeting? If we go by the Nairu and the 2 percent inflation target, it is hard to see why the committee would. The Fed has been undershooting the inflation component of its target and overshooting the unemployment component ever since the recovery began. The latest figures, an unemployment rate averaging 4.9 percent and a preliminary estimate of PCE inflation of 1.0 percent for the third quarter of 2016, still show some room to go on both parts of the dual mandate. Furthermore, some members of the FOMC think that the Nairu is lower than the 4.8 percent median estimate, and some think the inflation target should be higher than 2 percent — either of which would strengthen the case for waiting longer to raise short-term interest rates.

If the FOMC overcomes its fear of Trump-induced uncertainty and goes ahead with another rate increase next month, it will be less because of the current state of the economy than because of a desire to tighten policy well before unemployment and inflation have reached their safe limits. Partly, that is because monetary policy takes time to work. The Fed needs to act like a driver who slows down well ahead of a curve, rather than slamming on the brakes after the car starts to skid. Also, some economists (both within and outside the Fed) are worried that holding interest rates close to zero indefinitely could damage the economy by encouraging profligate borrowing (remember the mortgage bubble?) and leave less room to maneuver when the next recession strikes.

The bottom line: the Nairu is one of those good ideas who time has come … and gone … and come back (maybe). Consider yourself lucky you’re not sitting in Janet Yellen’s seat.