The Slowdown in Bank Lending

by william lee and jonathon adams-kane

The sharp slowdown in commercial and industrial lending (C&I, for short) over the past six to nine months — in contrast to an otherwise reasonably comfortable picture of modest growth in the American economy — is worrisome to say the least. Indeed, there is valid concern that the slowdown will threaten the ability of small- to medium-sized businesses to expand their operations and create the jobs needed to absorb an expanding labor force.

C&I lending is an important source of funding for business investment, and therefore a critical factor shaping the outlook for growth. The pause in lending is especially important for smaller enterprises that lack the ability to fund investment by issuing bonds or stock. 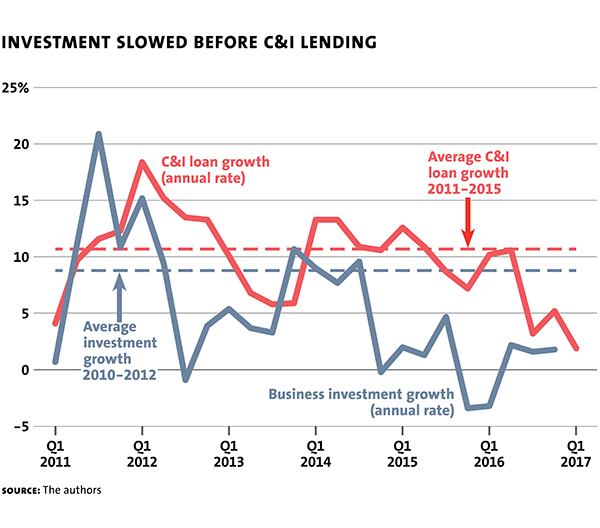 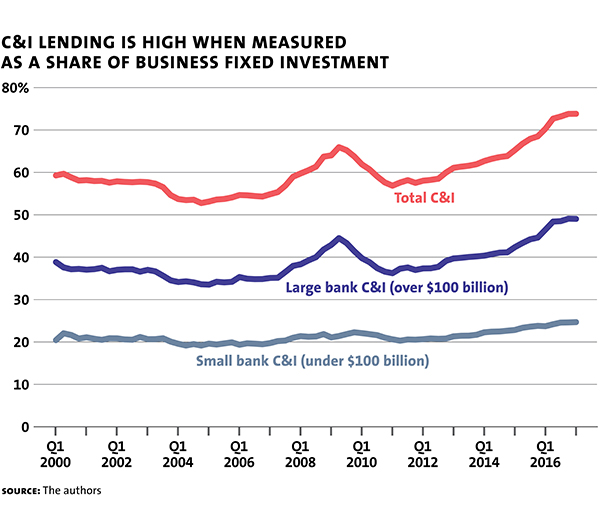 Some perspective is needed here. Total business investment was sputtering well before C&I lending took a dive, sinking well below its post-recovery (2010-12) pace in 2015, despite historically low interest rates. The tepid pace of investment can’t be attributed to the cost or availability of bank loans. Rather, investment slowed because businesses were (and remain) reluctant to add capacity because they face lagging product demand.

Indeed, executives would be hard-pressed to justify borrowing funds to expand when most firms are operating well below capacity and lack the market power needed to increase profit margins to pay for such borrowing. Moreover, it’s plain that slower growth of bank credit has not been a constraint on investment: C&I lending has risen to historically high levels when measured against the total volume of business investment.

That said, two disturbing trends in bank lending have emerged since the implementation of the onerous and complex Dodd-Frank banking regulations that may prevent smaller businesses from taking advantage of bank funding down the road. First, most of the rise in C&I loans since 2010 have originated from banks with assets exceeding $100 billion (approximately the 25 largest U.S. banks). Smaller banks played a diminished role.

Large and Small Banks Shifted to Make Large Business Loans Instead of Smaller Loans After Regulatory Tightening Began in 2010: 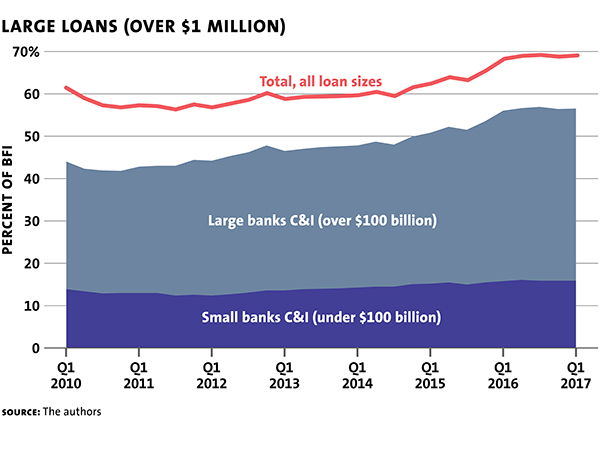 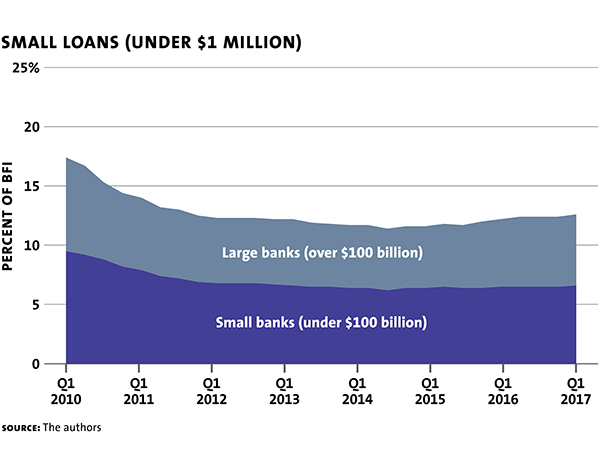 Second, post-crisis regulation has probably given both large and small banks incentives to shift their lending in favor of large borrowers. Loans issued for under $1 million were financing 17 percent of business investment at the beginning of 2010; today, that figure is less than 13 percent. By contrast, loans over $1 million have increased their share of investment financing from 44 percent in 2010 to almost 57 percent at the start of 2017.

We think that in the post-Dodd-Frank era, banks have decided that it is more cost effective to make larger loans because they now face higher fixed costs associated with the tightened regulatory and supervisory requirements. At a minimum, operating costs have risen for all banks because of the additional training and paperwork required to show that they have established enhanced compliance, due diligence and reporting/verification procedures.

For large banks, there are additional requirements for legal workouts and documentation of legal ownership and succession structures for various parts of financial conglomerates in the event of a bankruptcy (e.g., the “living wills” requirement for Dodd-Frank). Also, large banks are being challenged by the Federal Reserve’s more stringent implementation of the stress tests and qualitative risk management procedures mandated by the Fed’s Comprehensive Capital Analysis and Review (CCAR). And while the method by which these new overhead costs are allocated among bank activities is not always obvious, they probably disproportionately burden smaller transactions.

Consequently, we worry about the recent slowdown in bank lending — but not because it may foreshadow a worsening in the U.S. growth outlook. What is concerning is that most of the credit created since 2010 by both large and small banks has been in the form of large loans. Well-intentioned regulation aimed at stabilizing the post-crisis banking system continue to make it harder for the smaller firms responsible for most of the job creation in the economy to borrow.