A review of Hannah Rose Shell’s Shoddy: From Devil’s Dust to the Renaissance of Rags 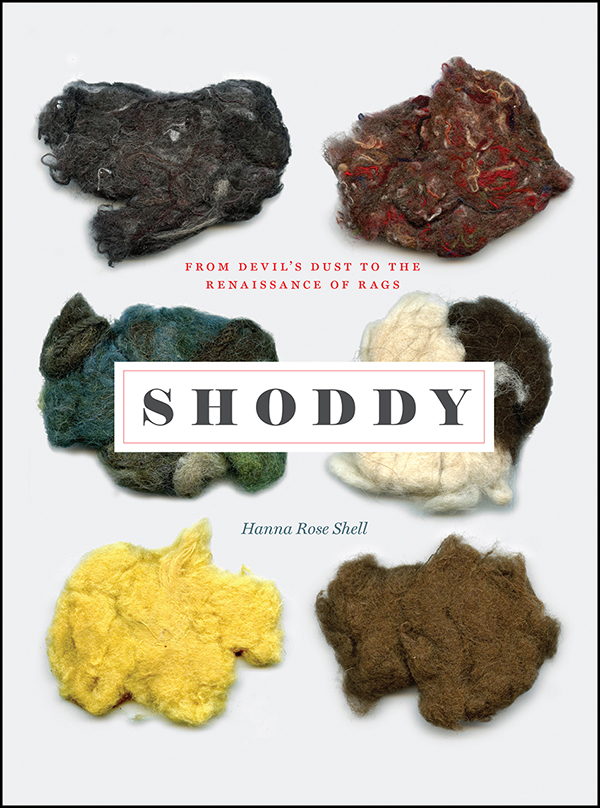 Shoddy: From Devil’s Dust
to the Renaissance of Rags

edward tenner, a research affiliate of the Smithsonian Institution and Rutgers University, is currently a visitor in the Program in Interdisciplinary Studies at the Institute for Advanced Study at Princeton.

Was it a coincidence that the University of Chicago Press published these two books in the same year: Wendy Woloson’s Crap: A History of Cheap Stuff in America and Hanna Rose Shell’s Shoddy: From Devil’s Dust to the Renaissance of Rags?

Well … yes. The apparent relationship of titles is deceptive. Indeed, the subjects of the respective books are not synonyms but opposites.

The cover designs tell the story. On Crap, it’s a page of novelty advertising in gloriously garish colors announcing the eponymous cheaply pretentious merchandise; on Shoddy, a set of six decidedly unpretentious commercial samples in somber hues, including one in sulfurous yellow. Crap (the subject, not the book) purports to be what it is not. Shoddy, an almost vanished industry in its original form, is openly, almost proudly humble in its second-class authenticity.

The word “crap,” though no longer taboo, is still a curt monosyllable, a scatological insult. “Shoddy,” which has come to represent poor quality in general, was originally a neutral description of uncertain origin. I, for one, think it has a beautiful sound; the homophone Shadi (“full of joy”) is a cherished given name and surname in the Middle East.

What’s Really in a Name

Not that there was anything intrinsically beautiful about the original shoddy, a fabric made by grinding up old woolen rags and then spinning the result into yarn to make cloth. The invention that made this possible was a toothed cylinder apparatus called a devil: hence “devil’s dust” for the new raw material it produced.

The author might have noted that the devil was contemporary with the American cotton gin and served a similar purpose, using rotating metal projections to monetize a previously underexploited resource (old rags and short-staple cotton, respectively). What’s more, the two textile revolutions were connected: one of the earliest markets for shoddy cloth, Shell writes, were the plantations of the American South, and the rough fabric was known as “slave cloth.”

When the Civil War arrived and Southern cotton was no longer available, Union soldiers were issued much-resented blankets and clothing made from shoddy. They despised the contractors who grew rich supplying them — Brooks Brothers among them. (The clothier’s first killing was selling surplus British naval coats during the nasty Panic of 1819. It’s unclear, though, who got the last laugh: Brooks Brothers declared bankruptcy last year.)

The producers of crap and shoddy viewed their respective industries quite differently. I doubt many veterans of the novelty trade would welcome a wandering scholar investigating their inglorious tchotchkes. But in West Yorkshire, the former world center of shoddy production, Hanna Rose Shell had no difficulty finding locals with fond memories to guide her. In the towns it dominated, nostalgia — even a sense of heritage — prevails. Indeed, in this grimy downscale industry there was pride of place in class-conscious Britain.

“Where there’s muck there’s brass [money]” is an old Yorkshire saying. And as one of Shell’s informants observed, “[I]f you went to a shoddy manufacturer and said his stuff was rubbish, shoddy, he’d probably hit you, because he thinks it’s absolutely marvelous what he’s making.”

To social critics, shoddy was a window on the seamy side of industrialization. Karl Marx saw it as the logical endpoint of capitalism, reducing matter to its most degraded constituents. Marx, it seems, despised even the rag pickers who supplied the industry, coining the insult lumpenproletariat [lumpen means rags in German] to stigmatize them.

What makes Shoddy  so remarkable is the author’s ambivalence about her subject, her acknowledgment of the mills’ odor and squalor together with her appreciation of the communities the industry nourished.

On the positive side, Benjamin Disraeli (a very successful fiction writer as well as a very successful politician) was fascinated by the circulation and recirculation of clothing as a metaphor for the human condition. Disraeli’s blockbuster tome on British inequality, Sybil, features an abandoned boy who makes his fortune beginning as a worker in a factory transforming “waste and damaged cotton, the refuse of the mills,” into useful products. Improving himself through diligent reading, Devilsdust (as he is nicknamed) refashions himself as the “leading spirit of the Shoddy-Court Literary and Scientific Institute.” In Disraeli’s Tory-radical view, with the right attitude, the path was open even for members of the lumpenproletariat to join the bourgeoisie.

Far from being an obscure and disreputable part of British life, from Queen Victoria’s reign at least through the Thatcher years the shoddy industry was a central feature of the global commerce in textiles and clothing that Britain long dominated, gathering immense quantities of rags from all over the world to make carpets, mattress stuffing and eventually even loudspeaker cones. Nor did the wonders of recycling end there. Even the waste from the process of making shoddy was prized by local farmers as nitrogen-rich fertilizer, helping create a Yorkshire gardening hot spot called the Rhubarb Triangle.

Understandably the producers of “virgin” wool in the U.S. as well as the UK regarded the surreptitious adulteration of their product mixed with the minced detritus of still malodorous and possibly infected old clothing as unholy. The content tags you see on clothing — and especially those “Do Not Remove Under Penalty of Law” labels on mattresses, pillows and upholstery — are the fruits of campaigns waged by these interests, nominally for the purposes of consumer protection.

Shell discusses at length the debates over the sterilization of recycled rags during the cholera epidemics of the late 19th century and the related anxiety about diseases borne by immigrants. She surprises us with the centrality of shoddy in arguments over free trade and protection, aristocracy and democracy, in the Victorian era.

Shell explains the practical difficulties of fumigating huge bales of rags imported from who knows where. But I would have liked to know more about what today’s microbiologists and public health researchers have to say about the risks of contagion, today and yesterday, and especially in light of the Covid-19 pandemic. How, for example, did morbidity and mortality of workers in shoddy mills compare with those of employees of other textile industries? Did they ever go on strike over working conditions or wages?

Unanswered questions aside, what makes Shoddy so remarkable is the author’s ambivalence about her subject, her acknowledgment of the mills’ odor and squalor together with her appreciation of the communities (and the rhubarb farms) the industry nourished. She discovers a romantic side of what others might dismiss as malodorous heaps of waste: the exotic weeds that flourished from seeds that traveled across the oceans with their moldering cargo to take root on British soil. She notes with regret that sterilization of the waste has halted this efflorescence.

If medical concerns have weighed on the remnant of the shoddy industry, the quest for environmental sustainability has been giving it new life. It can no longer be seen as merely the dark heart of capitalism, but as the harbinger of a future zero-waste society. The global market in old clothes is still thriving in new forms.

Meanwhile in the Yorkshire town of Batley, once the heart of shoddy manufacturing, the arrival of synthetics has made traditional recycling of woolens almost impossible. The showy, often poorly constructed clothing of today’s soon-discarded fast fashion poisons the fiber stream with unassimilable synthetics: a victory of crap, you might say, over the traditional rag trade. Worn polyester is not even shoddy.

Considering today’s trend toward recycled garments, a verse comes to mind from Gilbert and Sullivan’s satirical comic opera, The Gondoliers (1889), a fable about a king who bestows limitless honors on his subjects:

When you have nothing else to wear
But cloth of gold and satins rare,
For cloth of gold you cease to care —
Up goes the price of shoddy.

And so it has risen. Not only are fashion chains and startups developing high-tech ways to separate and rework garment fibers, but the Wall Street Journal has listed a $1,500+ Bode quilted jacket, made from “a patchwork of upcycled fabrics” as one of “10 Cult Fashion Items That Stand the Test of Time.”

In the end, whatever value one finds in shoddy, Hanna Rose Shell deserves a salute for spinning rags into gold.