The very basis of American freedom, the idea that if you work hard you should receive the fruit of your labor, long preceded the Declaration of Independence — but not for all men. Slaves were used by British colonists since the beginning of the 17th century. The “peculiar institution” spread its tentacles throughout the American South, gaining momentum with the rise of the cotton economy and only ending with the Civil War and the 13th Amendment to the Constitution a quarter of a millennium later. African-Americans represent the only group to ever be enslaved on U.S. soil. And on top of the utter inhumanity and indignity of slavery came enduring economic disadvantage in ways both obvious and subtle. Slaves, of course, were denied wages. But almost as important, slaves could not save for investment. Or, to put it another way, they could not amass capital precisely because they were capital — bought, sold, traded and insured by those who enslaved them.

Slavery was abolished 166 years ago. But the ongoing cost of the legacy of slavery serves as a tax on African-Americans, with collateral damage to the nation as a whole in the form of a drag on economic growth. A September 2020 report by Citi GPS (part of Citigroup) estimated that just the past two decades of bias against African-Americans cost the U.S. economy $16 trillion in GDP. By the same token, if all bias against Blacks disappeared overnight, Citi estimated that GDP would grow by an extra $1 trillion annually for the next five years.

Slavery and its legacy erode African-American wealth as well as incomes. Indeed, slavery created an ongoing transfer of wealth unparalleled in America’s history. In 1840, the “market value” of slaves was double the capital investment in the entire railroad system, which was thought to be the most valuable asset in America at that time. Natchez, Mississippi, a river port that specialized in the slave trade and the export of cotton, was the wealthiest city in the world (in per capita terms) in 1840.

There have been two signal attempts by the U.S. government to honor the Declaration of Independence’s promise and restore basic humanity and dignity to the African-American experience. But, in each, legitimate efforts to undo the impact of institutional racism were parried and upended.

The First Reconstruction followed the Civil War and addressed fundamental issues of equality. The centerpiece was the Freedman’s Bureau, which was chartered to provide practical aid to 4 million African-Americans in their transition to freedom. It created schools, hospitals and other infrastructure meant to assist the Black population in joining American society on equal terms.

The Freedman’s Bureau also created the Freedman’s Savings Bank in March 1865, which was chartered to encourage economic development in Black communities and, more broadly, to teach freed slaves about money. This was, in effect, the vanguard of a plan to provide Blacks with much-needed financial literacy as they confronted America’s free enterprise system as free labor rather than as somebody else’s capital. But in the wake of the assassination of President Lincoln, which blunted Washington’s will to follow through on its promises, and despite the efforts of the great ex-slave Frederick Douglass to save it (investing $10,000 of his own funds in the process), the bank failed in 1874.

More than 73,000 former slaves lost their savings in that failure. It is thus understandable why many Black Americans today are hesitant to trust the American banking system. After all, the Freedman’s Bank was the government’s bank, and the government abandoned it.

Much worse was to come. The Compromise of 1877, in which Congress brokered a deal to settle the disputed presidential election of that year, pulled federal troops out of the Southern states and effectively ended Reconstruction. The postwar initiative to move the formerly enslaved African-American population from the plantations to their own sustainable farms was aborted.

This period, highlighted by the emergence of the civil rights movement, aimed to move African- Americans from basic civil rights and civil liberties guaranteed by the Constitution straight into the mainstream of American life. That included equal access to public facilities, housing and good jobs — and, for many, attainment of middle-class status through higher education.

The struggle for true freedom in these years brought Blacks from the shadows of society to openly protest for their rights in the streets of America’s cities. The signature voice of this period was, of course, Dr. Martin Luther King Jr., who roused the nation’s soul with his “I Have A Dream” speech on the steps of the Lincoln Memorial.

The fruits of this period included growing inclusion of Blacks in the workforce and a significant increase of Blacks in all levels of government. The Second Reconstruction dramatically ended with the assassinations of both Dr. King and Attorney General Robert Kennedy in 1968. In the wake of these wrenching events, the air in the balloon of hope seemed to disappear.

Over the course of just six months in 2020, America’s prosperity was disrupted by a) the deadly pandemic, b) an economic crisis that, albeit briefly, rivaled the collapse of the Great Depression, c) a movement for social justice from Black America in the wake of yet more acts of police violence and d) a crisis of confidence in our democracy resulting from an attempt to overturn the legitimate results of a presidential election. 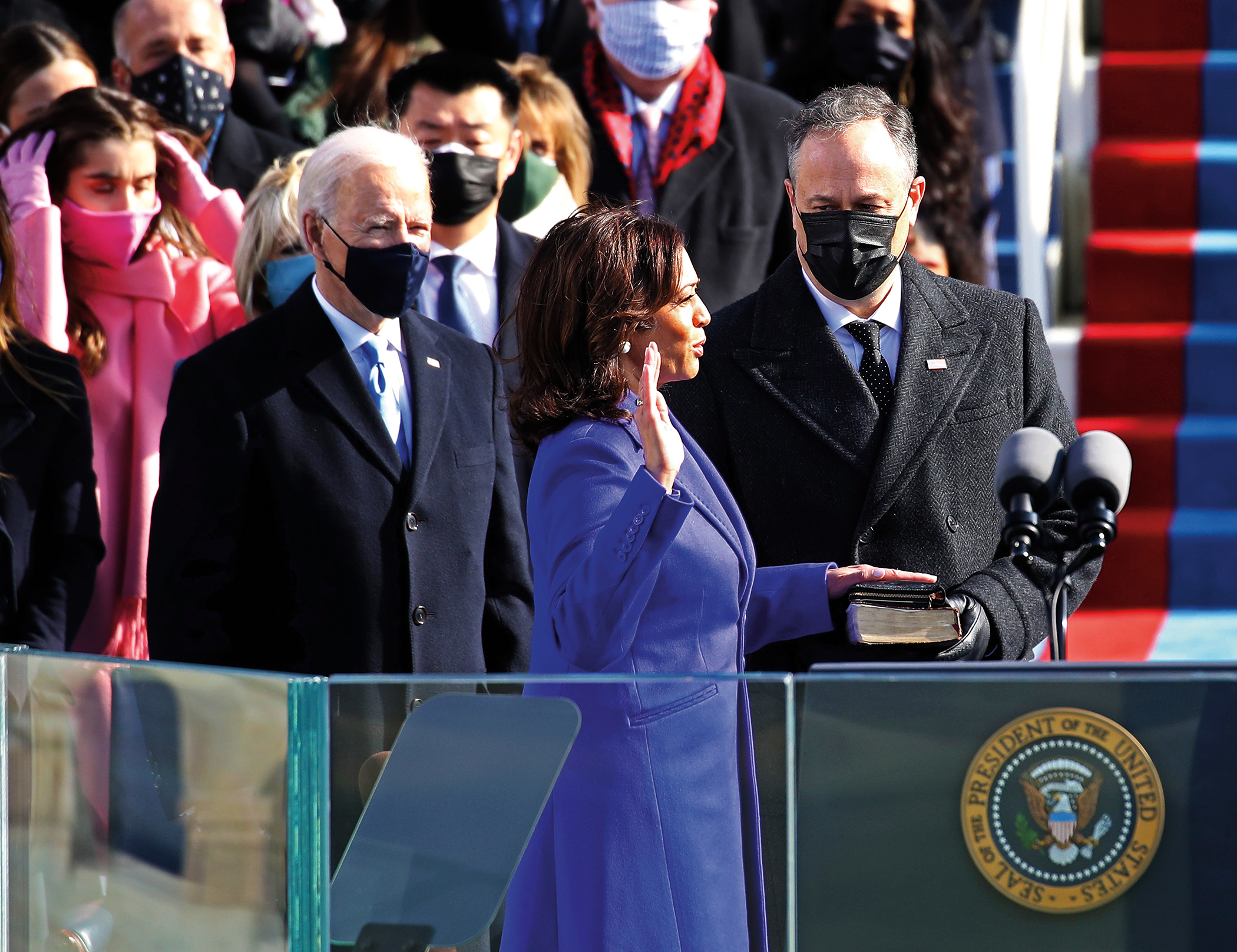 Thanks to Covid-19 lockdowns and the ubiquity of video screens, the vast majority of Americans witnessed the death of George Floyd at the hands of the police. Six months later, Americans were still at home in front of those screens, this time witnessing the first assault on the U.S. Capitol since the War of 1812. (But back then, it was the British doing the assaulting.)

Operation HOPE believes that the 10 years beginning in the tumultuous year of 2020 will come to be remembered as the decade of the Third Reconstruction. This is our time as one nation to reset assumptions of who we are as a people and to rededicate America as a bastion of fair play and justice.

Operation HOPE believes that America is at war, both with foreign economic interests who want to replace America as the sole superpower and with alienated fellow Americans who have lost faith in America’s shared aspirational dream — and in each other. The first war we should win, and the second one we must.

Operation HOPE believes that America is not so much a country as an idea, and, in this era, we must re-imagine her with new dedication to both cultural and economic greatness.

Calls to the better angels of our nature will get us only so far, though. Even in a society as fractured as ours appears today, individuals who are separated by black and white and red and blue can find common cause in the color green — the color of U.S. currency. Indeed, we strongly believe that the primary issues driving division in America today are linked to poverty and economic immobility rather than race and ethnicity. And the most direct route to social justice is through economic opportunity and financial inclusion.

The private sector, where nearly 90 percent of all jobs originate and substantially all legitimate wealth is created, will play an important role in the Third Reconstruction (as it did in the Second). After all, the private sector was principally responsible for integrating the American South during the civil rights movement of the 1960s. It was business — not the government — that first took down the “whites only” signs and eroded the color line on good jobs.

Operation Hope has advanced the idea of a New Marshall Plan, one with an emphasis on federal government leadership and focused on national initiatives that could have outsized impact on a nation badly in need of recovery — a war plan of sorts. The Third Reconstruction Plan is aimed at the private sector, with the focus on economic mobility and fostered by expanded opportunity.

Taken together, the New Marshall Plan and the Third Reconstruction Plan represent our ambition to narrow the wide divisions in American society through a combination of public and private initiatives. The idea is not just to get us all back to work, but to build us back stronger and more resilient — and generate a sustainable rising tide that lifts all boats.

1. Financial Literacy for All. An initiative led by Walmart CEO Doug McMillon and Operation HOPE Founder John Hope Bryant to rally corporate leadership in favor of making financial literacy a core civil rights issue of this generation. This also includes a national financial coaching program open to all Americans.

2. One Million New Black Businesses. A 10-year partnership led by Shopify President Harley Finkelstein and Operation HOPE Founder John Hope Bryant, and backed by a $130 million commitment from Shopify, to create a million new Black-owned businesses and a flood of new Black entrepreneurs.

3. The Corporate Inclusion Project. Led by corporate leaders and Operation HOPE, this initiative aims at renovating career opportunity within corporate America. It will focus on increasing the numbers of minority internships, apprenticeships, managers and seats on company boards of directors.

This last and hopefully final phase of Reconstruction is designed to move Blacks from the frustrations of street protests to the satisfactions of equal economic access — to expand free enterprise so that it serves all of God’s children.