A review of Crap: A History of Cheap Stuff in America 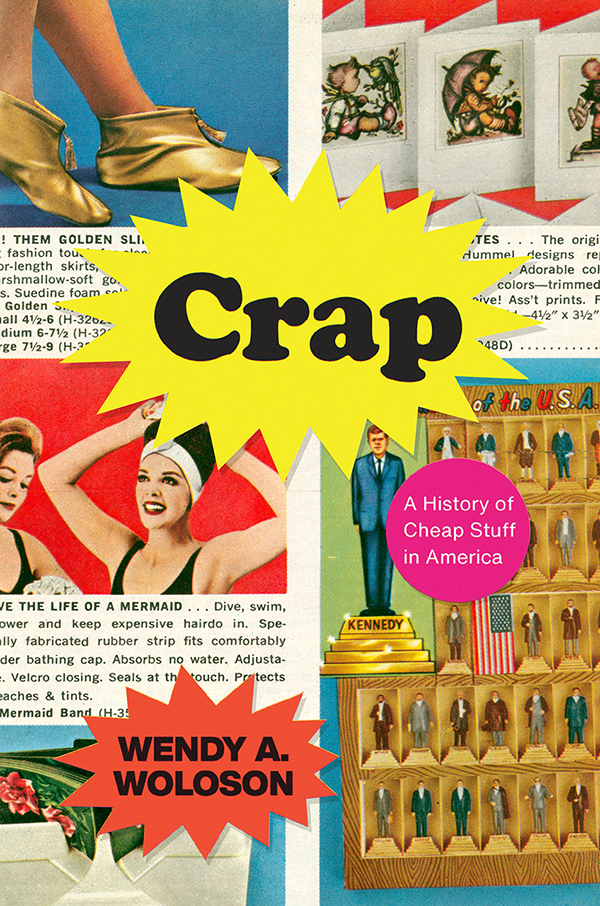 Crap: A History of Cheap Stuff in America

edward tenner, a research affiliate of the Smithsonian Institution and Rutgers University, is currently a visitor in the Program in Interdisciplinary Studies at the Institute for Advanced Study at Princeton.

The most vexatious variable of economic life has always been quality. Producers have countless ways to describe it — from quantified abrasion tests for textiles through mean time between failures and duty cycles for machinery (hours or cycles of use a product a device is built to withstand). The Bureau of Labor Statistics even adjusts the Consumer Price Index to reflect changes in the features of products. In the deep state this process is called “hedonic quality adjustment.”

Wendy Woloson’s new book, Crap: A History of Cheap Stuff in America, is about another enigma of quality: how advertising persuaded people to find salvation in the superfluous — a distinctively American form of what Karl Marx called commodity fetishism. Crap need not be cheap or badly made. Its essence is promising more than it delivers.

Challenging the earlier optimism of the novelist Theodore Dreiser (who praised five-and-dime stores for extending small luxuries to the masses) and mid-20th-century scholars, artist and critics celebrating pop-culture trifles, Woloson acknowledges crap’s benefits while finding the hype not only seduces the working class but also corrupts the well-off.

For Woloson, a historian at Rutgers-Camden, the origin of crap is in the culture of advertising and promotion — and, above all, in the legions of peddlers who plied the back roads of the new nation in the late 18th and early 19th centuries with stocks of cheap showy novelties and a spiel that made them seem magical. The variety itself could be mesmerizing in the era before modern newspapers and magazines, when the peddler’s pack was a rare window into the ideas and fashions of the wider world.

Echoing Humbug, the University of Chicago historian Neil Harris’s study of P.T. Barnum, which showed how visitors to the great showman’s so-called American Museum in New York were not suckers but skeptical admirers curious about whether and how they were being deceived, Woloson cites the mixture of scorn and fascination that greeted the peddlers’ “flummeries” and “quirks.” Soon “variety stores” offered a similar range of novelties unavailable in traditional general stores, and with a similar ballyhoo.

The economic instability of the early republic helped supercharge the trade, as auctioned-off surplus stocks of imported merchandise supplied endless baubles at “panic prices” following the nasty financial crisis of 1819. Making lemonade from life’s lemons is as American as apple pie. And when no financial crash was at hand to unleash bargains, entrepreneurs in Britain, continental Europe and Asia eagerly supplied the gewgaw market. Globally sourced crap is, paradoxically, also a traditional American custom.

One of the innovations of the variety trade that disturbed upright contemporaries was deliberate obfuscation of previously objective measurements like the width of fabrics and the gauge and number of pins. Part of the appeal of crap was the novelty and uniqueness that made it difficult to compare with conventional articles.

One of the best ways to sell crap turned out to be to prime the pump with genuinely good value. F.W. Woolworth himself discovered that by displaying unsalable merchandise alongside quality handkerchiefs at the same price, customers could be induced to believe that everything on the table was of equal value and to buy everything in sight. Yet as Woloson also acknowledges, Woolworth had a sound intuitive sense of the kind of showy design that would appeal to consumers.

In making the transition to the chain store and department store era of the 20th century, Woloson must qualify her critique of crap. If cheap merchandise was a rip-off, it should have been profitable — and may, indeed, have been in the era of variety stores. But Woolworth’s and Kresge’s faced low margins and needed rapid throughput, turning over inventory as many as five times a year. Perhaps consumers just enjoyed a greater variety of inexpensive purchases as opposed to the fewer and more durable ones that moralists and environmentalists have long urged upon them.

Woloson shifts her critique to the 20th-century roots of globalization in discount merchants’ search for cheap labor — and their encouragement of exploitation of workers in nations like Germany and Japan, today, of course, noted for high-quality goods and corresponding labor costs. If we look for the architects of fast fashion, eviscerated in books like the journalist Elizabeth L. Cline’s Overdressed, they may have been the buyers of early 20th-century price-cutting retailers.

And yet exploitation and quality were distinct issues. Some of the garments produced by sweatshop workers, like those who died in the Triangle Shirtwaist Factory fire (1911), were well made, serviceable and practical — the opposite of crap, though produced at a sometimes shocking human cost. And American consumers did not always choose the lowest priced item. Mail order catalogs, ancestors of today’s e-commerce, offered shirtwaists at prices from 25 cents to $7.00.

Almost everyone who reads this book will be (or should be) at least slightly ashamed about some of their own purchases, whether or not they accept Marx’s view of consumer society.

Woloson is correct, though, that the big box stores and dollar stores of the late 20th and early 21st centuries have refined the dubious practices of their early 20th-century predecessors, sometimes showing even more contempt for the discernment of consumers. She pays surprisingly little attention to the counter-trend of the rise of consumer reviews after online stores found the feedback had a net positive effect on sales, even accounting for negative comments. Whatever their other faults, retailers do not always obfuscate quality issues.

There is a certain disconnect between the early chapters of Crap dealing with the efflorescence of variety and those on the diversity of 20th-century crap. Some of the more recent examples, like the proliferation of cheap premiums and giveaway merchandise, extend the story of Americans’ passion for showy trifles. (Woloson reveals, among other things, that many small manufacturers were able to survive in the Great Depression by furnishing cheap items to be given away with purchases at chain retailers who were taking advantage of consumers’ irrational preference for free crap on the side over lower prices.)

On the other hand, the appeal of gadgets differed from that of the offerings of early peddlers and variety stores. Gadgets could be flimsy and badly designed, but they could also be durable. Some, especially those sold by upscale retailers like Hammacher-Schlemmer and The Sharper Image, were marketed as executive toys. As Woloson recognizes, others, like the Singer sewing machine, were spectacularly successful, increasing productivity five-fold over hand stitching. And far from being an impulse purchase, the sewing machine was so expensive that marketing it demanded elaborate showrooms and time-payment plans.

When considering all the outlandish patents that appear in humorous anthologies, and the few long-term successes, the science fiction writer Theodore Sturgeon’s law comes to mind. Yes, he once acknowledged to a critic, 90 percent of science fiction is crap. But, he countered, 90 percent of everything is crap.

The critique of collectibles and the booms and busts of manias like Beanie Babies and Franklin Mint commemorative plates is a welcome excursion into the darker side of marketing. But while the quality of these products is indeed dubious, the psychology of collectors who think they are investing for the long term was radically different from that of the variety and fast-fashion consumer.

Admirably researched, vividly written, handsomely illustrated and ethically passionate, Woloson’s book is both an absorbing history and entertaining diversion. Almost everyone who reads it will be (or should be) at least slightly ashamed about some of their own purchases, whether or not they accept Marx’s view of consumer society.

It is also a mistake to identify American consumer culture only with the shoddy and ephemeral. Nineteenth-century Europeans valued some distinctively American products like common felling axes (the sort used to chop down trees). Watches were mass produced to high international standards in Waltham, Massachusetts, and Elgin, Illinois, before the industry’s shift to Switzerland and Asia. Americans prized not only shoddy novelties but also sturdy and utilitarian Quaker products. Along with dubious gadgets, many high-quality hand tools were once made in America.

Sadder than Americans’ age-old weakness for the pitchman’s spiel is the decline of so many of our solid utilitarian products and brands — the happy medium between crap and luxury that is endangered along with the middle class that buys them. Brooks Brothers, which just declared bankruptcy, got its start selling short British sailors’ coats called monkey jackets — crap, perhaps, but warm and useful in our winters — to American workmen. One hundred fifty years later, one of Europe’s wealthiest and most stylish men, Gianni Agnelli, was wearing Brooks Brothers button-down shirts.

Crap is especially pertinent now that the Washington Post has recorded a Great Decluttering in the wake of Covid-19. Will more/different crap return to fill the vacuum, or is the pandemic a turning point in Americans’ love of junk? Either way, this is a landmark book.