ross devol is the chief research officer of the Milken Institute.

Among the many targets of President Trump's initiative to cut federal discretionary spending outside defense are the subsidies going to American research universities. I can sympathize with his broad goal of reexamining spending with a critical eye. But taking a whack at research support would put far higher goals at risk, blocking efforts to speed the technological change that underpins economic growth. If the research cuts become law, a key driver of America's innovation engine would be left without its supercharger.

Federal funding for university research, through agencies including the National Institutes of Health, National Science Foundation and the Small Business Administration, has long been seen as an essential investment in the nation's long-term economic growth. Indeed, such funding catalyzes growth through a whole host of channels: information exchange between academic and private-sector researchers help accelerate the transformation of innovation into commercial application through entrepreneurial activity.

The proposed cuts wouldn't be felt immediately, but they would reduce R&D throughput, undermining entrepreneurial drive and ultimately costing America the technological edge that has created highly paid jobs and provided products that make us healthier, safer and more productive. The numbers are nothing to sneeze at. For example, the administration's proposal would take 20 percent — nearly $6 billion — from the NIH in 2018. And Milken Institute analysis has shown that, on average, a dollar invested in research at the NIH generates over $3 dollars in output over the long-term in the bioscience industry.

The University of Utah has quietly evolved into one of the most prestigious research universities in the United States with a strong emphasis on commercializing its research. 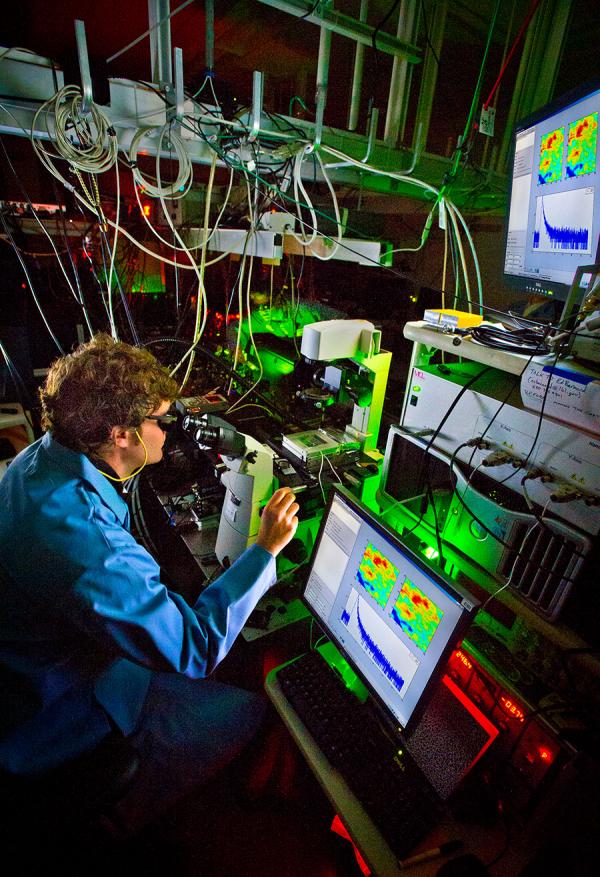 Additionally, the proposed budget would eliminate the SBA's 14 Regional Innovation Clusters, a program supporting small, high-tech innovators, many of whom are academics attempting to commercialize their research outside the purview of Silicon Valley. There's good reason to believe that modest investments in innovative startups can lead to remarkable economic success. A similar SBA program that provides seed capital for investment in small, privately held businesses helped launch Apple, Intel and Federal Express — companies that have not only created thousands of jobs, but changed the way we live.

The modern era of university commercialization began with collaborative research on recombinant DNA conducted in the 1970s by Stanley Cohen at Stanford and Herbert Boyer at the University of California (San Francisco), which led to the birth of the biotechnology industry. Subsequently, the Bayh-Dole Act of 1980 gave universities and federal laboratories ownership of their intellectual property and the right to license it.

The prospect of a new source of income from licensing, spinoffs and joint industry research in an era of tight public funding acted as a major inducement for universities to support academic researchers who wanted to translate their ideas into profits. And it led to the creation of institutions, formal and informal, to support these initiatives – everything from university-based technology transfer offices (TTOs) to private equity outreach.

Most major U.S. research universities now support a TTO that actively seeks, registers and patents IP and manages the commercialization of their discoveries. Professional TTO staff regularly engage with university researchers to assess whether there is potential profit to be had from early-stage research.

The majority of these knowledge spillovers are highly localized. In a 2015 study, the Milken Institute described and documented this supplier network, including research universities and government labs that commercialize research in the form of spinoff firms or via licensing to established firms.

We have created a composite metric of the primary channels of research conversion to IP, as measured by patenting and licensing activity that leads to either academic startups or externally formed entrepreneurial entities, along with the income that accrues to a university from licensing its IP. There are many other potential metrics for evaluating the success of university IP dissemination to the marketplace. However, gaps in comparable data availability across universities preclude including other measures.

Development of an aggregate ranking across research universities with multiple disciplines is fraught with challenges. Nevertheless, we think we've succeeded with the University Technology Transfer and Commercial Index as a benchmark for assessing the relative position among peers and in recognizing best practices. 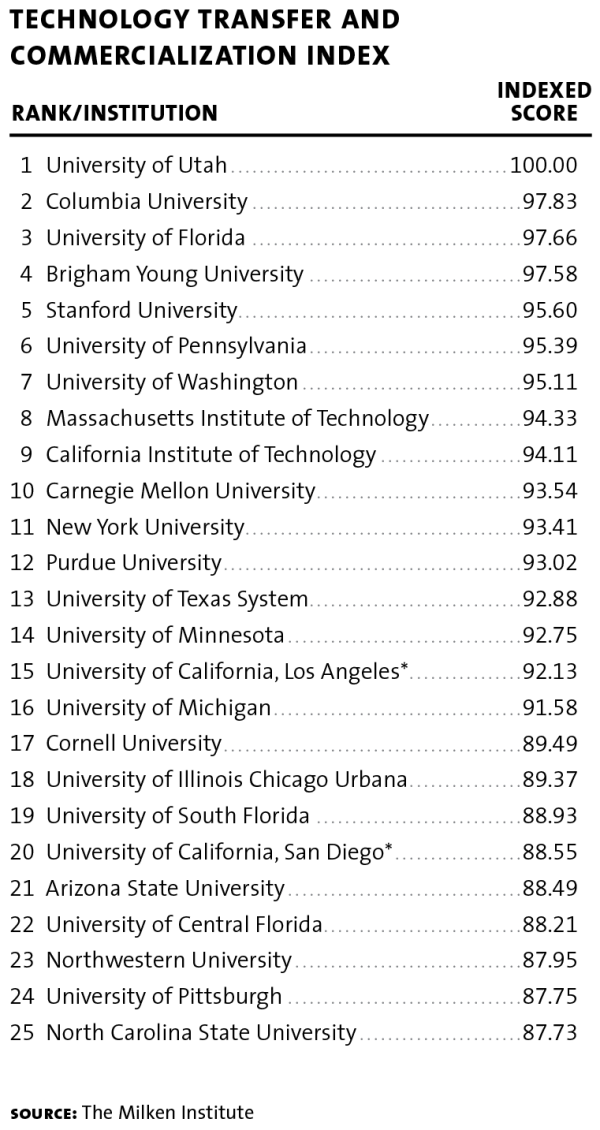 The Index is largely based on data collected by the Association of University Technology Managers (AUTM) via the AUTM's annual licensing activity survey. The Index is measured using four-year averages (2012-15) for four key indicators of technology transfer success: patents issued, licenses issued, licensing income and startups formed. These are normalized based on a four-year average of research dollars received by each university to yield four additional variables.

When ranking and scoring the Index, a primary consideration is to determine the appropriate balance between absolute and relative measures of commercialization. Scale is important; we would expect a large research university that attracts substantial public funding to achieve superior commercialization outcomes relative to smaller institutions. However, absolute outcome measures don't address the productivity or efficiency of commercialization activity. For this reason, we include the outcome metrics adjusted to reflect research expenditures.

The University of Utah ranks a surprising first on our Index, up from 14th in our original ranking released in 2006. The institution has quietly evolved into one of the most prestigious research universities in the United States with a strong emphasis on commercializing its research.

Columbia University is second on the Index. It was not included in the original 2006 ranking, as the university didn't participate in the AUTM survey back then. This time around, though, Columbia recorded stellar performances across many indicators, and stood out in licensing income. The University of Florida is third, up from fifth in 2006, close behind Columbia University. Many are aware of the tremendous income that Gatorade has provided the University of Florida, but the university's overall success is due to much more than one product.

Yet another Utah institution, Brigham Young University, is fourth in the rankings, up from seventh in 2006. BYU performed admirably across all metrics, standing out in its ability to spawn startup companies and its efficiency relative to research spending. Stanford University's high placement, coming in at fifth, shouldn't surprise anyone who pays attention to initial public offerings or tech stock market capitalizations. While Stanford's rank edged down from fourth in 2006, the university didn't fall — others rose. The University of Pennsylvania ranked sixth, up from 12th in 2006.

The University of Washington ranks seventh, a notable increase from 24th in 2006. The Massachusetts Institute of Technology ranks eighth, down from first in the 2006 index. However, we should not assume MIT's commercialization prowess has diminished; its lack of a medical school explains the relative decline. The California Institute of Technology ranks ninth. Patents have been a particular strength – Caltech outperformed all its peers with more than 660 patents issued to the university between 2012 and 2015. Carnegie Mellon University in Pittsburgh rounds out the top 10.

Higher rates of academic entrepreneurship are essential to reviving the declining startup rates and productivity across the entire economy. New firms have higher productivity as they are at the cutting edge of technology.

Research universities remain one of the strongest assets America has to compete in an era in which virtually all growth in high-income industrialized economies is driven by innovation (rather than increases in capital or labor). While the numbers are hard to pin down, the average social rate of return on federal and other sources of public funding for university research is exceptionally high. Cutting subsidies for university research thus has all the earmarks of eating the proverbial seed corn.

Universities that succeed at technology transfer and commercialization include both public and private universities. They are spread across the country, with 13 of the top 25 based in red states. These universities can typically do double duty, creating high-paying private-sector jobs in their localities as well as accelerating economic innovation. One related point should be noted: while university-based innovation is hardly confined to blue states, the blues have been much more successful in leveraging university research to build technology clusters.

In light of all this, it seems clear that an important goal of innovation policy ought to be strengthening university-driven research, not undermining it. To that end, I believe the following:

• It makes a lot of sense to maintain current levels of university science funding and, in particular, funding for basic science. Basic research subsidies provide long-term benefits by allowing universities to take on research that has a low probability of quick commercial success, but potential to deliver a high reward — even to create whole new industries.

• The transfer of university technology to commercial use could be made more efficient with incentives from a new federal commercialization fund. The idea would be to create a special commercialization pool, which included resources for monitoring innovation-pipeline metrics. Universities demonstrating greater success in market commercialization would receive more money.

• By the same token, it would make sense to increase technology transfer capacity through federal matching grants. Federal dollars could pay for increases in staff and resources at TTOs. Higher rates of academic entrepreneurship are essential to reviving the declining startup rates and productivity across the entire economy. New firms have higher productivity as they are at the cutting edge of technology.

• States have an opportunity to increase technology transfer efficiency by adopting best practices. If efficiency gaps between universities outside of the top 25 in our University Technology Transfer and Commercialization Index were narrowed, there would be substantially more funds available for investing in additional research and academic programs, not to mention higher private-sector job creation.

Many observers view President Trump's “skinny budget” as little more than a negotiating position for the administration's coming battles with Congress. But targeting programs that support the innovation economy, especially those that fuel the commercialization of university IP, seems a very wrong place to start.