What’s in a Number?

A Review of The Week: A History of the Unnatural Rhythms That Made Us Who We Are 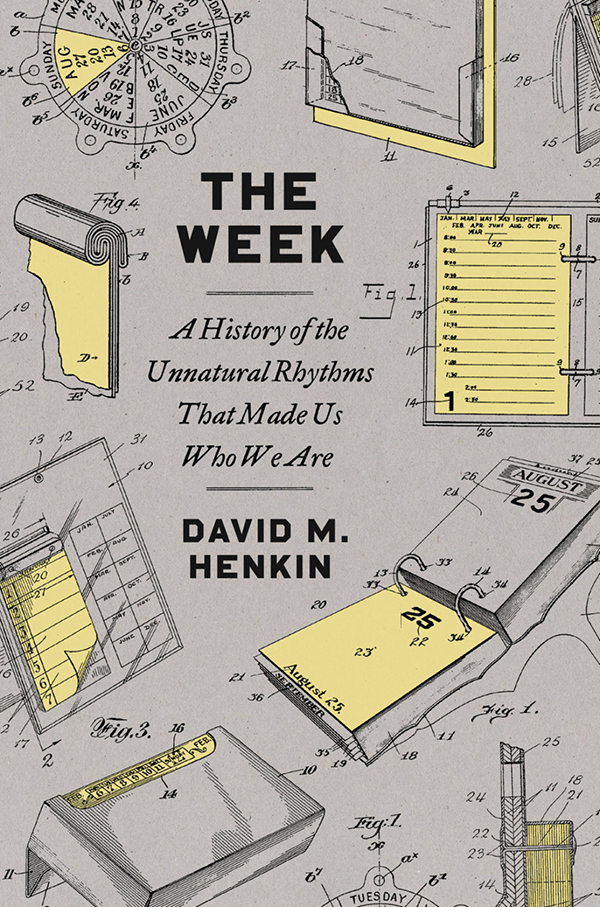 The Week: A History of the Unnatural Rhythms That Made Us Who We Are

Days, months and years are governed by the revolutions of the Earth and moon. Weeks are different.

“Different” is an understatement. Weeks are unconstrained by the physical world so they are subject to the whims of different cultures. The ancient Romans did not even have weeks as we know them. A month began on a day called the kalends, whence our word “calendar,” and was roughly divided in two by the ides on the 15th or 13th. To complicate matters further, there were also the nones on the fifth or the seventh day, dependent like the ides on the length of the month. Days were named by counting backward from the kalends, nones, or ides. Yet Rube Goldberg chronology — and the supposedly awkward Roman numerals that went with it — did not hinder the Empire from conquering a large part of Eurasia. (Roman numerals actually worked surprisingly well with the now-obscure Roman abacus, but that is another story!)

Our familiar week seems the ultimate in rationality compared with that ancient system. When the classic sociological study of how we got from there to here, Eviatar Zerubavel’s Seven-Day Circle, appeared in 1986, one of many enthusiastic reviewers noted that the book’s strength — a survey of the myriad ways of organizing chunks of the month ranging from two to 22 days — was also a weakness. Zerubavel did not analyze weekly rhythms in any single society in “continuous historical perspective.”

David M. Henkin, a professor of American history at the University of California (Berkeley), has now filled that gap with The Week, by largely limiting himself to the United States, and to the various institutions that promoted the organization of life in seven-day units. Like Zerubavel, Henkin came to his subject from a sabbath-conscious Jewish background. And he agrees with Zerubavel on the Judeo-Christian and Islamic roots of weekly sabbath observance, continuous despite the shift of the day of rest in most Christian denominations to Sunday, and in Islam to Friday.

While all Christian societies in early modern Europe recognized Sunday, Roman Catholics did not regard Sundays as more sacred than saints’ days — and both Martin Luther and John Calvin tended to regard all days as holy. (One of the book’s surprises is that Calvin, usually regarded as the Puritans’ inspiration, denounced “crass and carnal Sabbatarian superstition.”)

The Puritans were distinctive among Protestants in tracing the holy day to the Garden of Eden and to building the Fourth Commandment (i.e., remember the sabbath day to keep it holy) into their utopian New World way of life. Even after the movement’s original zeal faded, the special place of Sunday persisted. A Russian traveler in New York City in the 1830s noted how even German immigrants, accustomed to Sunday recreation, submitted meekly to strictures of the American sabbath.

Henkin’s focus shifts from religious law to the emergence of new economic and social institutions in the 19th century. Most employers paid by the week, usually on Saturday before the coming of the five-day work week in the 20th century. For the many working-class people living in boardinghouses, Saturday is not only payday but the day for settling rents and for redeeming their precious “Sunday best” from pawnshops, only to pawn them again on Monday.

Often echoing older European and African beliefs, Americans in the 19th century also assigned special meanings to the other days of the week, as in the rhyme that begins “Monday’s child is fair of face.” Superstitions, moreover, were associated with days of the week. For example, a now-forgotten stigma branded Friday as an unlucky day for birth, for marriage or for beginning a new enterprise. (Take that, TGI Fridays.)

The week also shaped commercial rhythms. Banks in the mid-19th century still limited some transactions, like deposits and withdrawals, to certain days of the week. America’s many fraternal and voluntary associations tended to schedule weekly gatherings, while most newspapers were still weeklies. These rhythms became internalized, Henkin argues, as many Americans maintained a regular weekly correspondence schedule, sharing news with family member and friends.

It is reasonable to think that the Western week spread so rapidly around the world not only because of the obvious need to coordinate trade and communication globally, but because seven days is a mental sweet spot.

Weekly thinking was made concrete by the proliferation of diaries in which six days of the week were displayed on two facing pages, with Sundays sometimes appearing together as an appendix. Such was the continued power of Sabbatarianism, and one wishes Henkin had surveyed surviving diaries to pinpoint when Sundays were squeezed into the main sequence. But whatever the format, pre-printed diaries for planning rather than recording activities reveal how persuasive weekly planning became in business. And even in everyday correspondence: Henkin’s examination of 19th-century letters reveals that Americans wrote of their experience of time by days of the week, using expressions like “Monday last” rather than numerical dates.

The 20th century loosened some weekly customs like Saturday payday and Monday washday. But it reinforced the weekly grid in other ways, especially in the mid-century scheduling of network radio and television programs. In fact, Henkin suggests that the seven-day grid really reached a high point of coordination with pre-cable television.

That idea leads in turn to the increasingly fluid timekeeping mentalities of the 21st century. Video streaming (and bingeing) in place of the former weekly grid is one obvious instance. Even my cable menu displays days and channel schedules as continuous bands without weekly divisions.

The rise of remote work during the Covid-19 pandemic has on the one hand blurred the distinction between workdays and weekends. But on the other, many interactions that in pre-pandemic times were initiated spontaneously by phone are now set up in the hourly time blocks of an old-style weekly grid. The week has progressed in two or three centuries from quasi-religious ritual to a default view.

Henkin fulfills his goal of bringing Zerubavel’s classic up to date, with both insightful exploitation of original sources and reflections on the shifting role of the week in the digital age. Still, Henkin has omitted some important themes. The English were the pioneers of prospective business diaries. Letts of London, which survives to this day, published some of the first two-page appointment books at least a decade before the American ones cited by Henkin. Direct influence probably can never be documented, but it seems likely.

He also could have devoted some space to the New Deal’s Fair Labor Standards Act of 1938 creating the five-day, 40-hour work week that has been with us ever since, despite repeated attempts to shift to a four-day week. Henkin does note how the pandemic has reinforced trends that were already eroding the five-day, 40-hour week as a norm. More employers now are taking advantage of loopholes by outsourcing work to contractors and especially by shifting to part-time employment.

Another trend that appeared after The Week went to press is what can only be called neo-Sabbatarianism, calls for reinstating blue laws from religious conservatives (the New York Post editor Sohrab Ahmari writing in the Wall Street Journal) and communitarian progressives (the family values activist Rachel Jackson writing in Sojourners). Yet, if anything, Sundays have become even less special, as Amazon — and competitors that wish to survive in Amazon’s ecosphere — deliver packages seven days a week.

Finally, both Zerubavel and Henkin may be too quick to call the seven-day week exclusively cultural. In 1956 the cognitive psychologist George A. Miller published what has become one of the most frequently cited papers in his field, “The Magical Number Seven, Plus or Minus Two: Some Limits on Our Capacity for Processing Information.” The average person, he found, can hold only between five and nine items in short-term memory.

Imagine that months were divided into units of 10 days – most notably (in the West) during the French Revolution. The French people may have been willing to abandon centuries of traditional weights and measures for the metric system, but as Zerubavel and other historians of time have documented, they rebelled against the new calendar.

There is a far heavier cognitive load in accounting for 10 different days than for seven. In their everyday lives, Romans had a market week of eight days, with markets held on the eighth — within Miller’s range. It is reasonable to think that the Western week spread so rapidly around the world not only because of the obvious need to coordinate trade and communication globally, but because seven days is a mental sweet spot.