laurence kotlikoff, a professor of economics at Boston University, is the president of Economic Security Planning, which makes personal finance software.

You probably learned in Econ 101 that taxes and subsidies distort economic behavior, and you may have learned that the poor aren’t exempt from their impact. But dollars to donuts, you didn’t learn the half of it. Half of it? More like the thousandth of it. Read on. Imagine a country with 100 major tax and benefit programs designed by 100 committees with no knowledge of what the other committees were up to. Now suppose these committees were more responsive to lobbyists and the political fashions of the day than to solid economic research. The process would be sausage-making at its worst, and the outcome would look and smell as expected. The U.S. fiscal system, constructed piecemeal over roughly a century, fits this picture. It’s been built in a plethora of state legislatures, Congressional committees, and state and federal executive offices. And while economists have left only the lightest footprint, each and every one of these enterprises does reflect the influence of an army of lawyers. It makes about as much sense as giving economists a decisive role in deciding the outcome of constitutional law cases before the Supreme Court.

A few words of clarification here. First, in this context, Uncle Sam stands in for state as well as federal government. And the 43-cent marginal tax references both direct taxation (i.e., income taxes) and payroll taxes (mostly Social Security), and indirect, in-kind taxation arising from the loss of benefits, such as ineligibility for food stamps and Medicaid as you earn more money. Moreover, the figure accounts for the point, discussed below, that some workers save money from extra earnings, which they then invest for retirement and such, and which in turn generates higher future income – and net taxes.

A median tells us about what’s typical. While the typical U.S. worker faces this effective 43 percent tax bite, not everyone fits the category. Indeed, many workers face far higher marginal rates. And it’s probably not the folks you expect: In fact, sky-high effective rates disproportionately fall on lowincome households. A shocking one in four low-income workers faces marginal tax rates above 70 percent.

It doesn’t take a PhD to understand that very few people will voluntarily work eight hours a day, five days a week, 50 weeks a year for the pleasure of handing much of their income over to Uncle Sam. Consequently, the disincentives facing so many of the poor represent nothing less than a fiscal poverty trap. Stated differently, the proximate explanation for why poverty endures in the United States is surely fiscal work disincentives.

Yes, second-rate education, racial and ethnic discrimination, lack of connections to good jobs, the culture of poverty – all these factors tighten the lock. But if you took one million of America’s top college students graduating this year and saddled them with a 70 percent or even higher marginal tax rate, you have to wonder how many of them would decide to work as hard as we expect.

Imagine forcing every legislator, governor, president and member of Congress to take a simple exam. The test would first provide full demographic and financial information about 100 households. Then it would ask the exam-takers to estimate within 10 percentage points the marginal tax rates each household faces on earning an extra $1,000 (or an extra $10,000) this year. I guarantee you not a single one would pass. Indeed, I can say this with confidence because I, too, would fail miserably – and I’ve been working for over a decade with a team of economists and software engineers to accurately make these calculations.

Software? Yes. Our fiscal system is now so convoluted that it can only be deciphered with computer algorithms more complicated than the ones that landed Neil Armstrong on the moon. Moreover, as mentioned above, the calculation of marginal tax rates involves estimating not just the extra taxes and loss of benefits arising this year from the extra earnings, but the impact on future income from saving more for the future. For a surprising number of people, this is no small matter.

Social Security provides a good example of fiscal complexity on steroids. The system has just 12 benefit programs. But it has 2,728 rules about those benefits in its handbook and hundreds of thousands of rules about the 2,728 rules in its Program Operations Manual. To understand what you can get back from Social Security in exchange for all the FICA payroll taxes you put in, you need to understand the system’s intricate, partially wage-indexed, primary insurance amount calculation and its corollary calculations of spousal, divorced spousal, widow(er), divorced widow(er), child-in-care, child, parent, disability and disabled child benefits.

You also need to understand esoterica ranging from the family-benefit maximum and the delayed retirement credit to the Windex provision(!!) and eligibility requirements for divorcée benefits – and I’ve barely scratched the surface. There are so many rules upon rules governing Social Security that not a single person understands them all.

I know this because I asked Social Security’s top actuaries some particularly tricky questions, only to be told they needed to ask specialists on those topics. 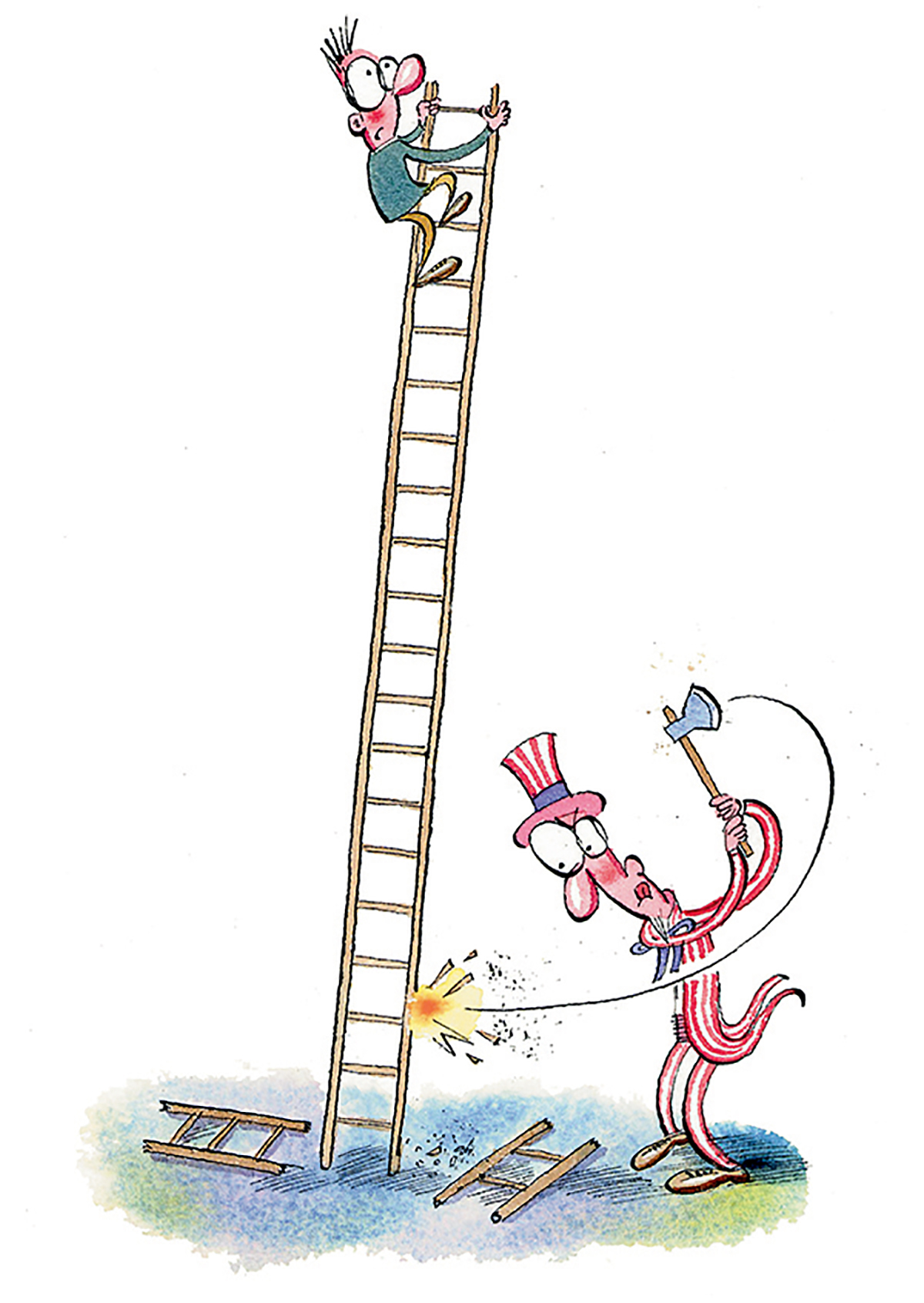 Nor can one ignore the corporate income tax. (Well, one could, but you’d miss half the fun.) You might assume that only big companies pay corporate income taxes. But the buck really stops with their shareholders, most of whom are middle-class Americans with a stake in the stock market through their retirement savings. Earning extra this year and investing some of it in stocks mean you’ll receive a return net of the corporate income tax – that is, you’ll be the proximate bearer of the corporate tax, no less than if you received your share of pretax corporate profits and had to include that income on your personal tax return.

In short, every tax and benefit, including corporate taxes, needs to be included in a proper analysis of a worker’s remaining lifetime marginal net tax rate. The research (co-authored with Berkeley economist Alan Auerbach, Atlanta Federal Reserve Bank Research Director David Altig, and Boston University economics grad students Elias Ilin and Victor Yi) underlying the marginal tax rate estimates presented here is apparently the first to capture every major tax and benefit program in the country. And it does so taking into account all state-specific provisions – provisions that materially impact most “federal” programs.

No surprise, then, that the crazy quilt of taxes and government benefits generates truly crazy work incentives. Economists have benignsounding mathematical terms for crazy in this context, such as nonlinear, discontinuous, non-convex. But the user-friendly term is kinky.

Why is this kinky? Because the graph of your taxes (and Medicare Part B premiums are a tax in all but name) against your income heads abruptly north when you pass this threshold, just as it does when you hit the Part B premium’s next five thresholds.

The marginal fiscal work disincentives facing most Americans don’t always involve abrupt increases in taxes due to earning an extra $1,000 or $10,000. You need to be close to a big kink to face the sort of humongous work disincentives I illustrated above. Moreover, only certain households are impacted by fiscal programs with kinks. For example, only one poor person in four lives in Section 8 housing. For that matter, most workers aren’t on Medicare because they aren’t old enough (age 65 is the general start age) or aren’t disabled and thus don’t face its Part B kinky premium.

But less dramatic marginal tax rates built into the law are bad enough. Take food stamps – SNAP to the cognoscenti. Earn one more dollar and lose 30 cents, at least if you live in Massachusetts. But the SNAP program and its work disincentives vary from state to state, so the SNAP marginal tax is different all over the country. How different? Ask your congressperson if they know. Let it be their learning experience.

Or consider the Earned Income Tax Credit (EITC), the federal benefit conservatives as well as liberals love to love. Depending on your earnings, it can subsidize you for working by roughly 40 cents on the dollar, provided you haven’t earned too much money to qualify. That’s the general idea, anyway. But with the best of motives, some three-fifths of the states supplement the federal EITC. For households with children, these state subsidies range from 3 to 32 percent; that is, the states can raise the EITC’s work incentive by almost one-third. After you earn a threshold amount, the cashback program freezes. So far, so good. But earn a few thousand dollars beyond that threshold and you’ll start losing 21 cents on the dollar as the EITC takes back benefits. That can be as much as 28 cents per dollar in Vermont, the most EITC-generous state.

Receive a dollar in Social Security disabled child benefits and say goodbye to a dollar of Supplemental Security Income.

The software program we used to calculate marginal tax rates is called The Fiscal Analyzer. It marries an expanded version of my software company’s MaxiFi Planner computation engine with data from the Federal Reserve’s 2016 Survey of Consumer Finances. MaxiFi Planner does many things – most importantly, giving households a better sense of how much they can spend now to assure sustainable consumption over a lifetime. But here, it cuts through the fog to generate estimates of true marginal tax rates. 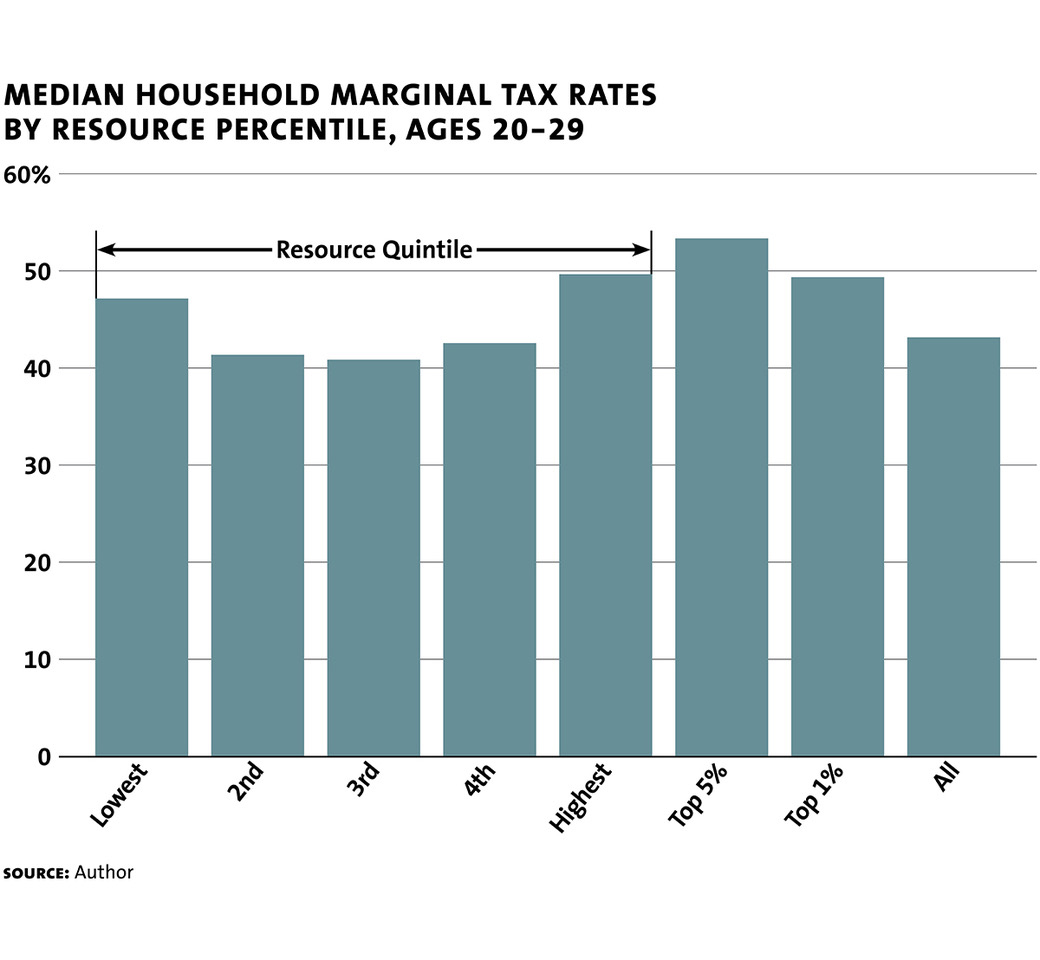 The figure above shows marginal tax rates by resource percentiles arising as a household earns an extra $1,000. By “resource” I mean a household’s net wealth plus its human wealth, where human wealth is the expected present value of the household’s future labor earnings. As discussed earlier, the overall median marginal tax rate is 43.2 percent. For the bottom and top 20 percent of the resource distribution, the medians are higher – 47.2 percent and 49.7 percent, respectively. The third quintile – those firmly in the middle – face the lowest median marginal tax: 40.9 percent.

Note an important distinction here. The fact that marginal tax rates at the top of the pyramid are not very different from those at the bottom does not tell us much about our fiscal system’s progressivity. Indeed, in a companion study, my co-authors and I show that the structure of U.S. lifetime net tax rates is highly progressive, with the median average tax rate of the bottom quintile equaling minus 46.6 percent and the average tax rate of the top 1 percent equaling 34.5 percent. These tax rates are net rates – that is, they incorporate benefits received as well as taxes paid.

The vast difference between marginal and average tax rates shows that one can’t read fiscal progressivity from the structure of marginal tax rates. For example, the reality that the EITC is phased out as household income rises (and thus creates work disincentives) is not inconsistent with the fact that it is highly progressive. By the same token, one cannot infer work disincentives from the structure of average tax rates.

Oh, there are ever more wheels within these wheels. First, that households with identical financial resources can face dramatically different work disincentives. Second, the dispersion of marginal tax rates is far greater for the poor than for the middle class and rich.

What Must Be Done

America’s fiscal system is an embarrassment. Rational leaders would never saddle us to fiscal programs that undermine productivity, that treat people in roughly similar circumstances entirely differently and that consign vast numbers of people to chronic poverty because they have little financial incentive to work.

There are, in theory, ways out of this mess – but certainly no easy ways short of starting with a blank page. For one thing, our federalist system limits Washington’s ability to impose order on state taxes or spending. For another, any reform that more or less sustained the net revenues of the system would be bound to create winners as well as losers. And potential losers have a way of stopping change cold.

Try, though, we must. Fiscal anarchy-asusual pares growth, reduces social and geographic mobility – and, as we are learning the hard way, erodes our already fragile sense of America as one nation.