james barth is a senior fellow at the Milken Institute. priscilla hamilton and donald markwardt are research analysts at the institute. This article is adapted from their research paper "Where Banks Are Few, Payday Lenders Thrive," which can be downloaded free at milkeninstitute.org.

At one time or another almost everyone borrows money, even if just a small sum for a short time. It may be for necessities, like buying milk and cereal for the kids, or for pleasure, like financing a weekend at the beach. But how many of us have paid 460 percent interest to use that cash?

The answer may surprise you. Some 12 million American people borrow nearly $50 billion annually through "payday" loans – very-short-term unsecured loans that are often available to working individuals with poor (or nonexistent) credit. The implicit interest can be up to 35 times that charged on typical credit card loans and roughly 80 times the rates on home mortgages and auto loans. On the other side of the ledger, the process is quick and convenient: a person need provide only a driver's license, a Social Security card, proof of income and a bank account number. After writing a postdated check for the loan amount, plus fees and interest, the customer leaves with cash in hand.

What probably won't surprise you is that banks and payday loan stores serve different markets. In California (one state, but probably a representative one), payday stores dominate lending to the working poor, especially those who are Latino or African-American.

It does not necessarily follow, though, that payday borrowers are being exploited, in the sense that lenders must be making monopoly profits. For one thing, the transaction costs of making these short-terms loans are high. For another, one might expect defaults to be relatively high since the loans are not collateralized and borrowers are generally poor.

But the evidence from pilot programs in which banks do compete directly with payday loan stores suggests that traditional lenders could profit handsomely at far lower interest rates than those charged by the stores. Hence the question for policy makers: why have banks left ripe fruit to be picked by payday lenders? Well actually, there's a second question: what could be done to encourage banks to compete for the business?

In the mid-1990s, the payday loan industry consisted of a few hundred lenders nationwide; today, nearly 20,000 stores do business in 32 states. Moreover, a growing number of payday lenders offer loans over the Internet. In fact, Internet payday loans accounted for 38 percent of the total in 2012, up from 13 percent in 2007. The average payday loan is $375 and is typically repaid within two weeks. But the average loan amount varies substantially from state to state, with Tennessee at the low end ($202) and Texas at the high ($533).

Back in 2006, Congress capped the interest that could be charged to members of the military and their dependents at an annual percentage rate of 36 percent. Otherwise, state regulators run the show, with maximum APRs ranging from 196 percent in Minnesota to 574 percent in Mississippi and Wisconsin.

California first authorized payday lending in 1996, and the practice is regulated by the state's Department of Business Oversight. The law allows these lenders to defer the deposit of a customer's personal check for up to 31 days, limits the maximum value of the check to $300 and restricts the maximum fee to 15 percent of the check's amount. In addition, payday lenders are barred from lending to customers who have loans outstanding with them – no doubling down. There is no limit, however, on the number of payday loans that a customer may recycle per year.

By year-end 2005, California was home to 2,445 payday loan storefronts. The industry subsequently consolidated, leaving 2,119 stores at year-end 2011. However, the total amount borrowed increased from $2.6 billion to $3.3 billion over the period and individual customers rose from 1.4 million to 1.7 million. The 12.4 million payday loans made in 2011 averaged $263, with an average term of 17 days. The legal maximum fee is equivalent to the aforementioned APR of 460 percent for a two-week loan. While there is no representative data on actual fees charged, the stores we sampled averaged close to the maximum.

Compare that APR to current rates on car loans (about 6.4 percent), credit card loans (13 to 25 percent) and subprime mortgages (5.5 percent) in California. Of course, the lenders' risks are different as well: mortgage and auto loans are secured (that is, the lender can seize the property if the borrower defaults), while credit-card and payday loans are unsecured.

The $30 charged on a $200 two-week loan may not seem especially onerous for the typical borrower. But borrowers with six or more loans each year generate over half of all payday store revenues in California. Nationwide, most borrowers are indebted to payday lenders for five months out of the year and typically shell out $800 for what amounts to a $300 revolving loan.

California accounts for about 7 percent of all the bank branches and slightly more than 10 percent of all the payday stores nationwide. A much more interesting picture emerges at the county level. The state has only one county with no banks, but 14 counties with no payday lending stores. At the other end of the spectrum, Los Angeles County has the most banks and payday lenders, with 2,120 and 521, respectively. The situation is quite different on a per capita basis: in every county but one, the number of banks per capita is greater than the number of payday lender stores per capita.

We collected demographic and personal finance data by county to see how they correlate with the location decisions of banks and payday lenders. The first thing to note is the strong negative relationship between the number of bank branches and the number of payday lender stores, adjusted for population.

It's possible this is simply the consequence of market forces – that banks and payday lenders locate where their own customers live. Or it could mean that banks are unwilling to take on the challenge of expanding into new demographic segments, in spite of the potential for profit. Either way, though, it puts residents of counties with relatively few banks at a disadvantage in borrowing. This is especially disturbing because it is likely to reduce social and economic mobility: less-banked counties are home to relatively more poor and minority households, while the populations of more-banked counties have both more education and higher incomes. 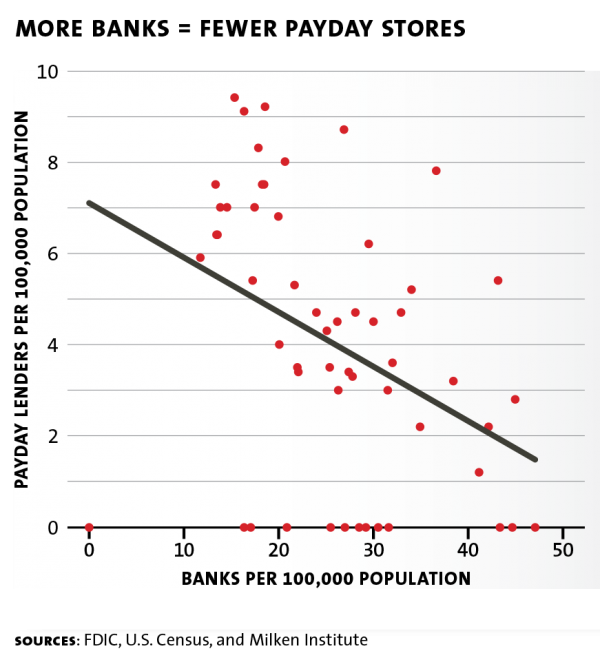 What Could – and Should - be Done

One relatively uncontroversial reform would focus on transparency. Borrowers ought to know more than how much they get from the payday lender today and how much will be deducted from their bank account in two weeks. The interest cost of using a credit card to finance $300 of debt is roughly $2.50 for two weeks and $15 for three months. By contrast, fees for a $300 payday loan are $45 for two weeks and $270 for three months. More emphasis on disclosure might lead to greater caution on the part of potential payday loan customers.

But transparency is no panacea. If the local payday lender is the only game in town and the kids are hungry, borrowers will pay what they must.

Payday lenders say that the high APRs they charge are warranted by the nature of short-term lending – the paperwork, the low volume of loans per store, etc. – as well as by the high-risk profile of low-income borrowers. Other financial institutions, they argue, have been unwilling to extend unsecured loans to borrowers with poor or no credit. And the ability to borrow at 460 percent is better than not being able to borrow at all.

Recent evidence suggests, however, that banks and other financial institutions could, in fact, provide alternative loan products that meet the needs of those now relegated to payday borrowers at lower APRs. The FDIC's Small-Dollar Loan Pilot Program has yielded important insights into how banks can offer affordable small-dollar loans (SDLs) without losing money in the process.

Under the pilot program concluded in 2009, banks made loans of up to $1,000 at APRs of less than one-tenth those charged by payday loan stores. Banks typically did not check borrowers' credit scores, and those that did still typically accepted borrowers on the lower end of the subprime range. Even so, SDL charge-off rates were comparable to (or less than) losses on other unsecured forms of credit such as credit cards. Note, moreover, that banks featuring basic financial education in the lending process reaped further benefits by cutting SDL loss rates in half.

The success of the banks' SDLs has been largely attributed to lengthening the loan term beyond the two-week paycheck window. Along with reducing transaction costs associated with multiple two-week loans, longer terms gave borrowers the time to bounce back from financial emergencies (like layoffs) and reduced regular payments to more manageable sums.

For consumers, the benefits of SDLs over payday loans are obvious. It goes without saying, though, that banks won't stay in this line of business unless, one way or another, SDLs prove to be profitable. In the FDIC pilot, a majority of banks reported that SDLs helped to cross-sell other financial services and to establish enduring, profitable customer relationships. Given the low volume of SDLs that banks extended in the programs' beginning stages, however, the profitability of SDLs as a stand-alone product line was largely untested.

Happily, this is an arena in which fresh thinking and digital technology can make a big difference. Start-ups like ZestFinance, created by Google's former chief investment officer and head of engineering, are employing big data analytics to improve on traditional underwriting models based on FICO scores.

Another newcomer, Progreso Financiero, employs a proprietary scoring system for making small loans to underserved Hispanics. Progreso's loans follow the pattern that emerged in the FDIC pilot program – larger loans than payday offerings with terms of many months rather than days and, of course, more affordable APRs. Moreover, the company has shown that the business model works at substantial scale: it originated more than 100,000 loans in 2012.

LendUp, an online firm, makes loans available 24/7, charging very high rates for very small, very short-term loans. But it offers the flexibility of loans for up to six months at rates similar to credit cards, once a customer has demonstrated creditworthiness by paying back shorter-term loans. It also offers free financial education online to encourage sound decision-making.

Both Progreso and LendUp participated in a 2010 pilot program to expand access to affordable credit in California. And both are supporting a replacement program with guidelines similar to the FDIC initiative. Sheila Bair, the former head of the FDIC, envisions SDLs becoming a staple bank product. Indeed, as banks face increasing criticism for becoming dependent on "gotcha" fees on regular consumer accounts, the time may be right to develop viable credit services for the unbanked that help to repair the industry's image.