Why Any New Third Party Should be Centrist, Liberal and Radical

ed dolan is a senior fellow at the Washington-based Niskanen Center.

A Gallup poll in February found that 62 percent of Americans thought the Republican and Democratic parties were doing such a poor job that we needed a new third party. This represents a record high, up from just 40 percent from 2003 when Gallup first asked the question. But that what kind of third party?

To realize that potential, however, a new centrist party would have to offer more than just “moderation,” if that means nothing more than some pollster-designed, watered-down triangulation between what the GOP and Dems now offer. In my view the new party should be not just centrist and liberal, but also radical.

In the American political idiom, “liberal” has long been used as the opposite of “conservative.” However, as “progressive” finds increasing favor with the left, liberal is being freed to serve its classical meaning of a political philosophy congenial to personal freedoms and a market economy, with a strong commitment to inclusiveness and equality.

Liberalism in that sense is not just a loosey-goosey aspiration. It is a tried-and-true approach to government that is widely used in the world’s freest and most prosperous countries. We can show that by assigning countries a liberal rights score based on the extent to which they respect the rule of law, property rights, integrity in government, personal freedoms and procedural democracy.

The figure below plots 164 countries by their incomes and the strength of their liberal rights practices. The 20 richest democracies in the world are highlighted in red. The green dots are generally illiberal states wealthy in oil and gas. The blue dots are all the other countries.

Note that the US rates a red dot, but just barely. Although it is more liberal and democratic than wealthy petrostates like Kuwait and Saudi Arabia, it is near the bottom among the 20 countries in its peer group. Bringing America’s actual performance as a liberal democracy up to our self-image as a beacon of freedom and prosperity should be the number one plank in the platform of a new centrist party. 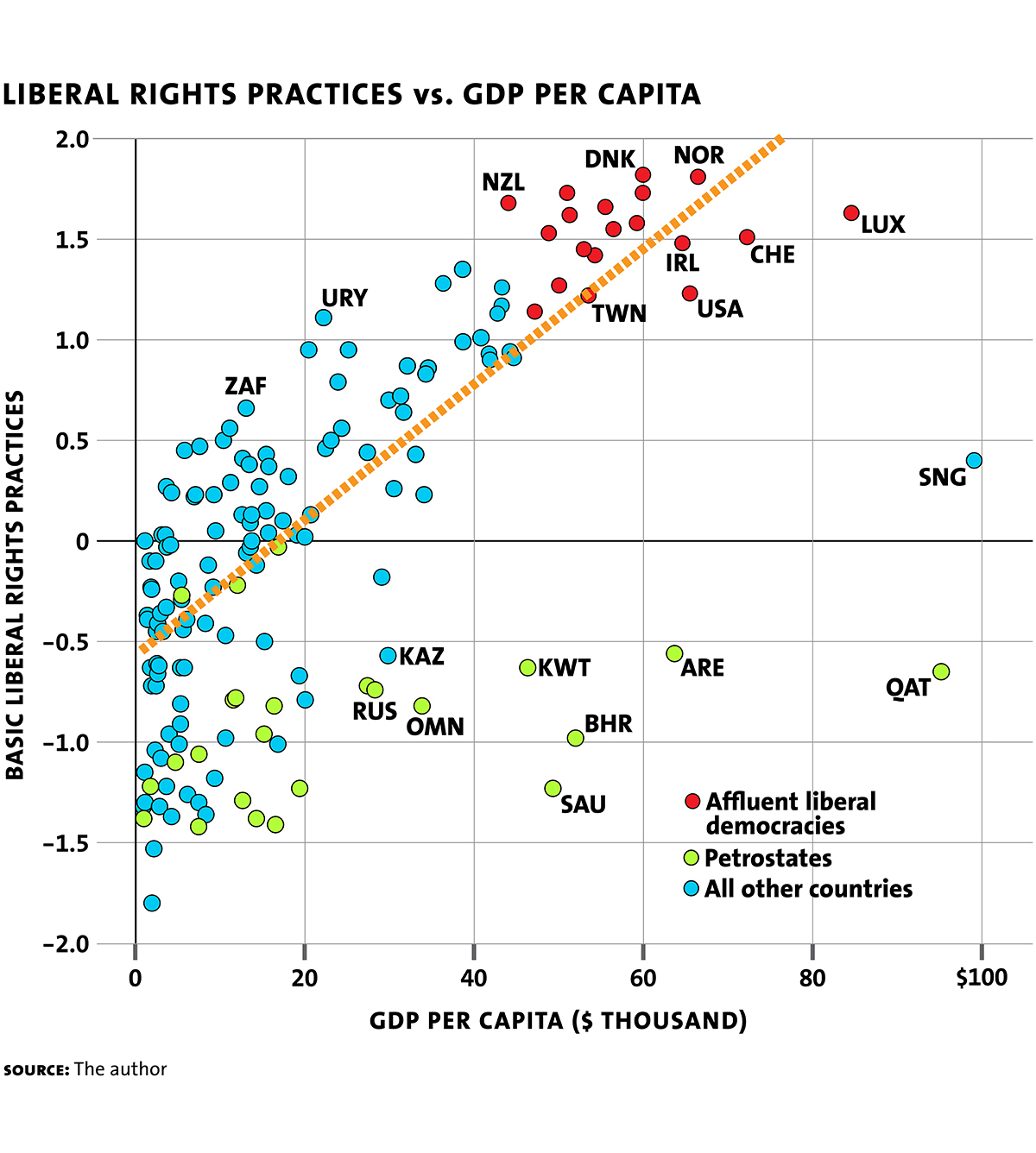 It is not hard to find what is holding down America’s rating for liberal rights. The impediments are the very things that make the headlines every day. It would take more than timid tinkering to fix them.

Tired of reading about mass shootings and unjustified use of force by the police? We need radical reforms to raise our low score for rule of law. Outraged by brazen voter suppression? Strong action on voting rights would raise our lagging rating for procedural democracy. Unhappy with the state of race relations? America’s ranking for discrimination falls far short of the average for its peers.

Rule of law, personal freedoms and democracy are central tenets of liberalism, but a new centrist party should also dedicate itself to equality if it wants to make liberal rights for all more than a formalism. When we look at the numbers, it turns out the United States has a long way to go in the equality department, too.

Among economists, the gold standard for measuring equality is the Gini Index. The index runs from 0 to 100, with higher numbers showing a greater concentration of wealth and income at the top — that is, less equality. Of course, no country actually hits 0 or 100, worlds in which all the wealth is divided equally or captured by one person. Data from around the world show Gini indexes that range from the mid-20s for the most equal countries, which are mostly in Europe, to the 60s and 70s, for the least equal, found mostly in Africa and Latin America.

Measuring equality of income distribution is tricky, however. Some of the most widely cited numbers, such as those from the World Bank, pretty clearly underestimate the share of income earned by the very richest households. In a recent study for the Brookings Institution, Laurence Chandy and Brina Seidel provide a new set of Gini estimates that adjust for such underreporting. The figure below plots their Gini data against liberal rights scores for 123 countries. 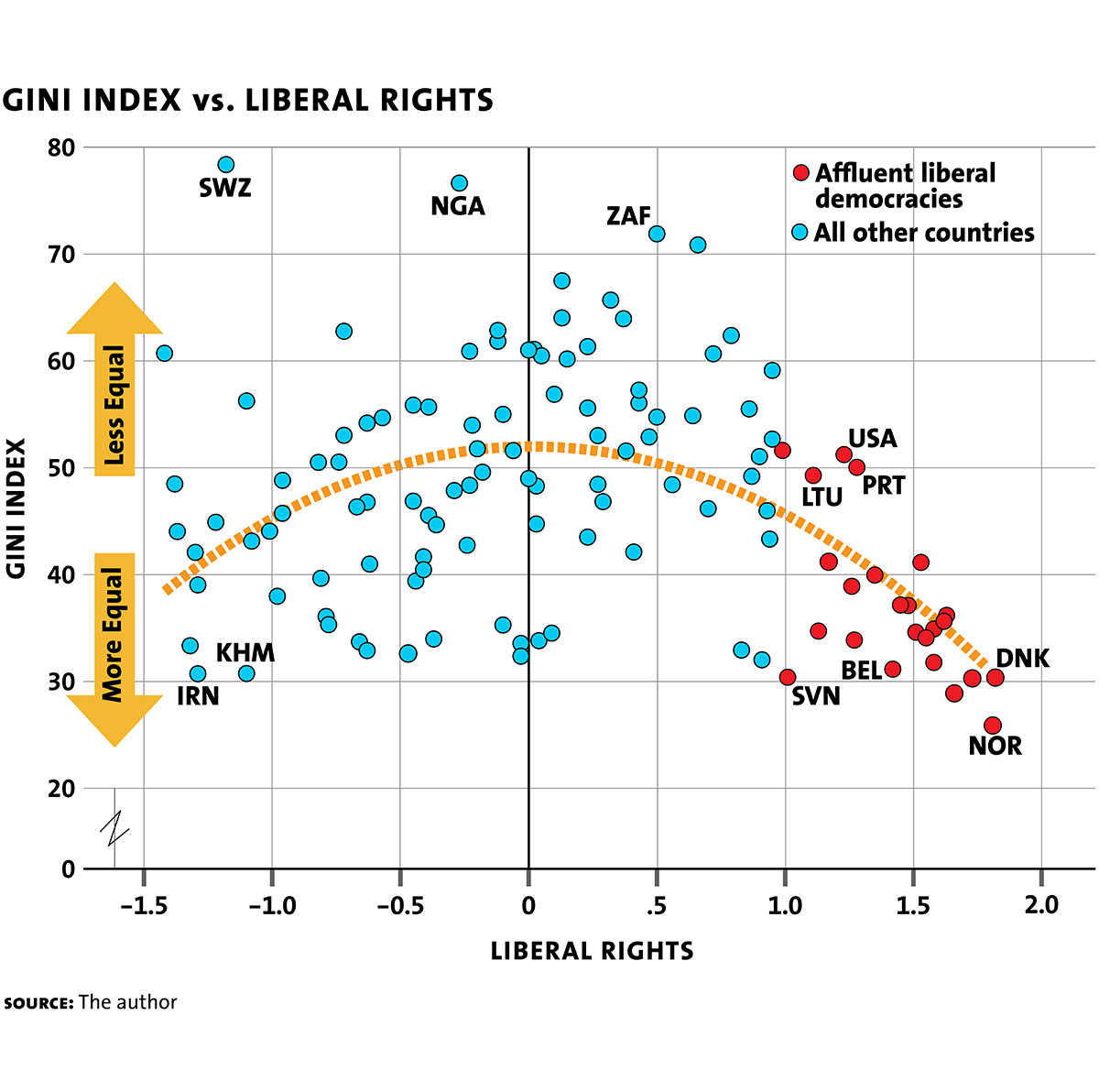 The broad scatter of blue dots on the left half of the chart show that illiberal countries vary widely in their income distributions, from extremely unequal Eswatini (formerly Swaziland) to highly equal Iran and Cambodia. The arched trendline shows that for the world as a whole, countries in the middle zone between highly liberal and highly illiberal tend to be a bit more unequal than those at the extremes. The most liberal countries (shown in red) are more tightly clustered. There is a strong tendency for the most liberal countries within that group, like Denmark and Norway, to also be among the most equal.

The United States, with a Gini index of 51, is near the middle of the global ratings. However, among the highly liberal democracies, it is a less-than-equal outlier, farther above the trendline than any other country in its peer group. Clearly, there is work to do.

A centrist liberal party would need to do more than fund existing welfare programs more generously. Instead, those programs would need a radical overhaul. Above all, they should be made more work-friendly. At present, they impose daunting penalties, in the form both of taxes owed and benefits reduced, on workers just above the poverty line.

It is cruel that the very people who are just on the threshold of earning their way to self-sufficiency are the most disadvantaged by the poverty trap created by traditional welfare. In an essay, “A Social Safety Net for an Age of Uncertainty,” I outlined common-sense reforms that fix this by consolidating programs and closing gaps with no increase in overall anti-poverty spending.

Improved income support is just the start. It needs to be supplemented by policies that boost education (including early childhood education) and the kind of job training that would promote inclusive growth. Finally, universal affordable healthcare would not only improve equality directly but would also lead to a healthier, more productive labor force. With proper program design, all of that, including universal healthcare, could be realized without raising overall government spending.

Centrist, but Not Moderate

To put it all together, then, a new third party is unlikely to succeed unless it aims for the center, because that is where the largest bloc of dissatisfied voters is to be found. By the same token, it should be liberal in espousing good government, personal freedoms, broad-based democracy and a strong market economy. And it should be radical, attacking America’s shameful inequality with new ideas — not on trickle-down nostrums or welfare-statism.

I know what you’re thinking. This platform for a new party may be practical and may align with the wishes of a plurality of Americans. But the impediments — the dumbing-down effect of social media, the anti-democratic distortions built into federal elections and the immense power of vested interests, to mention just a few — are truly daunting.

Yet that can’t be the end of the story. I prefer to believe that change in the name of democratic principles is still possible. The alternatives are very, very grim.