A review of The Story of Work: A New History of Humankind 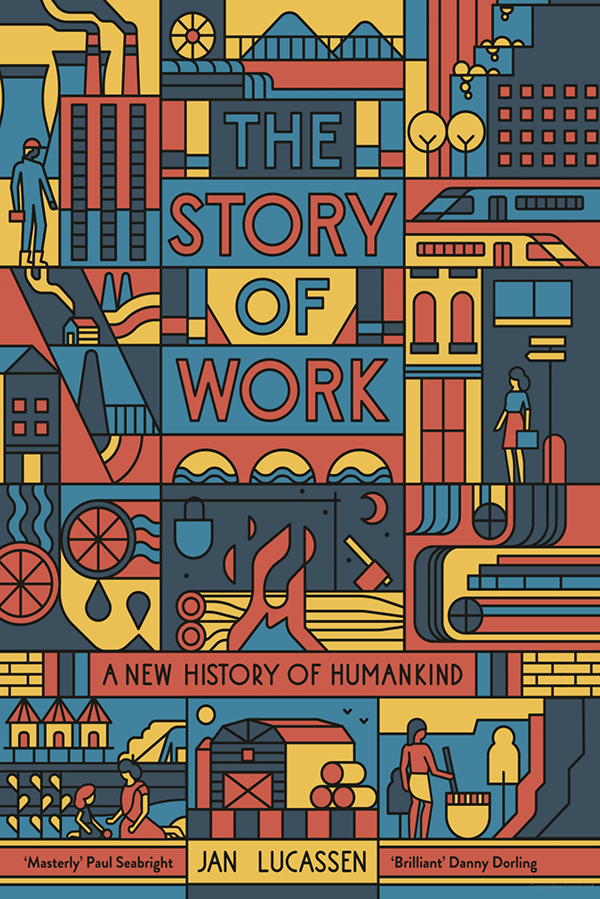 The Story of Work: A New History of Humankind

For those not keeping score at home, the Big History genre came of age when Bill Gates introduced the Australian historian David Christian at the TED 2011 conference, and then worked with him to inspire a global school curriculum. Along with Christian’s pathbreaking Maps of Time (2005), the prolific works of the Czech-born Canadian environmental scientist Vaclav Smil (another Gates favorite) have revitalized historical study on a grand scale. Smil made his name by centering his histories on the role of energy as the globe teeters on climate catastrophe.

Jan Lucassen, a Dutch historian, may not be quite as breathtakingly ambitious as Smil, whose most recent title is How the World Really Works: A Scientist’s Guide to Our Past, Present and Future. But Lucassen does have an encyclopedic knowledge of how Homo sapiens has labored in the last 700,000 years. And he has also had the good fortune to write at a time of sweeping workplace changes, brought on by pandemic. The result is a uniquely long-term perspective on a question that has perplexed employers and workers alike since March 2020: does the rise of remote work portend a radical change in the workplace?

Lucassen’s answer depends on his framework, which departs from the great majority of sweeping world histories.. One form of Big History, rarely practiced, is one-way decline — as in the Eurocentric view that Greco-Roman antiquity was a golden age of abundance, health and no strenuous work. Humanity went straight to hell thereafter and, when Covid-19 struck, was living in an Iron Age with no prospect of regaining Arcadia.

Lucassen says this rosy view doesn’t fit hunter-gatherer societies, which prevailed for most of the 700,000-year history of Homo sapiens — that is, until about 12,000 years ago. Not everybody sat around the caves at Lascaux debating what to paint next; predators, illness and violence kept them busy. But Lucassen does acknowledge the positive side of such cultures: relative equality, a commitment to mutual aid (especially in child-rearing), and shorter work hours — eight per day for men, 10 for women — than in the societies that came after.

It is easy to get lost in the rise and fall of societies that Lucassen examines. What makes his book so original is his resistance to a grand narrative. For instance, in the 19th century, narratives that sought to explain society emerged around the immiseration of workers, as population inevitably overtook resources (à la Thomas Malthus), or, conversely, the progress from forced labor of varying extremes to libertarian market society — “from status to contract” in the phrase of the Oxford professor of legal history Sir Henry Maine.

Lucassen, for his part, is neither utopian nor dystopian, nor a devotee of repeating cycles. Rather he sees the history of work as an unpredictable alternation of work arrangements dating back to Mesopotamia, from 2,000 to 1,000 BCE — a world of employers, employees, the self-employed and forced labor.

Ancient Egypt, for example, was what Lucassen calls a “tributary-redistributive society,” in which everyone in effect worked for a divine ruler. (The maverick interwar Viennese Marxist philosopher Otto Neurath thought this was the best way to run industrial societies, too.) Technological and political change can revive old work arrangements in new guises, for example, the return of slavery in Nazi and Soviet concentration camps and in convict leasing in the post-Civil War American South.

Lucassen sees the history of work as an unpredictable alternation of work arrangements dating back to Mesopotamia, from 2,000 to 1,000 BCE — a world of employers, employees, the self-employed and forced labor.>

The Story of Work is more than an encyclopedic view of variations on ancient themes, of steps forward and back. It is also an excellent guide to thinking about several issues the pandemic has raised.

The first is the future of the division of human time between work and leisure. Our present, approximately eight-hour day is roughly equivalent to that of the hunter-gatherers. The 40-hour week, a goal of the labor movement in the early 19th century, has remained virtually frozen for decades despite occasional experiments. In 1930, John Maynard Keynes predicted in his essay “Economic Possibilities for Our Grandchildren” that by 2030 the work week would be reduced to 15 hours. Sixty years ago, the political scientist Sebastian de Grazia published a report sponsored by the Twentieth Century Fund. Of Time, Work and Leisure examined the paradox that despite automation, people had less unscripted time, in part because of commuting and the rituals of consumption.

De Grazia was thinking of the classical ideal of cultivated leisure, the embrace of the arts and sciences with no economic motive. While most of the ancient philosophers thought this activity reserved for landowning gentlemen, America’s founders believed that knowledge was within the reach of all. Thomas Jefferson wrote to St. John de Crèvecœur in 1787 that “ours are the only farmers who can read Homer.” Whether or not they could, the notion of a learned working farmer would have seemed bizarre to Plato and Aristotle.

Lucassen has provocative ideas on the persistence of century-old working hours. The contemporary networked world is creating demand for new sorts of employees: computer security professionals, support technicians and “auditors of auditors of auditors”— vertical layers of supervision that multiply as organizations expand. Lean organizations may be illusions, he suggests, as bureaucracies and sometimes almost everything else are contracted out. The Dutch technology giant Philips has shrunk from a half million employees to 37,000 in the past half century using this strategy.

Lucassen offers a second explanation for the growth of new job categories as old ones are automated: “our essential need to work.” Running through his book is the thread that work exists not only to support material output, but for the self-esteem and respect from others that it produces. He cites research by an American sociologist, Beth A. Rubin, suggesting that despite greater insecurity and lower opportunities for advancement, millennial workers were surprisingly positive about their jobs 10 years ago.

Today, remote work has changed all that. As a recent New York Times feature on the importance of work friends for people in their 20s found, many are expressing “an irrefutable loneliness in all this talking through screens.” Indeed, another related implication of Lucassen’s big history concerns the future of remote work.

He found evidence across thousands of years that cooperation and trust are essential elements of all work arrangements, and he is skeptical that it can be maintained in the remote work environment that arose during the pandemic. This point was reinforced recently by the Harvard policy analyst Arthur C. Brooks, reviewing studies of Zoom fatigue in the Atlantic. Because they are inaccurate means of establishing contact with others, Brooks concluded, “video-based technologies … make the realest part of life — human interaction — feel fake.” One other study cited by Brooks found that focus on screens, as opposed to focus on the physical presence of colleagues in a room, inhibited the development of new ideas in groups. And as Lucassen notes, the ability to contract remote work to the lowest bidders globally with apps like the Amazon Mechanical Turk are less a step forward than a return to the bad old days of cottage labor.

Despite the formidable scholarship and range of The Story of Work, it largely omits one of the most intriguing sides of the 20th-century workplace: corporate experiments attempting to fuse profits and worker well-being. Some of these have been cooperatives, like the still-flourishing Mondragon system of nearly 100 cooperatives with 80,000 workers in Basque Spain, or Kellogg’s successful yet abandoned experiment with the six-hour day during the Great Depression. While the deficiencies of today’s hyperflexible business order and its precarious employment terms are apparent, we also need to understand the apparent failure of the Cold War corporate paternalism that preceded them. Too often, we look back nostalgically at organizations that were widely considered stifling and bureaucratic at the time.

Big History, like conventional little history, offers many cautionary tales but few obvious signposts forward. So far, most office workplace innovations have increased both surveillance and inequality, as the social psychologist Shoshana Zuboff has documented. Yet the power of cooperation and engagement in a shared goal could give a decisive advantage to new forms of work organization that could harness them. While The Story of Work proposes no such innovation, it is an indispensable reference that belongs on the bookshelf of all would-be organizational innovators.